A look into the world of freight trains 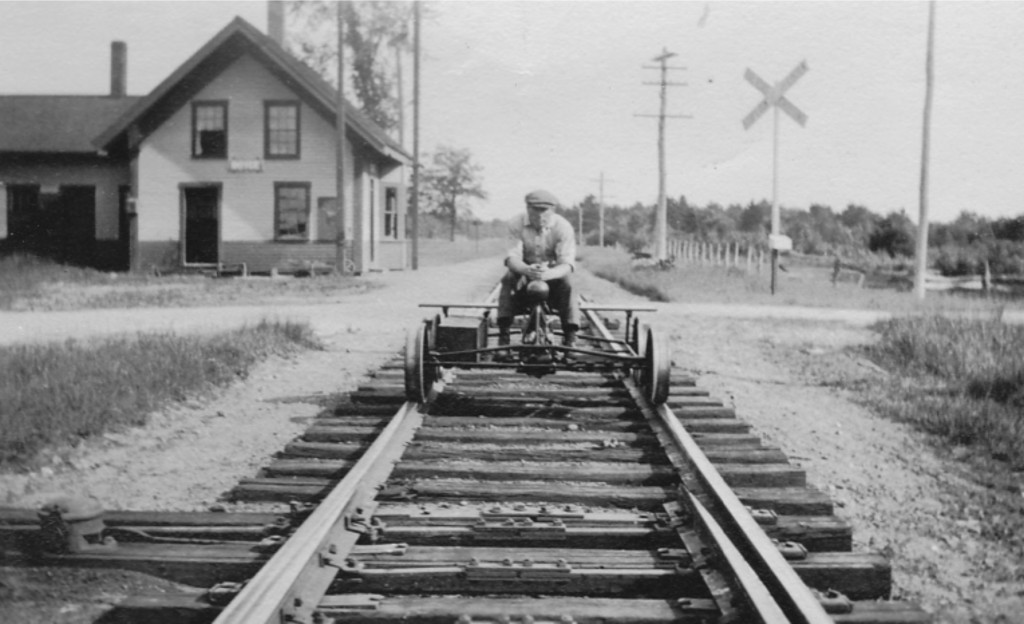 I heard the whistle blowing on a northbound freight train and hopped aboard without a ticket. That makes me a hobo, doesn’t it? The New England Southern Railroad moves freight and doesn’t take passengers, but I know the owner, Pete Dearness, and finagled a ride. Whereas hobos and freight trains used to be commonplace, neither are seen much anymore. In fact, freight trains are now such a rare occurrence that people sometimes line up at road crossings to cheer and take pictures of what was once a daily sight. The engineer blows the whistle at these crossings, and it sounds like adventure, both lonesome and exhilarating.

We rumble past the site of the former Boyce Depot Station in Canterbury, where stationmaster Arthur Rogers once shipped and received freight. Rogers had a piston hand-pump railroad cart for chugging up and down the line to check on track conditions. Old photos suggest Rogers had some formidable forearms and biceps from pumping this buggy, and from handling wooden crates containing everything that moved by freight train when everything moved by freight train. A journal entry indicates that Rogers fed the hobos passing through, partly out of compassion but also so that they wouldn’t raid his vegetable garden. Boyce Depot was the Rogers family home until it burned down in 1940. An old newspaper clipping describes how Rogers and his family escaped the fire through a second-floor window when he lowered his wife down by her arms and then tossed their children out for her to catch. 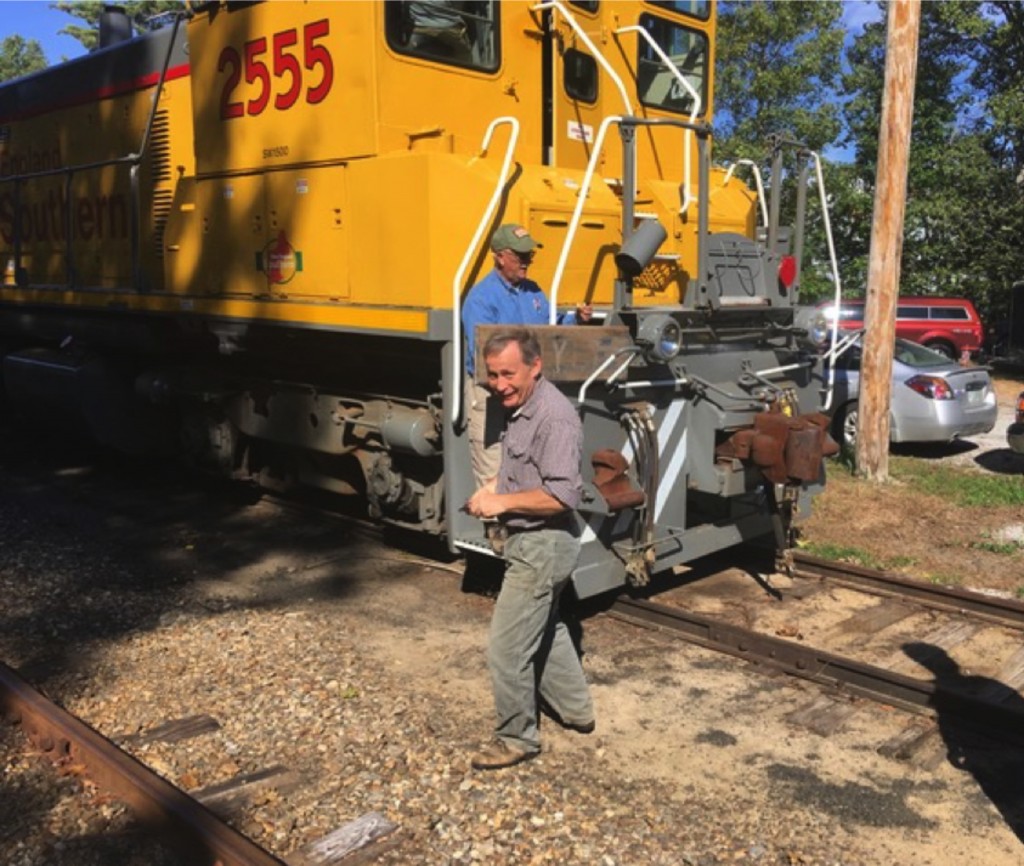 Marshall Hudson, part-time hobo, gets an up-close-and-personal look at the cab of the New England Southern engine. Photo by Marshall Hudson

The New England Southern Railroad is the state’s oldest short-line railroad and leases the track that runs from Concord and points north. New England Southern was formed in 1982 when Peter Dearness, an experienced railroad man, won the contract. Hoping to also operate in western Massachusetts, Dearness named his company New England Southern, and the NES acronym turned into the nickname “Nessie,” complete with a Loch Ness-like monster painted on one of the engines. At its peak, NES employed 22 full-time staff and ran more than 2,400 carloads annually, hauling everything from cattle feed to utility poles. However, in recent years, the line has lost many of its customers as industries such as paper mills closed or shifted to trucks. Moving freight by truck is more independent, but if you have a lot of heavy loads to move, trains can be more economical.

On my ride today, the freight is no ordinary load — we are moving the New Hampshire Army National Guard. We are pulling 67 flatcars loaded with National Guard trucks, trailers, Humvees and other equipment, all painted jungle green or desert camo, and chained down waiting to be sprung at our destination in Canterbury. When we reach the offloading yard, the flatcars are separated into groups of five, as that is the maximum number the two-siding off-loading ramps can hold. There is no shuttle engine at the yard, and our train cannot turn around, only run back and forth, so a well-thought-out unloading plan needs to be implemented.

The flatcars on the sidings need to be pointed in the direction of the National Guard trucks so that the trucks can drive off the end of the train without backing up the length of the train and down the ramps. Five loaded flatcars cut from the train are moved onto the westerly siding and five more onto the easterly siding. As the flatcars are emptied, the engineer removes them and replaces them with five more to be unloaded. It is a brain-teaser puzzle how they keep the unloaded cars out of the way of the loaded cars sharing the same track, and not inadvertently end up with the engine boxed in on the wrong end of a line of flatcars. Not to mention it’s all done while continually switching back and forth across the mainline to the easterly and westerly sidings.

I’m in the cab watching the engineer work the throttle and brakes, while hundreds of feet away a conductor on the ground is radioing back to the engineer to back up a foot, which he does, pushing tons of steel with zero visibility. There needs to be trust, coordination, and good radio communication between the two men as the weight, momentum and length of train means that it doesn’t stop on a dime. Conductor Paul jumps on and off the engine and sets brakes, hooks up or releases cars, throws track switches, changes flag colors and radios to engineer Jesse to stop in 30, 20, 10, 5, 4, 3, 2, 1 feet. Jesse is completely blind to what is going on down the line, and he must rely on Paul’s signals, but he stops perfectly without banging hard into the concrete off-loading dock. 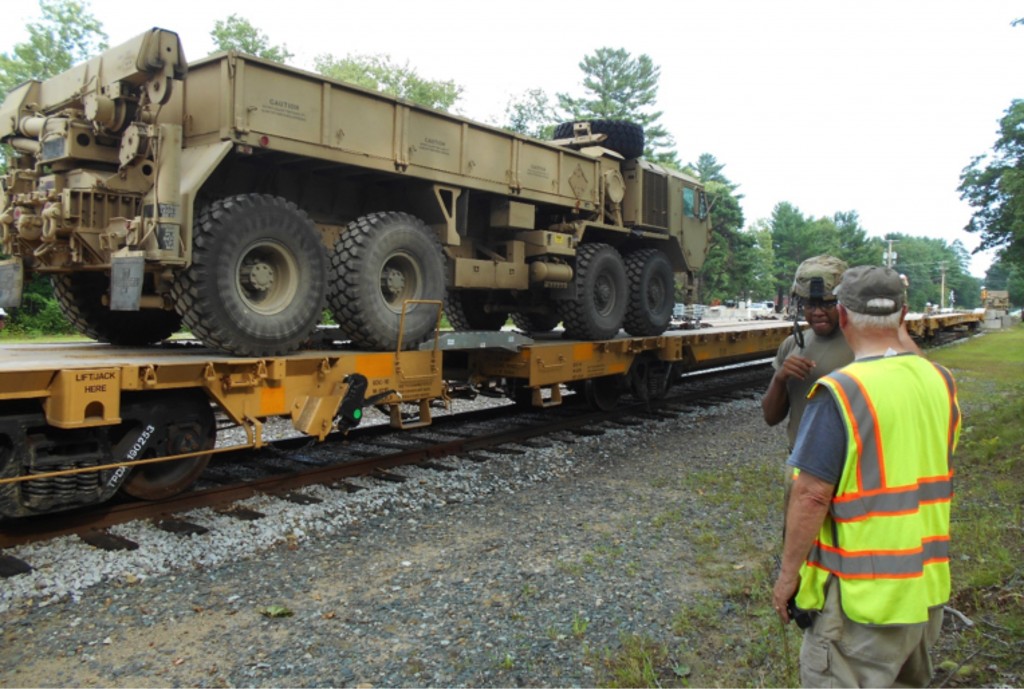 A wide-rig military vehicle drives the length of the train to the off-ramp. Photo by Marshall Hudson

Specialty bridging ramps are installed, connecting flatcar to flatcar so that the trucks can drive the length of the train and off the end. These bridges must be removed before the empty flatcars are towed out of the way, which makes room for the next loaded cars coming in. The back-and-forth shuttling and setting of these bridges must be done perfectly or trucks could end up nosedived between flatcars. Vehicle operators driving the length of the train can’t always see the bridging ramps beneath them, and must trust that the ramp was properly placed and rely on spotters in traffic vests to keep from driving over the edge. The irony of soldiers wearing camouflage and high-visibility reflective vests at the same time is not lost on me.

A dead battery, misplaced key or flat tire will stall everything, so a contingency plan is in place. New Hampshire Army National Guard mechanics with jumper cables, air compressors and key cutters are hustling to stopped vehicles to get them moving again. Batteries get jumped, padlocks cut, tires inflated and the Army goes rolling along. Off-loaded vehicles are marshaled in a staging area, where convoys are organized, drivers assigned, and fueling, final checks and paperwork are completed. Multiple convoys start rolling out heading both north and south in an Army “hoo-ahh” moment.

Time is money, and the flatcars are rented — not owned — by NES. NES has a tight schedule for moving and unloading the National Guard vehicles, and then returning the empty flatcars. Delays have put things behind schedule, so everyone is hustling. Safety still takes priority as people scurry about the yard as trucks come off the sidings on both sides of the track, loaders move bridging ramps about, and the train engine shuttles back and forth with empty and loaded flatcars on both sidings. Hard hats, high-visibility safety vests and Army battle helmets are common. Peter Dearness hands me a safety vest, but I’m staying out of the way of this controlled chaos.

With the Army National Guard unloaded, the engineer gathers up the empty flatcars scattered about in groups of five, and assembles them into a long, continuous train to be pushed into Concord. When we cross over a local road and the lonesome whistle blows again, I hand in my safety vest and hop off. I’m headed home to put hobo onto my resume.