A local legend lies beneath the water 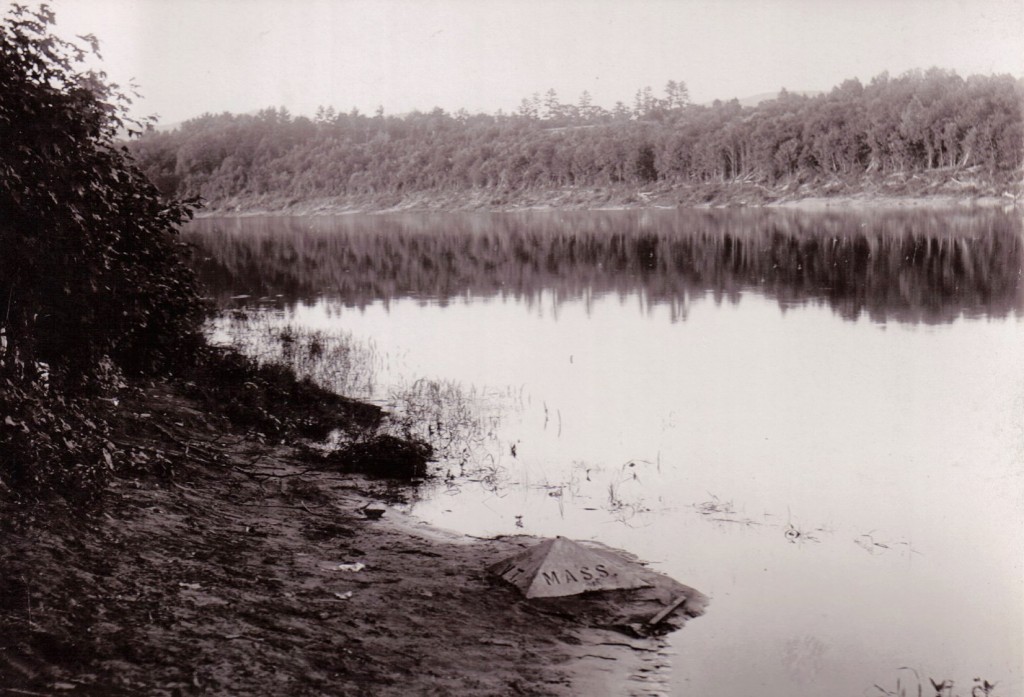 The New Hampshire Mud Turtle is so elusive that few people can honestly claim to have seen it. Its home is in the muddy bottom of the Connecticut River beneath 3 or 4 fathoms of water. It hasn’t been up to the surface in decades. But I’ve seen it. I not only saw the Mud Turtle, I rode it.

The Mud Turtle resides in the southwesternmost corner of New Hampshire at the singular pinpoint where New Hampshire, Vermont and Massachusetts collide. At that solitary point, a granite bound exists, curiously named the “Mud Turtle Monument” in a US Supreme Court decision. The odd nickname comes from the pyramid-shaped top of the 12-foot-tall granite monument that sank out of sight when accumulating river mud and silt buried it. As the river waters rose around the granite bound’s up-thrust snout, someone thought it had a turtlelike appearance, and the unusual moniker for the tristate boundary marker was born.

The point now marked by the sunken Mud Turtle monument was first determined on April 6, 1741, by surveyor Richard Hazen, who was tasked with running the state line bounding Massachusetts with New Hampshire and Vermont. Hazen and his survey party blazed the line, setting stakes, marking trees, and erecting piles of stones at certain prominent points. Despite conflicting surveys in 1825 and 1827, Hazen’s line stood as the legal boundary because neither of the later surveys was acceptable to all the states involved. But all three states had concerns about the accuracy of Hazen’s work.

To address the conflicts between the surveys, in 1891 the legislative bodies of the three states authorized the appointment of a boundary commission to resolve the discrepancies between the 1825 and 1827 surveys and Hazen’s work of 1741. A group of surveyors under the direction of Professor Elihu Quimby of Dartmouth College was assigned the task. Quimby decided to run the state line from the established and accepted northwest corner of Massachusetts eastward, back toward the Connecticut River to where Hazen had marked the corner a century and a half earlier.

Quimby’s survey confirmed the location of the tristate corner and, in 1895, the point was marked with a 2-foot-square, 12-foot-tall granite pyramid, sunk in a bed of rubble masonry 8 feet below river bottom. The initials of the three states were engraved on three sides of the monument. On the fourth side, the date 1895 was engraved. The monument was placed at the low-water mark on the west side of the Connecticut River defining the exact spot where New Hampshire, Vermont and Massachusetts converge. Because of the difficulty in observing the Mud Turtle bound, measurements for the submerged monument’s exact location were then recorded on a polished brown granite reference bound, set above the floodplain, some 582 feet west of the actual tristate corner.

The New Hampshire Legislature appropriated funds in 1900 for a photographer traveling with a horse and buckboard to take pictures of all the state line bounds along the New Hampshire/Massachusetts border. In the course of his work, the photographer took pictures of both the Mud Turtle monument and the reference bound located westerly of the submerged true corner. Whereas only a few photographs of the Mud Turtle bound exist, the polished granite reference marker is a popular spot for photographers, perambulators, history buffs and surveyors, and many pictures of it exist. 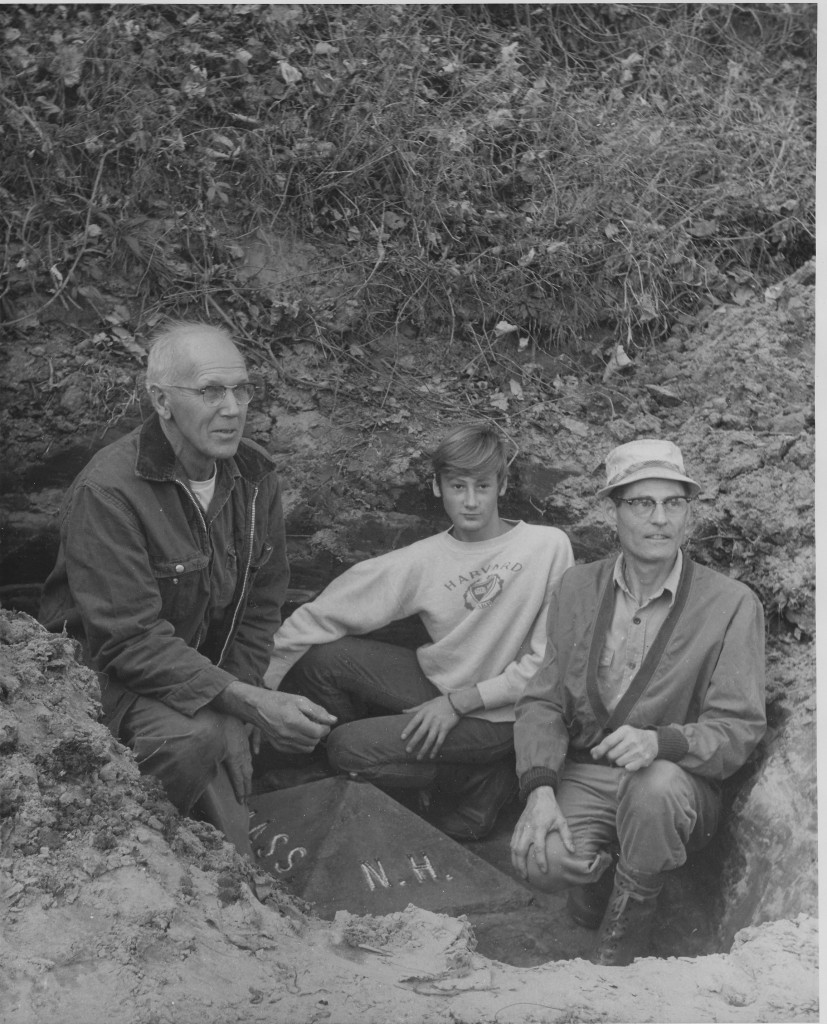 The Mud Turtle as it was last seen in 1969 when (L-R) Willis Parker, Paul Murray and Ernest Murray dug it up during a river drawdown. Photo Courtesy of Mr. & Mrs. Ernest Murray

In 1905, the timber crib dam at Turners Falls, Massachusetts, was replaced with a concrete dam, and the elevation of the dam was raised, which extended the impoundment upriver. By 1915, flashboards had been added onto the top of the dam further raising the water level and extending the artificial impoundment up to the confluence with the Ashuelot River in Hinsdale. These dam modifications resulted in sinking the Mud Turtle deeper and deeper below the surface of the water.

The Mud Turtle monument found recognition and fame in 1933-36 when the US Supreme Court settled the long-running border dispute between New Hampshire and Vermont. Conflicting claims had cast legal doubts as to precisely where the state boundary line was located at the Connecticut River. The Supreme Court determined that New Hampshire owned the river as far westward as the low-water line on the Vermont side. The court decreed that a survey should be made with boundary markers placed along this westerly low-water line. The required survey would start at the Mud Turtle monument and proceed northerly. By citing “Mud Turtle” in the Supreme Court documents, the nickname was written into law and became more than just a local legend.

In 1969, the Mud Turtle made a rare appearance briefly when the Turners Falls Dam underwent some construction repairs. Upriver dams held back-river flows, and the plug at the Turners Falls dam was pulled, releasing the impounded water and draining the mighty Connecticut River down to a shallow muddy stream.

My family had a dairy farm in Hinsdale in 1969 with a pasture along the banks of the river. Fenced on three sides, the fourth side was the river and was left unfenced to provide drinking water for the cows. Normally the cows never strayed far out into the river, but with the river suddenly drained, the herd had walked down the dry riverbed and were scattered across three states. While rounding up the strays, we saw three men on the Vermont side digging a hole in the muddy river bottom. Working from the measurements on the reference bound, they had located the Mud Turtle, which hadn’t been seen in six decades.

I took a turn climbing down into the hole, and straddled the slippery top of the tristate monument. Astride the Mud Turtle, my left leg was in New Hampshire, my right in Vermont and my hands in Massachusetts. Not only had I seen and ridden the elusive Mud Turtle, but I had also been in three states at the same time. With bragging rights firmly established, we gathered up
the escaped cows and drove them back into New Hampshire.

A few months later, the construction repairs at the dam were completed. The floodgates were closed, upstream water was released, and the water level rose. The Mud Turtle returned to its hiding place beneath the bottom of the river, where presumably it remains to this day, anchoring the three states together and wondering when it will see the surface again.