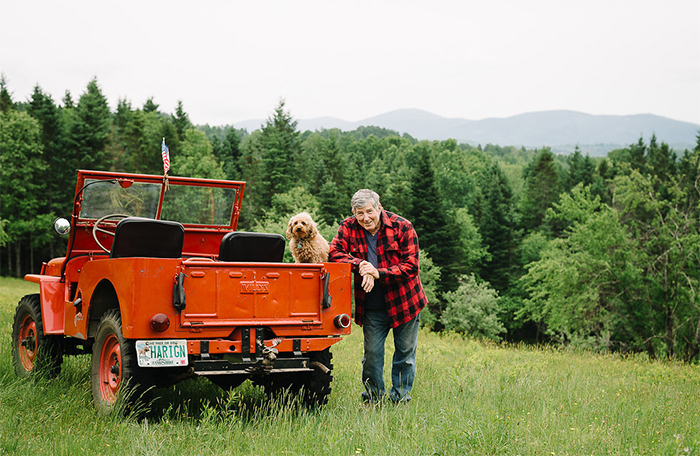 North Country newspaperman John Harrigan, who was once likened to the Old Man of the Mountain, died last week. He was, to borrow a phrase from a biography of another local notable, “One New Hampshire Institution.” John did try to leave once, but after a year in New Mexico he came back, at first to the Merrimack Valley, where he rose through various newspaper jobs at the Nashua Telegraph and the New Hampshire Sunday News. An inflection point came in the ‘70s when he was offered a position at the Boston Globe, straight from the editor. He no doubt understood that the offer meant a rare opportunity to refine his native skills in the crucible of a big-city newsroom, but John had a profound attachment to small-town New Hampshire such that even living in Manchester was hard on him. If he accepted the position, he foresaw himself working hard all year just so that he could spend his two weeks’ vacation at home in Coös County. The thought made him pack his bags and head back up Beyond the Notches. Even when he recalled the episode decades later, I could still see shades of regret and self-doubt looming in his eyes. 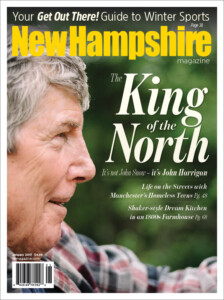 Read “King of the North“, the cover story from the January 2017 issue of New Hampshire Magazine, written by Anders Morley, featuring John Harrigan.

I didn’t meet John until I was assigned to write about him by the editor of this magazine in the spring of 2016. Although I had known his name since the mid-‘90s, when as a high schooler I became vaguely aware of the contents of newspapers, it wasn’t until I was in graduate school in New York City, experiencing an intense and physical homesickness, that he assumed a meaningful shape in my imagination. It so happened that I was studying the origins of cultural nationalism and had a special interest in how place shapes identity. New Hampshire wasn’t quite a nation, but from the vantage of my Manhattan apartment it certainly seemed like a different country. When on trips home I sometimes came across John’s column or heard him on the radio airing his strongly held and frequently eccentric opinions, I thought I heard, through the thin voice and upcountry accent, a representative of a little forest nation called New Hampshire. I was reading Donald Hall around the same time and encountered his characterization of an ideal New Hampshire type called Rusticus who “lives where he does because he wants to” and “prefers land, place, family, friends, and culture to the possibilities of money and advancement.” Later it would occur to me that John Harrigan was a kind of Rusticus as public figure. 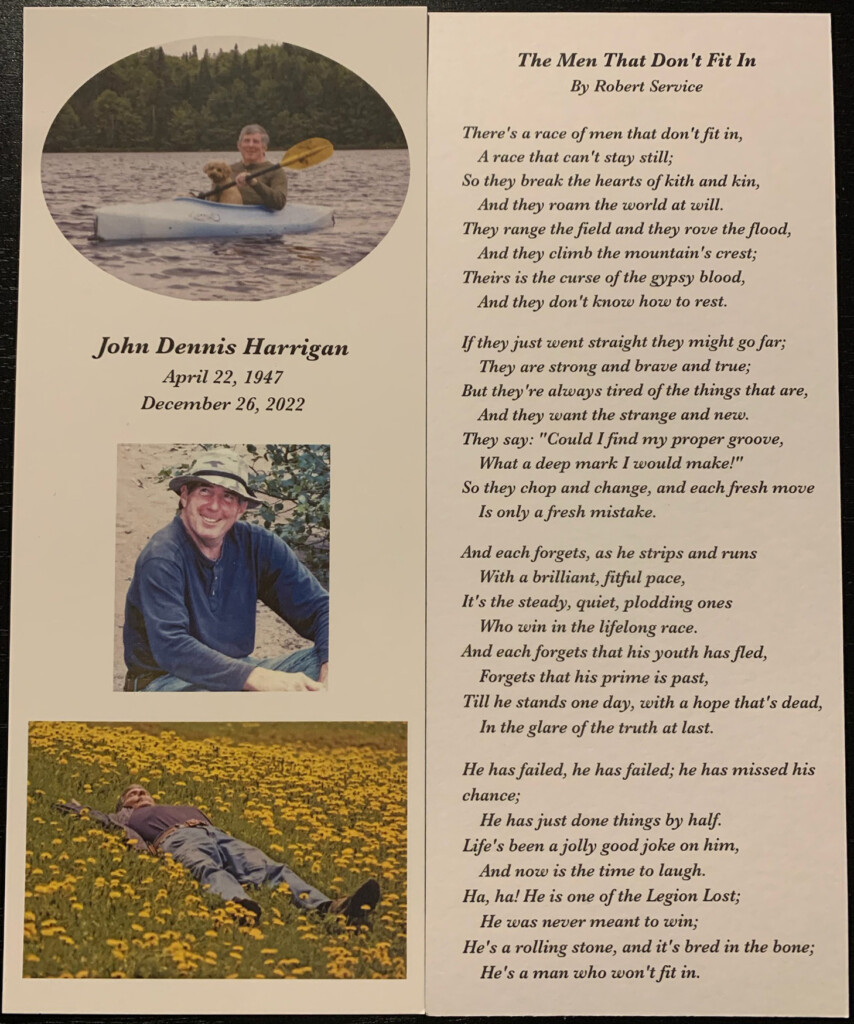 Meanwhile, I came to my own inflection point, but, unlike John, opted not to go home. This place has a weird magnetism, though, and a two-decade roller-coaster ride eventually brought me back.

So when I finally met John I felt a connection to him, and I don’t think I’m being presumptuous in supposing that the feeling was reciprocated. I made two multiday visits to his home in Colebrook during which he let me peer into his world. As I expected, he was cheerful, funny, and an outstandingly gracious host—but nor did he try to hide a melancholy streak. He was feeling his age by then and half-jokingly asked me whether my editor, in sending me to profile him, had access to some dark secret concerning his physical condition. “Usually,” he said, “they do this kind of piece when someone’s about to kick the bucket.” At other times, especially in the evening, I could distinctly hear in his voice the “sigh” at the end of “The Road Not Taken”:

I shall be telling this with a sigh

And you know the rest—or at least John would have. We were drawn to many of the same books, shared more than a few cranky notions, and sometimes found ourselves finishing each other’s thoughts, to our mutual delight. By showing me himself as he really was, John showed me that life is never quite what you think it’s going to be when you’re young—especially if you go your own way.

I heard the news of John’s death on the radio, where I used to hear his voice in life. I had been thinking of him just the day before, thinking it had been almost two years since I’d last seen him, that I should get past my embarrassment about being scarce and either call him up or just drive to Colebrook unannounced, since John was one of those who still relished the drop-in. Alas, I missed my chance. 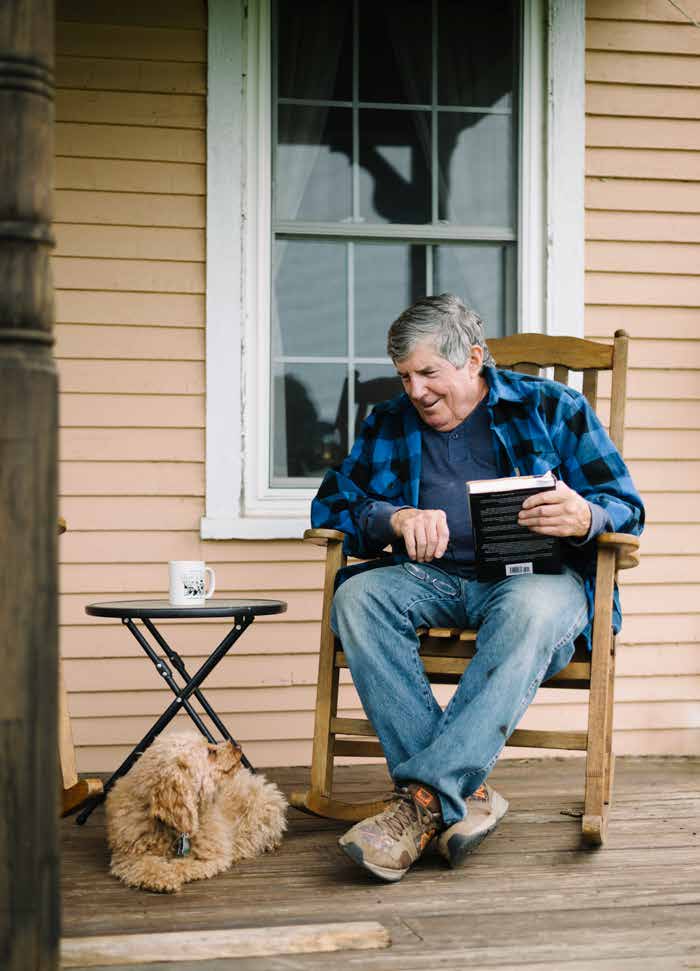 Harrigan and Millie relax on the porch. Photo by Bruce Luetters.

It always amazes me how far up Colebrook is, even leaving from Littleton, where I live and where John was born in 1947. As I drove toward his visitation, I thought about how he loved to dramatize the remoteness of his hometown from the world “down below” by referring to it with phrases such as the “Great White North” or the “tundra.” He told the story of buying a heavy printing press in Rochester with his father and “hauling it up ovah the Notch to Lancaster,” evoking an image of two men heaving into ropes with all their might in the shadow of the Great Stone Face. I laughed and said, “That reminds me of …,” but before I’d finished the sentence he guessed where I was going and said, “the steamboat in Fitzcarraldo.”

Considering John’s self-image as a man of the north, I was not surprised to find a poem by Robert Service on the memorial card, along with a picture of John in old age sprawled in a field of dandelions like St. Francis. But “The Men That Don’t Fit In” is a sad poem about wasted life, and a few lines almost made me cry right there in the funeral home. Then I imagined John looking down and seeing me in such a state, which nearly made me laugh out loud, because suddenly I remembered sitting with him on his front porch near sunset and watching a robin chick recovering from a tumble on the lawn. John remarked, “Look at that poor creature trying to regain what little dignity a twenty-day-old Robin has.”

As I milled around the parlor trying to maintain my own dignity, I was warmed to see photographs of John going back decades. What struck me was that in most of them he was surrounded by friends, a great many friends. It reminded me of walking and driving around Colebrook with him and how long it took to get anywhere, because everyone wanted to stop to visit with him.

That John felt different is easy to believe. He was something of a big fish in a small pond. He garnered all sorts of honors and awards for his work as a journalist, and for years he was practically the official spokesman for all of New Hampshire north of the Whites. He was sensitive, intelligent, well-read, and had a way with words. But the small pond he lived in was home, and he loved it deeply—and the other fish swimming in it loved him. There’s nothing wasted about that.