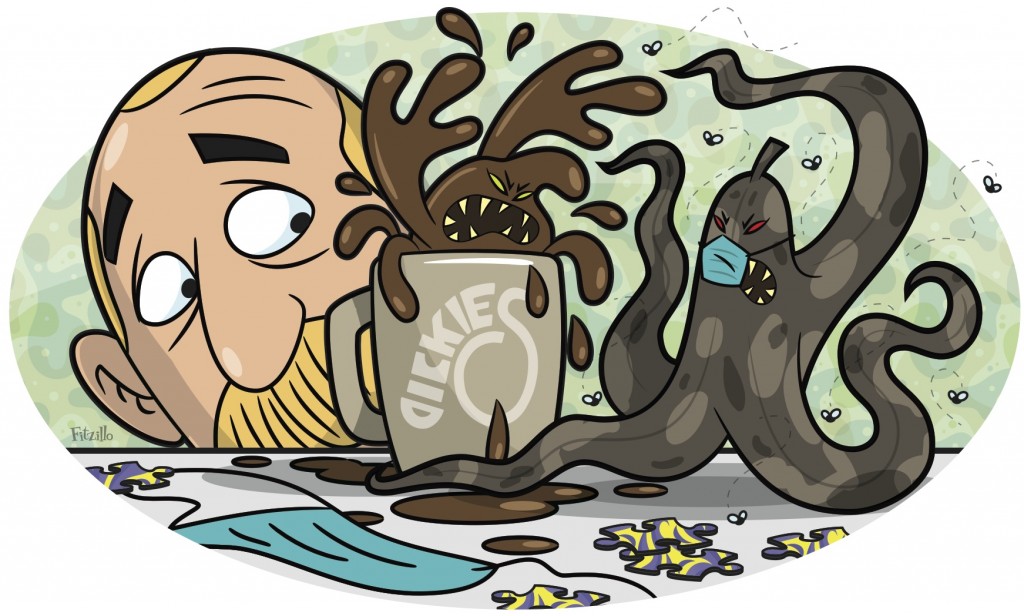 During the pandemic, I’ve had time to explore an exciting new hobby called “drink a bottle of wine and order BB guns and guitars online.” You may think I am kidding, but I assure you, I am not.

It’s just one of the really fun but frankly disappointing pursuits I’ve undertaken during this extended work-at-home period, which means it’ll be best for all of us when we do return to the office. When that day comes, it’s all going to look very strange — everything will be exactly as we left it on March 13. I’m guessing the coffee remnants in the cup on my desk will have evolved into a sentient being. It probably has better hair than I do.

As I attempt to email CoffeeThing to let it know I come in peace, and as we enter into what is hopefully a slowdown of the pandemic, I thought I’d conduct a self-assessment to see how I handled being homebound for a bit. Here, then, is my Quarantine Report Card:

The only reason I passed my freshman Western Civ final about Alexander the Great in college was because I knew all the lyrics to an Iron Maiden song about him. It seems I get a lot of my history lessons from pop culture. So when we binged the new documentary series “Grant” on the History Channel this past week, it became a master class on the Major General/18th President. Before viewing, I knew Ulysses S. Grant rests in a tomb in New York City, and unlike his military adversary, there isn’t a 1969 Dodge Charger named after him. After: I now know the “S” in his name doesn’t stand for anything, and he was supposed to go to the theater with Lincoln the night the latter was assassinated. Also, Grant didn’t go because he was disappointed it wasn’t “Cats.” Probably.

I was once a hockey player. Now, thanks to age, inactivity and (let’s be real) a complete lack of skill, I puzzle. I’m a puzzle guy. I lean over a coffee table for hours at a time, rising to discover that even a small amount of activity makes me sore. I’m not sure stretching out over 500 to 1,000 tiny cardboard pieces with a “North Woods Law” marathon on in the background for a Sunday — the whole Sunday — is good for my back, but it has to be good for my competitive jigsaw puzzling prospects.

I listened to the Dickies’ cover of “The Banana Splits” theme song for seven hours straight one day, and I own two cigar box guitars that I didn’t have when this all started.

I made banana bread. That’s how I knew we were getting to the point of desperation. I don’t cook, bake or otherwise craft foodstuffs. I consume them. I do not make them. Except for banana bread, apparently, and even that was because we had bananas on the counter that were mostly black and I felt bad about throwing them away. I also made homemade pasta one day. The banana bread came out pretty good.