The Remains of Franklin Pierce’s Pencil Mine

It’s where Franklin went to get the lead out 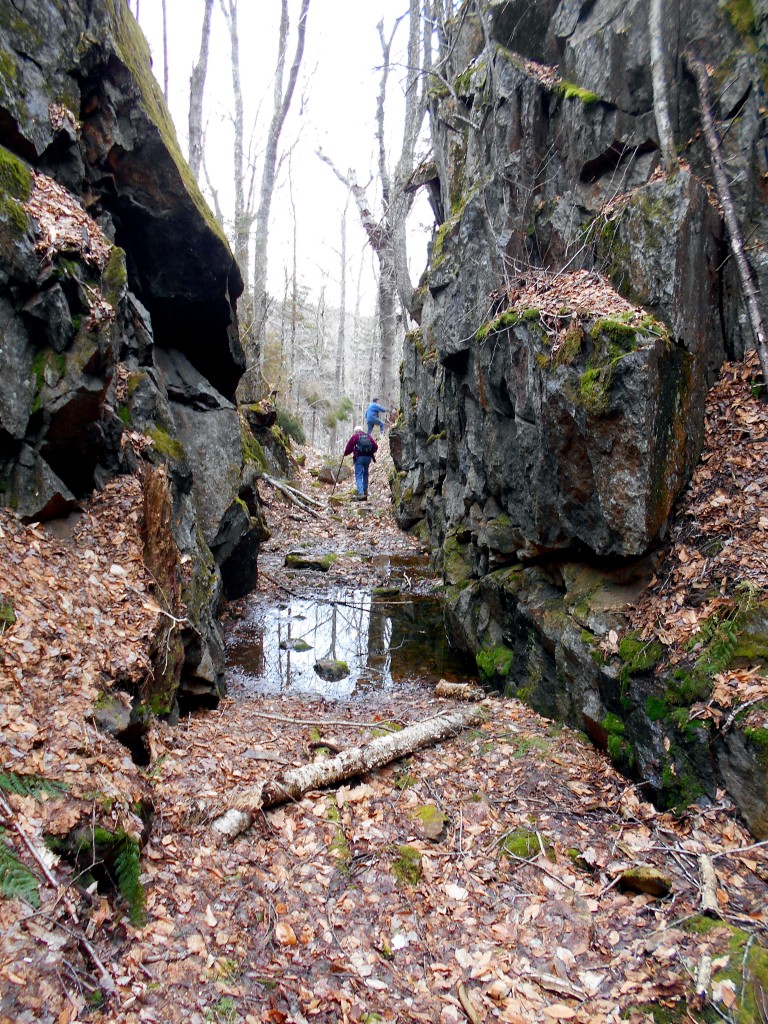 The trail down to the plumbago pit. Courtesy photo

I’m trying to write on a piece of paper with a rock. Not just any ordinary rock — this rock was once owned by Franklin Pierce, the 14th president of the United States. I’m in a remote corner of Goshen, a couple of miles into the woods beyond the end of a narrow dirt road where I’ve left my truck. On foot, I followed an old skidder road until it petered out and then a goat trail that climbed most of the way up the western slope of Sunapee Mountain. I’m now looking down into a 30-foot-deep chasm that was once President Pierce’s plumbago pit, or “Pierce’s lead mine” as it was called when Pierce owned it.

“Plumbago” and “black lead” were names used in the early 1800s for the mineral that today we call graphite. The raw graphite was so similar to lead ore that miners called it plumbago — which is Latin for lead ore or, colloquially, black lead.

Graphite is actually a crystal form of carbon and is chemically unrelated to lead, but the two ores had a similar appearance, resulting in some confusion and comingling of the names.

Graphite, or plumbago, had several uses, including as a lubricant, iron-blackening stove polish and for the “lead” in graphite pencils. Pulverized plumbago powder mixed with a clay binding agent and encased in wood made for a portable writing implement that was more convenient than a quill and ink bottle. Errors made with a plumbago pencil could also be erased with a “rubber,” whereas errors, splotches and spills made with quill and ink meant the frustrated writer would have to start all over. As there was a demand for pencils in the early 1800s, there was money to be made in the mining of plumbago.

In 1844, Dr. Charles T. Jackson wrote a report on the geology and mineralogy of New Hampshire. His report states: “The beds of plumbago are never large and only employ the farmers during those intervals in agricultural labor when hands can be spared from other work. The most extensive and profitable plumbago mine is wrought in Goshen by Mr. Henry D. Pierce of Hillsborough, who operates it in the way above alluded to and finds the business profitable. He sells about twenty tons of the ground mineral per annum at prices varying from three to five cents per pound. … The quality is not equal in quality to that obtained at Ticonderoga and does not sell at top quality price but sells at a good second quality price.”

This mine was first owned by Franklin Pierce’s father, Benjamin Pierce, a Revolutionary War general. General Benjamin Pierce had served as governor of New Hampshire from 1827 to 1828 and again from 1829 to 1830. When his term ended in 1830, he retired to his farm in Hillsborough, where he was content to live the life of a gentleman farmer. Benjamin Pierce partnered with his youngest son, Henry, and bought this Goshen property in 1835 primarily for cow pasture, but he knew that there was ore on the property. Benjamin and Henry Pierce began development of the mine and bought an ore mill, which was put into use at the mine. The crushed plumbago was sorted in a shed at the mouth of the mine, and then barreled and hauled by oxen over the mountain to Hillsborough where it was shipped by railroad to Boston. 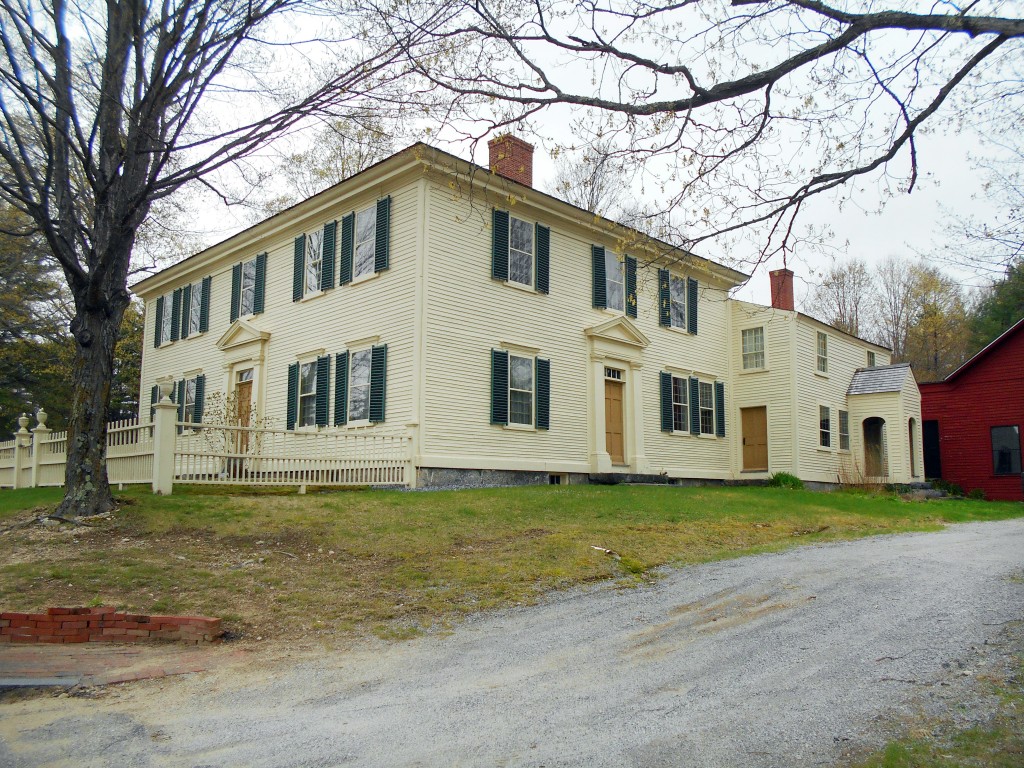 The Franklin Pierce Homestead is a historic house museum and state park in Hillsborough. Courtesy photo

Former governor Benjamin Pierce died in 1839, leaving portions of the family farm and mine to his middle son Franklin. While Henry Pierce had been busy working at the family mine, older brother Franklin was busy as a lawyer in Concord, serving in the New Hampshire Legislature, and representing New Hampshire in Washington, first in the House of Representatives and then as a senator.

Sen. Franklin Pierce volunteered for military service during the Mexican War between 1846 and 1848, and he achieved the rank of brigadier general. When the war ended, he returned home to a successful law practice in Concord, and enjoyed some local fame and gravitas as a former general and senator. In 1852, when the Democratic National Convention found the delegates bitterly divided into bickering factions, Franklin Pierce emerged as a compromise candidate. The delegates had voted unsuccessfully 48 times, eliminating all the well-known candidates. Pierce was a relative unknown who offended no one and who had served in the Mexican War with some distinction. Pierce won the party’s nomination on the 49th attempt at choosing an acceptable candidate.

Because the Whig party candidate, Gen. Winfield Scott, was suspected in the South of favoring the abolishment of slavery, Pierce won the general election with a narrow margin of popular votes and was elected president in 1853. Shortly before being sworn into the highest office in the land, younger brother Henry Pierce deeded the 25-acre tract containing the graphite mine to his big brother. The period of time when the president owned a cow pasture and plumbago mine in Goshen makes for some unique bragging rights and a bright paragraph in Goshen’s history, although the President’s time and energies were probably focused on national affairs, and it is more likely that brother Henry focused on the mine.

Tragically, while on a train headed to Washington two months before he took office, Pierce witnessed his 11-year-old son killed when the train derailed and wrecked. Pierce entered his presidency grief-stricken with shattered nerves and was unable to deal with the demands of the turbulent years leading up to the Civil War. Pierce, the Goshen plumbago mine owner, served as president from 1853 to 1857 and was not reelected to a second term. 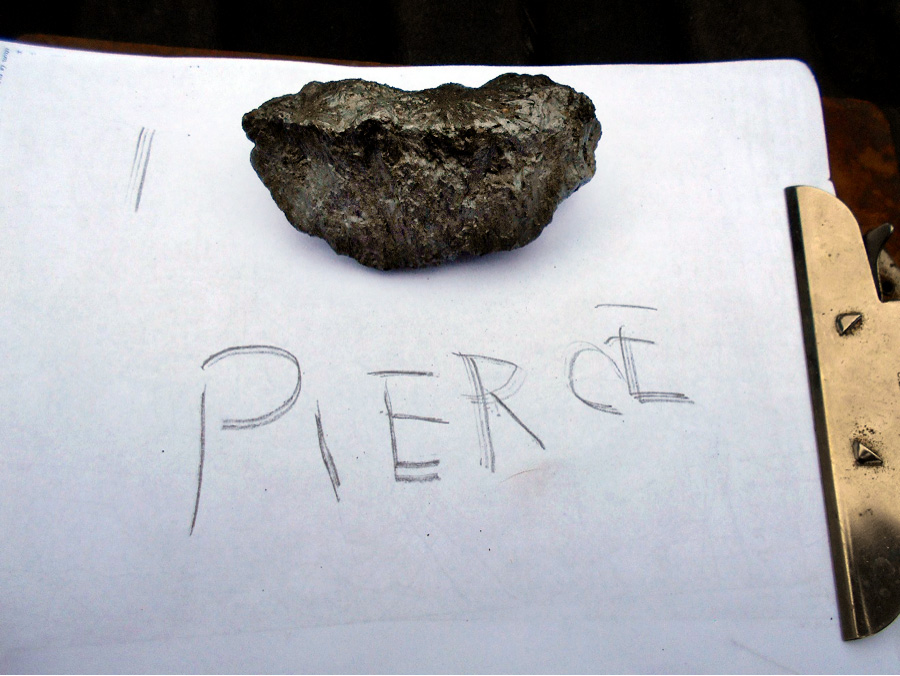 The mineral deposit still yields plenty of plumbago should anyone want to make their own pencils. Courtesy photo

Former president Pierce returned home to New Hampshire to practice law and manage the Hillsborough farm and Goshen mine. Unable to find labor during the Civil War, Pierce sold the old graphite mine in 1864. Coincidently, one of the buyers was named Peirce, no relation, and with a slight variation in the spelling of their last names, Peirce vs. Pierce. Perhaps it provided President Pierce some level of happiness in knowing that it would still be known as Pierce’s lead mine after he sold it. President Franklin Pierce died a few years later in 1869 at age 65.

I’ve selected a pointy rock from the tailings pile at the mouth of the mine and scratch it across my clipboard to see if it will write. Successfully, I spell out Pierce. I’ve found second-class plumbago but rich history at Pierce’s lead mine.