Hiking to a 1942 WWII bomber crash site on Mt. Waternomee 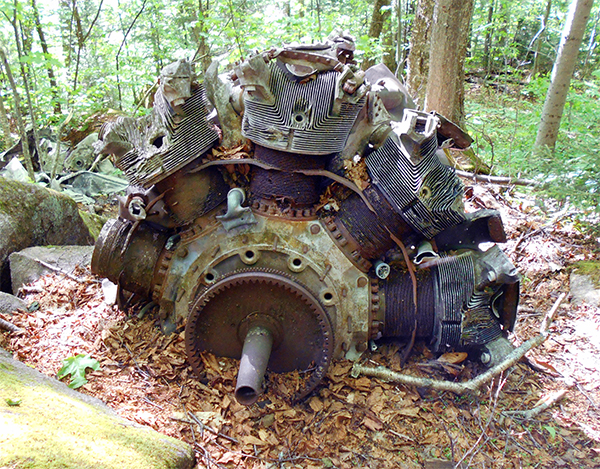 To get to the crash site, you’ll need to find the unofficial — and unmaintained — trail up Mt. Waternomee, or grab a map and compass and make your own way up.

There is an unofficial and unmaintained trail up to the bomber crash site on the other side of Mt. Waternomee, but I opted to go trail-less for a shorter, more direct approach. I’m a map and compass guy, so armed with a compass, some good maps, the coordinates of the crash site and the back of an envelope sketch from a friend of a friend, my trusty trail dog Jake and I set out one morning to find the site where a WWII B-18 bomber crashed into a North Woodstock mountain.

Jake and I decided to bushwhack in from a higher elevation starting point that avoids the river crossing on the unofficial trail. The trade-off was that we had to bushwhack through chest-high, ankle-tangling hobblebush and muddy moose wallows with few landmarks for navigation.

The hike to the crash site was challenging, and the blackflies were relentless, but eventually we found what’s left of the plane. The difficult terrain and general inaccessibility means that the site is largely unchanged from the events of January 14, 1942, when three explosions on Mt. Waternomee shook houses, rattled windows and spurred locals into action. Jake and I explored the remnants of the giant aircraft engines, landing gear, broken-off wings, and other twisted aluminum wreckage scattered on a steep slope at approximately 3,800 feet.

Events were set in motion when the twin-engine bomber took off from Westover Field in Massachusetts and headed out over the Atlantic Ocean on an anti-submarine patrol. On the return flight, the airplane encountered blinding snow squalls and gusting winds that blew it 150 miles off course. The officers aboard the plane were actually B-24 pilots and were inexperienced in handling a B-18. All of them were part of a “borrowed” crew thrown together for this mission. 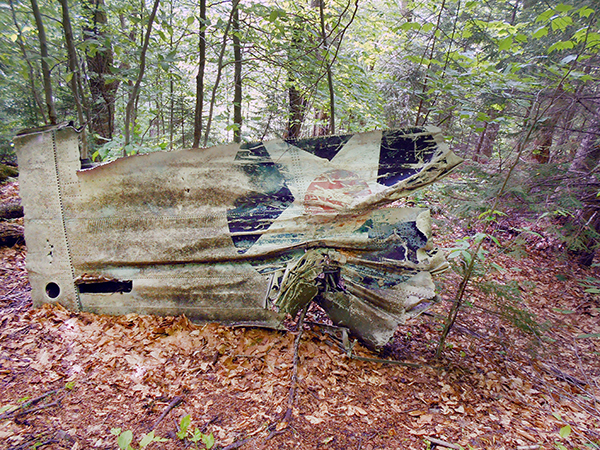 Remaining wreckage of the plane, including wings, landing gear and twisted aluminum panels like this, can still be found on the mountain.

The plane was completely engulfed in the blizzard creating zero visibility, but Lt. Benvenuto continued to maintain a surveillance altitude of 4,000 feet, believing they were out over the Atlantic Ocean. When a momentary break in the clouds revealed the lights of a city below them, they believed they were passing over Providence, Rhode Island. Acting on that assumption, they adjusted course and turned northwest in a direction they thought would bring them to Westover Field. But the city they had seen was not Providence, Rhode Island, it was Concord, New Hampshire.

Now flying a northwesterly course, the wind picked up, the temperature dropped, and ice began forming on the wings. With ice buildup growing and airspeed dropping, the plane became hard to handle and Lt. Benvenuto dropped to 3,800 feet. By doing so, he put them on a collision course with Mt. Waternomee.

Shearing off treetops, the bomber smashed into the mountain and pancaked its way through deep snow. As it plowed through a stand of trees, one wing was ripped off and the body of the aircraft split open before grinding to a stop. High-octane fuel dripped on the one remaining engine, and minutes later, a fire erupted that rapidly worked its way to the bombs still on board.

Miraculously, five of the seven crewmembers survived the crash. Pvt. Lawrence and Pvt. Philipps were killed, either in the crash or by the subsequent explosions and fire. The survivors, who were in bad shape, were on the top of an inaccessible mountain in a blinding snowstorm with a very cold night approaching. 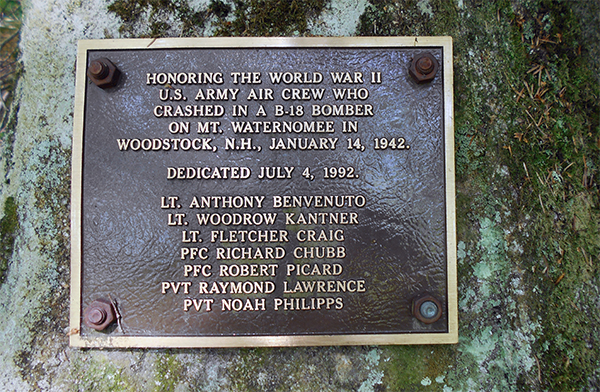 This plaque on Mt. Waternomee honors the seven men on board the crashed plane. Amazingly, five of the seven survived the crash and subsequent explosions.

Woodstock residents formed rescue teams and headed up the mountain searching for the cause of the explosions, which was still unknown to them when they departed. As they neared the site, three airmen in blood-stained flying gear staggered into view. As they stumbled nearer, it was evident that the survivors were in deep shock. The lead airman, navigator Lt. Craig, appeared to be the least seriously injured. He had only facial lacerations and bruises, while the co-pilot, Lt. Kantner, had similar cuts but also a broken forearm and ankle. Pvt. Chubb, the mechanic, had an ugly cut over his eye, his front teeth were missing, and his jaw was badly fractured.

Some distance away and not moving, Lt. Benvenuto lay sprawled in the snow. Having crawled two hundred yards from the wreckage, he was lying there with a broken back. Seventy-five feet away, in deep pain and nearly frozen to death with his left leg wrapped around a tree, was machine gunner PFC Picard. Picard had crawled out of the burning plane and dragged himself as far as he could when it exploded. A large piece of the plane hit him in the shoulder blade with enough force to knock him into the tree.

Rescuers built roaring fires and sent for toboggans and blankets to carry the wounded crewmembers down the mountain.  Numerous downed trees from the ’38 hurricane created impassable toboggan obstacles, so rescuers started cutting trees and swamping out a trail to extricate the injured men.  Multiple trips up and down the mountain in the deep snow were necessary before they got all the injured off the mountain.

As Lt. Benvenuto was being covered with blankets and prepared to be tobogganed down the mountain, he warned them about the unexploded 300-pound bombs that had been onboard the now-wrecked and on-fire bomber.

The next morning, a live bomb was found buried deep in the snow. With no way to move it off the mountain, a bomb expert was brought in to supervise shoveling snow away from the bomb that could have exploded at any moment. Once the bomb was fully exposed, dynamite was packed around it and the charge was set off. It took two attempts, but the bomb finally exploded with a cataclysmic roar. In addition to destroying the bomb, another priority assignment was to find the top secret Norden bombsight that had been onboard the plane and to retrieve any parts of it that had survived the crash and fire. (By the way, an intact Norden bombsight is on display at Wolfeboro’s Wright Museum.)

Of the five airmen who survived the crash, Lt. Kantner became a successful real estate developer in Florida. Pvt. Chubb retired as a maintenance foreman at Hanscom Field in Massachusetts. Lt. Craig became a dentist in California. PFC Picard is believed to have moved to California where he became a member of a religious commune. Lt. Benvenuto did not survive the war. After recovering from his back injury, he was returned to active duty and died when his B-24 was shot down over Asia.

When it was time for me to leave, I considered my trek back out. While my hike might be difficult, it would be a walk in the park compared to the rescue team’s journeys up and down the mountain in the cold and dark, during a blizzard, through deep snow, over downed trees, and while pulling a toboggan with an injured man on it.  Solemnly, Jake and I paid our respects to both the rescuers and the airmen at a memorial plaque at the crash site, before pointing my compass back to the truck and heading down the mountain.