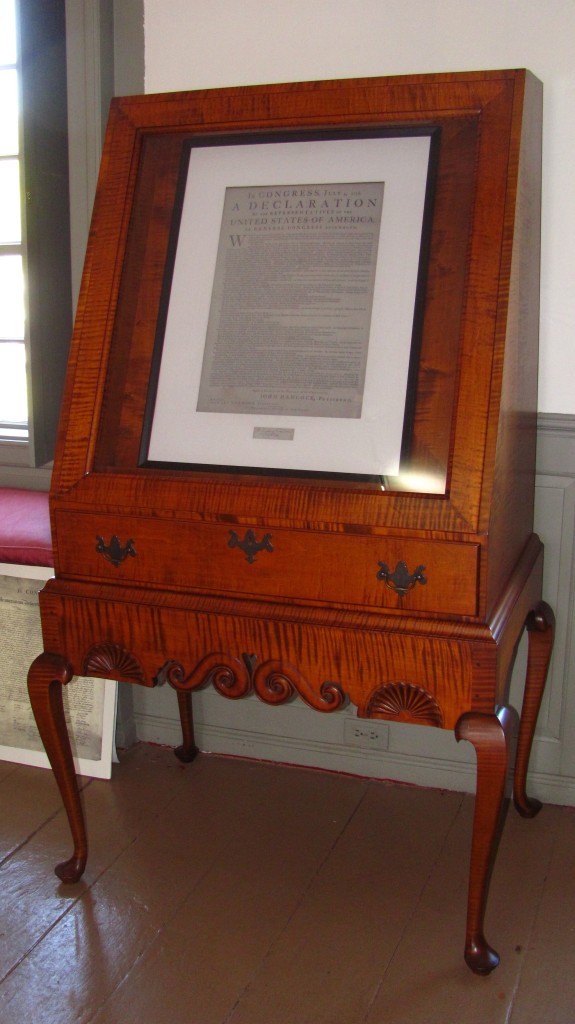 The Dunlap Broadside is on display at the American Independence Museum in Exeter.

Exhausted from many days into nights of debate but excited about his mission, the courier stepped out into the Philadelphia heat of July 4, 1776. Clutching a document, finely carved by American advocates of freedom, he left the white-paneled rooms of the Statehouse and hurried down the familiar street to the corner print shop of John Dunlap. Church bells pealed the cry for independence as the delegate handed the paper to the 29-year-old printer who would work until dawn, committing himself to a labor of patriotic loyalty: issuing the first copies of the Declaration of Independence.

A number of those copies, known as the Dunlap Broadsides, left the print shop on the early morning of July 5. Quickly bundled, ink barely dry, they were dispatched to European capitals, the commanders of the Continental Army and to every assembly throughout the 13 colonies. Signed only by John Hancock, as president of the Second Continental Congress and Charles Thompson, as secretary, each broadside showed a final line: “PHILADELPHIA PRINTED BY JOHN DUNLAP.”

Within two weeks, a copy arrived in Exeter, the Revolutionary War capital, where John Taylor Gilman read it to a gathered group. Two centuries later, in 1985, the Dunlap Broadside, as this printing is called, was found in the attic of the Ladd-Gilman house (known as Cincinnati Memorial Hall) in downtown Exeter. Today, the house is the American Independence Museum, owned by the Society of the Cincinnati of New Hampshire, a historical group whose members must have direct lineage to George Washington’s officers.

“This Dunlap Broadside is a very unique and special part of the history of our country. Only 150 to 200 replicates were printed at the time. Fewer than 26 verified copies are in existence, and the fact that one of them resides here is something New Hampshire should celebrate,” says Sabina Ion, the content and marketing manager of the museum.

Broadsides are large single sheets of paper distinctly printed on one side with records of events, concerns and ideals quickly set in ink in the heat of the moment. Usually political, they were designed to be immediately posted or circulated. Typically, the current event was as quickly lost or forgotten. Dunlap’s broadsides of the Declaration were not forgotten and are considered extremely rare and priceless. Once rediscovered, the museum’s copy, which had luckily been protected by obscurity in the attic, was then preserved by experts.

It was first sent to the Northeast Document Conservation Center in Andover, Massachusetts. A representative of NEDCC commented that the entire broadside, totally in non-archival format, was all there, not brittle and in great condition with no typical loss of text along fold lines.

After its return from NEDCC, the 183/8-by-13½-inch document went to A Picture’s Worth, an Exeter frame shop, where the portentous project of technically framing the broadside began with a framing study for mounting, and ended with a 21-by-27-inch custom period frame of dark mahogany (it’s really almost black) with hand-rubbed gold leaf. “I was so honored to be chosen,” says Jenifer Segal, proprietor of the frame shop. “I had chills working on something so significant to this state and country. I held a document basically direct from our Founding Fathers.”

In 2014, D.R. Dimes, an 18th-century reproduction furniture maker, created the current tiger maple display wired to an electronic security unit. (The document is kept in a vault when not exhibited.)

Thomas Jefferson’s “fair copy” of his immortal Declaration of Independence, from which John Dunlap printed his broadsides, is lost, but in a rambling, yellow-clapboard history museum on a hill overlooking downtown Exeter, a Dunlap Broadside remains. Once rolled, quickly stuffed into a saddle bag and carried by horse to New Hampshire, it is now safely preserved to tell of a time when fervent patriots sat in the heat of the Pennsylvania Statehouse in Philadelphia and arrived at the decision to declare independence.