Decorating is not my strength. In summer, I harvest catnip and spread it on the floor. It creates texture — and the cats love it. 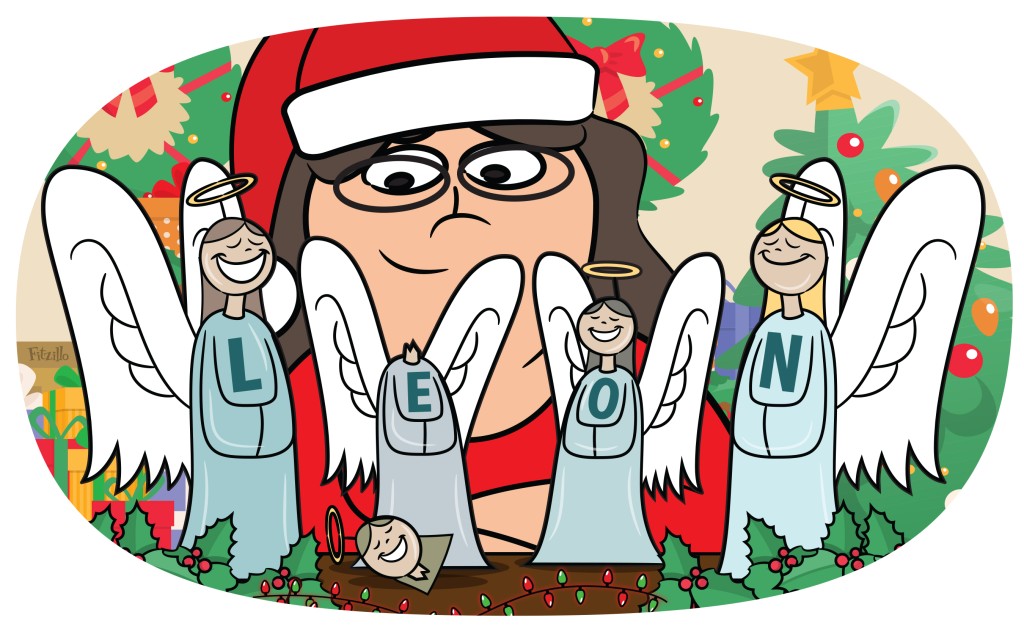 Decorating is not my strength. In summer, I harvest catnip and spread it on the floor. It creates texture — and the cats love it. For Easter, I display a paper mâché bunny and three plastic eggs on the mantel and call it good. At Halloween, a two-foot Annalee ghost with autumn leaves in its hatband (a gift from my mother-in-law) captures the spirit of the season. The fishing Santa in a shamrock-adorned boat (also a mother-in-law gift) combines St. Patrick’s Day and Christmas.

Christmas calls for a little extra effort though, if only to fend off the darkness that descends each afternoon about 4:30 p.m. and makes us all a little blue. Gotta have lights. For starters, I drape a string over the naked lilac by the porch. On our annual trek to Barrington’s The Christmas Dove, we invested in fairy lights for the living room that flash different colors in different combinations. Endlessly entertaining and so cheery, we leave it up year-round. Also cheery, four ceramic angels, each with a letter on her chest. Together, they spell LEON. The cats knocked E over, decapitating her. We set her sad little head (artistically) at her feet. Now we love her even more.

Some years we cut our own tree at Walker’s Farm in Madbury — a tradition for many, judging by the cars lining the narrow road. We wrap the tree in lights and load it with ornaments on a theme like silver/gold or rustic (pine cones, woodsman with axe, popcorn), or critters (moose, birds, flying pigs). Other years we put my parents’ ’50s-era foil tree with rotating color wheel. (It doesn’t shed.)

The crèche on the piano features a T-Rex, a My Little Pony and He-Man action figures from our daughter’s childhood.

A lot of yew, holly and boxwood grows around the yard, so I (artistically) place swags of fresh greens throughout the house — back of the toilet, top of the fridge, along the windowsills.

Speaking of greens, Lynn Baker told me about her grandmother from Gorham, Maine. The boy who would become Lynn’s grandfather worked on the farm as a hired hand, so the two knew each other as teens.

Another hired hand, Bert, refused to hang up his stocking with the others at Christmastime. “Ain’t no such thing as Santy Claus,” Bert said.

The teenagers insisted that if Bert hung a stocking, Santa would fill it. Bert was adamant: “Ain’t no such thing as Santy Claus. Nossir.” They persuaded him to hang a stocking just in case.

During the night, they filled it with candies, fruit and trinkets, then stuffed sprigs of holly in the top and hung it from the mantel.

Early Christmas morning, the teenagers sneaked downstairs, hid behind a sofa, and waited for Bert to appear. Which he did, mumbling, “Ain’t no such thing as Santy Claus. Ain’t nothin’ gonna be there. Nossir.”

He stopped short when he spotted the plump stocking. He ran his hands over it, toe to top, front to back. Finally, he pulled it from its peg and looked in. “Aw, hell,” he said. “Nawthin’ but brush!”

But that’s not the end of the story.

Lynn’s grandfather served in WWII, a conscientious objector assigned to the Red Cross as an ambulance driver and litter carrier. At the time of his first wedding anniversary, he was stationed in Europe.

For a surprise, he filled a cigar box with holly and mailed it home to his bride.

She wrote back: “Aw, hell, nawthin’ but brush.”

And so, a tradition was born.