It’s hard to keep a good bridge down (or up) 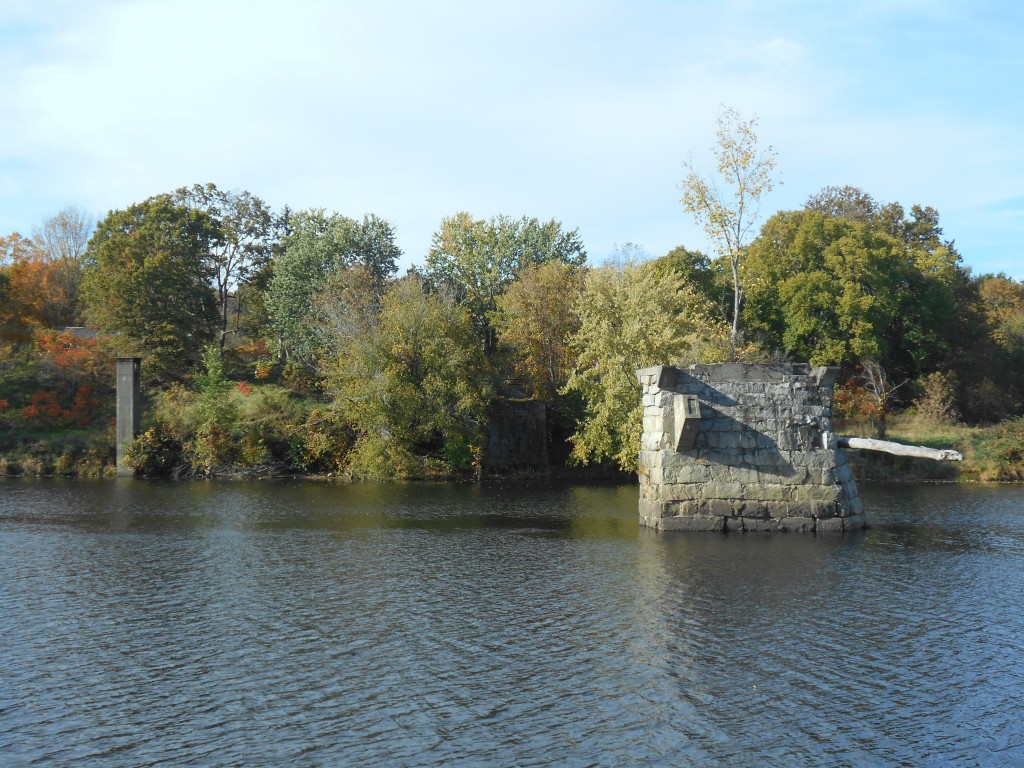 Only the middle pier remains as you look into Vermont across the Connecticut River.

Moody Bedel’s bridge is now dead and gone. All that remains is an imposing granite pier rising out of the of the Connecticut River and stone abutments on opposing banks. In a nearby small, grassy park, a monument that looks like a gravestone marks the passing of Bedel’s bridge and hints at its never-say-die story.

The saga of Bedell Bridge begins in 1805 with the original builder, Moody Bedel. Bedel is remembered not only for building the first bridge between Haverhill, New Hampshire, and Newbury, Vermont, but also for his military career and role in the Independent Republic of Indian Stream rebellion in what is now Pittsburg. During the Revolutionary War, as a 12-year-old drummer boy, Moody marched off to Canada and on to the battle of Saratoga. Legend has it that a letter from President George Washington recognizing the military service of Bedel spelled the family surname with an extra “L”, perhaps explaining why Bedell Bridge named after Moody Bedel is spelled slightly different. 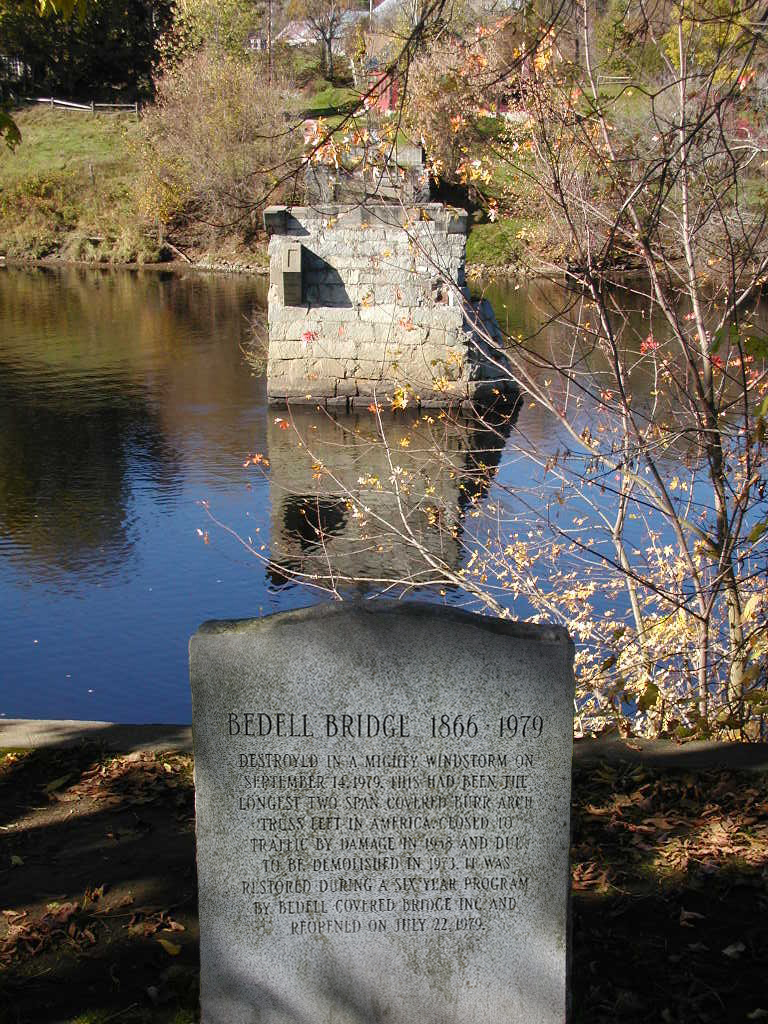 A headstone marks the site and passing of Bedell Bridge.

After the war, Moody returned to Haverhill and operated a ferry crossing the river.  Bedel’s ferry not only accommodated people but his flatboats could also handle loaded wagons drawn by horses or oxen.  While his ferrying business was profitable, it was seasonal and required his constant presence, so the restless Bedel replaced his ferry with a toll bridge. This first bridge was a series of wooden plank, flat open spans resting on stone and timber cribbing.

With the success of his toll bridge, Bedel invested in area saw and grist mills, joined the local militia, held town offices, and got involved in land speculation.  He participated in the development of the town of Coventry, now Benton, and bought and sold land in Bath. In 1798, Bedel undertook a bold and risky venture, purchasing a one-third interest in the wilderness of northern New Hampshire from a North American sachem called “King Philip.” Bedel and his partners had their eyes on the “Indian Stream Territory” north of Stewartstown, but their investment was precarious as this land was claimed by both England and the United States.

Bedel’s grand plans were interrupted when the War of 1812 broke out. In the New Hampshire militia he had risen to the rank of brigadier general but resigned this commission to enter the regular army as a lieutenant colonel. Colonel Bedel commanded an infantry regiment at Burlington and then at Fort Erie. Frustrated by inactivity, he volunteered to lead a counterattack against the British siege of the fort. In drenching rain, Bedel and his men stormed the British batteries, spiked their cannons, and inflicted such casualties that the British withdrew. 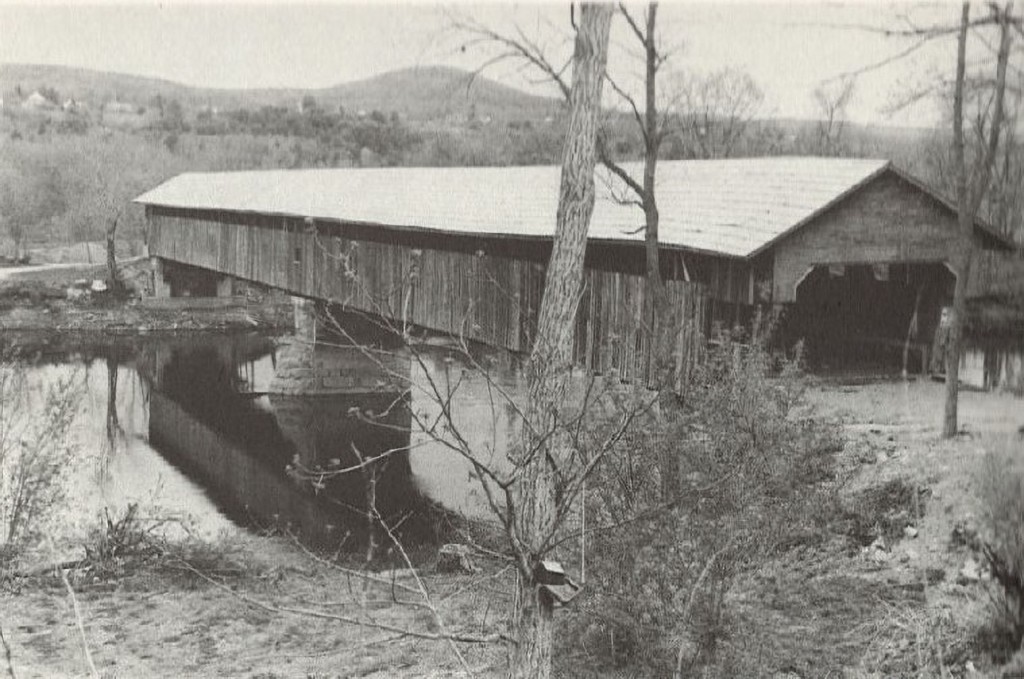 Moody Bedel’s bridge after the 1979 restoration

Back home, Bedel’s bridge was severely damaged by a flood and had to be rebuilt.  Eighteen years later, this second bridge was also swept away by floodwaters, and travelers reverted to ferry service until a third bridge was completed in 1851. This time, the bridge lasted until a spring flood in 1862. A fourth bridge was immediately begun and the still-standing middle pier was erected just as the Civil War was starting.  This fourth bridge was the first covered bridge at the site, but it lasted only three years, falling victim to a sudden windstorm. The wind blew so strong it lifted the bridge off the foundations and dumped it on its side in the river. That summer, people crossed the river by walking on the side of the overturned bridge. 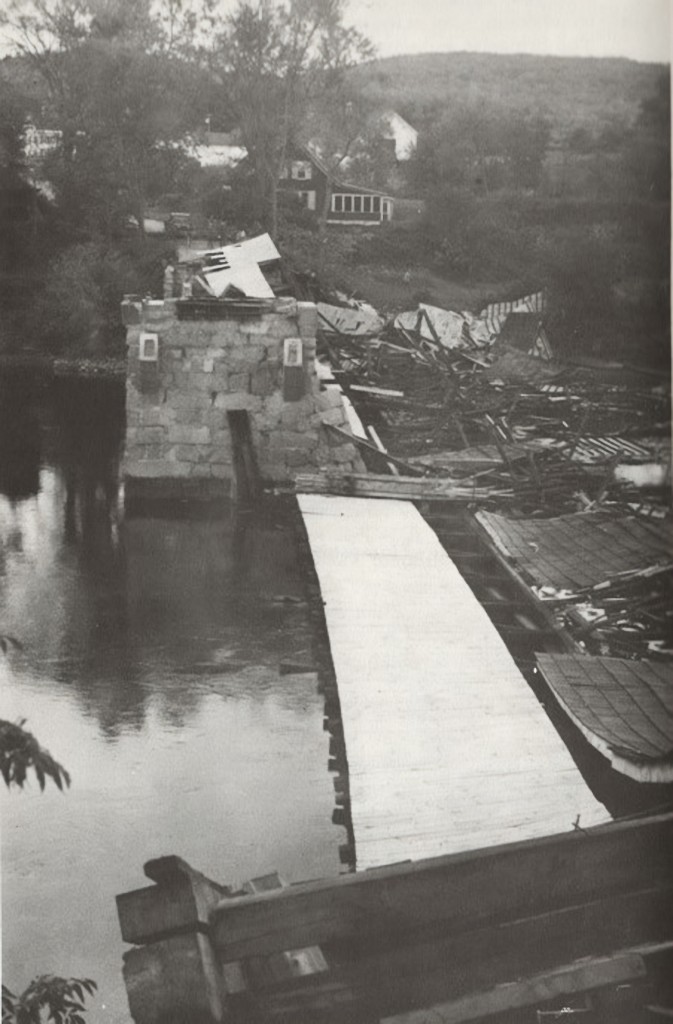 1979 storm damage as seen from NH. South wall laying in the river.

A fifth attempt, utilizing timber salvaged from the blown-down bridge was erected in 1866.  This time, the bridge was constructed using iron bolts and arches hand-hewn from curved trees. It was elevated higher and utilized the Burr truss construction technique, making it stronger than prior bridges. This covered bridge lasted for over a century and became part of the neighborhood. Kids played ball inside it on rainy days and fished through holes in the walls.  It was a vantage point for watching spring log drives coming down the river. An old yarn tells of a teamster who drove a road grader pulled by four horses into the covered bridge, somehow turned the whole rig around, and reemerged on the same side to win a $10 bet.

In 1936, the bridge was battered by ice when floodwater reached five feet above the bridge deck. Age also took its inevitable toll, and in 1958 one arch cracked suddenly and the bridge was closed to vehicle traffic. Another flood caused erosion damage to the embankments and collapse seemed imminent. Experts deemed it beyond repair and the State signed a contract for the bridge to be demolished.

But Moody Bedel’s bridge wasn’t done yet. The impending demise of this historic landmark generated a flood of protest letters to the governor, which resulted in a last-minute stay of execution, postponing the demolition. Supporters formed a corporation to accept liability, raise funds, and seek grants to save the old bridge. Covered bridge expert Milton Graton was hired to make emergency stabilization repairs and then to restore it.

To lift the sagging bridge, Graton created a temporary suspension bridge beneath the covered bridge. Cables anchored on each riverbank passed over high temporary towers at each end of the bridge and draped below the sagging spans, cradling the bridge’s bottom. Tightening the cables slowly lifted the sagging bridge while repairs were made. In July of 1979, Bedell Bridge Park was dedicated during a festive celebration of the restoration. The bridge had been resurrected once again. 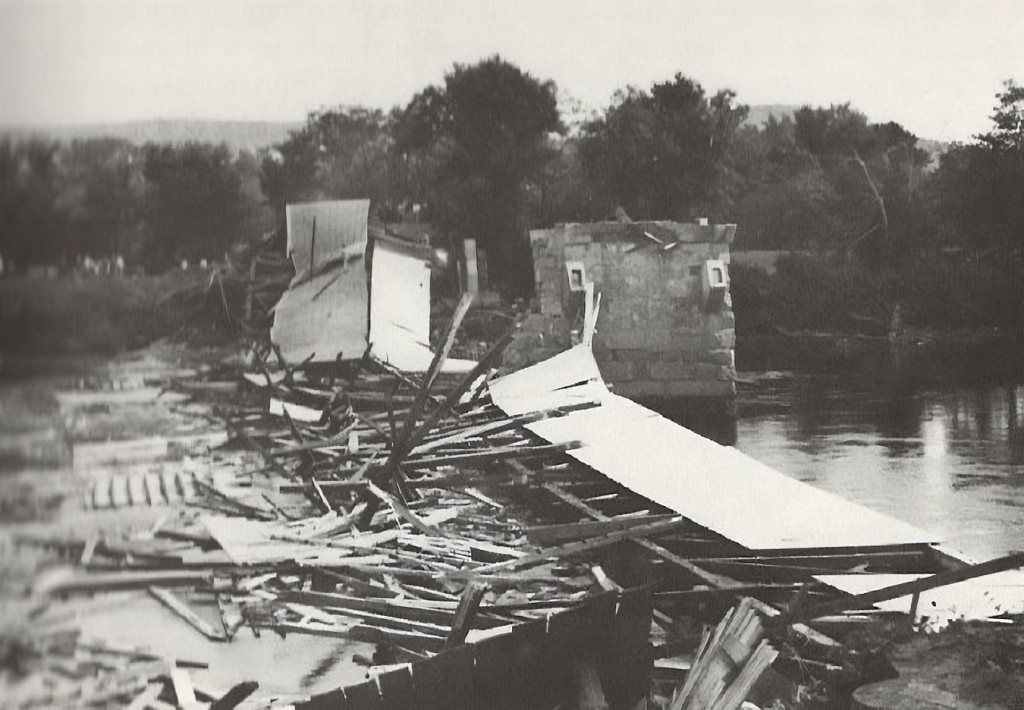 Wreckage of Bedell Bridge as seen from Vermont side.

But nature wasn’t done with Moody Bedel’s bridge yet. Tragedy struck less than two months after the dedication day celebration. A wedding was to be held on the bridge, and the night before the big day, the bridal party went to the bridge to decorate. An unexpected windstorm hit, and the party took shelter inside the bridge. The winds increased and a furious gust wrenched the bridge from its foundation and dropped it in the river. Five people leapt clear before it collapsed, and two more crawled out of the ruins. One bridesmaid was pinned in the wreckage and had to be rescued by emergency personnel. The bridge was destroyed once again.

Present-day safety criteria and traffic demands, coupled with new concrete-and steel construction techniques, make it highly unlikely a new wooden covered bridge will rise again. But don’t bet on it.  Moody Bedel’s bridge has a history of not staying dead and gone for long.

An acknowledgment and thank-you is due to the family of Katherine Blaisdell for graciously sharing their mother’s collection of photos and historical research.