Meet the Brewer: Ryan Bubar of Empty Pint In Dover 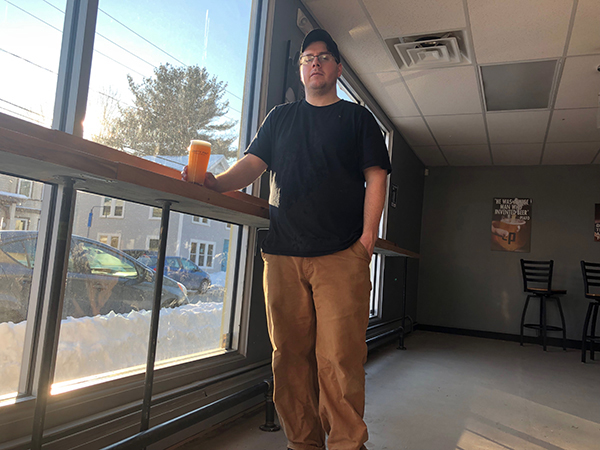 NHM: What’s your annual production size, in barrels?
Ryan Bubar: We do two to four barrels a week. We haven’t even been open a year yet, but we’re looking at about 192 barrels a year, give or take.

NHM: When did you open to the public?
RB: We opened in September — and then ran out of beer our opening weekend. We had to regroup and then stay closed for all of October, but we were open again in the very beginning of November.

NHM: What sets you apart from other New Hampshire breweries? What’s unique about your style or mission?
RB: We’re going from home brewing to professional brewing and learning a lot as we go. We’ve made a few mistakes, but we’ve listened to feedback from customers and learned from other brewers — it’s all about learning for us.

As for our style, our goal is to try to pack as much flavor as we can into our beer. We had a beer earlier called Berry Blonde, and we put 12 pounds of strawberries, raspberries, blueberries and blackberries into it — and that berry flavor came through. That’s what we want to try to do with all our beers. We may not hit it the first time we do it, but we’re gonna learn every step of the way.

NHM: How many beers and what styles do you offer at any given time?
RB: We can have seven beers on tap at one time with our draft system. I try to have as many different styles on as I possibly can, but sometimes that can be difficult to make happen. Right now, it’s all IPAs. I love IPAs, and so does pretty much everybody else, but I do wanna have stouts and porters and blondes. If someone gets a flight, I want the beer rainbow, where it’s a bunch of different colors on it. We’re open to any kind of style.

NHM: What’s your most popular beer?
RB: Berry Blonde was super popular. We’d have people order a flight and say they didn’t want the Berry Blonde, but they’d get it as part of the flight anyway and then they’d come back and ask for more of it. Our new beer Centennial Millennial — which has a huge candied mango, apricot and peach flavor — has also been selling a lot lately, so that could be our most popular with time.

NHM: What’s next for the brewery? Any expansions/changes or upcoming milestones or events to note?
RB: We’re getting a four-barrel system, so this way we’ll be able to do all of our beers at one time instead of having to do double batches. And once we get that going, we’re hoping by the end of February, maybe early March, we’ll start putting our beer into restaurants.

NHM: Where can your beer be purchased?
RB: Right now it’s just at our brewery.

NHM: What is your title at the brewery?
RB: I’m one of the owners and the head brewer.

NHM: How did you get into the brewing business?
RB: I got a home brew kit one year for my birthday. When I made my first batch, it wasn’t anything great, but I just kept on brewing and trying out my own recipes. Eventually I upgraded to all-grain and started brewing even more, and after a while people started to like the beer. When I got an opportunity to make it more than a hobby, I just sort of ran with it.

NHM: Why did you choose to work in New Hampshire? What do you appreciate about the craft beer scene here?
RB: When I first turned 21, Dover was the place where I’d hang out. Now, we have three breweries all within walking distance of each other, and every restaurant in Dover offers local craft beer. It’s cool to see that Dover is becoming a craft beer destination.

NHM: What style(s) of beer are you personally most fond of?
RB: I love IPAs. I’ll try any beer once — at a minimum — but IPAs are my go-to.

NHM: What’s your personal favorite of the beers you make?
RB: Right now it’s Centennial Millennial. We got a huge flavor out of it that was kind of unexpected and I love the way it came out.