For our latest profile, meet Craig Yergeau, the head brewer of 1766 Brewing Company in Plymouth. 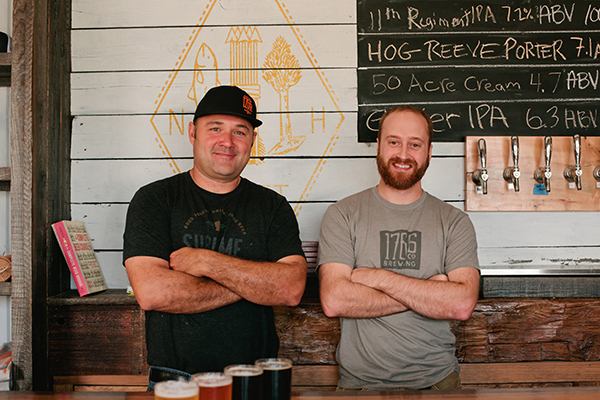 NH Magazine: What is your title at the brewery?
Craig Yergeau: I am the head brewer.

NHM: How did you get into the brewing business?
CY: I started home brewing in college here in Plymouth. After graduating in 2011, I did a few other things, but I ended up at Stark Brewing Company in Manchester in 2013, which is where I got my commercial experience.

Get There
1766 Brewing Company
61 Main St., Plymouth
You can also find their beer at
The Last Chair Restaurant
5 Route 25, Plymouth

NHM: Why did you choose to work in New Hampshire? What do you appreciate about the craft beer scene here?
CY: I am New Hampshire born and raised. I love this state and how we have a little bit of everything in pretty close proximity, like the seacoast, mountains, lakes and a major city. Almost every town in the state has its own feel as well, so just going 30 minutes in either direction lands you in a new place with its own history and personality.

NHM: What styles of beer are you personally fond of?
CY: I don’t really have a favorite style. I just drink what I find to be interesting.

NHM: What’s your personal favorite of the beers you make?
CY: Right now it’s the Anderson’s Milk Stout, but that’s also subject to change on a weekly basis.

NHM: When did you open to the public?
CY: The official re-launch of our taproom as 1766 Brewing Co. was in March 2018, however we were the Sublime Brewing Company before that. This change in name was to avoid a potential copyright dispute with other breweries in the US, although it coincided with my hiring in January 2018.

NHM: What sets you apart from other New Hampshire breweries? What’s unique about your style or mission?
CY: We’re focused on brewing a multitude of more traditional styles as well as some of the more recent developments. The inspiration for our beer names comes from the history of Plymouth and the surrounding areas and activities.

NHM: How many beers and what styles do you offer at any given time?
CY: We typically have 11 beers of our own on tap at the brewpub, however it’s not unusual to have a couple more different options on tap either at The Last Chair Restaurant or other accounts in the area.

NHM: What’s your most popular beer?
CY: The biggest seller by far is the 11th Regiment IPA, which is kind of in between newer and older styles of IPAs, so it’s pretty accessible to a lot of people that are on different sides of what an IPA should be like.

NHM: What’s next for your brewery?
CY: The goal is to stay reasonably local, since our whole ethos is a celebration of the region we live in. We are open to the occasional foray into further areas to get our beer out to the wider market.

NHM: Where can your beer be purchased?
CY: Right now our beer is available on tap at the brewery and The Last Chair Restaurant. It is also available in a few locations in the general vicinity of Plymouth.