A chance encounter at a remote dam site answers an age-old question: just how do you pronounce "Mount Moosilauke" 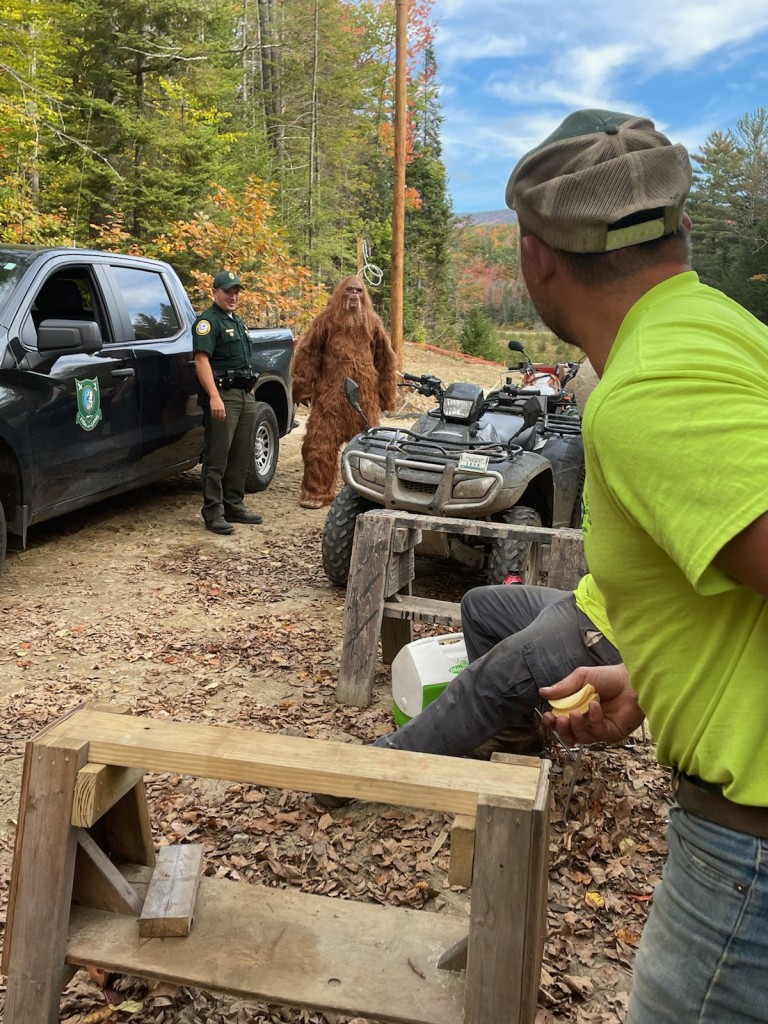 It was at a remote construction site in the shadow of Mount Moosilauke where I saw the Sasquatch. I was sitting on the tailgate of my pickup chewing on a sandwich, when the Bigfoot emerged from the woods. After a momentary stare-down, the monster headed straight for our little encampment. The construction crew and I had to decide whether to bolt in the opposite direction or grab for cameras and hope to capture proof that the legendary Sasquatch really does exist.

Sasquatch is known by different names throughout the world and reported sightings of the beast date back to before recorded history. In the high-altitude Himalayan Mountains where few humans venture, the legendary monster is known as the Yeti or Abominable Snowman, and it has reportedly left footprints that would be physically impossible for someone perpetuating a hoax to have done. In the Pacific Northwest, the indigenous people called the animal “Sasquits” or Sasquatch, which translates to “wild-man.” Explorers and settlers in the region reported seeing footprints and having sporadic encounters with a big-footed creature as early as the late 1800s. To this day, tales are told of a seven-foot-tall, hairy, manlike ape creature stalking the woods and scaring hikers and lumberjacks. In the southeastern bayous and swamps, Cajun folklore tells of a man-ape creature that prowls the bayous, and eyewitnesses report seeing and smelling the giant “swamp ape” or “skunk ape.”

Most scientists believe the Sasquatch is just a hoax or mythical creature, but a few think it is possible that an elusive Neanderthal descendent might inhabit the wild unexplored areas of the planet. New Hampshire is not typically a venue for Sasquatch sightings, but could there be a small Bigfoot population living in the White Mountain National Forest? Perhaps I happened to be in the right place at the right time to catch sight of one. 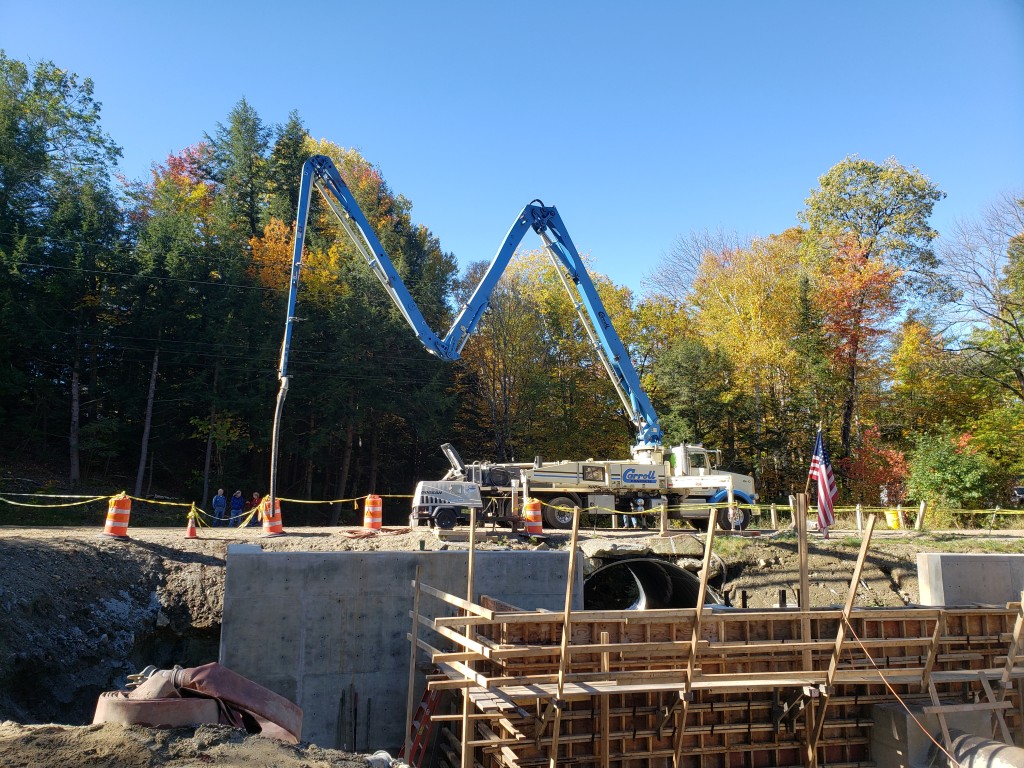 Setting up the concrete pumper truck

I was with the dam construction crew at the site of the Weeks Crossing Dam on Black Brook in Warren. Or more properly, the reconstruction of the dam on this site. An earth embankment dam existed on this site for more than 65 years, but it breached and blew out during an extreme storm event in July of 2017. The sudden gully-washer caused the entire nine-acre Weeks Crossing Pond to drain out through the breach. The blowout swept away a four-foot-diameter culvert and took out a large segment of Gould Hill Road where it ran along the crest of the dam. As a result of the dam failure and road washout, access to homes and properties further along the dead-end road were cut off and isolated.

An emergency fix was made to the road to temporarily provide access to the residences on the north side of the breach and allow access by emergency vehicles. The temporary fix was later replaced with a new and larger culvert, and the road was reopened. But the old Weeks Crossing Dam remained unrepaired, and the pond drained. Some felt it should be left in this more natural condition, but others believed that the dam should be rebuilt, and the pond resurrected.

The old dam was owned by the New Hampshire Fish and Game Department, who had been granted rights to build a dam at this location in 1954. Their old dam provided for enhanced wildlife and fishery habitat, recreational opportunities such as fishing, canoeing and kayaking, and control of the headwaters on Black Brook. The Town of Warren and the United States Forest Service also used this artificial impoundment as a water supply source for filling tank trucks when fighting fires.

After a few years of public hearings, surveying, engineering, designing, permitting, legal paperwork and chasing funding, the construction of the new Weeks Crossing Dam was well underway on the day I had lunch with Sasquatch. There was still a lot of construction to be done, but the concrete forms in place that day were for the last pour. Everyone from the engineering and construction teams unofficially gathered to participate in this final concrete pour.

While waiting for the concrete trucks to arrive, the construction crew posed for pictures on the temporary catwalk staging. The resulting scenic picture features an American flag in the foreground and 4,802-foot-high Mount Moosilauke in the background. This led to some good-natured debate over whether Moosilauke is correctly pronounced with three syllables and ends in “lock” with a silent “e” on the end, or whether a fourth syllable is tucked onto the end so that it rhymes with “Winnipesaukee.” Is it Moose-e-lock, or Moose-e-lock-kee? I take the position that the name originates from “Moose Hillock,” so no more than three syllables are needed, and that word-efficient, old-time New Hampshire natives pronounce it simply, “Mount Moose-lock.” 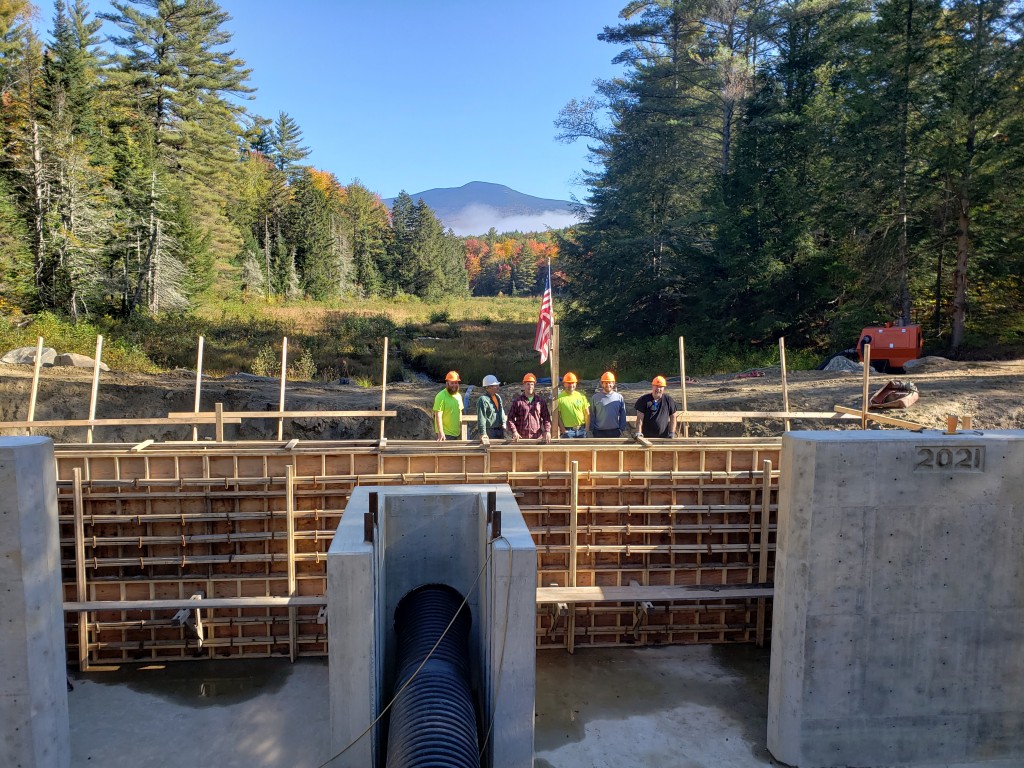 Dam construction crew with Mount Moosilauke in the background

The concrete trucks finally arrive after being stuck in a road closure detour. They spill their concrete into the hopper of a large pumper truck, which then pumps it up over and out into the forms, and the crew vibrates and settles it. After the concrete has cured, the forms will be removed and the dam backfilled. Stoplogs will be inserted, the water level of Weeks Crossing Pond will rise again to its prior level, and the popular fishing and recreation spot will be restored.  This artificial impoundment is located within property owned by the White Mountain National Forest, and the accessibility of the dam from the road will allow local and federal agencies to once again obtain water from the pond for firefighting.

When the last of the concrete forms are filled and the final truck has left the job site, we congregate for a late lunch. A grinning Fish and Game conservation officer drops by to check on the progress and joins our little picnicking group. A few minutes after his arrival, the Sasquatch emerged from the woods and crashed our lunch party. Was the Bigfoot that wandered into our encampment that day the real deal? Or was it a human in a Halloween costume filming an advertisement for an outdoor equipment rental website? I won’t tell. But I will answer the question of whether Sasquatch is an herbivore, carnivore or omnivore … it eats Pringles potato chips.