Looking to God As We Age 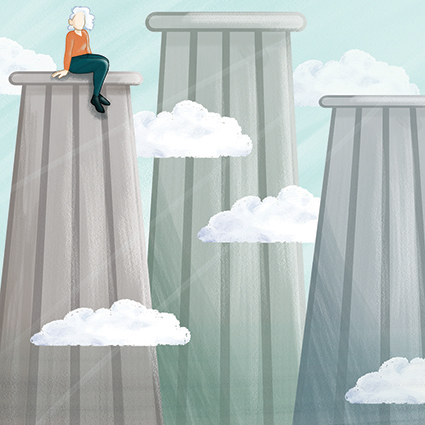 As the sands in the hourglass drain faster, the existential queries get deeper. And harder.

What is the purpose of life? Why are we here? What matters most? Are we alone or interconnected? What happens after I die? Is there an afterlife?

“Those questions relative to what is the meaning of my life become front and center,” says Linda Lea Snyder, an interim United Church of Christ minister serving on the Southern New England circuit and currently based at the Hampstead Congregational Church. “Profound questions can pop up,” she continues. “There is the inclination to address the part of you that is human and what that means. What does it mean to be in this world and to journey through this life? The questions do become deeper as people grow older. I don’t know if it’s time, the proximity [to death] or if you’re thinking about your mortality. There can be a reawakening, or a finding, that wasn’t there before.”

In the process of searching for answers, the doctrines and dogma of the organized religion in which one was raised and practiced devotedly for decades may no longer hold all the answers. These days, some seniors are searching, and they’re far more willing (and much more open than ever before) to embrace new or diverse paths as they travel along an individual spiritual quest.

A Pew Research Center Survey in 2015 discovered that 40 percent of boomers — that’s four in 10 — have changed their faith. Just 38 percent attend a weekly religious service, but 45 percent say they practice mediation at least once per week, and those percentages are increasing.

“Absolutely, yes, people are more open. We have values and we have beliefs and they bump up against life and they evolve,” says Lauren Smith, co-minister with her husband, Chris Holton Jablonski, of the Unitarian Universalist South Church in Portsmouth. “People do run up against ‘Oh, my God. I am now 70 and I have to think about what my life means and what my legacy is. I have to think about what it means to be vulnerable.’ Those are all spiritually demanding experiences. It’s a stage of life that presses people into some pretty intense spiritual reckoning,” says Smith.

“I would characterize it as something that comes with the threshold moments,” Smith continues. “This is a big threshold moment. These are the moments that naturally loosen people up. They wonder if what they are working with is adequate for the spiritual demands of their lives at this moment. That’s the moment where they naturally say, ‘Aha!’ Or maybe they’re just curious about it. They open up in ways to consider different things and reflect on the adequacy of the assumptions that they worked with in the past.”

Priscilla Caldon Flynn is the founder and director of Yoga Sanctuary in Litchfield and is a certified Kripalu Hatha yoga teacher. The qualified spiritual mentor sees an awakening in her students, many of whom are blending and enhancing their traditions as they practice mindfulness, which is the peaceful mental state achieved by focusing on an awareness of the present moment.

“I have students who are Jewish, Catholic, Buddhist, Unitarian, and are of all different faiths, or they’re agnostic and even atheist. I don’t have any Muslims that I know of, but I’d be thrilled if I did,” she says. “They’re all here to incorporate mindfulness into their individual belief system. They’re also very interested in the practice of meditation. Older people are definitely looking at their relationship with the Divine, however they define or conceptualize it, in newer or perhaps more expansive ways.”

There are also plenty of boomers who wish to remain true to the religion they’ve practiced throughout life, but at this stage desire to examine and experience it from a new vantage point.

Rabbi Jeremy Szczepanski of Temple Israel in Manchester says, “I have found in my rabbinate that at different life stages people have different life perspectives. There tends to be a good number of seniors who in many ways are experiencing a spiritual rebirth and a renewed sense of curiosity about their religion and their Jewish identity, and they want to see what it is that their tradition has to offer now.”

He adds that he’s known more than a few people who, “as they start to realize that the day is growing long, as it were,” begin to wonder if there’s more beyond this life and what our traditions may have to say about it. A lot of them, he says, are “very surprised to find out that there is a theology of the afterlife in Judaism.”

Though resurrection is at the center of Christianity, even the deeply devout ask some of the same provocative questions when confronting a serious diagnosis or contemplating the end of life.

Marc Guillemette, the director of the Office of Catholic Identity at Catholic Medical Center, notes that even though many find great comfort in the prayers and rituals of their youth, “They still wonder, ‘Where is God in all of this?’ They will ask, ‘Is there an afterlife? Am I going to see God? Am I going to see those who have gone before me?’ Those kinds of questions come up and they certainly become more important.”

The most recent Pew Center research, which was released in October, found that 66 percent of people 50 and older now believe in at least one of four so-called “New Age” tenets of reincarnation, astrology, psychics and the presence of spiritual energy in physical objects like mountains, rivers or trees.

“There is a much greater belief in reincarnation because so many people are so conscious,” says Caldon Flynn. “When I first started as a yogi, this idea was considered radical but now it is much more mainstream and is much more accepted.”

Her sage advice is to let go of the fear and allow the faith.