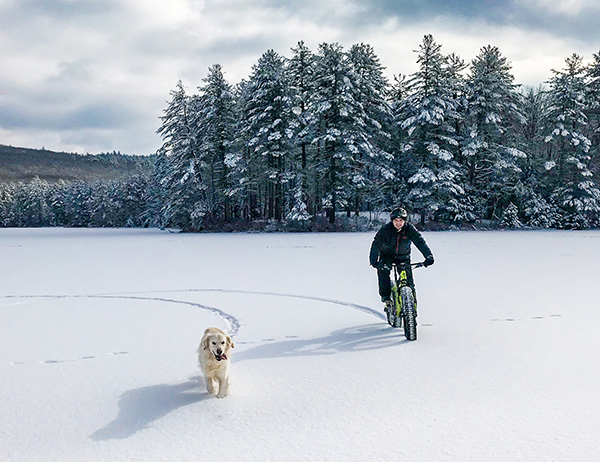 A fat biker and his dog make tracks on the frozen Goose Pond at Drummer Hill in Keene. Photo by Steve Holmes

In New Hampshire, after Thanksgiving, traditional snow sports rule. Whether the skis were skinny cross-country models, wider alpine planks or the broad platform of a snowboard, winter athletes have found their endorphin fix by gliding atop the snow.

Now, an ever-evolving breed of mountain bikes — dubbed “fat bikes” — is staking its claim to the hearts of outdoor enthusiasts.

“I’ve never been a huge fan of Nordic or skate skiing, so this provided me an outlet for winter exercise,” said Ray Orzechowski, a dentist and avid mountain biker from Concord. “Once you get on a fat bike, most people are hooked by the sheer fun element. It’s unlike any other riding experience, due to the playfulness of the bikes.”

Even diehard ski fans have fallen under the spell of these human-powered winter rigs.

“I’m a lifelong skier — alpine, alpine backcountry touring, Nordic touring, Nordic skate skiing — and initially resisted fat biking,” said Margie Lynch, who often rides the FOMBA (Friends of Massabesic Bicycling Association) trail network outside Manchester. “I had trouble imagining myself choosing it over skiing. And I was hesitant to take on the extra expense and hassle of buying another bike — my small shed was already housing four bikes.

1. Rent gear the first time. Many of New Hampshire’s ski areas and local bike shops offer rentals of fat bikes and safety gear, with rentals starting around $40 a day. Try it before you buy it.

2. Choose your day. The weather will play a big role in your experience. If it’s too cold or windy, you’ll be miserable.

3. The ideal trail is hard packed snow. Small patches of ice are okay — but treat any ice longer than the length of the bike with respect.

4. Trails are rated for difficulty. Choose easy or moderate trails when you’re just starting out, especially if you have no mountain biking experience. Start with short trails.

5. Dress appropriately. Wear warm winter boots and gloves or mitts with enough dexterity so you can change gears. You still need to wear a helmet so a thin hat or a headband is a good idea.  Padded shorts with leg warmers under an outer shell would certainly make the ride more comfortable.

6. Bring water or a drink to stay hydrated — in a thermos if it’s really cold so it doesn’t freeze.

7. Don’t forget energy bars and snacks. Working hard on the bike, you’ll use a lot of calories. You don’t want to burn out far from the trailhead.

8. The better physical shape you’re in, the more enjoyable the fat bike experience will be. Know your limits.

9. Share the trail. Many fat tire trails are shared with cross-country skiers, hikers and snowshoers. Stay out of the ski tracks and be prepared to pull over for others.

“Then I saw more and more of my mountain-biking acquaintances getting fat bikes, and then my boyfriend got one,” said Lynch. “At the same time, it was becoming increasingly clear to me that climate change was making good quality snow less reliable for skiing. And fat biking was a way to have fun with my boyfriend and other friends, and have more options at hand for a variety of conditions.”

Bicycles have long been considered by cyclists to be the key to eternal youth. It’s just about impossible to act like a prim, proper adult when you’re racing around under your own power. For years, since they first gained popularity in the 1970s and ‘80s, mountain bikes have been known as fat-tire bikes. That moniker made sense, particularly when you compare their wider, knobby tires to the thin, high-pressure tires of road bikes, which were designed for pure speed on asphalt.

Conversely, the “fat tires” of mountain bikes, ranging between 1.9 and 2.4 inches in diameter, were designed for the dirt and mud and uneven landscapes. They opened a new world — off road — to adventure seekers, and quickly became the darling of the “extreme” set. Today, though, a new generation of fat bikes is revolutionizing the concept of fat tires, allowing winter riders to pedal over the river and through the woods.

“Fat bikes are a great way to expand the riding season into the snowy and cold New England winter,” said Derek Griggs of Seabrook, a sales representative for Pivot and KHS, both of which produce fat bikes. “If the cross-country skiing is not very good, it’s often perfect fat-biking conditions.

“Fat bikes make people smile, and get them outside in the winter,” said Griggs. “What could be better?”

First developed for the grueling, multi-day Iditabike Race held annually in Alaska, fat bikes are taking mountain biking to an entirely different level and terrain. Previously, mountain bikers relied on studded tires or even chains to deal with snow and ice. Fat bikes, equipped with either 26-inch or 29-inch wheels featuring oversized tires ranging in diameter from 3.5 to 5 inches, have a much wider “contact patch” that help the bikes effectively float on snow.

“Fat bikes are like powder skis compared to all-mountain skis, in that they make softer surfaces — snow or sand — rideable because of flotation and traction,” said Griggs. “But just as you wouldn’t take your powder skis into an icy race course, fat bikes are not perfect for everything. The fat bike is most often an additional bike in a rider’s quiver, and might not see any riding between April and November.” 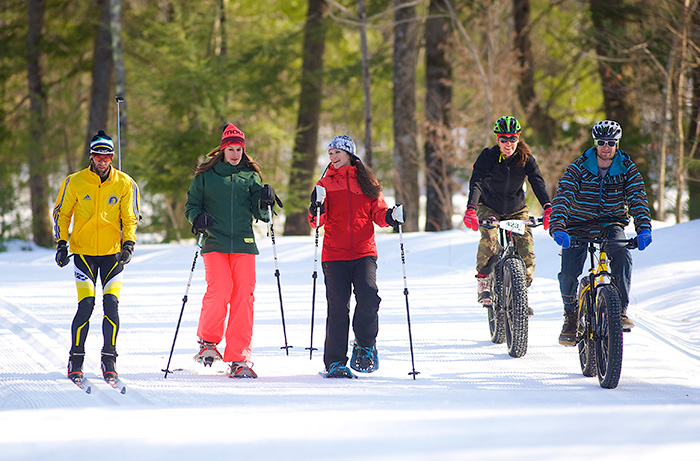 The “flotation” mentioned by Griggs is the result of the cushioning effect of the fat bike’s low tire pressure. Road tires will typically run between 100-125 pounds per square inch (PSI), and mountain bikes range between 25 and 60 PSI (depending on terrain and suspension choice). Fat bike riders, however, typically run their tires with less than 10 PSI, giving them a plush, more forgiving ride.

With their ridiculously oversized tires, fat bikes almost look like clown bikes, until you try one. Then you’ll be convinced. Many converts made the switch quickly, with little arm-twisting.

“I had several other friends that owned fat bikes,” said Jay Harrington of Campton. “I was skeptical at first, and said it was just a fad. After my first ride, which was on a rental bike, I bought my own.”

Former professional racer Tim Johnson, the first cyclist to pedal a fat bike up the Mount Washington Auto Road in mid-winter during a special Red Bull-sponsored event in early 2016, has made his living riding bikes of all shapes and sizes. Fat bikes, he said, are irresistible.

“They are just so much fun,” said Johnson. “It’s like a light tank.”

It’s an apt description. Fat bikes aren’t designed to be particularly fast. But with enough momentum, they’ll roll over just about anything.

“Fat bikes are amazingly stable, yet nimble,” said Philip Keyes, executive director of the New England Mountain Bike Association, which has six chapters in New Hampshire. “They offer incredible traction and control, and are extremely comfortable due to their upright posture and cushy tires.”

The bikes can be made from a variety of materials, including steel, aluminum, titanium or carbon fiber, and usually have disc brakes. You can find them with or without front and rear suspension, and in singlespeed and multi-geared models. Expect to pay anywhere from $700 up to $6,000 for custom models (the average is in the $1,500-2,500 range). Still, it’s hard to put a price tag on the joy they generate.

“You can’t help but feel like a kid when you got your first bike,” said Orzechowski. “They are surprisingly agile and easy to ride, and the suspension-like feel you get from the fat tires creates a less-jarring riding experience, which is much appreciated by this 54-year-old body.”

As Griggs mentioned, a fat bike is not a “one size fits all” pedaling machine. They aren’t ideal for every situation. For starters, they carry a weight penalty. While a race-ready mountain bike tips the scales at just about 20 pounds, a typical fat bike will weigh in the 30-35 pound range. And they can be sluggish.

“The larger tires add rotational weight and significantly change handling,” said Dan Dwyer of Auburn, vice president of NEMBA’s Southern New Hampshire chapter. “Both of these attributes make it very important to maintain speed and reduce acceleration and deceleration. Basically, fat bikes ride best if you keep pedaling, braking as little as possible, and maintaining as consistent a speed as possible.”

“The absolute best thing about these bikes and snow is that you can get into places not accessible in summer months, when the swamps and wetlands are not frozen over,” said Cilley. “The only upgrade I consider every year and will make at some point is to add a set of studded tires. Without them, I’m missing riding on frozen ponds when the wind sweeps them clean.”

“Riding with studs takes a lot of the anxiety out of the equation, especially when riding after a dusting of a snowfall on a freezing cold day,” said Cook. “You know there’s ice under there somewhere. It’s not a matter of if you’ll roll over it, but when.”

And, of course, there’s the dilemma of what to wear. The Scandinavians have a saying that New Englanders have embraced for centuries: “There’s no such thing as bad weather, only bad clothing.” Fat biking, like Nordic skiing, can be tricky, since participants generate considerable heat while exercising. So you’ve got to balance clothing that is warm but breathes, while providing adequate protection from the biting winds that occasionally rip through the Granite State.

There are other cold-weather considerations. Some winter riders outfit their handlebars with hand muffs to keep their digits toasty, allowing them to wear thinner, more flexible gloves. Many seasoned mountain bikers prefer the same clipless pedals that they use during the warmer months, while others opt for flat, platform pedals on their fat bikes.

“As a cross-country rider and former racer, I ride clipless,” said Dwyer. “Many riders elect to use flat pedals and non-cycling boots for warmth, and to prevent icing of the clipless pedal mechanism.”

Finally, remember that proper trail etiquette is just as important during the colder months as any other time of the year.

“Don’t ride in conditions that create tire ruts and ruin the riding experience for others,” said Harrington. “If ruts refreeze, it can take weeks for them to disappear.

“Two, if you have to get off the bike, don’t walk in the trail tread because no one likes riding over post holes,” he said. “A lot of effort goes into packing and grooming the trails. It’s important to be respectful of those efforts.”

After all, being the new sheriff comes with certain responsibilities.

When he’s not at his desk, long-time mountain biker and veteran freelance writer Brion O’Connor can usually be found pedaling any of one of his seven bicycles, any time of the year.