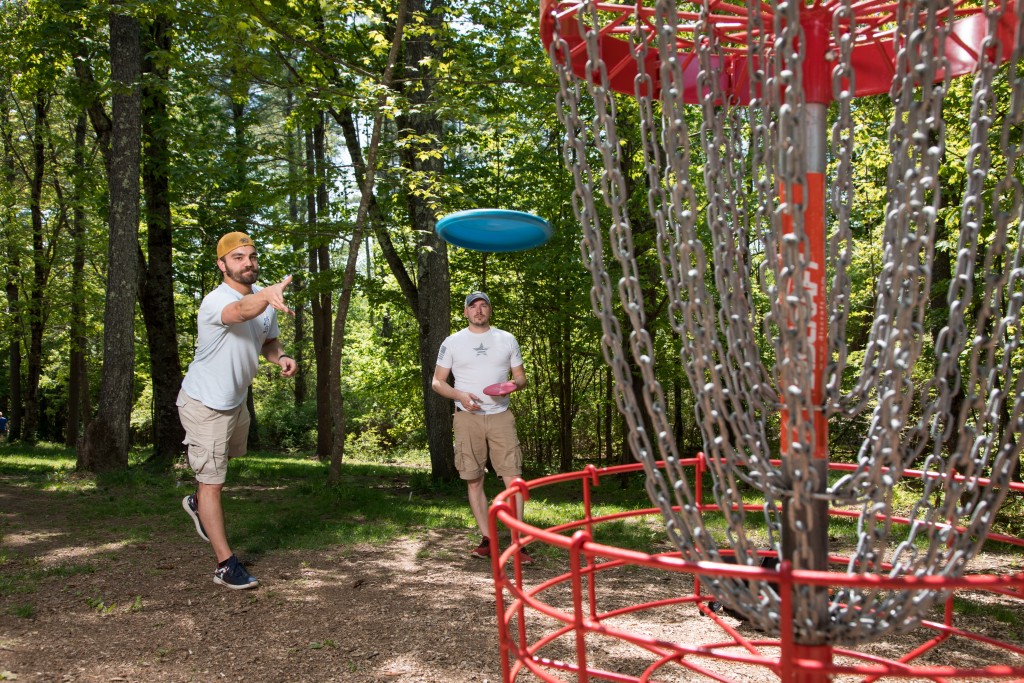 Whether you are a first-time disc golfer, a seasoned pro, playing solo or playing with friends or family, this course will leave you coming back for more outdoor fun. Photo by Kendal J. Bush

Throw a disc into a metal basket. Almost seems too easy, right? Despite its simple concept, disc golf, which has been around since 1976, offers fun challenges, and keeps picking up more and more traction with people of all types. Its easy, relaxed and inclusive nature is what drew Top O’ The Hill Disc Golf owner Marty Vaughn to the sport and inspired him to open up a course of his own on his property in Canterbury. “I’ve been playing disc golf since the early ’90s,” says Vaughn. “When we moved onto our farm, my family and I decided to build a course, and here we are 10 years later, still having as much fun as we did when we opened. The key to life is to keep moving, and that is what disc golf is and that is what it does for anyone who picks up a disc.”

The game is played by throwing a small, dense disc designed to travel long distances into a series of metal baskets situated on an outdoor course. The object is to complete the course using the fewest possible throws. The disc is thrown from a tee area to a target, which is the “hole,” and as each player continues down the fairway, they must make every consecutive throw from the spot where the previous throw landed. The terrain changes, and trees and bushes located in and around the course add challenging obstacles for the golfer to navigate. Finally, the hole is completed when the “putt” lands in the basket.

The year-round sport combines mental stimulation with a bit of aerobic exercise perfect to play alone or with friends. For Vaughn, it’s been a great way to meet new people no matter your age or skill level. “We have cooks, construction guys, attorneys, doctors, teachers, people stepping on the course for the first time, recreational players and seasoned pros playing with us,” he says. “Whether you are 3 or 72 years old, you can play disc golf. It’s a great lifetime activity and place for everyone to learn and have fun. You can be the worst disc golfer in the world, but you will still come off of the course smiling.” 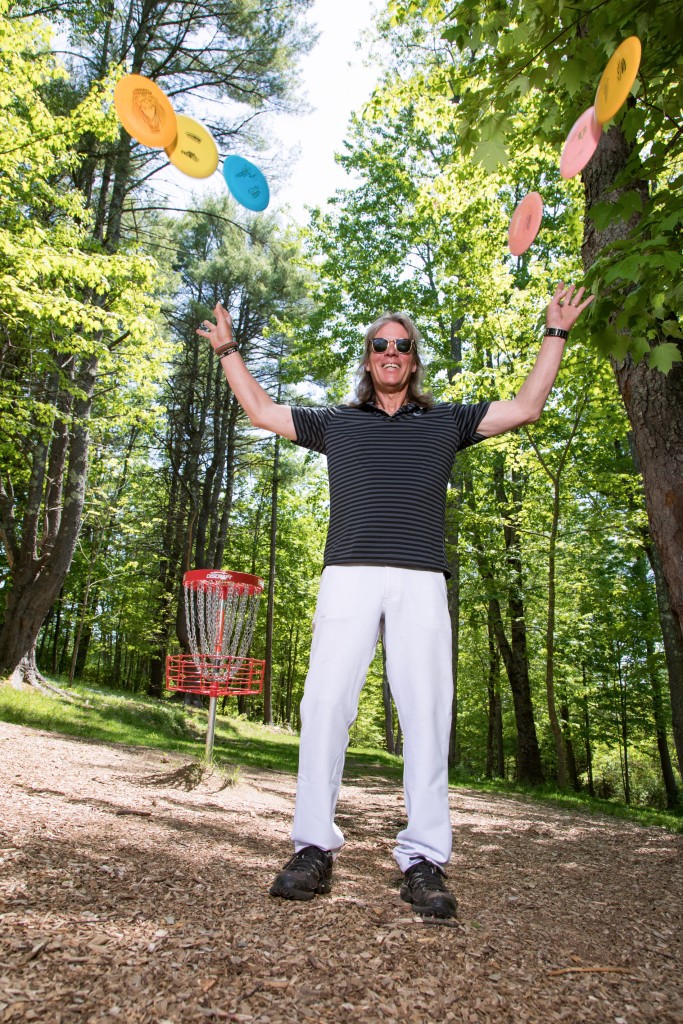 The four-season, 18-hole course is open seven days a week and is just $8 for one round or a full day of disc golf. Only five people can go out at a time for the proper flow of the course, but two to four people is the recommended number to play. If you are coming as a beginner, Vaughn has you covered. “I love being able to offer my time to teach and guide kids and adults through the game,” he says. “Our main rules are to be kind, respectful, and help each other out when we can. I noticed that people often showed up without their own discs, so I built a pro shop for us to give players access to loaner frisbees onsite. We also have pro guys who come a lot and offer advanced classes. At the end of the day, it is all about looking out for your fellow players and making sure we are all having the best time that we possibly can.”

When Vaughn isn’t helping out around the course or offering his free time to new players, he is busy playing through the Granite State Tour and Live Free and Drive Tour, a way for players around the state to come together and play the best courses throughout New Hampshire. “With over 35% of new disc golf players coming to the game from 2020, these tours are a great way to continue to grow the sport around the state and beyond,” says Vaughn. “They are a seasonlong series of fun yet competitive tournaments that cater to players of all skill types and levels, with a championship as the big finale to end the year. When other teams come to our course, it’s also an awesome way for us to host them and show them some true Granite State hospitality.”

After long days of cleaning up the course or organizing discs, it’s the camaraderie of the sport that keeps Vaughn going. “At the end of the day, I do this because I want to make people happy,” says Vaughn. “Seeing families come down hole 18 smiling and laughing makes all of the hard work worth it. I’ve been able to meet the kindest people through our course, and most of the people who come through become like family. People who want to throw frisbees in baskets are pretty cool.”

If you can throw a Frisbee and you like to have fun, you can play disc golf. Today, there are over 7,500 disc golf courses in the United States, and more than millions of people have played the game. Since 1976, there have been over 100,000 members of the Professional Disc Golf Association and players can compete in more than 3,500 sanctioned tournaments annually.

Objective of the Game: Disc Golf is played like traditional golf, but with disc golf discs instead of balls and clubs. One throw (stroke) is counted each time the disc is thrown and when a penalty is incurred. The goal is to play each hole in the fewest strokes possible. The player with the lowest total strokes for the entire course wins. The hole is completed when the disc comes to rest in a disc golf basket.

Safety First: Never throw when players or other park users are within range. Always give park users the right of way. Be aware of your surroundings and environment at all times.

Tee Throws: Each hole begins with a tee throw. Tee throws must be completed within or behind the designated tee area. 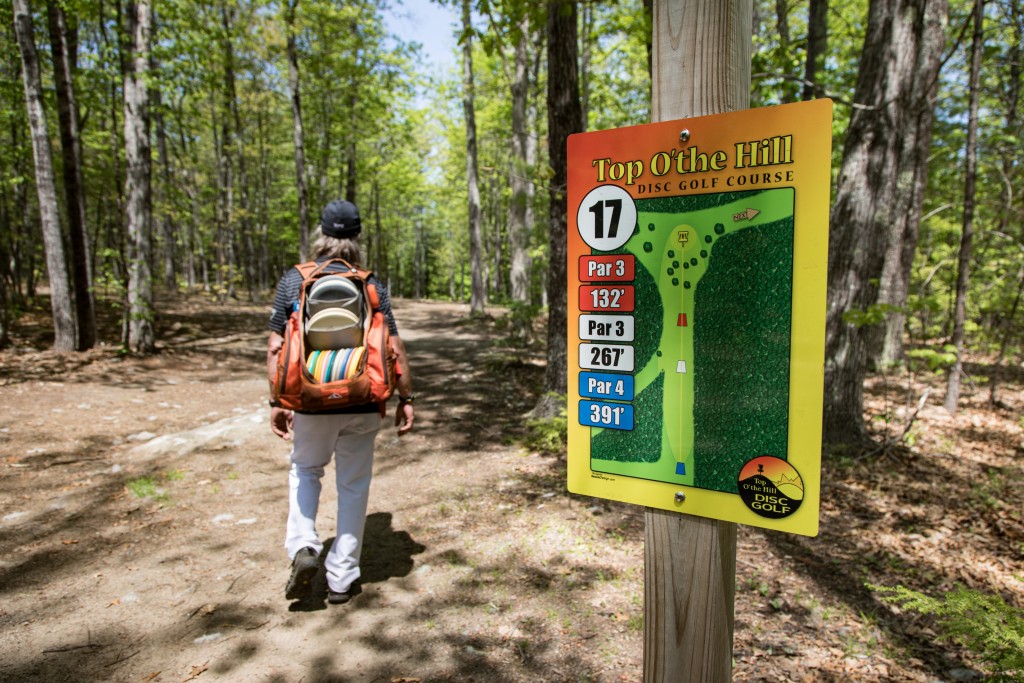 The 18-hole course is open seven days a week year-round and is only $8 for one round or a full day of disc golf. (Or play free when you buy two frisbees from the pro shop.) Photo by Kendal J. Bush

Lie: The lie is the spot where the player’s previous throw has landed. Mark each lie with a mini marker disc or leave the thrown disc on the ground where it landed. The player’s subsequent throw is made from directly behind the marked lie.

Throwing Order: The player with the least amount of strokes on the previous hole is the first to tee off on the next hole. After all players have teed off, the player whose disc is farthest from the hole always throws first.

Mandatory: A mandatory, or mando, is one or more designated trees or poles in the fairway that must be passed to the correct side as indicated by an arrow. If the disc passes to the wrong side of mandatory, either play from the previous lie or from a marked drop zone area, if applicable, and add a one throw penalty.

Completion of Hole: A disc that comes to rest in the disc golf basket or suspended in the chains constitutes the successful completion of that hole.

Out of Bounds: If any area of O.B. is visible between the disc and O.B. line, then the disc is considered O.B. A throw that lands out of bounds must be played from a point up to
1 meter in bounds from where the disc crossed over the out of bounds line. Permanent water hazards, public roads and most park boundaries are almost always out of bounds.