A mechanical marvel, hidden from view, marks the time and chronicles events through the ages at the top of the Congregational Church of Amherst 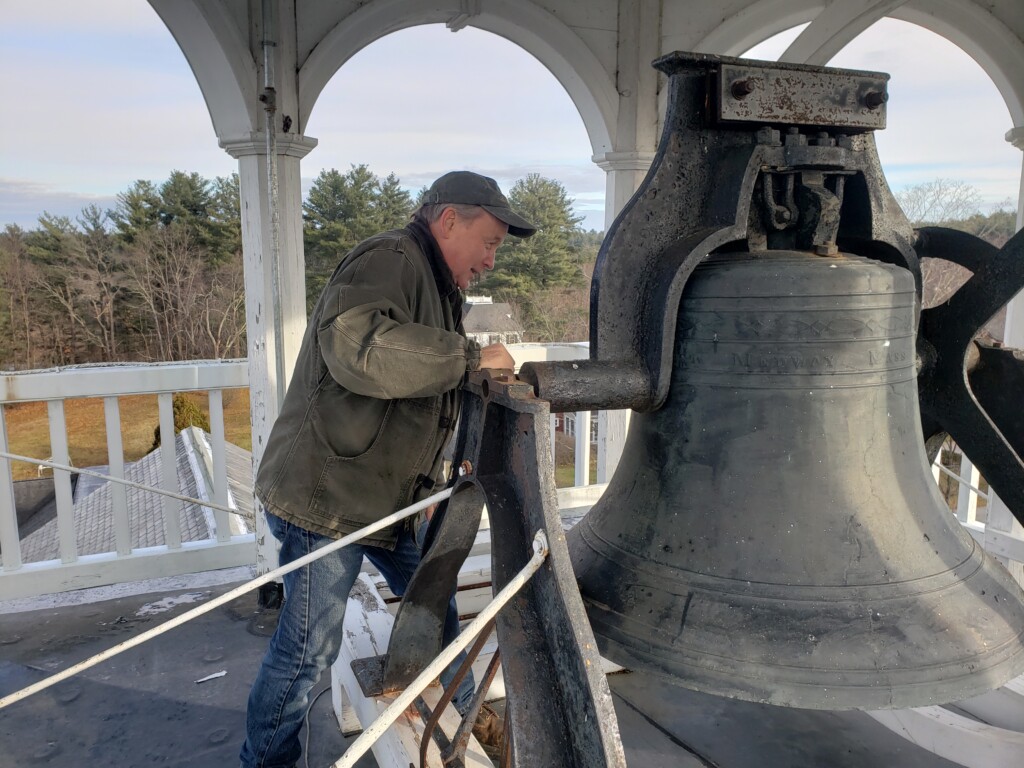 Making repairs to the exposed bell tower in the bitter cold, the writer is able to take in the view.

“War broke out in 1861 at Fort Sumter,” is scrawled across the wall in soapstone, written by an unknown timekeeper more than 150 ago. A different wall reads, “September 6, 1901, President McKinley kilt on this date.” Other memorable events, dates and names are written graffiti-like on the interior walls of this tiny building located inside the clock tower, inside the steeple, on top of the Congregational Church of Amherst. To gain access to this hidden building, I travel a series of switchback stairs that become steeper, narrower and ricketier with each turn. Referring to the steps as “stairs” is a bit misleading — the stairs gradually evolve into ladders. In places, steps are missing and my heart skips a beat as I feel across the gap for the next rung. Other than the beam from the flashlight in my teeth, it is dark as a tomb.

Upon reaching the tiny building, we open the narrow door and grope for the pull-chain light switch. After replacing lightbulbs we emerge from the darkness and I observe that the building is smaller than a shed, bigger than a doghouse and just large enough to shelter the gear mechanisms that work the steeple clock. Whoever constructed this tiny building centuries ago took pride in their work and labored to build something destined to last for a long time. Hand-chiseled mortise and tenon beams make up the bones of the structure and froe-split wooden shingles cover the roof, even though the roof is inside the steeple and never sees rain. A tier over my head is the belfry, which is open to the weather, so this building-within-a-building creates a secondary barrier double-protecting the 1818 clock mechanism against the elements, leaking roofs, pigeons and bats. 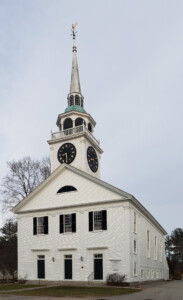 It’s 105 feet from the granite steps to the top of the weathervane. The steeple is made up of tiers: clock tower, bell tower, lantern, steeple, weathercock.

The mechanism gears not only turn the 5-foot-long clock hands, but they also operate a strike hammer that sounds the hour on the great bell, overhead. This entire mechanism is powered only by gravity. Two granite blocks -— weighing 400 and 600 pounds — are suspended on ropes and pulleys and attached to the clock gears. One weight powers the clock, the other drives the striking hammer and both need to be re-wound periodically. A system of gears, cranks, pulleys and a hidden cavity within the walls of the church allow one man to reel up the granite blocks and start them descending again. Gravity tugs on the weights and the gears release them, tick by tick, advancing the clock.

A porthole in the face of the clock — just large enough for my head — allows me to look outside and see the time displayed by the giant hands. Adjustments, such as for daylight savings time, can be made by turning cranks back inside the tiny building.

Continuing up the rickety stair-ladder to the next level, we emerge through a submarine hatch door onto the floor of the belfry. This area is exposed to the elements and a cold biting wind is whipping through, suggesting we not dilly-dally with our task. The view from this wide-open tower is spectacular, but not for the faint of heart. I’m told this steeple is the tallest in New Hampshire, 105 feet from the bottom granite step to the top of the weathervane rooster. Peering over the edge I can see our truck a long way down below. It still contains necessary items that we couldn’t carry on our first trip.

Navigating the steps back down becomes easier with the lights on and the doors open, but climbing back up with buckets of tools and supplies is a bear. Not wanting to make multiple trips, we overload and carry everything we anticipate needing and a lot of just-in-case items as well.

The lantern portion of the steeple is held up by eight white oak, octagonal-sawed timbers, which are continually exposed to wet and dry weather. That makes these timbers candidates for rot, so I’m assisting with inspections and preventative maintenance on these columns. Seams or cracks which opened are caulked and shields are installed to keep the weather off the timbers, while still allowing them to breathe. The timekeeper joins us, oiling the clock and greasing the axle of the bell. 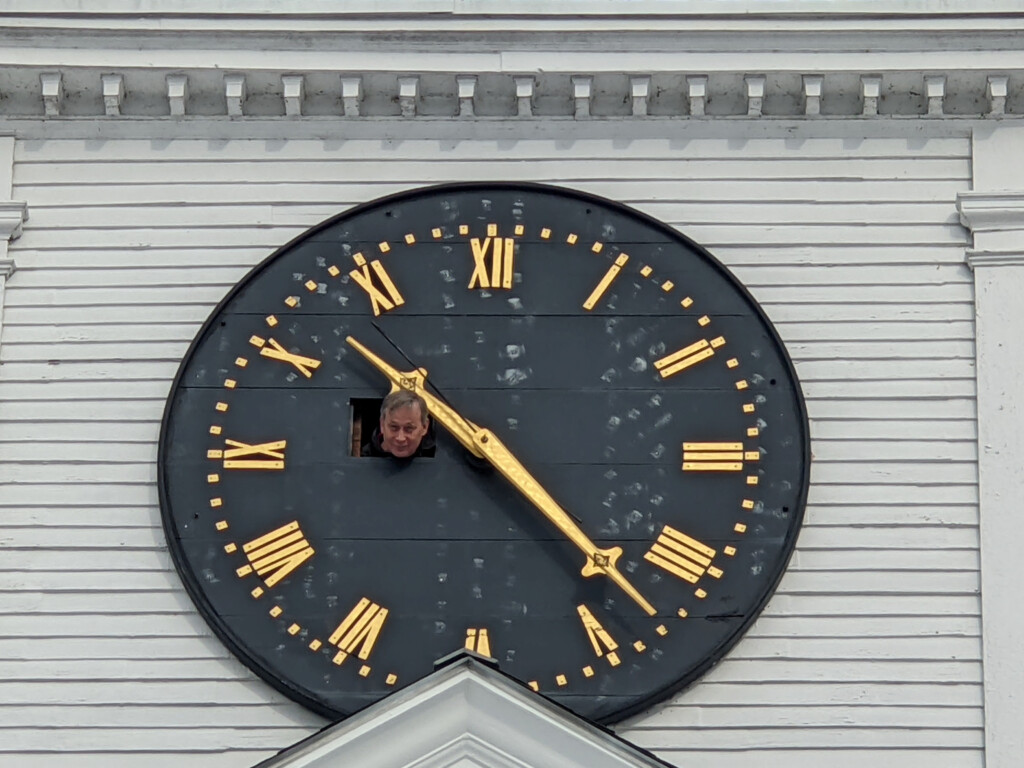 Marshall Hudson sticks his head through the porthole of the clock and quips, “If I don’t pull my head back in by 10:45, it could get messy.”

Because of the church’s dominating size and prominent location overlooking the town common, you might think that it has stood at this spot forever, but that assumption would be incorrect. Originally constructed as a meetinghouse by the town of Amherst in 1771-1774, the meetinghouse was sold in 1832 to the church, but the town retained ownership of the bell, clock, belfry, tower and steeple — even though it is physically attached to the church building. In 1836, approval was given to the church to move the building, including the town-owned portion. The entire structure was moved across the street and rotated 180 degrees to where it sits today. Incredibly, the clock never stopped ticking. 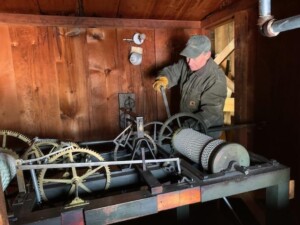 Inside the protective building, inside the clocktower, inside the steeple, Hudson turns the crank that winds
the rope and lifts the weights to power the clock.

“The old Congregational meeting-house in this town was moved in the last week from its former site to another, some rods distant, and turned round so as to face one end southerly to the common. The work, when commenced, was thought by some to be nearly impossible to be effected with safety to the building — but has been accomplished by Capt. Nathan Call, of Concord, with screws and tackle, with apparent ease and entire safety, so much so as that the high towering steeple, which has so long pointed us upward as the way to heaven, has not deviated in its line of altitude — and the clock has not ceased its monitions that time is hastening on and should be constantly improved.”

This same clock that did not stop during the move of 1836 still measures the passing of time today.

Not only has the clock been keeping time for over 200 years, but the tiny building protecting it has become an impromptu keeper of time with notations of dates and important events. Looking around one last time, I discover another soapstone note scrawled on the wall informing me the Civil War has ended. “War ceased fire 1865,” it reads. I close the door, extinguish the light and travel in darkness back down the rickety stairs, knowing that I’ve touched history in a unique time capsule.

Written on a hidden interior wall of the Congregational Church bell tower in Amherst is the message, “War broke out in 1861 at Fort Sumter.”