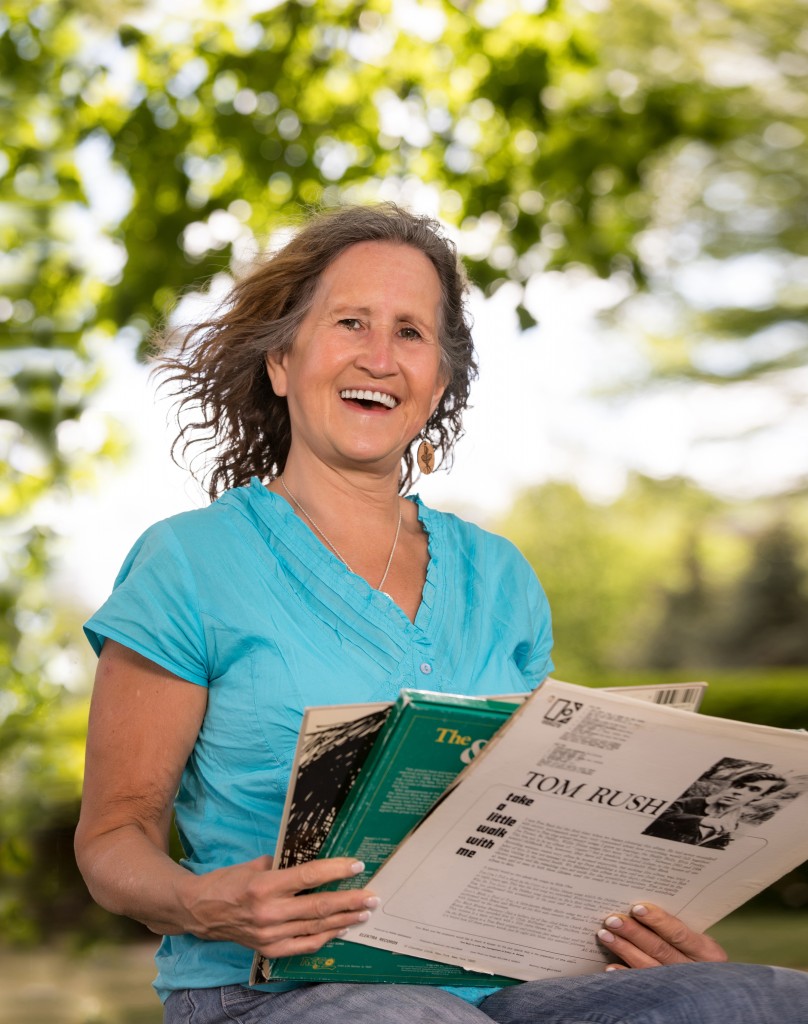 When I was growing up in southern New Hampshire, my family drove north to the Whites most weekends. Sunday nights, on the way home, my brothers would drift off beside me in the back seat while I watched trees or snowstorms fly by outside, and kept my ears on the radio. My dad listened exclusively to NPR, even though he was a staunch Republican, and on Sunday night that meant one thing: “The Folk Show.”

This was the early ’90s, when overproduced vocals and synthesizers were the norm in popular music, and hardly anyone knew what an organic vegetable was. What I liked about the music on “The Folk Show” was that the voices sounded like they belonged to human beings, and the instruments were recognizable too, undistorted and mostly unamplified. The songs sounded as though they’d been recorded around a kitchen table, not in some fancy L.A. studio. The lyrics smacked of everyday life, contained a poetry and a pith you didn’t hear elsewhere, and sometimes even touched on unglamorous New England places.

Eventually, I went off to college in Indiana, far beyond the range of NHPR, because it seemed like a place where bluegrass and old-time folk music — two things that interested me more than studying then — were part of the local culture. When I got there, I found some jam sessions in the small railroad towns, but I was mostly too shy to jump in with my guitar or banjo. I remember blushing my way through a rendition of “Rocky Top” while a friendly Hoosier redeemed the embarrassing scene with a masterful torrent of flatpicking on his Martin D-35.

After that, I just listened to more and more folk music in my dorm room during what became the most formative years of my life. The seed that “The Folk Show” had planted in earlier days sprouted in two important ways: The words of folk songs gave me my earliest real literary awareness, which ultimately made me want to become a writer; and their humane message helped me, more than perhaps any other single force, to set the terms on which I wanted to become an adult.

Kate McNally, who began presenting the show in 1995 (two years before I left for college), grew up in Alaska but was raised by a mom from Harrisville and a dad from northern Maine. They played old country records by Hank Williams and Eddy Arnold around the house. When her dad, a military man, was deployed on a remote mission to Turkey, McNally spent her second-grade year in New Hampshire. After leaving home and getting married, she lived in various places around the country before landing here again in 1978.

McNally already had two children when she enrolled at Keene State and got involved with college radio. “Everyone was listening to the Grateful Dead back then,” she says, “and those guys were playing a lot of old-time tunes. It was a gateway. By a fluke, the station had no acoustic program, so I offered to do one.”

The show was called “Fiddlesticks,” and it enabled McNally to develop and promote an interest in traditional folk music as well as the progressive bluegrass that had taken the folk scene by storm in the 1970s, giving us still familiar acts like Sam Bush and Béla Fleck. McNally has been instrumental in getting the best folk music, new and old, into New Hampshire ears ever since.

In those days, the Folkway — a legendary restaurant, music venue and all-around folkie hangout — was thriving up the road in Peterborough. “There were lots of acoustic venues in New Hampshire at the time, including contra dances, as well as local acts like Tom Pirozzoli and Devonsquare,” McNally explains. And on the seacoast the dean of New Hampshire songwriters, the late, great Bill Morrissey, was building a national following.

After college, McNally was hired by WKNE in Keene to do the overnight program and also started a Sunday-morning folk show, “The Lighter Side.” She eventually took the reins of a morning-commute program as well. “It was a real trial by fire,” she remembers. “I didn’t know anything about commercial radio.” When the station was automated in 1992, McNally was laid off and took a job, first with a center for teens with drug and alcohol problems and, later, with Monadnock Developmental Services. (She continues to work full time as a tobacco treatment specialist at the Norris Cotton Cancer Center in Lebanon.) But she’d been bitten by the radio bug, and when she was invited to work weekends for a station in western Massachusetts, she went for it. There she came into direct contact with a wider arena of singer-songwriters and hosted some of them on the air. 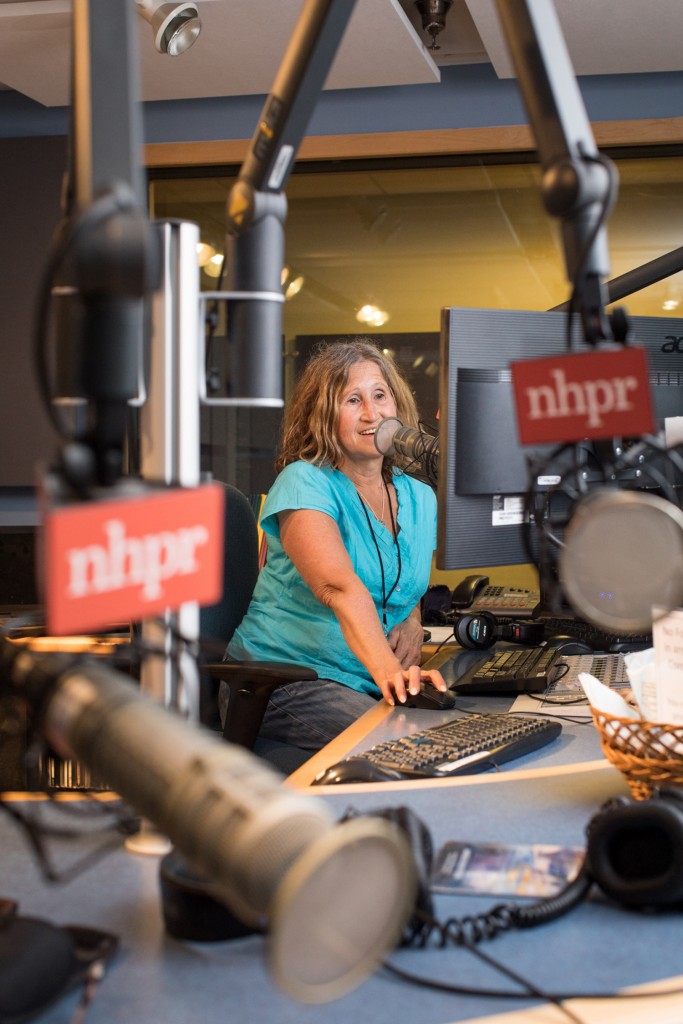 Kate McNally has hosted “The Folk Show” on NHPR since 1995. Photography by Kendal J. Bush

Unbeknownst to my teenaged self, listening in the back of my dad’s Subaru, NHPR’s long-running “Folk Show” nearly went off the air altogether shortly before McNally took over. Her smooth voice and warm manner, matched to an impressive knowledge of a musical genre whose recording history reaches back a century, grabbed listeners’ affection and attention as folk music grew in popularity again. Her new position at the mic of a statewide broadcaster saw her being sent out to emcee live shows at venues like the Brewster Academy Festival and the theater of the Peterborough Players. These live events brought her into contact with her audience in a way that being alone in the studio never had.

This sense of community was driven home in 2003, when McNally’s house in Marlow caught fire and she lost everything, including her pets. New Hampshire folk musicians and their listeners came together to organize benefit shows to help rebuild. “It was a big boost,” she says. “It was heartwarming to feel so supported, and it enlarged the world.”

In recent years, the “NH Folk” Facebook group has enhanced listener participation in the program itself, despite the technoskeptic streak of many folk music fans. “The Folk Show” can still only be heard live; programs are not recorded, which means you’re either there or you’re not, just like in the old days. When all the bonds of space and time feel like they’re slipping, I find something steadying about this. It also reinforces the sense of being part of a community, as the Facebook group comes alive with real-time conversation at 7 p.m. every Sunday evening, music-themed emojis and all.

With COVID shutting us all inside for much of the past year, I’ve had an especially acute sense, when tuning in from Littleton, that I’m sitting around with friends in a New Hampshire-size living room, while McNally spins us all records by the likes of fellow Granite Staters Wendy Keith and Julie Snow, Maine’s Cormac McCarthy and David Mallett, old standbys like Hazel Dickens and Pete Seeger, and even some emerging local talent.

My parents still live in southern New Hampshire, and every few weekends I drive down to see them. “Why don’t you spend another night?” my dad will often say, as the twilight creeps into Sunday afternoon.

But I tell him I can’t, and that he’s to blame. I tell him I’ve got a meeting with my car radio at 7 sharp — for a northbound drive along memory lane.

Bob Lord’s “Playland Arcade” — A beach day for the ears 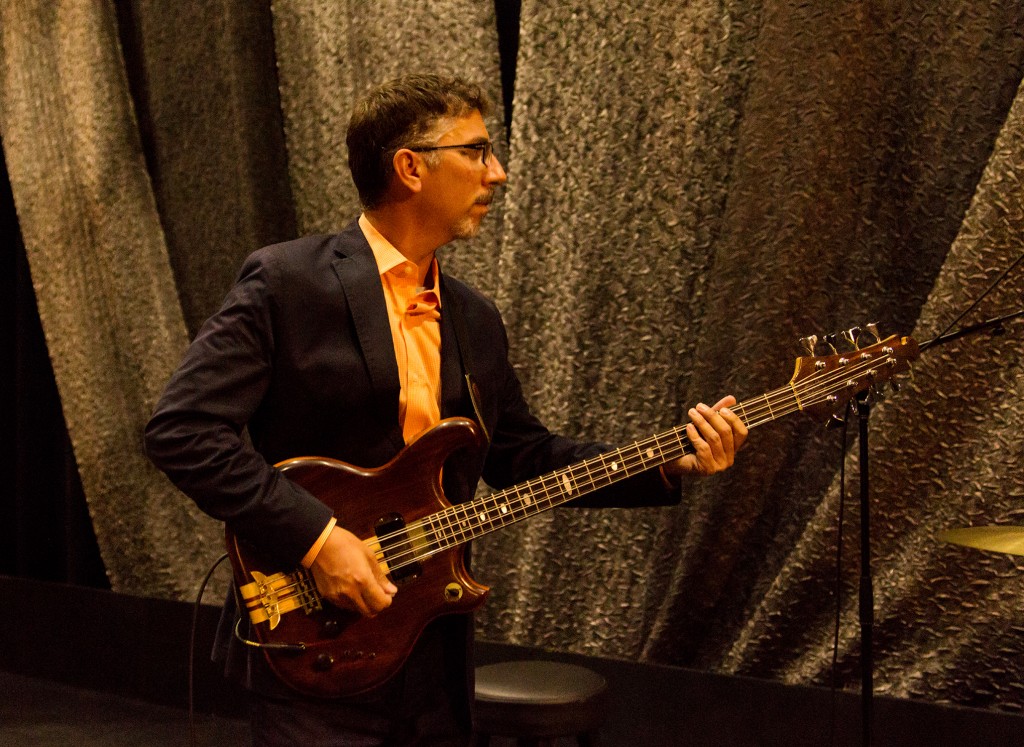 Playland Arcade is in some ways a love letter to Hampton Beach and all the insanity and inanity that is New Hampshire,” says Bob Lord, founder of the Seacoast-based experimental rock band Dreadnaught and CEO of neoclassical music label PARMA Recordings.

His band has graced the stage with celebrities ranging from Dan Brown to Stephen King for the Music Hall’s long-running “Writers on a New England Stage” series in Portsmouth, and he collaborated with rocker Pete Townshend for an expansion of The Who’s musical legacy in the double album “Method Music,” so one realization almost came as a surprise to Lord regarding his latest release.

Just like the sensory treats of a walk on the boardwalk at Hampton Beach, the musical explorations on “Playland Arcade” range in texture and flavor from the smooth sweetness of soft-serve ice cream to the salty grit of beach sand, and one, an homage to legendary purveyor of beach food Blink’s Frydoe, even conveys the sugary yeastiness of the state’s favorite fair food.

The virtuosity of musicianship is ensured by Lord’s own fluid precision on the bass and by the roster of talent he attracts, like drummer Jamie Perkins (from the Billboard chart-topping group The Pretty Reckless) and keyboardist Duncan Watt (composer for the multiplayer online game “League of Legends”). Oh, and toss in the Czech Republic’s Moravian Philharmonic orchestra and percussionists recorded in Havana, Cuba — both collaborators Lord picked up in his role as a globe-trotting collector of new sounds for PARMA.

In his liner notes, Lord writes, “This past Summer of 2020 was the first in my memory when I wasn’t able to visit “Playland Arcade” — my favorite place on the strip … So while I await a return to the boardwalk I’m sharing this music with you.” For information or to purchase “Playland Arcade,” visit boblordmusic.com. — Rick Broussard