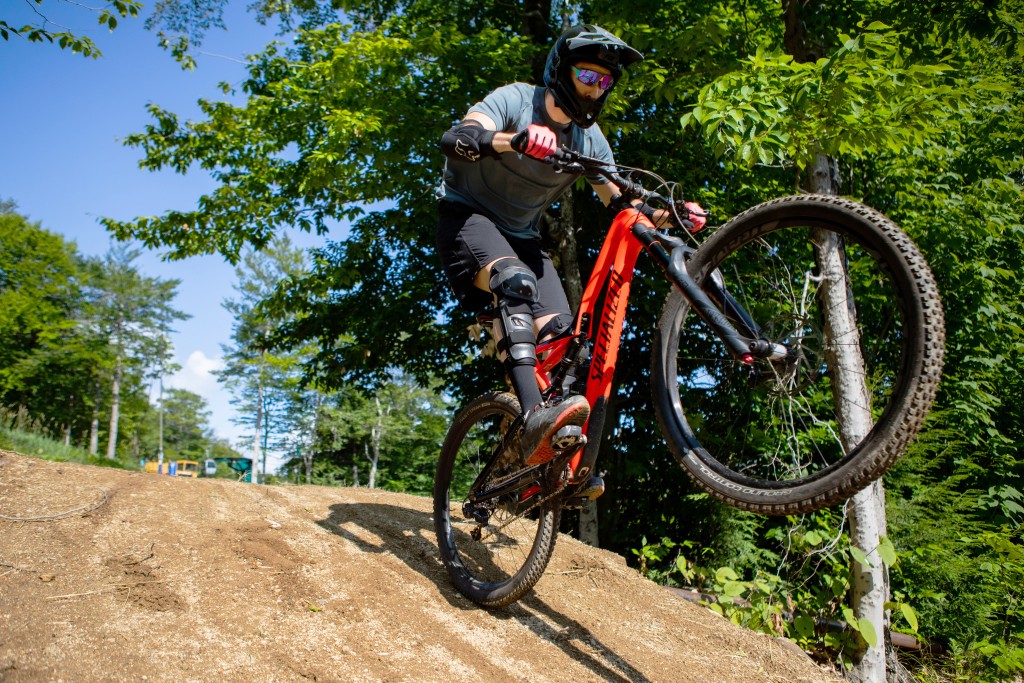 Loon Mountain debuted a new mountain bike park in the fall of 2019, and is hard at work creating even more trails. Photo Courtesy of Matt Hinkley, Loon Mountain Resort

The beauty of sticking around for six decades is that you get to see things change. Take mountain biking. As a youngster, I thought every bike was an invitation to adventure. My friends, my brothers and I rode our two-wheelers over almost any surface — asphalt, dirt trails, homemade jumps. Bikes meant freedom, opening up our world to explore. We were only limited by our young legs and daylight. And even sunsets could be overcome.

I continued pedaling through college, mostly between the University of New Hampshire and Manchester to visit my girlfriend. In the late 1980s, I was a young, single professional when newfangled “mountain bikes” lit up society’s sporting milieu. These trail-specific rigs were rugged and incredibly cool, capable of tackling a crazy variety of terrain. We no longer had any excuse not to ride, because mountain bikes made any condition “riding weather.”

That was particularly true in New Hampshire, with the state’s rocky, twisted terrain. Parks like Pawtuckaway and Bear Brook, and quasi-public lands like the undeveloped acres surrounding Lake Massabesic near Manchester or Hopkinton-Everett Reservoir outside Concord, became amusement parks for our fat-tire forays.

Ski resorts quickly picked up on the sport’s popularity. They had the terrain and the vertical that endorphin addicts craved. They also had the infrastructure — namely, chairlifts — that allowed riders to focus less on cardiovascular climbs, and more on the explosive excitement of heeding gravity’s call. Early adopters were Loon Mountain and the now-defunct Temple Mountain.

Unfortunately, after an initial surge of interest, mountain biking numbers began to decline at ski areas. The early 2000s saw many areas abandon the financial burden of running the lifts (though many kept trails open for those hardy souls who kept pedaling uphill).

Now, like finding an old flame on Facebook, many ski areas are taking another look at mountain biking. One — Highland Mountain Bike Park in Northfield — went all in, creating a dedicated knobby-tire nirvana from the skeleton frame of a defunct ski area. Waterville Valley has taken a more traditional approach, resurrecting an existing trail network and local hill to make both fat-tire friendly. Two more — Cranmore Mountain in North Conway and Loon Mountain in Lincoln — transformed existing terrain into spectacular “flow” trails designed to accentuate gravity and the new generation of downhill bikes. (Attitash in Bartlett offered lift-service mountain biking as recently as 2019, but hasn’t resumed service since being acquired by Vail Resorts.)

Unlike my first mountain bike — a fully rigid black-and-neon-pink Trek Singletrack 970 — these burly downhill steeds have plenty of suspension front and back. Wheel size has increased, from 26-inch to 27.5 or 29, and the tires themselves are wider, providing better grip.

Back in the day, it was a point of stubborn pride for mountain bikers to climb hills under their own power, thereby “earning” their downhill thrills. That same trait requires a serious masochistic streak today if you’re aboard an enduro bike. These rigs are heavy, built to withstand the rigors of downhilling. Once you get them dialed in, they can fly.

Decades ago, my cycling buddies would hold our annual Boyz Weekend in North Conway, taking advantage of a friend’s ski house and the outstanding trail network developed by the White Mountain chapter of the New England Mountain Bike Association. During one recon session, we hatched a plan to pedal up Hurricane Mountain Road (one of the steepest paved roads in New England), and then pedal over Black Cap and down the face of Cranmore.

Cranmore’s machine-carved trails, designed and built by Chris Lewando of Tyrol Trails in Jackson, are an absolute hoot. Smooth and zigzagging endlessly, the three main routes — the expert Stembogen, intermediate Day at the Beech and beginner Learning Curve — feature high-banked turns that reward confident bike handling and controlled momentum. All are serviced by the South Chairlift, which connects the mountain bike trails to the resort’s main lodge.

“Most parks catered to the avid rider,” says Wilcox. “It’s interesting, since the ski industry started by catering to the avid skier and then realized they needed to teach people to ski to grow the sport.

In the same vein, Cranmore offers lessons for riders ages 8 and older, so everyone can get in on the action, safely.

True confession — my worst racing biff happened at Loon. I was competing on a rental rig after wrecking my own bike. Following a tortuous climb, the course turned onto one of Loon’s access roads, a screaming descent. At one curve, the road went right, but I went straight into the woods when the bike’s sweat-soaked handlebar grips flew off.

Miraculously, I walked away with just superficial bruises. It would be a while before I returned, as the resort’s interest in mountain biking waned. These days, however, I can’t wait to get back to Lincoln. In the fall of 2019, Loon unveiled its fabulous new mountain bike park. Like Cranmore, this network of machine-built flow trails is the culmination of a multiyear effort.

“We spent almost four years planning, plotting, permitting and consulting with various outside resources long before the first shovel of dirt was ever moved,” says Brian Norton, Loon’s vice president of operations. “We knew we had an opportunity to build a great bike park from scratch.”

Loon succeeded. The network — serviced by the Seven Brothers chairlift at the base of theOctogon Lodge — features greater variety than Cranmore, with more terrain planned for this year and next.

Construction will pick up this summer where the excavators left off last summer. Norton says, “The planned trails will directly connect the downhill network into our cross-country network as well as to the new Kanc8 lift that will be constructed next summer.”

Phases two and three “will include some faster technical terrain with steep turns, rollers and jumps that will keep the serious riders coming back for more,” says Norton. “We want the experience to be a great one, from beginner to expert. We want grandpa to be riding the green flow trail with his granddaughter at the same time Mom, Dad and the college-age twins are having fun on the blue jump trail.” 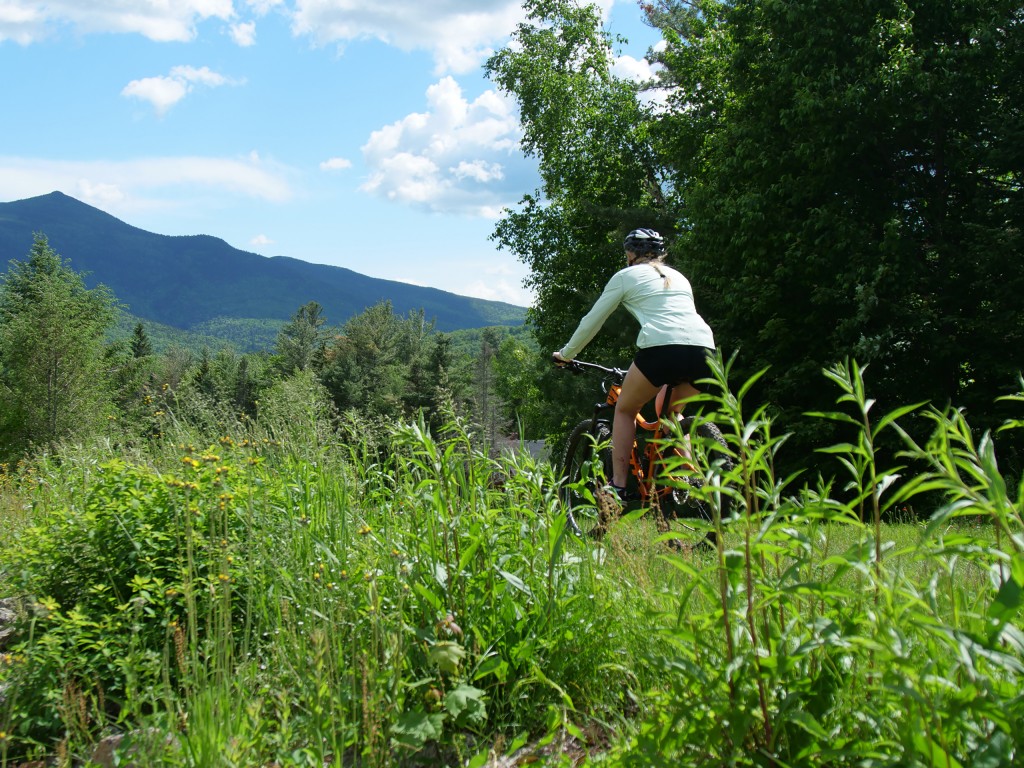 Some 25 years ago, I learned a valuable fat-tire lesson at this resort tucked away in the White Mountain National Forest. I had started racing, quickly jumping from “beginner” to “sport” categories because “sport” races were twice as long.

Predictably, doubling the distance meant twice the effort, and I wasn’t prepared. Plus, Waterville Valley was one of the most technical courses I’d ever ridden, with rock gardens and wheel-swallowing gullies and mud pits. But the course challenged me as I chased better racers who revealed the skills needed to handle obstacles that looked impossible to ride. I finished the race exhausted, but inspired.

A quarter-century later, the rough-hewn trails snaking around Waterville Valley haven’t changed much. I say that with great admiration. I love the “old school” vibe of this resort, which dates back to 1868 with Greeley’s Mountain House. The 9-acre Snow’s Mountain was Waterville Valley’s original ski hill, before Mount Tecumseh opened in the 1960s. A recommitment to the hill and its chairlift has enabled the resort’s Adventure Center to use the lift during the warmer months.

“We do see a large number of families using the lift to introduce their kids to mountain biking,” says Ian Cullison, the Adventure Center director. “They can get a lot more mileage out of their day when they don’t have to pedal uphill.”

Cullison says many area lodges offer a Freedom Pass, entitling them to a two-hour bike rental and one lift ride each day. Perhaps the best part of Waterville’s trail system is that even the most popular trails can be accessed without using the lift, thanks to the gravel Livermore Road that runs along the north edge of the network.

“So, on days when you have some extra energy to burn off, you can do the climb manually and then ride the lift on your next run to get a different perspective,” says Cullison.

Two decades from now we may look back and call Mark Hayes a mountain biking visionary.

“In 20 years, the bike park industry will be as big as the skiing industry,” says Hayes, a founder of Highland Mountain Bike Park. “Keep letting people know until it sinks in. They just have to start building.”

That’s what Hayes and Will Gaudette did, opening Highland to the mountain bike crowd in 2006. This hill is a part of a rich history of ski areas that couldn’t overcome the vagaries of Mother Nature and capricious energy costs, eventually shuttering in 1995. Now, the hill is enjoying a second life, reincarnated as a mountain biker’s version of Disney World. (I’ve always thought Mount Whittier alongside Route 16 in West Ossipee, which closed in 1985, would have made a great mountain bike park as well.)

What Highland lacks in amenities — the lodge and rental shop are fairly rustic — it makes up for with spine-tingling terrain, with 29 flow and technical trails covering nearly 600 feet of thickly forested vertical (in addition to 11 contiguous cross-country trails), five jump and skill parks, and an indoor training facility. Make no mistake — this can be an intimidating place for beginners.

Highland’s base area is usually teeming with fully armored riders, making the place look like a “Mandalorian” movie set. There are the enormous manmade jumps designed for big-air competitions (in full view of the spectators gathering on the base lodge deck), while most of the flow and technical trails are hidden by the evergreens and hardwoods.

Though the park advertises five beginner and six intermediate trails, those ratings are relative (older published reviews show Highland terrain as 5% easy, 35% moderate and 60% difficult, though the park has created more introductory terrain over the past decade). Half the mountain is still rated “most difficult” and “extremely difficult.” Those ratings assume that Highland puts a premium on instruction, and it does. The “Find Your Ride” program offers a true “judgement-free zone” with one-hour sessions highlighting the characteristics of enduro bikes and the basics of safe downhilling.

Highland’s coaches are knowledgeable and attentive, providing constant encouragement. The chairlift ride reveals some of the more jaw-dropping elements at Highland, including hair-raising drops, nosebleed jumps and vertigo- inducing wooden berms. Most trails, however, do have “escape routes” that skirt the most difficult sections.

Categories: Family-friendly things to do, Guide to Summer, Seasonal Guides – Spring, Things to Do