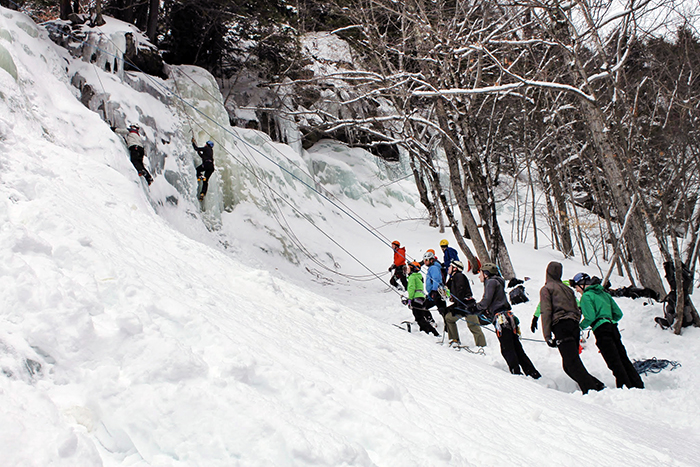 I was curious when my brother Sean, a Concord surgeon, started ice climbing. Here was a man with a crazy busy life at the time — a high-pressure medical practice that often required weekend shifts in the emergency room, plus a growing family with three children under his roof, which meant a dedication to the clan’s first winter love, skiing.

“So why add ice climbing to the mix?” I asked.

“Because when I’m on the ice, I’m not thinking about anything else,” Sean replied with a grin. “Every single thought is totally about the next move.”
That, in a nutshell, is the allure of this sublime, sub-freezing pastime. It requires total concentration and total absorption with each movement and each “thunk!” of an ice ax or crampon. And one happy byproduct is that life’s pressures tend to melt away.

“All climbing is more of a mental game than a physical one, but ice climbing is the most cerebral of them all,” says Keith Moon, climbing school manager for Eastern Mountain Sports in North Conway. “We’re climbing frozen waterfalls that in a few months — maybe even days — will turn back into a running waterfall. It is an interesting feeling climbing something so ephemeral. You need to be 100 percent focused on what you’re doing.”

Granite Staters have a well-earned reputation for embracing winter, which is another reason why ice climbing is a great fit. Being outdoors in spectacular locations — places like North End Cathedral outside North Conway, The Flume in Franconia Notch, Frankenstein Cliffs and Mount Willard in Crawford Notch, Champney Falls off the Kancamagus Highway and Huntington Ravine on Mount Washington — can energize us during winter’s short, cold days. But the sport is also a tremendous way to keep fit.

“Ice climbing is the perfect complementary activity for folks around the Northeast in the winter,” says Moon. “Sometimes we have booming snowfall, and other times hardly any. I love to ski as well as climb. Thankfully, around here, the conditions choose what I should do. If we get a big snowfall, we grab our skis. If it hasn’t snowed in a bit, the ice is probably ripe for climbing. If you haven’t tried it, you’re definitely missing out.”

A common misconception, says Moon, is that ice climbing is tantamount to doing a series of pull-ups. Instead, it’s more of a complete body workout.

“People think you need to have a strong upper body to climb,” he says. “Having strong legs and core is a much better attribute. Your legs are what propel you upward, while your arms act as balance. Folks of average fitness are more than capable of trying and enjoying the sport.

“Ice climbing is a good way to keep up your ‘global strength’ throughout the winter,” he adds. “It’s more of a strength activity than an aerobic one. Swinging ice tools, kicking in your crampons and using your core to hold yourself in combine to make a surprising, fun workout.”

Another bonus is the variety that ice climbing delivers, and the resulting puzzle that climbers must decipher. Conditions can change dramatically depending on just how far the mercury has fallen, and the transitory nature of ice makes for a constantly shifting landscape. In short, routes are rarely the same from climb to climb.

“The ice is always changing,” says Jamie Leahy, owner and lead guide of North Ridge Mountain Guides in Bethlehem. “How cold was it yesterday? How much snow have we gotten lately? How popular is this climb? All of these things — and more — affect the conditions. A route that is climbed often can become ‘hooked out,’ where the ice has almost a set of steps in it. That condition is much easier to climb than fresh, untouched ice.”

Brad White, co-owner of the International Mountain Climbing School in North Conway, says the ice becomes more brittle the colder it gets, and can shatter below 20 degrees.

“Above 20 degrees till about 40ish, the ice becomes softer and is actually easier to climb until it hits a mush and fall-down point,” he says. “The amount of minerals in the ice can also affect the solid nature of the climbing.”

To the uninitiated, ice climbing, with its ropes, crampons, axes and myriad screws, bolts and carabiners (known as “pro,” for protection) can look incredibly intimidating. In reality, it’s a sport that can be learned incrementally, allowing participants to build on the skills they develop with each session.

“We at IMCS are able to take people of all abilities climbing both on rock and ice,” says White. “The steeper the ice, the more upper body fitness is required, but everybody can climb something and be challenged.”

Beyond regular exercising, you can also hone some ice-climbing skills at home — or maybe more accurately in the garage. “The way to practice your [ax] swing is to attempt to drive a nail into a board with both hands, left and right,” he says. “Then you’re ready to hit the ice.”

Leahy agrees, saying: “Ice climbing can have many different levels of difficulty, and we always make sure that we pick appropriate climbs so we can be successful. We start off on some easier climbs to learn the fundamentals, and then work our way up if we need or want to.”

Most experts agree that ice climbing, unlike rock climbing or bouldering, is best suited for climbers who are at least in their teens, due to the strength and coordination required to confidently wield an ice ax. However, there doesn’t appear to be an upper end of the age scale.

“One of the things I really like about ice climbing is how wide the range of climbers is,” says Leahy. “I’ve had folks from 14 to 70 on the ice, and at all levels of fitness. Not all ice climbs are 500 feet of vertical. There are plenty of lower-angle climbs that are much more doable for a wide range of people.”

If you’re just starting out, don’t worry about the equipment required. Instead, sign up for some lessons with a reputable climbing outfit, which will supply not only the guides, but the necessary gear as well.

“Double boots, crampons, harness, helmet, ice tools and all technical gear needed are included in course cost,” says White. “If properly clothed, most people stay warm and comfortable. We also rent clothing. We always work with people with individual needs and make sure they have a great day.”