Where Powderhounds Unwind in the Granite State

Admittedly, I’m my father’s son. Which means I understand that skiing (and snowboarding) is only half the fun of a day spent on the slopes. The other half? Après ski, of course.

I absolutely love skiing and snowboarding, because they make the drudgery of shoveling out the driveway and the white-knuckle rides almost palatable. These sports encourage us to embrace the cold and snow, and all the challenges that come with the elements. Skiing and snowboarding make us feel more alive in the dead of winter.

So what could be better than sharing those experiences with a host of other folks who think and feel the same way? Skiing and riding, in many ways, are about community. We don’t need any frills or drinks with little umbrellas. All we want is the ambiance created by the shared experience. And it’s difficult to find a better sense of camaraderie — swopping high fives and tall tales — than at a great pub. That’s après ski in a nutshell.

While “après ski” means different things to different people, I’m partial to the pubs found at the lodge, where you can finish your last run, kick out of your bindings, climb a few steps and order an ice cold beer or cocktail of your choice. As my friends in real estate like to remind me, it’s all about location, location, location.

Chances are, you’ll find a respectable bar at almost any decent-sized ski area in New Hampshire, from Goosefeathers Pub at Mount Sunapee and The Sled Pub at Pats Peak in Henniker to Ragged Mountain’s Stone Hearth Bar at the Ole Red Barn (grab a Ragged Red Ale from the Flying Goose Brew Pub) and the Ptarmigan Pub at Attitash. If forced to pick just a handful, though, here are my top half-dozen.

A Granite State original, the Paul Bunyan Room at Loon Mountain’s will always have a spot reserved in my mid-winter heart, in part because my brother Sean is one of the “Loon doctors” who work hand-in-glove with the resort’s ski patrol. Situated atop the Octagon Lodge, just a short stroll from the First Aid station and the gondola, “the Bunyan” is a classic post-ski meeting place, with plenty of draft beers and a boisterous atmosphere fueled by locals who know an outstanding après ski spot when they see one. Across Loon’s parking lot, at the Governor Adams Lodge, Babe’s Blue Ox Lounge (get it?) is a decent Plan B.

The Cannonball Pub at Cannon Mountain’s Peabody Lodge is another New Hampshire institution. Cannon is a skier’s mountain, and the Cannonball Pub reflects that. Nothing fancy, just plenty of rugged winter enthusiasts sharing exploits on Cannon’s Front Five, surrounded by memorabilia, great beer and good music. Speaking of pubs with history, Zip’s Pub & Grill at Mount Cranmore is a total throwback. The legendary Hannes Schneider would look right at home bellying up the bar, nursing a beer stein and looking out longingly over the slopes he helped make famous.

The Onset Pub at Crotched Mountain has partnered with Henniker Brewing to create a yummy signature IPA called “Rocket Fuel,” named after the mountain’s high-speed lift, the Rocket. Given Crotched Mountain’s superb night skiing, however, the Onset is considered by many to be more of a mid-ski respite. Waterville Valley’s Schwendi Hutte is another great mid-day stop, but my wife and I have spent many an afternoon at T-Bars, or chasing our kids around Buckets Restaurant.

Come spring, it’s hard to top the deck at the Wildcat Pub at Wildcat Mountain, where you can savor a seasonal draft Tuckerman Brewing Company, Moat Mountain Brewing Company and Switchback Brewing Company, among others. Wildcat is typically the last ski area in New Hampshire to operate lift-serviced skiing and riding (often into May), meaning the pub is a natural spot to work on your late-afternoon tan after enjoying those late-season turns.

Much like slopeside pubs, the number of quality après ski bars within a short drive of New Hampshire ski hills is dizzying.

While the competition for “the best” ski pub remains as lively as ever, there’s one that continues to stand head and shoulders above the rest. The Red Parka Steakhouse & Pub in Glen, near the divergence of Routes 16 and 302, is easily accessible from Wildcat, Attitash/Bear Peak, Black Mountain and Mount Cranmore (not to mention Tuckerman Ravine in the springtime). Expect a crowd and a good time. The restaurant is pure rustic North Country, but the pub is really where the action is. The place is a veritable ski museum, with its walls and ceiling adorned with skis, posters, trail signs, old license plates and even an ancient two-person chair lift. But the vibe makes the place special. If you’re lucky, owner Terry O’Brien will be at her perch at the corner of the big, U-shaped bar. Stop by and say “hi,” but be prepared to chat for a while. You’ll love every minute.

Beyond burgers and beer

Since man doesn’t live by fresh beers and burgers alone, we ought to point out that New Hampshire ski country also has a number of excellent distilleries and wineries to explore during your après ski romps.

Staying on the east side of the Kancamagus Highway, the Wildcat Inn & Tavern in the village of Jackson is a cool spot, with exceptional fine dining to the left of the main entrance, and a good ol’ saloon to the right. Open-mic nights here are a blast. The Shannon Door just off Route 16 is another Jackson gem — a cozy Irish pub with live music in the afternoons, a solid variety of beers, and cooked-to-order pizzas that are a Mount Washington Valley highlight. The Moat Mountain Smokehouse & Brewing Company in North Conway is housed in a beautiful white Colonial, appearing to be more fine dining than brew pub. Don’t be fooled. One sip of any of the numerous brews available here, including Square Tail Stout, Cathedral Ledge Lager or Bone Shaker Brown Ale, and you’ll know these guys are the real deal. Three more North Conway hot spots — Delaney’s Hole in the Wall (winner of the Conway Daily Sun’s Best Après Ski award in 2017), McGrath’s Tavern, and the tasting room at the Tuckerman Brewing Company — are also highly recommended.

If you’re up by Loon Mountain in Lincoln, be sure to check out One Love Brewery. Ski country got a big boost in 2015, when Jennifer and Michael Snyder relocated their German lager house and gastropub from Dover to the historic Henry Paper Mill. Michael Snyder’s upbringing in England and Germany is reflected in his award-winning brews, including an IPA, Czech pilsner and a deep-red marzan, plus a number of tasty single malt and whisky offerings. The food is a worthy match. Don’t pass on the burgers or the Firecracker Nachos. Another hip Lincoln spot for foodies is The Gypsy Café, where you can sample eclectic entrees ranging from a Peruvian Orange Peanut Stir Fry to Moroccan Shrimp and Bavarian Salmon, while I also have a soft spot for The Common Man, a true New England tavern.

Nearby, the Woodstock Inn Station & Brewery in North Woodstock has been brewing its own craft beers for two decades. Coupled with a family-friendly restaurant (with an enormous menu) and inn, the brewery is one-stop shopping for the thirsty powderhound. The seasonal brews, like Kanc Country Maple Porter, are a real treat. And that’s not taking anything away from their everyday offerings, such as Red Rack Ale, 4000 Footer IPA and Pig’s Ear Brown Ale. To the north, past Cannon, is the Schilling Beer Company in the funky outpost of Littleton. This brewery/brewpub has an impressive selection of “progressive continental European-inspired beers,” including a dry, spicy Abbey-style Erastuc, a Bavarian-style golden Paulus, the dark, complex Georg lager, a Czech pale lager named Alexndr and a tart pale ale called Konundrum. Match any with a wood-fired pizza. Or bring a 64-ounce growler home with you. 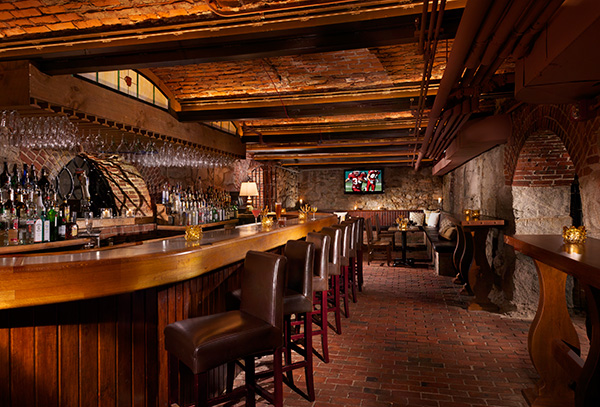 The Cave at the Mount Washington Hotel in Bretton Woods. Courtesy photo

For something truly unique, and a chance to peel back the decades, visit the stately Mount Washington Hotel after a day at Bretton Woods, and find a quiet table at The Cave. This Prohibition Era speakeasy has been beautifully restored, while preserving all the nostalgia of a Gatsbyesque hideaway, including the old stone walls and a terrific bar. More romantic than raucous, but perfect if that’s what you’re in the mood for, The Inn at Thorn Hill in Jackson is another great escape — check out the wine cellar.

And since we started with my Irish heritage, I’ve got to bring things full circle and give a shout out to Murphy’s on the Green in Hanover, a short hop, skip, and jump from the Dartmouth Skiway and Whaleback in Enfield. Dad would have loved this place.