There’s history to be found everywhere in the Granite State, but here are some of the historic events that went on to shape and change our country and our world.

Legend for this map (click here for our Google map that includes more important historical places).

1772 The Pine Tree Riot, Weare: Ebenezer Mudgett, a liquor merchant, led this protest against the British king, inspiring future rebellions within New Hampshire (including the pivotal gunpowder raid at Fort William and Mary), and, it’s speculated, the Boston Tea Party.

1774 Powder Raid at Fort William and Mary, New Castle: Considered one of the (or simply the) first major acts of rebellion leading up to the American Revolution.

1811 Manifest Destiny, Amherst: Horace Greeley, the founder and editor of the New-York Tribune, is born in Amherst. Though it’s not proven, he’s generally credited with writing the famous slogan “Go West, young man, and grow up with the country,” one of the main Manifest Destiny catchphrases.

1872 Concord Coach, Concord: The first of these famous coaches was built in this year. The “coach that won the Old West” transported people and goods across the West and starred in many classic Western movies. 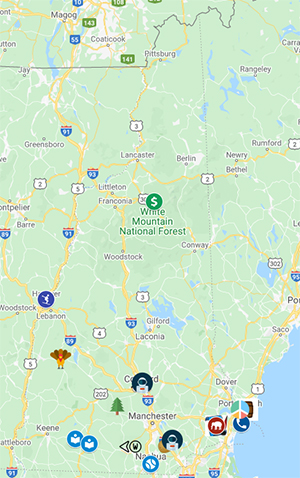 Want to find the places mentioned here (and more)? Check out our Google map that contains these and additional historic locations.

1853 First meeting of the Republican Party, Exeter: On October 12, 1853, Amos Tuck called a meeting in Exeter, allying the political parties opposed to the Democratic Party and proposing the name Republican.

1961 First American to Travel in Space, Derry: East Derry’s astronaut can actually claim two firsts: In 1961, Alan Shepard became the first American to travel into space, and then in 1971, he accomplished another first (and probably only) when he whacked a golf ball on the moon. Local Henniker Brewing Company’s pale ale “Miles & Miles” commemorates this odd piece of space history as Shepard once said his golf ball went “miles and miles and miles” above and across the lunar surface.

1986 Christa McAuliffe Is the First Private Civilian in the History of Space Flight, Concord: The Concord High School teacher died with the rest of the crew on January 28, 1986, 73 seconds and 48,000 feet after liftoff.

Categories: Destination NH, What Do You Know