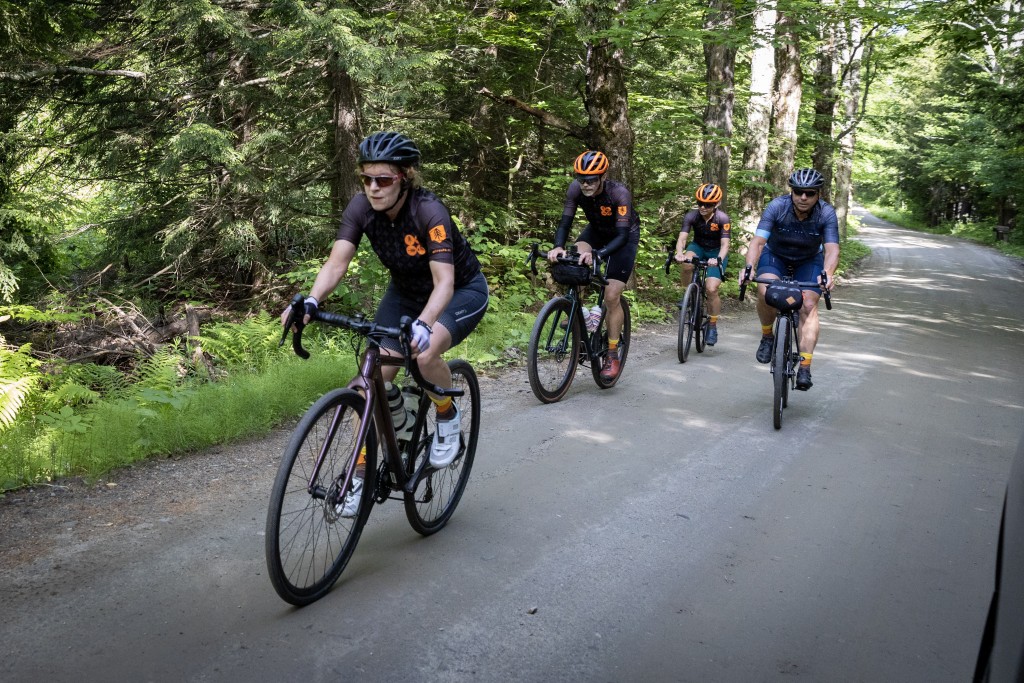 Modern bikepacking bags are spacious, lightweight and weatherproof, and designed to fit on your bike without detracting from its handling characteristics, which is important if you’re pedaling with a group. Photo by Christopher Zigmont

I’ve always assumed my affinity for autumn was connected to my being an October baby. I love the cooler temps, the absence of irritating bugs, and, of course, the kaleidoscope of colors. When my childhood cravings for adventure turned to two-wheeled treks, I appreciated that there were generally fewer cars on the road compared to the summertime.

But fall cycling — specifically touring in New England — has its own idiosyncrasies. The sun drops quicker, and it typically takes the temperatures with it. Leaf peepers can still clog major roads, which is why, more and more often, I’ll take the road less traveled. In order to meet those challenges, cyclists eager to start touring need to heed certain precautions, and make certain preparations.

For those trips, we tapped Christopher Zigmont of Exeter, owner of The Alternate Route, a boutique outfitter that organizes handcrafted adventures called “Small Batch Cycling.” The 57-year-old Zigmont has been immersed in the cycling world, spending “more than 25 years providing neutral racing service at the world’s biggest and smallest races, from the Olympics and the Tour de France to the Portsmouth Criterium.” The Alternate Route, he says, was formed during the pandemic, when many people couldn’t get their bikes fixed, with “the mission of providing field trips, provisions and service for adventurous riders.”

Here are his “top tips” to make sure your next multiday pedaling adventure is a successful one.

Zigmont’s knack for thorough planning dates back to his childhood.

“I was a Boy Scout, and I still carry lessons I learned as a young teen,” he says. “I’ve always camped. I really believed the Scout motto, ‘Be prepared,’ matters. It’s easy to get into trouble when you’re not prepared, and easy to have a great time when you are.”

Zigmont’s best pre-ride advice falls into two categories — you and your bike. The key question is this: “Are you both up to the adventure?”

First is the rider (since it takes longer for the human body to get ready for a long jaunt). Ideally, you’ve been pedaling, and can ramp up the mileage in the weeks before your multiday trek.

“Plan additional ride time to accommodate for rest stops if you’re worried about the distances,” says Zigmont. “Remember that riding with 20 or more pounds of gear takes additional effort, so best not to aim for your longest journey yet unless you’ve trained for it.”

Still, don’t be discouraged if you haven’t been riding as much. Just be sure to adjust your expectations accordingly. “It’s plenty fun to do as little as 25 or 35 miles a day for your first outing,” says Zigmont. “There’s great satisfaction in multiday rides, and arriving at each destination with your wits intact keeps it enjoyable.”

Second is your trusty steed. The old adage “A good craftsman never blames his tools” applies. Responsible cyclists don’t fault their bicycles for mishaps. Zigmont recommends having your bike tuned properly. Pay special attention to brake pads, a crisp chain and cassette, tire wear, and inspect all the parts with bearings. If you’re running tubeless tires, check the sealant.

“Personally service what you confidently know how to do, and get professional service for the rest,” he says. “You really should become intimate with your tires and wheels, and how to service them. Know how to repair your chain. When you’re touring or bikepacking, your bike will be under higher loads than normal. Knowing how to use the tools for these two repairs is critical.”

Gear is an essential component of bike touring. While the basic bicycle is still celebrated for its simplicity and elegance, a multiday ride is anything but simple. That’s especially true during autumn in New England.

“Your gear list will vary depending on several elements of your planned trip, including proximity to civilization, paved versus unpaved, duration of your trip, lodging type — hotel or B&B, hut, tent — your geographic region, and seasonal weather,” says Zigmont. “If you’re on an organized tour, you may have to carry very little, as the tour operator will look after you. Self-guided or with an operator, you should be ready for at least the basics.”

In today’s high-tech landscape, electronics rule. Until you don’t have a signal. There’s no substitute for a map and compass (and the skill to use them). However, today’s GPSs (Global Positioning System) are fabulous.

“I won’t start a journey without my Wahoo Elemnt Roam, my cell phone, a compass, and the best paper map of where I am going that I can find,” says Zigmont. “If there’s any chance I’ll be away from cell coverage or I am riding alone, I take a Garmin InReach Mini, and a couple back-up batteries to keep it all running. 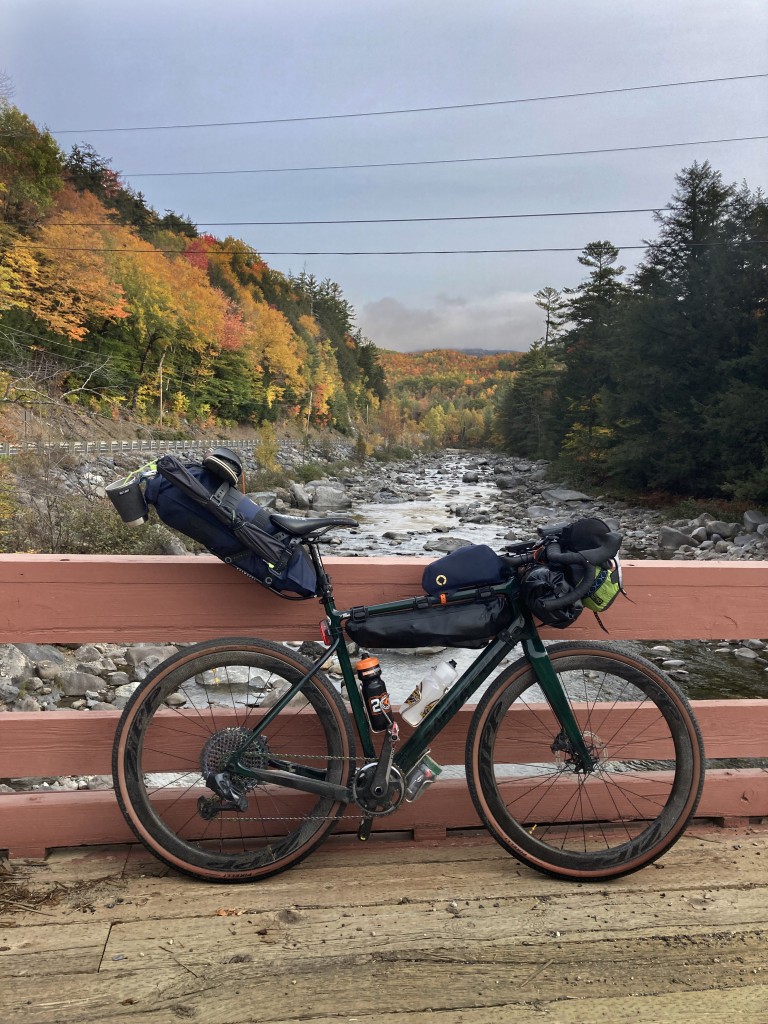 “I like plotting my routes in ‘Ride with GPS.’ Strava has a decent route plotter too, as does Gaia,” he says. “But I like Ride with GPS best since it’s searchable for routes, easily shareable, and it’s heavily used by cyclists who adventure, so there’s quite a library.”

Let’s put lights under the electronics umbrella. “Even if your plans don’t include any nighttime riding, you need lights,” says Zigmont. “At minimum, have a front and rear blinky so you can be seen by traffic.

“I recommend adding at least a 500-900 lumen light for seeing things at dusk or later, because rides don’t always go to plan,” he says. “Additionally, I bring a Petzl headlamp for camp set-up and trailside repairs.”

Next up, bags. These are not your father’s panniers. The old-style panniers, both front and back, sat on racks hovering over your wheels. Today’s minimalistic, lightweight, weatherproof bags sit inside or on top of the bike’s frame, or mount to your seatpost and/or handlebars.

“If you’re with a highly organized outfit who is doting on you, a simple bar bag or a frame bag will be enough to stuff a rain cape, snacks and essentials,” says Zigmont. “I still keep all my critical tools and spare tube in a seat pack. Keeping things dry and organized matters most, as well as maintaining safe handling on your bike. I’d recommend bikepacking.com as an excellent resource for bag selection.”

Clothing choices should reflect the vagaries of fall weather. You’ll want variety. I’m a huge fan of knee and arm warmers, which can be quickly stripped on to accommodate fluctuating temperatures. A taped rain jacket (preferably Gore-Tex, with removable sleeves) and pants are a must.

“I never bring more than two pairs of riding shorts,” says Zigmont. “I’m wearing one while one is drying from last night’s washing. I wear wool because I can use it for several days. Wool socks, two pairs for riding, one thicker pair for hanging out. Wool T-shirts and base layers too. You can go multiple days and not stink. A riding jersey or two, with the same rotation as the shorts.”

Don’t discount nutrition either. Having plenty of water, and easily digestible foods, is vital for a good day in the saddle.

Perhaps the single biggest factor to guarantee a gratifying multiday ride is getting a good night’s sleep. Know your comfort levels, and choose your lodging accordingly.

“Inns and lodges can provide lightweight ‘credit card’ touring, with warm beds, hot meals, and a chance to clean up. But roughing it is nice as well,” says Zigmont.

“I do like tenting it. With a single-person tent and a light down sleeping bag, the penalty is only a couple pounds of decent dry comfort. And the upside is the opportunity for genuine solitude.

“There are plenty of ‘glamping’ opportunities out there — Hub North in Gorham or Trailside Stays micro cabins in Dorchester,” he says. “I like hipcamp.com to find yurts, cabins, shelters, and glamp tent places.”

Who to go with

Finally, decide on the number in your posse. A solo ride? Small group? A large crew? All can work, but all are different.

“Many of the well-known tour groups offer many different sized groups,” says Zigmont. “I’d suggest that smaller is better, or a small group riding at your pace. Three to eight is magic when you can all ride together, helping each other along. I’ve ridden with one or two friends and that’s nice too — great for bonding and building friendships.”

When choosing a tour outfit, consider “your expectations for an experience and your budget,” says Zigmont. Key questions to ask yourself are: Is the focus on big miles or mountains, great food and wine, or connecting with friends? Do you need a bike and gear, or are you ready to go? Do you want to help craft the route, or rely on others? In short, do your homework on tour companies, and weigh the reviews of each.

“As for The Alternate Route, we mostly build small custom experiences, designed around what you’d like to do,” says Zigmont. “Most of our clients are moderate-to-experienced riders that don’t like large groups or things overly produced.