Fending off the automated annoyances 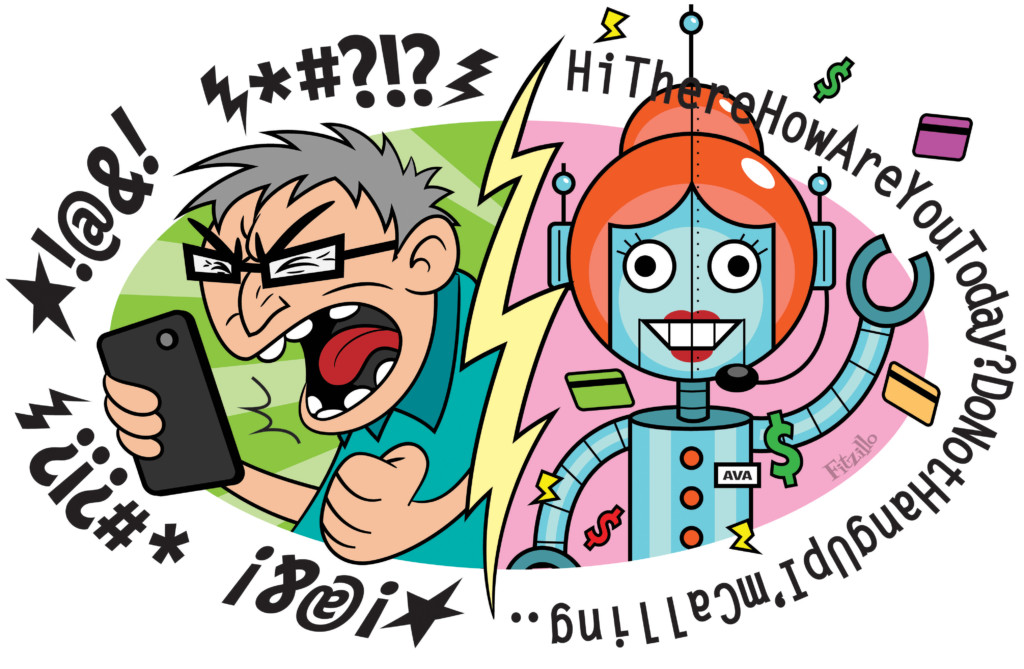 I once had to listen to a high school principal tell me I was an “angry young man.” But that was long ago, and I have changed since then. I’m no longer young. And the older I get, the more I find cause for anger, or at least annoyance. Because there are more people pestering me, and they have greater technological means of pestering. The pests don’t even have to call you anymore — they have robot voices do it for them.

Just the other day a female voice, named Rachel, I think, from card something-or-other, called with news about my credit card account and how I could lower my interest rate. I might have said, if the voice could listen, that I have no credit card debt because I have never owned a credit card. Therefore I couldn’t possibly lower my noninterest on the nondebt not arising from the credit card I’ve never had. No card, no debt; no debt, no interest. It’s that simple. “Hipso fatso,” as Archie Bunker used to say. If Rachel’s voice had ears, I might have suggested to them that Rachel might be better employed at some other task, like finding Amelia Earhart or Jimmy Hoffa or Iraq’s weapons of mass destruction.

Then there is the voice of another woman, Jessica maybe, that calls every now and to tell me the good news: I have been preapproved for a student loan. Well, that is surprising and Jessica’s voice sounds quite excited about it. I’m not. The last thing I need is a loan. Even without a credit card, I have managed to accumulate debt. As Rabelais put it, “I owe much, I have nothing, the rest I leave to the poor.” And a student loan? Now that’s a stretch. I know Rodney Dangerfield went “Back to School” in the movies and went around the school looking for the faucet of middle age. But for me, approaching old age would be a youth movement.

Another voice named Vanessa called to offer something that would help with “chronic pain,” though I am quite sure unwelcome telephone solicitations by robot voices are not among the chronic pains Vanessa’s voice has in its automated mind. The same voice called again the very next day, reminding me of, you guessed it, chronic pain.

“Ma’am,” I said to someone who wasn’t there, “you could relieve the pain you’re giving me by ceasing to call me every damn day.” This time the voice hung up abruptly. Can’t imagine why.

Once, long ago, I had occasion to call Public Service of New Hampshire, probably about an overdue payment.

It was shortly before Christmas and from the other end of the line I heard, “Seasons greetings from Public Service of New Hampshire.”

“Oh, really?” I heard from what I discovered to my shocked surprise was a real live lady at the other end of the call. It was what we now call an OMG! moment.

“A lot of people say that,” she said.

Well, it just “shows to go ya” that you can’t always tell whether there is actually a person talking to you on the phone. In the words of an old TV commercial, “Is it real or is it Memorex?” Most of the time it doesn’t matter. What it is is a “chronic pain.”

“Progress was all right once,” wrote the comic poet Ogden Nash, “but it has gone on too long.” I’m inclined to agree, even while watching cable television, surfing the internet, and writing on a word processor an article I will submit by email. And I know I should stop cursing, even at robot voices. At least they’ve given me an excuse to write another story. And if I should ever meet, somewhere in eternity, Alexander Graham Bell, I will apologize for having said he should have been strangled in his crib.