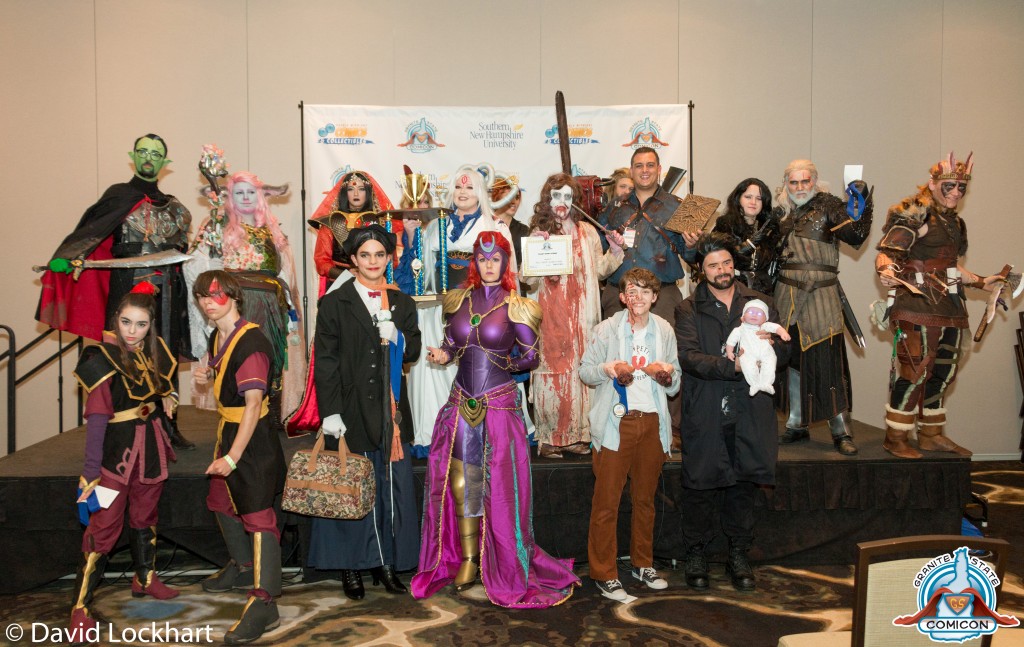 Fans showcase the costumes of their favorite comic book characters during the cosplay portion of last year’s event.

Granite State Comicon, New Hampshire’s largest comic book and pop culture convention, makes its celebrated return to downtown Manchester this month and promises to be the largest one ever.

Fans who flock to the DoubleTree Hilton on September 16–18 will be greeted by too many amazing costumed characters, comic book artists at work, special exhibits, and celebrities to count. It is the one event on the calendar where imagination runs wild for one incredible weekend.

Chris Proulx, co-owner of Double Midnight Comics in Manchester and Concord, couldn’t be more thrilled that his comic books store is celebrating its 20th anniversary in tandem with the highly successful event.

“We have kind of become the unofficial Ninja Turtles convention,” says Proulx, noting the blockbuster comic book series and films all began in Dover when artists Kevin Eastman and Peter Laird brought them to life. They premiered their creation at a Portsmouth comic book show in 1984 and the rest is history.

“A lot of Ninja Turtles artists will be in the house as well as Kevin Eastman will be returning,” Proulx says. There will also be a collection of negatives of the Turtles that has never been seen by the public before, he adds.

But as diehard Granite State Comicon fans know, everywhere they turn inside the DoubleTree Hotel they will see fellow fans donned in their favorite character costumes that range from Superman and Wonder Woman to Iron Man, Stars Wars stormtroopers and many other legendary figures that were brought to life by comic books, the silver screen, TV and video games.

As Granite Comicon has grown in popularity and reputation, their lineup of celebrities has grown as well. This year, Granite State Comicon fans will be able to meet Janet Varney, who is the voice in the animated series, “The Legend of Korra” on Nickelodeon. They can also meet Judith Hoag, who played April O’Neil in the 1990 film, “Teenage Mutant Ninja Turtles,” and WWE Hall of Fame wrestler Mick Foley, who built quite a résumé as “Cactus Jack,” “Dude Love” and “Mankind” in the ring.

They can also get up close and personal with Julian Glover, who has made a name for himself playing iconic villains in such films as “Star Wars: Episode V – The Empire Strikes Back,” “For Your Eyes Only” and “Indiana Jones and the Last Crusade.” Glover has also appeared in HBO’s “Game of Thrones” and “Doctor Who.” Doug Jones of “Hocus Pocus” fame, who played Billy the Zombie in the 1993 film with Bette Midler, Sarah Jessica Parker and Kathy Najimy, will also be on hand with two of his co-stars: Tobias Jelenik, who played Jay the bully, and Larry Bagby, who played Ernie “Ice.”

The Hocus Pocus sequel, which is due to hit theaters on the heels of Granite State Comicon, will add even more excitement to a special event where fans can join the three actors on a personalized tour of the filming locations in Salem, Massachusetts, where the original movie was shot. This eight-hour event includes a luxury tour bus, lunch with the actors at a Salem café, and autograph sessions. How cool is that?

For Peanuts fans who crave a connection to some of the beloved characters created by Charles M. Schultz, this year’s event will include Charlie Brown and Lucy, or rather the two actors who provided their voices in the 1970s.

Duncan Watson, the voice of Charlie Brown, actually lives in New Hampshire, Proulx says. “He has never done a Comicon before.” Melanie Kohn, the voice of Lucy, will also be there.

Proulx says there is something for everyone, which is one of the reasons why Granite Comicon continues to grow and attract new fans each year. 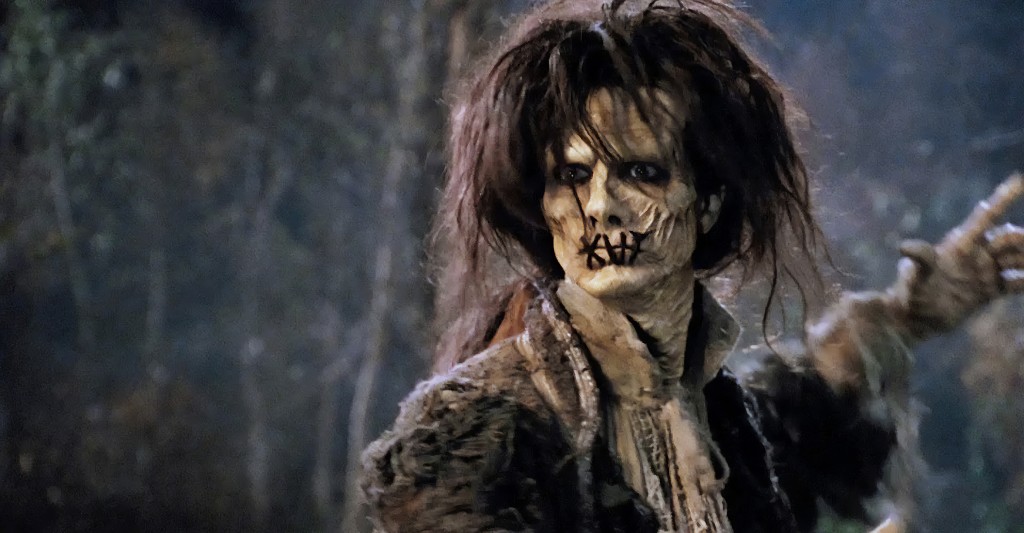 Doug Jones, who found fame as the zombie Billy Butcherson in the movie “Hocus Pocus,” will be a featured guest at this year’s Granite State Comicon, just in time for the sequel release of “Hocus Pocus 2.” Jones, an American actor, contortionist, and mime artist, has made a film career playing nonhuman creatures. Notable acting credits include roles in “Hellboy,” “Pan’s Labyrinth,” “The Shape of Water,” “Batman Returns” and “Fantastic Four: Rise of the Silver Surfer.”

One of those fans is Darren Garnick, a New Hampshire writer. He and his son Ari have attended Granite State Comicon for 15 years as super fans of pop culture.

“The thing I love about Comicon is you don’t have to buy anything. They have these awesome panels where you can see TV stars from yesteryear, and see comic book artists and watch them do their thing,” Garnick says.

“One of my favorite panels they have done for many years where they have comic book artists and they have kids ask them to draw their favorite characters doing something wacky,” Garnick says. He says someone might ask the artists to draw something like, “I want to see Wonder Woman playing racquet ball while smoking a cigarette.” The kids will then vote for the best one.

“It’s just a very kid-friendly Comicon, and I think it is because all the owners at Double Midnight Comics all have kids,” Garnick says. “I had some amazing Comicon experiences where I had to only drive 10 minutes to get to it instead of going to Boston or New York,” Garnick explains.

Unlike larger Comicon events held in San Diego and New York, Garnick says the Granite State Comicon event is much more accessible: “You don’t feel overwhelmed. It is just the right size.”

At Double Midnight Comics’ flagship store at the corner of Maple and Valley streets in Manchester, Chris enjoys taking stock of what he and his business partners, Scott Proulx, his brother, and Brett Parker, were able to achieve when they decided to open their store in 2002. The first Granite State Comicon followed in 2003.

“There hadn’t been one in Manchester for a long time. It started off with a few artists and vendors, and that was it,” Proulx says. Each year, the event grew organically and became bigger and bigger. “We hit that sweet spot of comics and pop culture hitting the main stream.”

Proulx believes his store and the Comicon event turned the corner in 2008. He says when Star Wars 501st came around, a charity group dressed like Star Wars nemesis Darth Vader and stormtroopers set up a really engaging Jabba the Hutt display. “That’s when we started to see more costumers. We started to see more diverse vendors coming in,” he recalls.

They also realized it was better to have a diversified audience by embracing all the different fandoms. As varied as the fans may be, the common thread that binds them together is their shared love and fascination with the artwork, stories and characters that captured their imagination at a very young age.

Proulx believes Comicon fans enjoy being together with others who have a shared interest. They can also indulge in their passion for comic books, video gaming and sci-fi without hesitation.

Each year, Granite State Comicon sees about 5,000 to 6,000 people. “I think we are going to have a bigger event this year because it’s post-pandemic,” Proulx says. 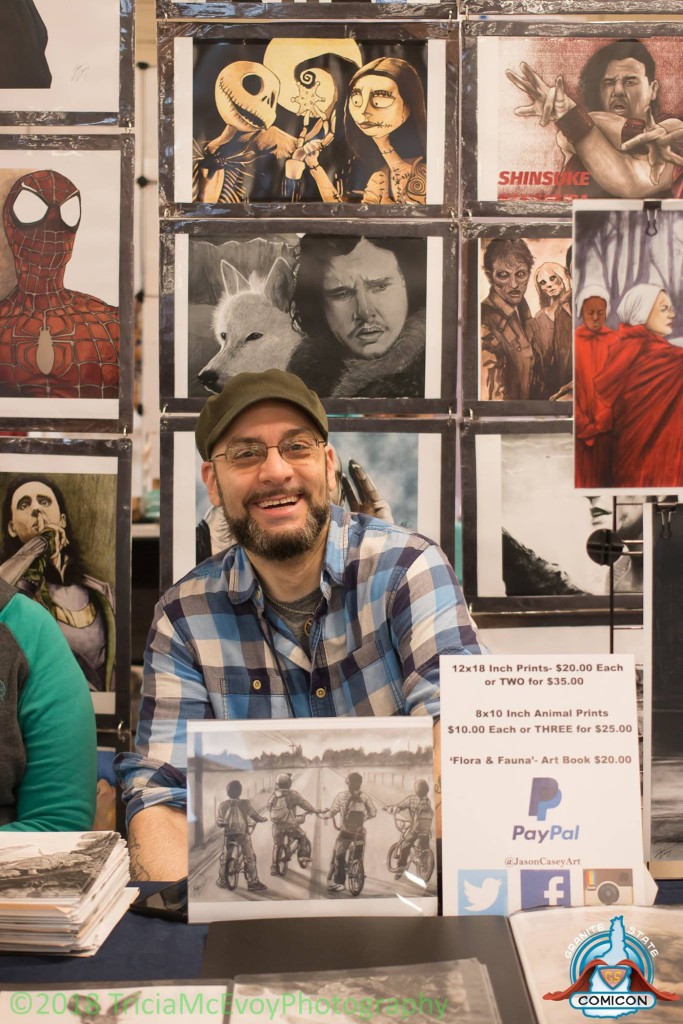 Illustrator Jason Casey displays some of his art work that was for sale at a recent Granite State Comicon event.

Granite State Comicon often envelops downtown Manchester in excitement and wonder. Proulx said a lot of costumed characters love to hang out in front of the hotel and drive down Elm Street. They are often greeted with cheers and smiles. Proulx said Double Midnight Comics also puts a premium on making the event as accessible as possible so cost is not a factor.“We try to keep it affordable and family-friendly,” he says.

Proulx says his store and Granite State Comicon are rooted in the love that for comic books that he, his brother and Brett Parker shared as kids. Proulx says he and Scott grew up in Manchester and were both into comic books. They especially liked the G.I. Joe and Transformer comic books from Marvel. Parker was into the X-Men comics.

In the 1990s, there were one-day comic book shows with hardcore collectors either at the Bedford Mall or in Concord, Proulx recalls. Like many other comic book enthusiasts, Proulx says they did not openly talk about their love affair with comic books that much. “It really wasn’t that much in the mainstream,” he says.

Proulx says they would frequent a comic book store then called Storyteller Comics. “It was clean, well organized and well lit.”

After the owner sold the store and it later closed, Proulx says they saw an opportunity. The three business partners opened Double Midnight Comics in 2002, offering an array of comic books, games and other items.

“We never really thought like we’re going to do this forever,” Proulx says. “We ended up making it our jobs, and that’s awesome.

“The vision we had was to have a fun, well-stocked comic books and game store that had to be available for everybody,” Proulx says. “I can’t imagine doing anything else.”

Through the years, Proulx says their customers have ranged from the very young who are just discovering their love for comic books to older fans.

Looking ahead, Proulx is confident that Granite State Comicon will continue to grow in scope and popularity as it continues to attract people from all over the country. The City of Manchester is receptive to helping Double Midnight Comics accommodate that growth.“We bring in a lot of people for the event and the hotels are booked solid,” Proulx says.

Ultimately, Proulx says they want to keep the event in Manchester and either hold it at multiple venues or perhaps create a festival. One thing’s for sure: Granite State Comicon is here to stay.