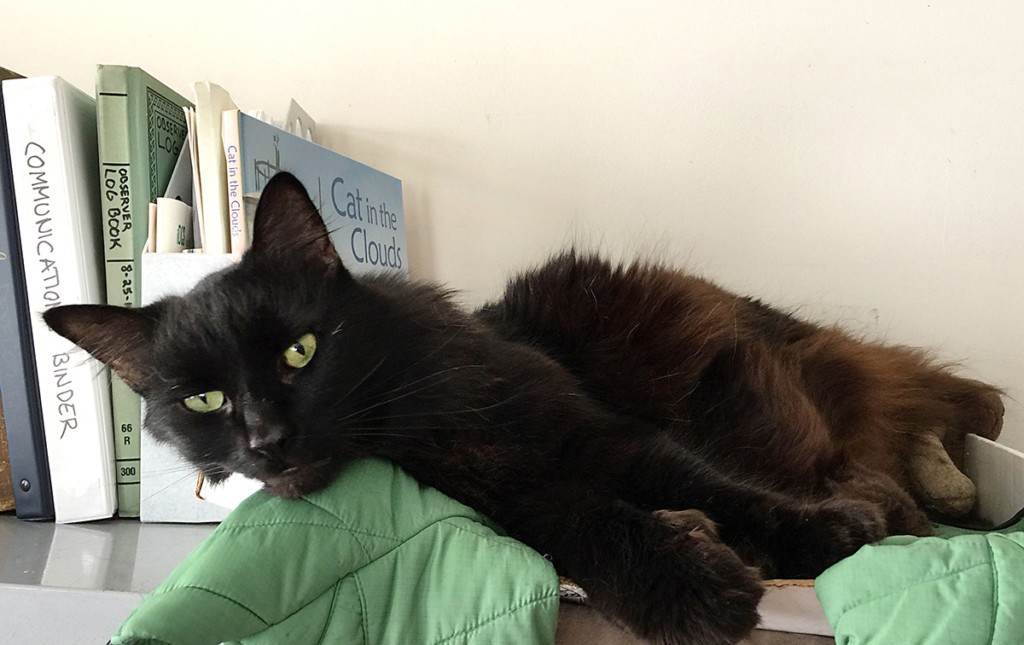 Over the weekend, I joked with my husband that we should bring our cat Pesky to meet Marty, the feline mascot of the Mount Washington Observatory (I maintain Pesky and Marty are long-lost siblings, as they’re the same age and look nearly identical). My husband was talking through logistics for a winter hike up the Northeast’s tallest peak, and I proposed that he put Pesky in his pack so she could finally get to know her “brother.” Since he didn’t want to hear her outraged howling for hours on end, I volunteered to ride up with her in the Snowcat and meet him at the top. I’m ashamed to say, as a 13-year employee of New Hampshire Magazine, that I’ve never ascended Mt. Washington by any means, motorized or otherwise, and it was long a goal of mine to somehow spend the night and snuggle with Marty. Probably the part about bringing Pesky, who detests the car and/or outdoors with her entire tiny being, was not a realistic part of that plan.

Sadly, though I promise to one day climb (or, more likely, drive) to the top, Marty will not be there to greet me. I waited too long. The observatory just announced that after an unexpected illness, Marty passed away. Like many, I’m fascinated by Mt. Washington’s wild weather and the people who study it, and Marty was a beloved part of that world. It makes me smile to think of Marty sprawled on someone’s keyboard, getting (adorably) in the way of important scientific research.

When we were planning our special Mt. Washington issue (June 2019), everyone knew Marty had to be included. Dan Szczesny, Mt. Washington expert and author of “The White Mountain,” agreed. Dan joined us for a time that spring and summer, helping us shape and write the sprawling feature.

“Of all the amazing people, records, history and weather that can be found on New Hampshire’s Mt. Washington, there is one creature that tops the list. Seldom does a book reading or presentation go by that I’m not asked about the summit’s only full-time resident,” Dan wrote in the section on Marty.

“On January 8, 2008, New Hampshire held two elections,” Dan continued. “The first was the presidential primary. The second, in which more than 8,000 New Hampshire residents voted, decided the fate of arguably the most important nonhuman in the Granite State. That nonhuman is Marty, the Mount Washington Observatory’s current mascot cat. The black, longhaired Maine coon beat out opponents Wilson and Sarah in a three-way race to decide which kitty would replace the recently retired mascot Nin. Marty won in a runaway.”

Marty captured the hearts of the observatory staff too.

“It is with an incredibly heavy heart that we have to share the news of Marty’s passing due to an unforeseen illness,” said Summit Operations Manager Rebecca Scholand in a press release announcing Marty’s passing. “As a past observer who lived on the summit for four years I can tell you Marty was a special companion, entertainer and so incredibly loved by observers and state park staff and will be sadly missed.”

Due to Marty’s previously scheduled retirement in early 2021, plans to find his successor are already underway. It’s comforting to know that Marty’s spirit will live on as the tradition of observatory cats continues.

Pets to the Rescue

My Quest To Save A Cow

The Healing Horses of Equine Therapy