Get Off the Beaten Path in Ossipee

Next door to the famous Winnipesaukee is the lesser-known Ossipee Lake. It’s time you checked it out. 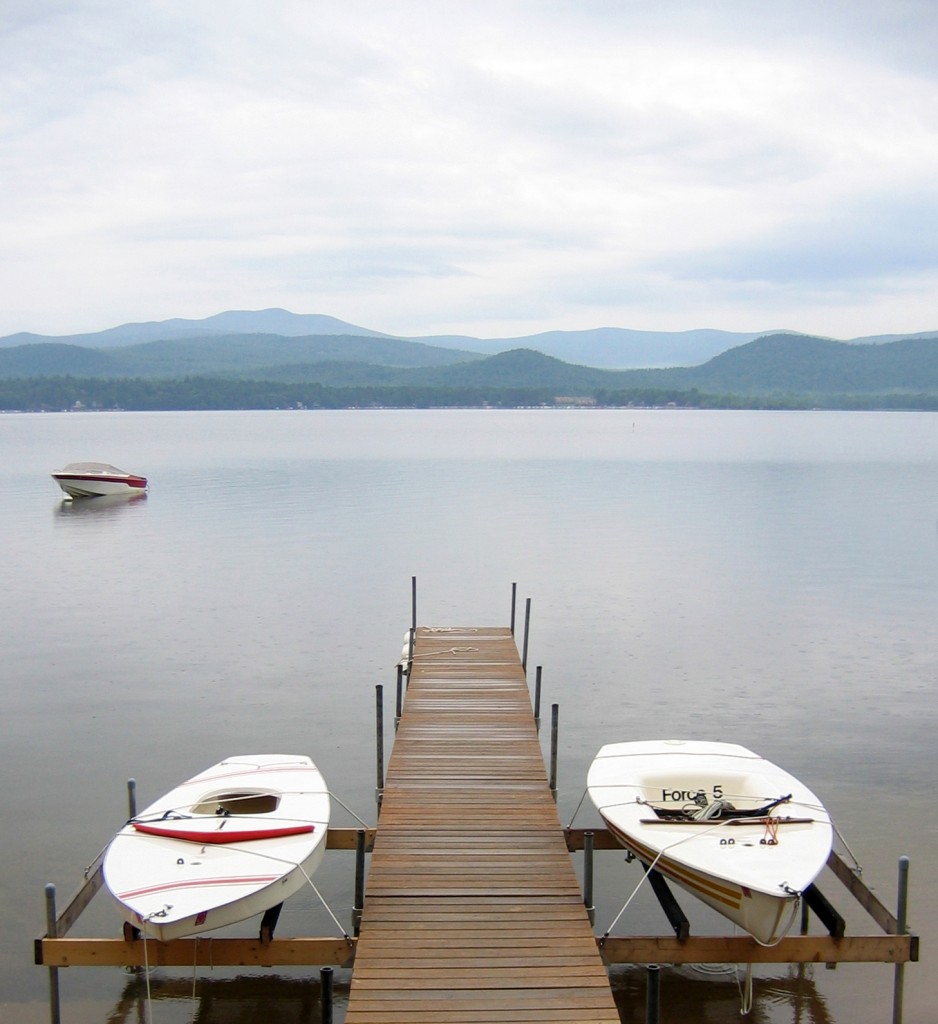 On the New Hampshire road map, routes 16, 25 and 171 draw a lopsided circle around a huge empty space. It’s not quite empty, as a few roads — some of them unpaved — penetrate the undeveloped mass of the Ossipee Mountains. But none goes through, leaving the largest and least disturbed wildlife habitat in the region.

With the slightest excuse, I will always begin with the geology, and in the case of Ossipee, it largely defines the town. The poster child of ring dikes, the Ossipee Mountains are famous among geologists as one of the best examples of this volcanic phenomenon. Geologist Stanley Williams described it as “one of the few places in the world that offers access to the guts of a volcano,” and it’s one of very few examples with the outer ring almost entirely intact.

Briefly put, it’s what’s left of the cone of a 10,000-foot volcano that first erupted 100 million years ago. Viewed from the air, it’s an almost perfect circle, with Dan Hole Pond just inside its southeast rim. You can get a good view of the circle of mountains from the summit of Bayle Mountain, roughly in the center. The trail begins on Marble Road, shortly past Connor Pond, and crosses through a boulder field of glacial erratics dropped at the end of the ice age, a later chapter in the region’s geologic story.

Although the hills in the south-east corner of Ossipee were more hospitable to farming, settlers began to move into the rougher terrain of the Ossipee Mountains, forming little crossroads settlements.

Former Carroll County Sheriff James Welch (1877-1959) in his book of reminiscences, “High Sheriff,” speaks of the mountain families who lived in this remote area, and of seeing their deserted houses alongside the roads in the 1950s. He speaks, too, of mill sites along the Lovell River, which flows out of Connor Pond (“one of the handsomest little lakes in NH,” he adds), where farmers took their grain to be ground.

In our wandering around Ossipee’s backroads, we found one of these mill sites on the Dan Hole River, a little brook that flows from Dan Hole Pond — another lovely lake backed by the Ossipee Mountains. Where Thurley Road crosses the brook, the remains of a mill’s stone foundations line both sides.

We were looking for some of these old settlements. Dorrs Corner and Moultonville are both still active little communities; in Chickville, just outside the ring of mountains, we found only a small 1838 church and a large cemetery.

We followed Granite Road into the easternmost corner of town in search of Leighton Corners, where a tiny meetinghouse built before 1812 is marked by a National Register plaque. Original settler John Leighton’s house is beside the road, next to the white farmhouse of Maplehurst Farm.

Near Granite Road is Duncan Lake, where President Grover Cleveland summered. The cottage is still there, a few yards from Route 16, and the town beach is named for the president, whose fishing boat is a prized exhibit at the Grant Hall Museum of Ossipee History. Cleveland’s son Francis, who continued summering at the lake, is remembered as the founder of The Barnstormers’ summer playhouse in Tamworth. 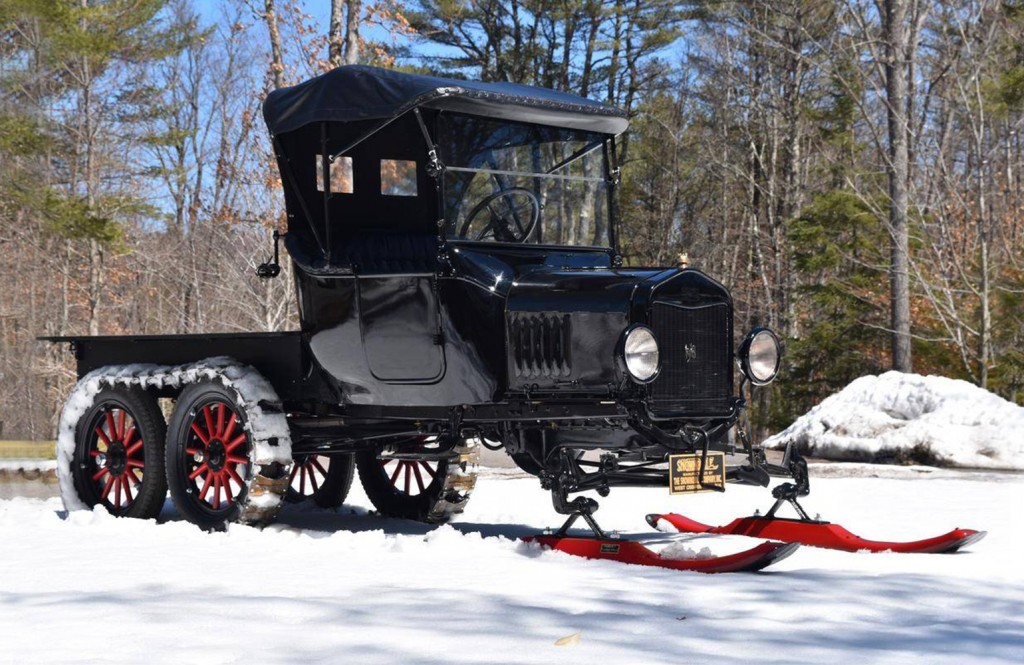 Of these scattered settlements, three of them thrived and grew into Ossipee, Center Ossipee and West Ossipee, spaced along Route 16 and the parallel railroad line that opened the region to tourism in 1871.

Ossipee became the county seat, and the small brick courthouse in its center was built in 1916, a good example of Colonial Revival architecture. It housed the superior court until 2004, when the new building opened on Route 171. On the opposite side of the street is the stately white Second Congregational Church.

Center Ossipee sits squarely on the rail line, which crosses its main street; the old rail depot is now Mountainview Station restaurant, and across the street an impressive wooden grain depot stands beside the tracks.

Just around the corner, we found a newer addition, Sap House Meadery, where we sampled a flight of three honey wines. In the 10 years the meadery has operated, owners Ash Fischbein and Matt Trahan, who were named New Hampshire’s Young Entrepreneurs of the Year in 2014, have created a repertoire of more than a dozen meads based on local honey and locally grown berries and fruits. We were especially interested to learn of their meads made with foraged ingredients, such as sumac, elderberry and spruce tips; after tasting the latter, we left with a bottle.

Before the railroad came through, the nucleus of Center Ossipee was about 500 yards east, where we found the Grant Hall Museum of Ossipee History, in the former Grant’s Store, moved here from elsewhere in town to serve as a museum.

At the northernmost edge of town is West Ossipee, a busy crossroads of routes 16, 25 and 41. The steep mountainside above it was once the Mt. Whittier ski area and, until it closed in 1985, its gondola cars rose on cables suspended over Route 16. The base terminal building now houses Tramway Artisans, a gift shop.

The intersection is a landmark for our family, as it’s conveniently located between home and our favorite ski mountains; the children have never let us pass without stopping for lunch at Yankee Smokehouse. If the sign with its cheery pink pigs doesn’t get attention, the mouthwatering fragrance emitting from the barbecue in the yard will. 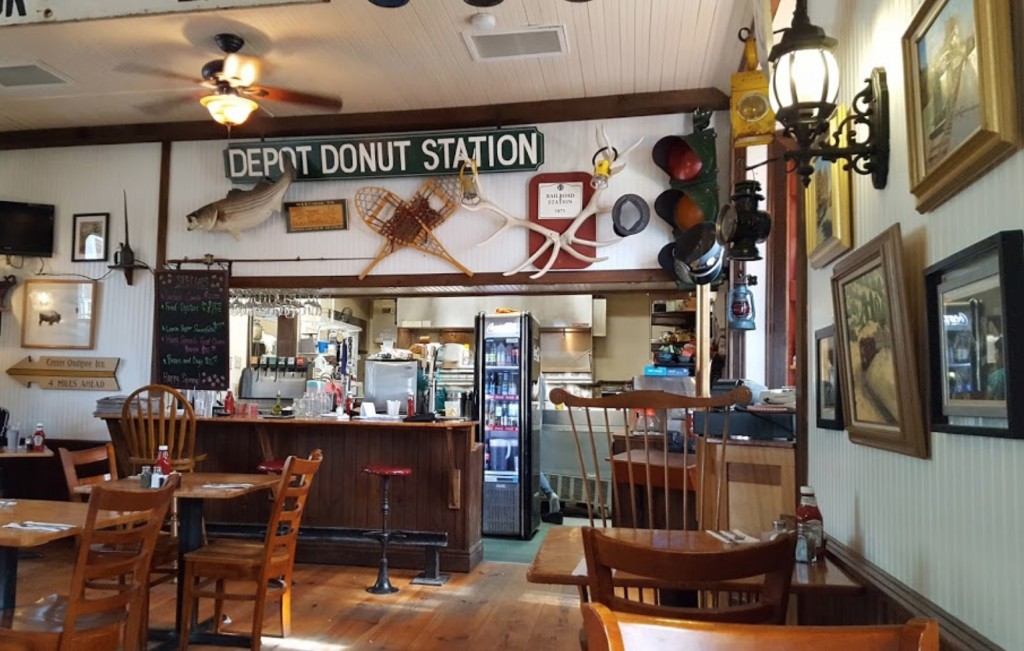 The Whittier Bridge, built in 1870 to carry the old Route 25 across the Bearcamp River, is a rare example of a Paddleford truss. It no longer carries traffic, or even crosses the river; it stands forlorn on dry land off Nudd Road, hauled off its abutments for repair in 2008 and still there. It’s not fenced and no signs warn visitors off, so of course we ventured under it for the rare opportunity to see how these bridges are constructed.

West Ossipee holds a place in White Mountain — and winter sports — history as the birthplace of the snowmobile. White’s Garage was a landmark at the intersection; its owner, Virgil White, invented a conversion system in 1913 to allow a Ford Model T to be driven on snow. His principle was simple: He put wooden runners on the front and a double set of wheels with tractor treads in the back.

He patented the name “Snowmobile,” selling the conversion kits — about 25,000 of them. These vehicles were not for recreation: In a day before roads were plowed, they allowed winter travel at a faster pace than a sleigh, especially important for doctors, mail carriers and others who needed to travel in all conditions. White sold the snowmobiles for $750 and conversion kits for $400; in 2011 an original White 1923 model was sold by Sotheby for $27,000.

Manchester’s Taco Tour is Back