The real Hanukkah miracle? That there aren’t more clogged arteries 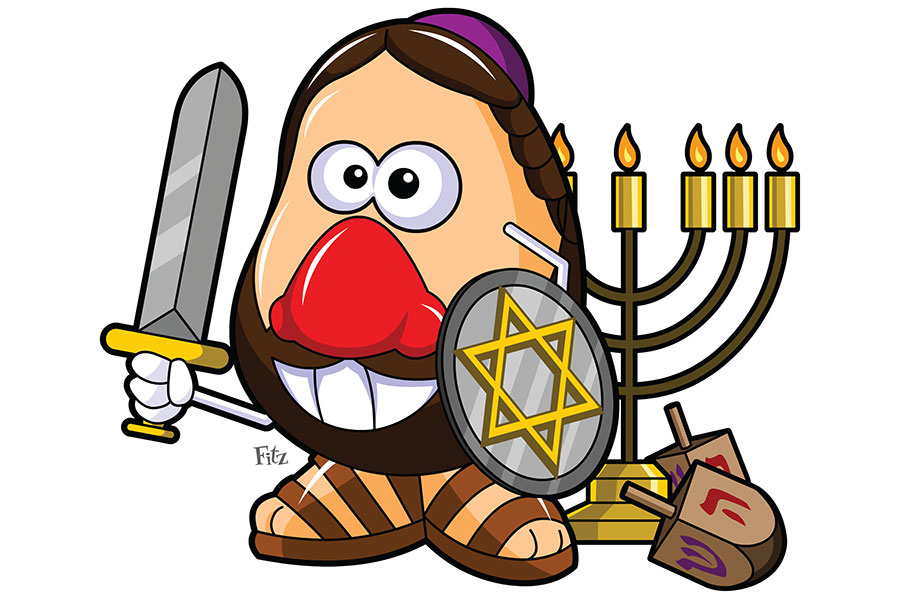 Of all the tricks that God has performed for the Jewish people over the years — the Burning Bush, the Parting of the Red Sea, the Birth of Modern Israel — I am least impressed with the miracle of the Hanukkah oil.

If you’re not familiar with the story, here’s what is not covered in the Adam Sandler song. The Greek Seleucid Empire, spanning across Egypt, Syria and Palestine, was led by Antiochus IV — who was a real jerk compared to Antiochus III.

The Greeks banned Judaism and pulled a Godfather in Jerusalem, defiling the Holy Temple with severed pig heads and turning it into an altar to Zeus.

Led by the charismatic Judah “The Hammer” Maccabee (who now has a beer named after him in Israel), the Jews fought back and pulled off a stunning military victory. The Jerusalem Temple was rededicated to God with a ceremonial oil lamp that was low on fuel. Instead of lasting one day, the lamp remained lit for eight days.

Woo hoo! Talk about anti-climactic. I once had a flashlight that lasted months on the same pair of AAA batteries.

Although I hardly consider the oily story divine intervention, I’m extremely grateful it exists. Judaism is the only religion I am aware of that makes eating fried foods mandatory. It’s a shaky symbolic connection at best — oil lamps, greasy treats — but thank God for the yummy potato latke. These fried potato pancakes, usually saturated with chopped onions, taste better than French fries, onion rings and any other artery-clogging appetizer combined. And as a bonus, each bite is a courageous stand for tolerance, diversity and multiculturalism.

My relationship with potato latkes really hasn’t changed since I was a three-year-old. No matter if it were my Grandma Bea, my mom or wife Stacy with the spatula, I’d hover over the pan and intercept them before they could make it to the paper towel draining station. The risk of burning the skin on the roof of my mouth is worth it.

My family attacks a platter of latkes with more speed than the seagulls diving for scraps at Hampton Beach.

Becky and Alan Green, a husband-and-wife obstetrician team who deliver babies at Nashua’s Southern New Hampshire Medical Center, also bring potato pancakes into the world. At their annual Hanukkah party, they whip through 25 pounds of regular spuds, 10 pounds of sweet potatoes and 10 pounds of onions.

“God forbid, should we run out. We always make more than we need,” says Alan. “And for the next two weeks, our coats smell like latkes.”

And why not? The only thing that’s necessary to celebrate is the worship of cooking oil. A great place to commemorate Hanukkah would be Nashua’s new Five Guys burger-and-fries joint, where they stack up 50-pound potato sacks in the dining room like sandbags on a dike. Heck, no reason why the Festival of Fried Food also couldn’t be observed during each summer’s Hopkinton State Fair.

Along with that beverage named after him, Judah Maccabee might get the munchies for funnel cakes, battered pickles and deep-fried Snickers. All in the name of religious freedom.

Using grating blade of food processor, grate as many potatoes as it will hold. Then salt, drain in colander, and SQUEEZE OUT water from potatoes in colander.

Then, add grated potatoes in processor bowl with steel blade. Mix in:

Process with maybe 6 pulses until the texture is consistent but not too fine.

Fry patties on a medium hot burner in about ¾” of oil. Shape them with your hands or a slotted spoon.

Add more matzah meal if they don’t stick together.

Fry until just a pink center remains, then flip.

Periodically remove the burnt bits with a slotted spoon.

Place on paper towels in aluminum pans, about 3 layers deep.

Chill on the porch until party time, then bring inside and change paper towels before reheating, do it with the towels at 400 degrees (any less and they will really be soggy).

Letters to the Editor

Letters to the Editor