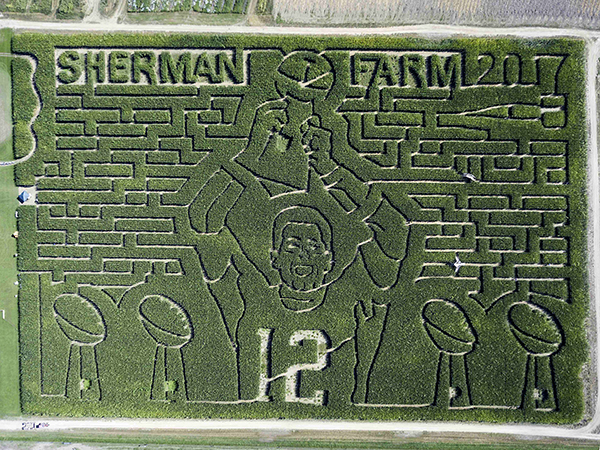 Corn mazes can have all kinds of themes, like the 2017 Super Bowl champion New England Patriots at Sherman Farm in East Conway. Photo courtesy of Jill Beck, Pawtography

Then there are corn mazes.

Across the state, portions of farms and orchards are turned into intricate labyrinths of fun where the corn is as high as an elephant’s eye. The amazingly designed mazes are created in acres of cornfields that are cut into winding dirt pathways, which can resemble everything from native wildlife to sports heroes. It takes weeks for them to take shape before opening to the public. They are agricultural accouterments to the traditional farmstand, along with sideshows such as farm animal petting, cider donuts, games, corn cannons, night mazes, hayrides and more.

They’ve turned into a fall tradition for both the families who enjoy them and the family farms making them, often opening in summer or around Labor Day and going until the end of October.

“Agritainment is an industry all its own now, bringing people to the farm for an experience and to make memories,” says Michele Dutton, a self-described farm girl, of Sherman Farm in East Conway in the Mount Washington Valley, where a corn maze has been part of the operation since 2007.

“Each year we are learning and growing, changing and adding,” she continues, “but it’s really about bringing people back year after year and changing just enough so there’s something new, but also keeping it familiar and fun.”

As big New England sports fans, the folks at Sherman Farm have chosen scenes of the Bruins winning the Stanley Cup, the University of New Hampshire vs. University of Maine hockey rivalry, and the 2017 Super Bowl champion Patriots.

“It’s a family decision,” says Dutton. “Sometimes we know what we will do a season in advance; sometimes we are scrambling to come up with something. But we always decide together and welcome input from family, friends and customers.”

“Our maze is more than just a maze,” says Dutton. “There are games to play while you navigate, things to do in our courtyard area, great food to eat, and memories to be made.”

They plant the corn, but Sherman Farm partners with a Utah-based company called The Maize, which provides services from planning to cutting to advertising to moral support.

“It’s a trade secret as to how it is done,” says Dutton. “We aren’t even really sure what happens. It just grows and we have a maze.”

Crazy mazes like these can be found all over the state.

At Beech Hill Farm in Hopkinton, the Kimball family opens three mazes annually. At Coppal House Farm in Lee, which is doing a maze for the 14th time, it’s even possible to rent the maze for corporate events such as team building and birthday parties. The corn maze at Scamman Farm in Stratham is also available for rent, each year with a changing theme and game inside. 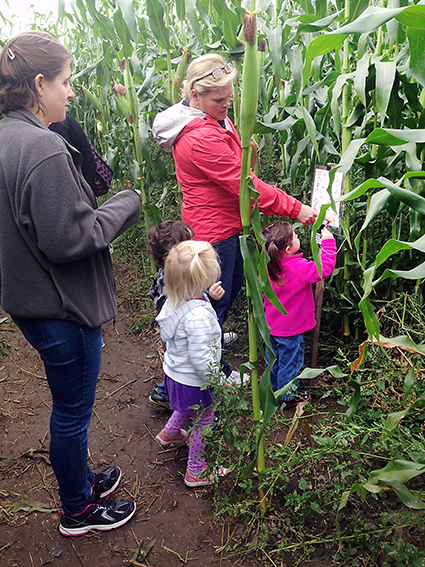 The stalks can reach up to 15 feet high at the corn maze at Moulton Farm in Meredith, where they tend to start planting in mid-June, a six-hour process. The Riverview Farm corn maze in Plainfield is known for its puns and illustrations, proving that many of these mazes are also grid works of art — especially when seen from the air.

They are hand- and tractor-crafted, and often have incredible roots.

At Beans & Greens Farm in Gilford, the maze started as a math homework assignment for the owners’ youngest son. Owner Andy Howe says his son created a massive grid outline for a maze after hearing that numerous farms were getting in on the trend.

That was many years ago, and now the family-run farm is opening its 17th maze this fall.

Over the years, it’s grown in size and experience, says Howe. There have been specific design elements to increase difficulty and haunted adventures on certain nights.

“Our maze has always been designed with difficulty in mind, in keeping with a classic labyrinth,” says Howe. “We don’t design our maze to look pretty from an airplane as our customers experience the maze on the ground, so it is designed specifically for the experience of the customer in the maze. An example — our bridge elements increase both difficulty and our customer’s maze experience.”

It’s also a labor of love to make it.

“Without revealing too much about our process, it takes significant effort in three stages — planting, trail design and final maze details,” says Howe. “The planting is fairly easy and done on a tractor. However, the trail design and finishing stages take a small army about a week each to complete.”

The mazes are also part of the farm-to-table movement. Exploring the mazes, which also double as locations for field trips, can work up an appetite. Location is everything, and patrons are just steps from fresh produce, baked goods, deli meats and more.

When the mazes have run their course, the corn can be cut and used as feed for the farm animals.

Of course, getting through those mazes can be a bit confusing.

Dutton suggests you simply enjoy the experience and pay attention to the little ones.

“Don’t overthink it and just have fun,” she says. “Play the games, listen to your kids.”

At Beans & Greens, it’s also about staying in motion.

“We always tell guests the best hint we can provide is simple — keep moving,” says Howe. “Don’t step to decide which way to go, to figure out which way is north, where the sun is or anything else. Just keep moving!”

That way you won’t get cornered.