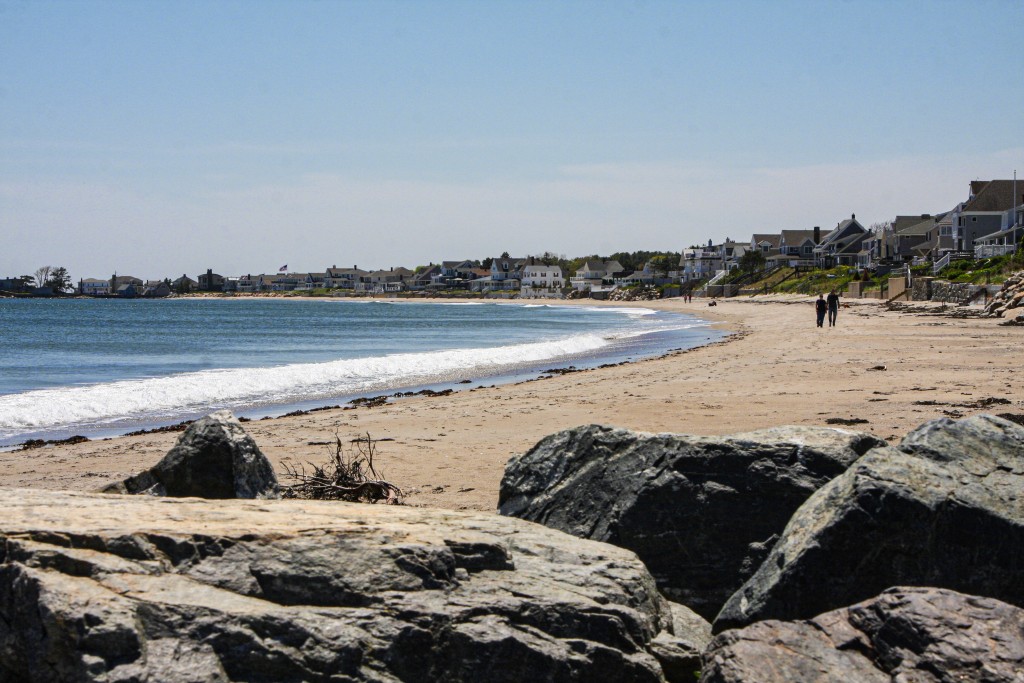 Rye makes the most of its half of New Hampshire’s famously short coastline with a string of sandy beaches. They begin at its border with North Hampton, where the long crescent of Bass Beach is followed by the wide sands and high surf of Jenness State Beach.

Farther north, beyond Rye Harbor, is Wallis Sands, protected by stone jetties and with views of Star Island (which is also part of Rye). At the rock-bound northern end of town, Odiorne Point State Park has walking trails along the shore but no beaches.

Although it’s the long stretches of wave-washed sand that bring Rye the most attention — on a summer weekend you need to reserve a spot early in the 500-car parking lot at Wallis Sands — the town is a lot more than beaches. But both its past and present are closely tied to the sea.

While exploring the coast in 1524, Giovanni da Verrazzano anchored off Odiorne Point. In 1605, Champlain sailed into the harbor; in 1614, John Smith (of Pocahontas fame) recorded sailing past. It was a veritable social register of early explorers.

The first actual settlement was in 1623, only three years after the Pilgrims landed at Plymouth. These first settlers, led by David Thompson, came to establish a base for fishing off the Isles of Shoals; their Pannaway Plantation was the first European settlement in what was to become New Hampshire. By 1630, they had all relocated to Strawbery Banke, now Portsmouth.

In 1660, John Odiorne bought land for a farm, which his descendants continued to hold until 1942, a total of 282 years. The third farmhouse built by this family in 1800 still stands on the west side of Route 1A, and behind it is a cemetery with Odiorne family tombstones dating from the early 1800s. By the mid-1880s, wealthy families had begun to build summer “cottages” at Odiorne Point, one of which became the elegant Sagamore House, a hotel that attracted such notable figures as Cornelius Vanderbilt.

Rye’s summer colony wasn’t just at Odiorne Point. At the other end of town, the imposing mansions that still line the inland side of Ocean Boulevard are not as numerous as those at Little Boar’s Head just to the south but just as impressive.

Almost hidden behind a pair of these is St. Andrews-by-the-Sea, one of the 10 seasonal chapels maintained by the Episcopal Church of New Hampshire. Completed in 1877, the stone church is one of two of these seasonal chapels that are listed on the National Register of Historic Places (the other is Emmanuel Church in Dublin).

The stained-glass windows were designed by John La Farge and the Tiffany studios. Alongside Church Road, in front of the church, is a traditional English lychgate, and the stone wall bordering the churchyard has a granite mounting block to assist ladies alighting from a carriage.

The Seacoast Science Center at Odiorne Point State Park is one of this year’s Best of NH Editor’s Picks.

World War I and the Great Depression changed the social dynamic of the summer set, but it was World War II that left the most indelible marks on the summer estates. Their idyllic life at Odiorne Point ended abruptly in 1942, when the land was taken over by the U.S. Army to become Fort Dearborn. In December of 1941, the first battery of four guns was installed there to protect Portsmouth Harbor and the Naval Shipyard. The location provided a clear view and direct aim at any ship close enough to fire on the shipyard.

By January of 1942, all the properties were vacated and all but one torn down to make room for the gun emplacements. Route 1A was closed to traffic and barbed wire was strung along a “dead line” to prevent access from the marsh creeks. The casemates that enclosed the 16-inch M1 guns were covered with earth and planted with quick-growing vines for camouflage. You can see the mounds today at Odiorne Point State Park, some with full-grown trees on top.

Farther south along the coast, another relic of World War II remains, this one an observation tower built in 1943. One of 14 in a series of military defenses around Portsmouth, Pulpit Rock Tower is the only one to survive. The 73-foot-high concrete structure has walls a foot thick and an observation platform at the top. A path leads to it from Neptune Drive, and it is occasionally open to visit; it is on the National Register of Historic Places.

Until the early 20th century, Rye Harbor was the province of fishermen and harvesters of English moss. But increasing numbers of summer visitors presented other opportunities, and today Rye Harbor is the starting point for whale-watching cruises with Granite State Whale Watch and several fishing charter operators headquartered in a row of colorful fishing shacks. Watch the boats come and go between the breakwaters from a bench or picnic table at Rye Harbor State Park.

The sea that has been so instrumental in shaping life in Rye gets its tribute at the Seacoast Science Center in Odiorne Point State Park. Dedicated to educating children and adults about the value — and vulnerability — of oceans and marine life, the center is more than touch tanks where kids can hold a starfish and pat a sea urchin. The tanks are staffed by naturalists who can show interesting characteristics such as the green eyes of a cat shark, surprise visitors with a spouting scallop, or carefully retrieve a perfect baby lobster barely three inches long.

Although the primary emphasis is on sealife in the Gulf of Maine just outside the windows, there’s an eye-grabbing display of colorful tropical fish and anemone to point up the vulnerability of coral reefs.

Opened in June of this year is an entirely new exhibit hall called “Our Dynamic Gulf of Maine,” which is filled with interactive exhibits and teaching stations. These include “Captured in Currents,” about tropical animals that ride north on the Gulf Stream and “Coastal Invaders,” on green crabs and other invasive species. “The Lobster Trap” is all about lobsters, and “Stories of Urgency and Hope” is a video station with stories of challenges and solutions related to warming and rising seas. The center was awarded a Best of New Hampshire Editor’s Pick in 2022.

Inside the modern science center building is the only remaining summer home to survive the conversion to Fort Dearborn, the stone Sugden House. Like the other confiscated properties at Odiorne Point, the house was not returned to its owners after the war but to the state of New Hampshire.