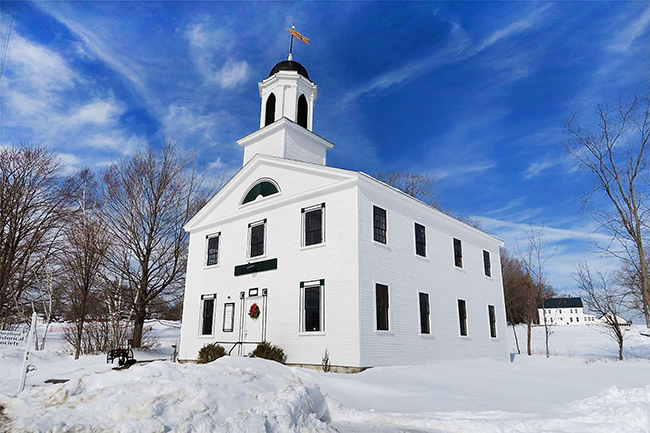 Austin Hall, originally a school, was built in 1833. Courtesy photo

We grew up not far from Strafford, and swam at friends’ camps on Bow Lake every summer. But I had never climbed Parker Mountain. Had I known as a rock-collecting kid that there was an abandoned mica mine on the mountain, I certainly would have badgered my parents into taking me hiking there.

Better late than never. I no longer fill my pack with mineral samples, but old mines are still fascinating. We found this one easily by following the Spencer Smith Trail from Route 126. The mine, a cave carved into a rock face, opened in the 1880s and was mined until the late 1950s. Its prime commercial products were feldspar and mica, an unusual silicate formation that has what geologists call “perfect basal cleavage” — a technical way of saying it separates into thin sheets. These are transparent and will withstand high temperatures, so they were used to make windows on woodstoves. Mica’s main use today is in cosmetics, where it adds shimmer — the “glowing look” — to mineral makeup. Although the little Parker Mountain Mine is no longer commercially productive, it’s still of interest to rock hounds for the more than a dozen mineral types that have been found on the grounds.

The Spencer Smith Trail continues up to the summit of Parker Mountain, marked by a tall rock cairn. Trees near the summit obscure part of the view, so it’s not a full 360 degrees, but we continued on to another overlook where we had a bird’s-eye view of Bow Lake.

It wasn’t always a lake. When the early settlers came, it was a little pond with a brook flowing out of it, which they called respectively Bow Pond and Bow Pond Stream. Drawn to this area for its stands of virgin timber, settlers built the first sawmill at the outlet in the mid-1760s, harnessing the flow of the stream for power. By the end of the century, several water-powered mills operated at the outlet, gradually enlarging the pond into a lake. These were shared mills, which their builders used in turn for a few days at a time.

In 1823, the Dover Manufacturing Company, which had bought the lower mill, built a dam on Bow Pond. Years later, in 1832, the dam broke, destroying all the mills along the stream, along with several other buildings in the settlement of Bow Lake Village. The dam that replaced it further enlarged the lake to its present nearly 3-mile length. Bow Pond Stream became known as the Isinglass River, a favorite trout-fishing stream for my father. Isinglass is another name for mica.

The Lakeside Players at the Bow Lake Grange Hall
bowlakecc.org

A steam mill opened in Bow Village in 1829, and its building later became the Grange Hall. Today it’s the home of The Lakeside Players (“the best little theater by a dam site”), whose productions help pay for the maintenance of the Grange Hall. Along with their shows, which range from cabaret to drama to musicals, they produce dinner theater events and occasional afternoon teas with entertainment.

That’s quite an undertaking for a small community to support (Strafford’s total population was just under 4,000 in the last census), but Strafford is an unusually arts-supportive community. It was the annual townwide craft show that took us there in December.

This year, Christmas in Strafford celebrates its 30th year on Saturday and Sunday, December 7 and 8, with three group venues and 17 open studios and homes, some of those with multiple artists exhibiting. In all, more than 50 craftspeople show and sell their work, which includes media from wood and metal to wool and paper. The Grange Hall in Bow Lake Village, the Bow Lake Church and the historic Waldron Store are set up as mini craft shows. Large signs with cardinals identify the individual studios and homes, which are easy to find with a downloadable map. Maps are also at the Strafford Town Hall, the library and Isinglass Country Store.

Many of the craftsmen are juried members of the League of New Hampshire Craftsmen, including Rick Gagne, whose heirloom jewelry boxes we had admired in league shops. At his studio are beautiful cherry burl boxes, along with smaller items and wooden jewelry. Here too are beautiful hand-turned pens by Wolfgang Liskow. At Indigo Moon Farm we could meet the alpacas that provide the black, brown and white wool for feather-light hats, scarves and mittens. There are also hand-turned drop spindles for spinning the fleece, as well as pepper mills and bowls turned from exotic woods.

Timberdoodle Farm on First Crown Point Road reminded us of Strafford’s beginnings. It’s a sawmill and, along with selling kiln-dried slabs and project lumber, they sell finished and unfinished cutting boards. At the Grange Hall — the one that used to be a mill — Barry Nation’s photography and photo puzzles reflect the lake outside. His aerial shot of Bow Lake gives an even better view of its distinctive shape than the one we saw from Parker Mountain.