Did You Know the Old Man of the Mountain Had a Little Brother?

He's seen better days, but here's where you can find him 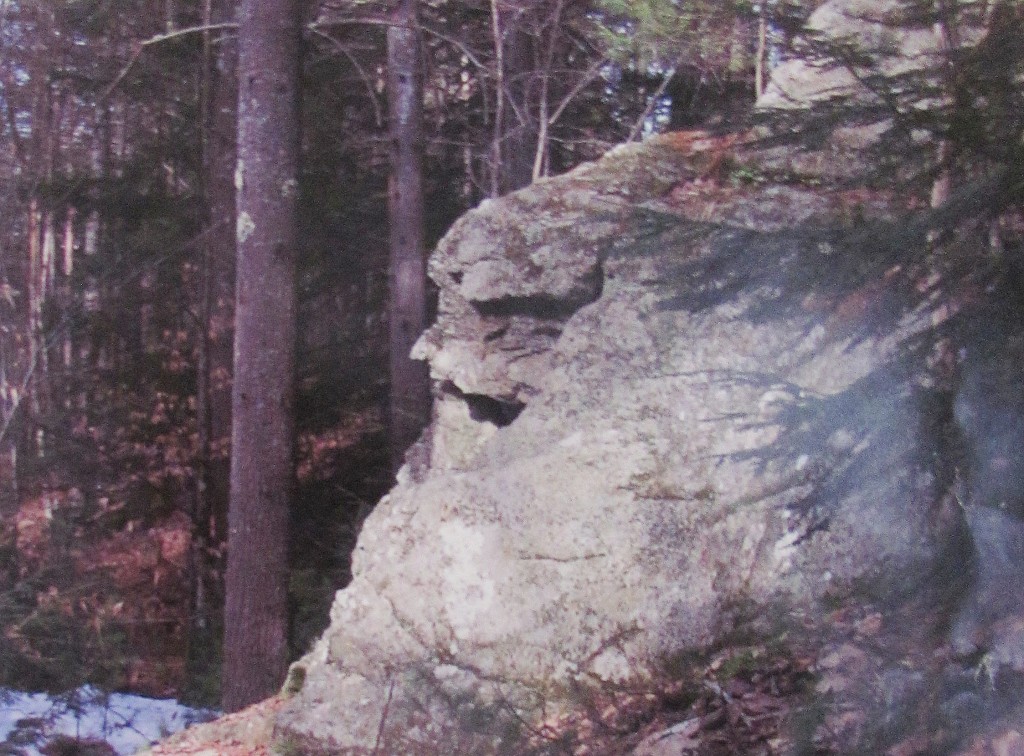 The Little Man of the Mountain. Photo by David Noble

Deep in the heart of a Milton Mills forest sits a relatively large but relatively unassuming boulder. At first glance, it appears to be one of the many single nondescript geological vestiges of a time when the Ice Age rolled its glaciers over New England. A closer look reveals much more — the profile of New Hampshire’s Little Man of the Mountain.

Decades ago, a rumor about its existence and location teased me into finding the landmark in this small village located in the northern part of Milton. “Drive about 5/10 of a mile down a road off Route 125 toward Milton Mills” were the vague directions I received. At that time, the Spaulding Turnpike did not exist, and that alleged “easily found” country road was not easily found. However, it was flanked by forest, not thickets. Agreeably visible and discernible from the shoulder of the road, a massive stone stood alone. It sported a smaller version of our illustrious state icon, the Old Man of the Mountain (may he rest in peace). This recognizable pareidolia was a clear comparison to the one etched by Mother Nature on Cannon Mountain.

During a recent visit with my grandson and his fiancé at their newly purchased farm in Milton Mills, I was inspired to once again see the Little Man and learn more of his story. Not so easy this time.

The woodlands had changed considerably with the addition of the highway, which altered the original way into the town. The former directions needed tweaking, and attempting to get new directions was difficult. Locals were unfamiliar or vague with the profile itself or its exact location, but the Milton town clerk’s office said that “Sunny Jim,” a moniker applied to the Little Man, had graced the cover of the 2014 annual town report. A brief testimony under his picture succinctly noted: “Meet Sunny Jim of Milton, Old Man’s Little Brother just as famous to us natives as his Father was in Franconia.” The inscription on the inside cover included directions to Branch Hill Road, still a turn from the old Route 125, to a road heading into the Mills. The cryptic dedication gave credit to William Laskey and Raymond Huse. Evidently, these men not only found the profile, they bestowed the sobriquet of Sunny (sometimes Sonny) Jim.

After several attempts asking around to see if anyone knew them, I headed for the Milton Mills library and learned that both men died over 100 years ago. No interviews there! Librarian Betsy Baker pointed me to a history of the town compiled by Harold Franklin Roberts in 1994. Two pages were dedicated to Huse, who grew up with his grandparents at Plummer Farm near Union.

According to Roberts’ narrative, Huse became an ordained minister. The Milton Mills Church granted Huse his local preachers license in 1898. In the same year, he delivered his first sermon, which included the line, “He first findeth his brother,” perhaps a portent to his tie to the Old Man’s Little Brother. As Huse traveled extensively over New England and New York, where he seemed to have spent a lengthy time, his sermons often mentioned the “Little Old Man of the Mountains.”

In his history book, Roberts was kind enough to explain that it was located on a stone on the side of Branch Hill Road, and was a miniature of the famous profile in the White Mountains. Roberts wrote: “Could it be that Mother Nature planned this special profile just to go along as a family for the more famous profile, The Old Man of the Mountain in Franconia Notch? Sonny Jim is just as famous to us natives as his father in Franconia. Located on Branch Hill, almost one half mile from old route 16. According to Raymond Huse, who would not take credit for locating this profile, William Laskey was its founder.”

Beside a country roadway
By tourist’s eye unseen,
Around it pastures green,
My thoughtful rural neighbor
Discovered near his “place”,
The profile of a face.
The heavy brow is thoughtful,
Just like the famous other
He seems to us who know him
The “Old Man’s” little brother,
His face is not so solemn,
Rebuking human sin,
His lips in storm and sunshine
Are parted in a grin.
He doesn’t guard the mountains
With their vast stretch of miles,
But just a patch of pasture
So that is why he smiles.

A discrepancy in the two writings creates some confusion about the relationship between Sunny Jim and the Old Man. Huse calls the profile the Old Man’s little brother, but Roberts alludes to Sunny Jim as the Old Man’s son. For the most part, the smaller silhouette is known as a brother, as Huse designated it. 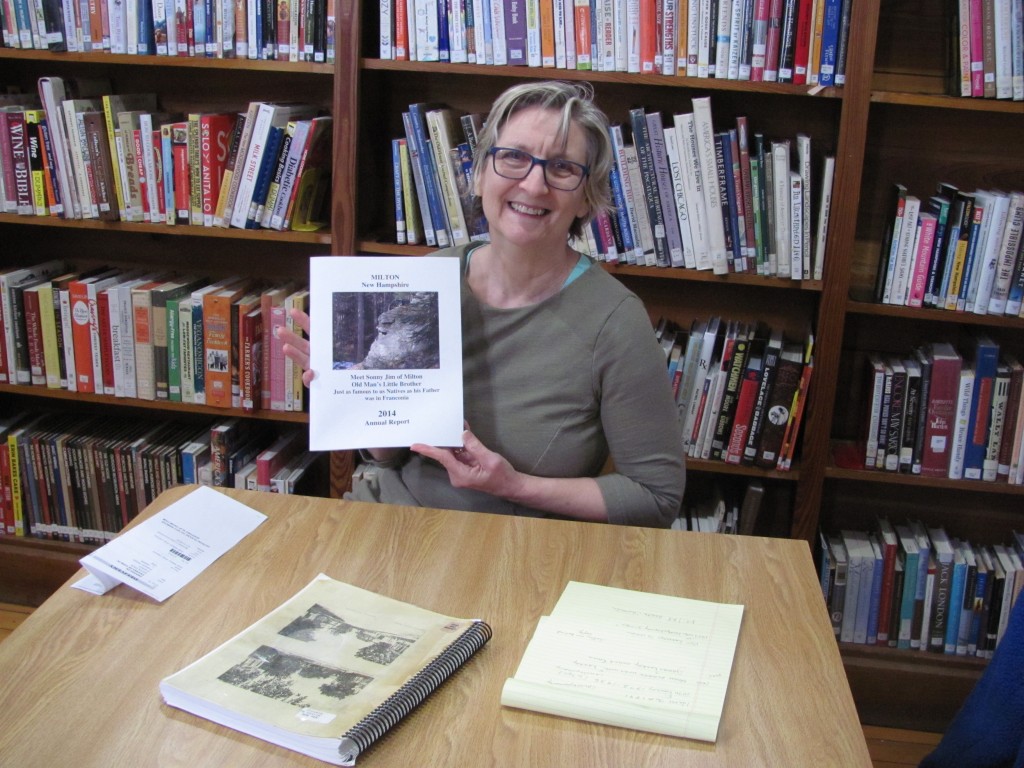 While Huse was at the First Methodist Episcopal Church in Ithaca, New York, he paid homage to his friend Laskey, who had recently died, on March 4, 1936, in the form of a lengthy editorial to the Courier, the local Milton newspaper. In the eloquently written eulogy, Huse provided a perfect biography of Laskey:

“Willie F. Laskey was born on Branch Hill in the town of Milton in 1872. He grew up in sight of the quiet mountains of New Hampshire and Maine and loved the birds and flowers and trees of the winding road. The sight of the purple grapes hanging in festoons from the orchard trees; the scent of boiling sap in the early spring, and all the quiet wonder of all the out-of-door world were dear to him.

“He attended school at the old Branch schoolhouse which now stands mute and full of memories. He also spent several years as a student at Nute High school where he was one of the charter member students. For much of the time he walked five miles to this school though he is not enrolled as an alumnus. No one among us got more of a cultural outlook from his studies than did he.

“With his love of the beautiful he transformed the bush-bordered road which led to his home into a beautiful avenue with shading trees. One day when he was walking home in the sunset he discovered the little profile on the ledge which has been called ‘Sunny Jim’ or ‘The Old Man’s Little Brother.’”

The extensive testimonial went on to talk about Laskey becoming an invalid as a young man. He collected antiques, not for their value, but for the story they told. He was active at his church and the Grange, and was caretaker of the village cemetery at Milton Mills, appreciating each life and its memory in their resting places. He had no family of his own except for nephews and nieces.

Laskey is buried in that cemetery, and a tall, stoic obelisk marks the grave of “friend of birds, and flowers, and folks.”

His monument says nothing of Sunny Jim, but the profile is nevertheless a part of his legacy. Although the Little Brother seemed deliberately elusive, I found the Old Man’s Little Brother quite easily on a clear afternoon this past winter. Saplings and trees had grown around the large slate gray rock, but traipsing around unruly forest terrain was not needed. The slant of the setting winter sun clearly lit his silhouette. His nose, worn by the vicissitudes of time or the predictability of miscreants, is missing for the most part, but the jutting chin, heavy forehead, thick eyebrows and full lips are still a clear and obvious replica of the fallen Old Man.

And, as Huse wrote in his poem about the smiling profile, Sunny Jim greeted me with a wide grin that seemed to say, “You found me again.”

An Ode to a Fallen Friend

On Saturday morning, May 3, 2003, I turned on the radio and heard the news that the Old Man of the Mountain had fallen. I realized pretty quickly that this was going to be hard for people and started jotting down some thoughts. 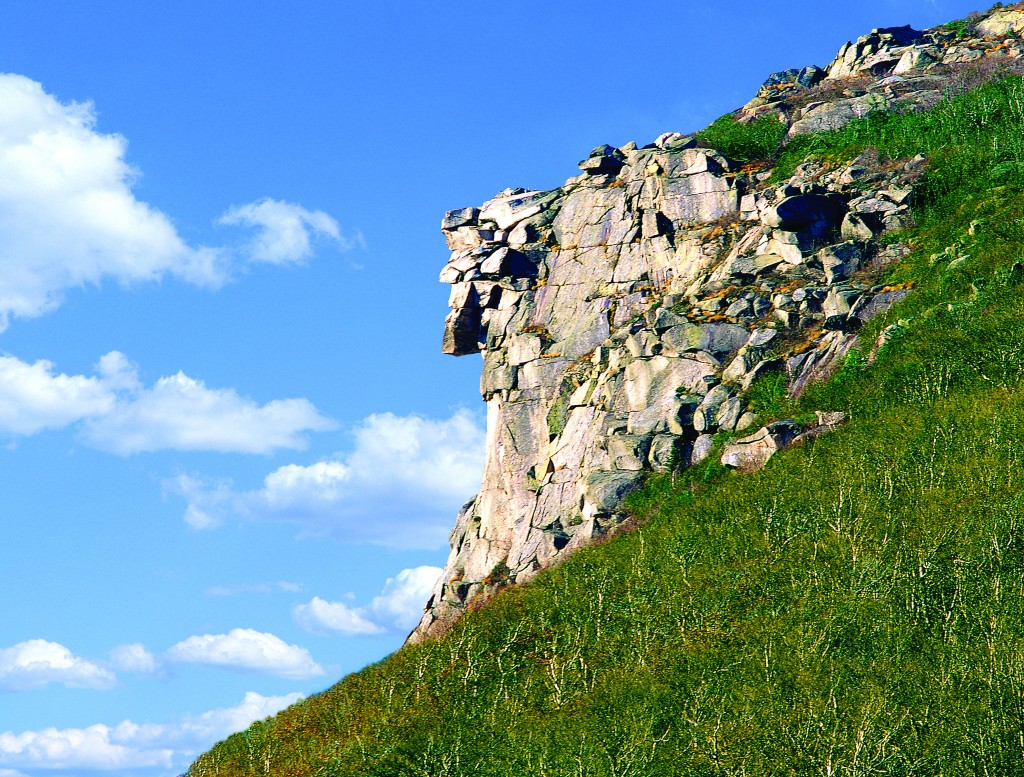 The Old Man of the Mountain. Photo by David Noble

As sometimes happens, the thoughts seemed to organize themselves into the words of a song, “Goodbye, Old Man.” I picked out a melody on the guitar and decided to record it in case it might help comfort those feeling the loss.

I sent the song to a contact at NH Public Radio and they played the song as part of their story that morning. That, I thought, would be the end of that.

The next day, I got a call from state senator Sylvia Larsen, who asked if I would be willing to sing the song for the Senate. Needless to say, I was nervous but honored to sing in that historic chamber. Later, I was invited to perform “Goodbye, Old Man” at the memorial service for the Old Man of the Mountain, and the song was included in introduction to the manual for General Court for that year.

In the years since the Old Man’s falling, I’ve had occasion to sing “Goodbye, Old Man” across New England and have been surprised by how much it still resonates with listeners, perhaps because it touches on our own losses, many of which have roots in this place. 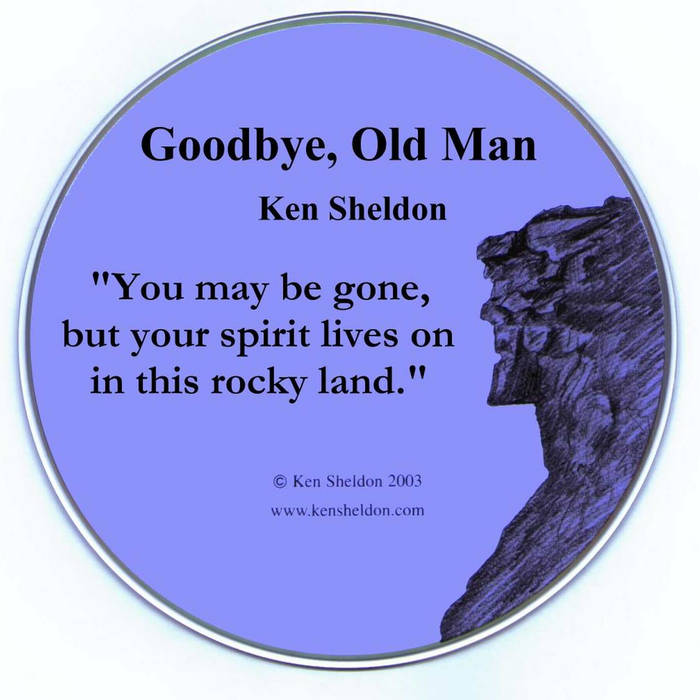 You can listen to Ken Sheldon sing the song here. 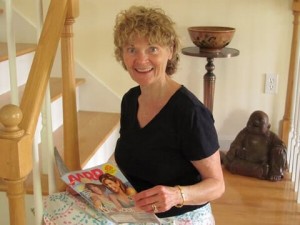 Bonnie Meroth is a multi-media journalist and travel writer who has contributed to The New York Times, The Los Angeles Times, Seacoast Media Group, People Magazine, Time Magazine, Better Homes and Gardens, Good Housekeeping, Scotland Yard News, and Police Marksman Magazine along with two award-winning books and some writing for national TV. She lives in Epping where she operates her public relations, sales and marketing company, continues as an author, journalist, literary agent, editor, justice of the peace and notary.