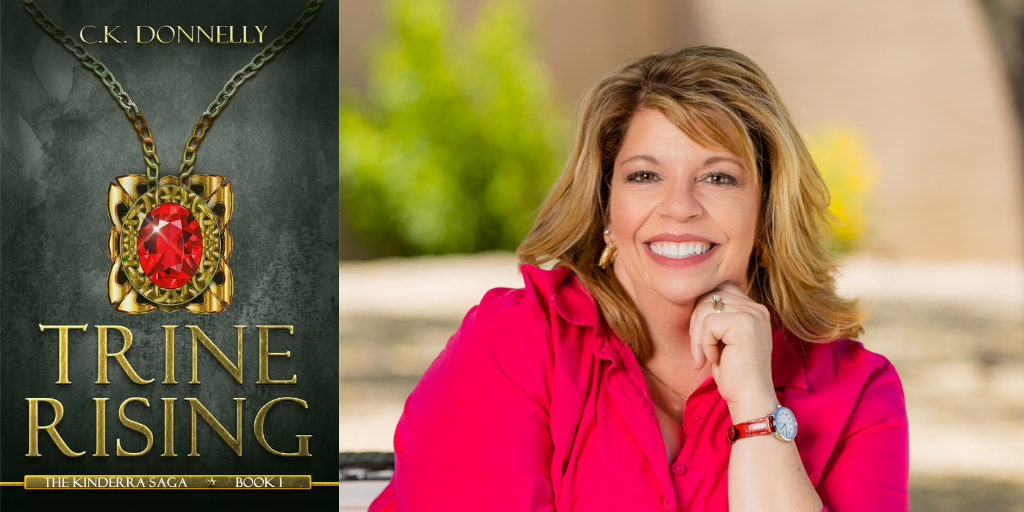 Cindy Donnelly Kibbe may be good at a number of things, but there’s one thing she can’t quite get the hang of: giving up.

This self-described “unsuccessful quitter” — and now first-time novelist — spent 20 years creating a fantasy world and populating it. Over more than two decades, she crafted adventures and challenges for her protagonist, watching her discover, learn, fall and rise. And now, fans of young-adult fantasies have been invited to immerse themselves in that world.

“Trine Rising,” Kibbe’s debut novel has been released, and an online book event at The Bookery on October 29 allows the former longtime Manchester resident to return to the place where she started along the path to The Kinderra Saga.

“‘Trine Rising’ is a Granite State project,” says Kibbe. “It was born and bred in New Hampshire. So as I bring my main character everywhere and share her, one of the first places I wanted to go with her was to Manchester.”

It was during a walk in the snow along the Merrimack River when Kibbe began dreaming of a young protagonist named Mirana Pinal and of Kinderra. Mirana is one of a small number of people born with one of three magical powers — seeing, defending or healing. Mirana was born with all three. Those powers have the potential to bring peace to her war-ravaged land, or destroy it.

“It all started with ‘Star Wars’ fanfic,” Kibbe says from her current home in the suburbs outside of Scottsdale, Arizona. “But writing fanfic is like being in a cover band. You’re never going anywhere unless you write your own stuff.”

The first question, then: How do you create a universe from nothing?

“I had a minor character I had written who had a cool backstory,” she says. “It really resonated with me. So I pulled that out and reworked it and eventually that became ‘Trine Rising.’ I spent time building a system of magic, how that would work, creating the landscape and how that would interact with characters, the economy. I developed my characters and started writing.”

It turns out, world-creating takes time. And a great deal of persistence. Kibbe never completely left Kinderra, and over the years wrote, rewrote and honed the story, finalizing the first draft in 2005. She and her husband moved from New Hampshire in 2014, and two years later she decided to see the passion project through.

She divided one long book into three, connected point A to point B, and added details and removed others.

“There’s a horrible and very apt phrase in writing called ‘killing your daughter,’” Kibbe says. “That’s where you end up axing paragraphs or characters you love, but who don’t serve the story. I’m pretty brutal with cuts.”

What: C.K. Donnelly will host a book event through The Bookery.
When: Thursday, October 29 from 6-7 p.m.

Attendees will have a chance to win:

Register for the event here.

While it may have been a long and sometimes arduous path, there was never any real thought to abandoning the project. After all, not quitting is one of the key assets in this former Queen City journalist’s skill set. She made the final edits, typed in the last line and put a period on the last line of her first book just six months ago.

What initially inspired you to become a writer?
“It was ‘Star Wars.’ It was the winter of 1977 and I had just turned 11. I was entranced with it. I saw it hundreds of times. I know all the weird trivia and I can stump the best of them. It lit a fire in my brain and as a kid, I would just make up my own stories within that universe and create my own characters. I changed Luke to be a young girl who looked suspiciously like me. There was some very juicy, fun stuff to play with and it inspired my love of writing. When ‘M.A.S.H.’ was on TV, I made up stories that I was a little ‘Doogie Howser’ before we even had ‘Doogie Howser M.D.’”

Tell us about your writing process.
“I would write in between waiting for interviews, but I always made sure my work was done. I work pretty hard, so I would write anytime I had the chance. I prefer larger blocks of time. I’m not good at dashing something off in 20 minutes. I wrote evenings when I’d get home from work. I wrote on weekends. There was a span of about 18 months where I didn’t see the outside world when I was getting through the original rough draft.”

What were some of the biggest challenges along the way?
“Completing a novel is a daunting task, but I will say that this particular story started off, and — boom — I had the entire thing in my head. But it was the time I needed and certainly, life being what it is, parents get sick, downturns in the economy, having to build up a business as a freelancer, trying to find jobs and get money in. Time was probably the biggest challenge.

Also, looking for an agent was soul-crushing. I don’t deal well with rejection, so I knew it was going to be a big hurdle. That was extraordinarily difficult. From an author’s perspective, it’s hard to take because you wonder, did it get lost? Did they really read it? Did it get to the right agent?”

How is having an actual book out in the wild different from how you thought it would be?
“I don’t know if I’ve had the time for that to register. I was so looking forward to it, and now people are just discovering that I exist. But I’m looking forward to having conversations on Zoom, in-person or on social media about the book and the characters. I get to have that interaction finally. It’s not a little secret in my brain or on my hard drive anymore. It’s out in the world and I want to share it with people. I’m so happy that people can play with me in my world.”

What has it been like to see your book completed?
“I still don’t think it’s hit me. It’s been an incredible blessing. I genuinely do not have a frame of reference for this kind of gratitude and joy. I’m blown away that it’s out there and getting great reviews and winning awards or making into a finalist short-list and it’s resonating with readers.

When I made the decision to self-publish, it was something I was praying about, ‘Who are you writing this for — the literary elite and agents, or for readers? You’re a storyteller and you want to share this story with readers.’ Once I made the internal decision, everything changed. Now that it’s getting out to readers, it’s getting positive feedback, it’s the most incredible experience I’ve ever had in my life other than marrying my husband.”

Register for the book event at The Bookery.

Categories: Book Reviews, Things to Do

Where to Celebrate Independent Bookstore Day