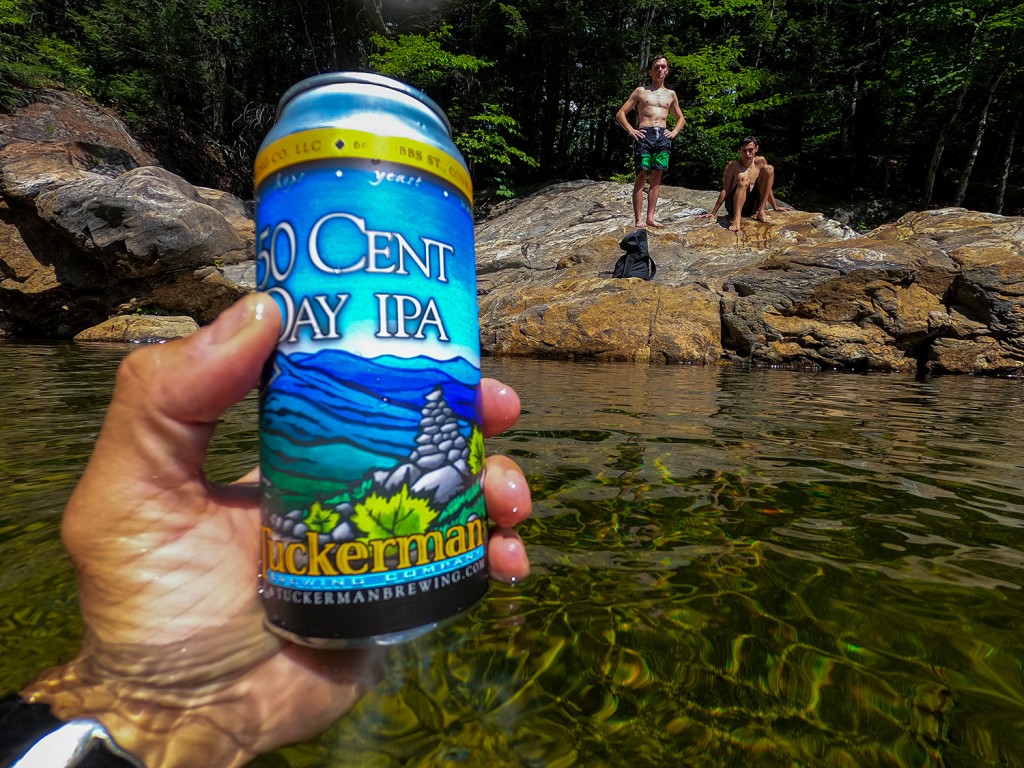 Most people who have been to or live in the Mount Washington Valley are no stranger to the way the mountains, rivers, forests and fields of this area seem to bring people together, over common interests and pursuits. Ingrained in the culture of the valley is a curiosity for the outdoors that translates into a curiosity for all of that which supports, complements and enhances the outdoors. It is not uncommon for locals to spend a day traversing the entire Presidential Range on foot, to rise before the sun to shuffle up Mt. Washington on skis, or to watch day turn to night from the top of Cathedral Ledge, and apart from tired legs and stronger lungs, the thing that most often follows these epic adventures is
a cold (local) beer.

Enter Tuckerman Brewing Company, founded by Kirsten Neves and Nik Stanciu. If you’re an outdoor enthusiast, you’re likely familiar with the Conway brewery. This is because Tuckerman has positioned itself at the center of the outdoor recreation scene — and also the beer scene — in New Hampshire and throughout the Northeast. They’ve hosted guest speakers in the industry, supported and sponsored various races and events in the community, and been a general friend to the outdoors since their start in 1998. 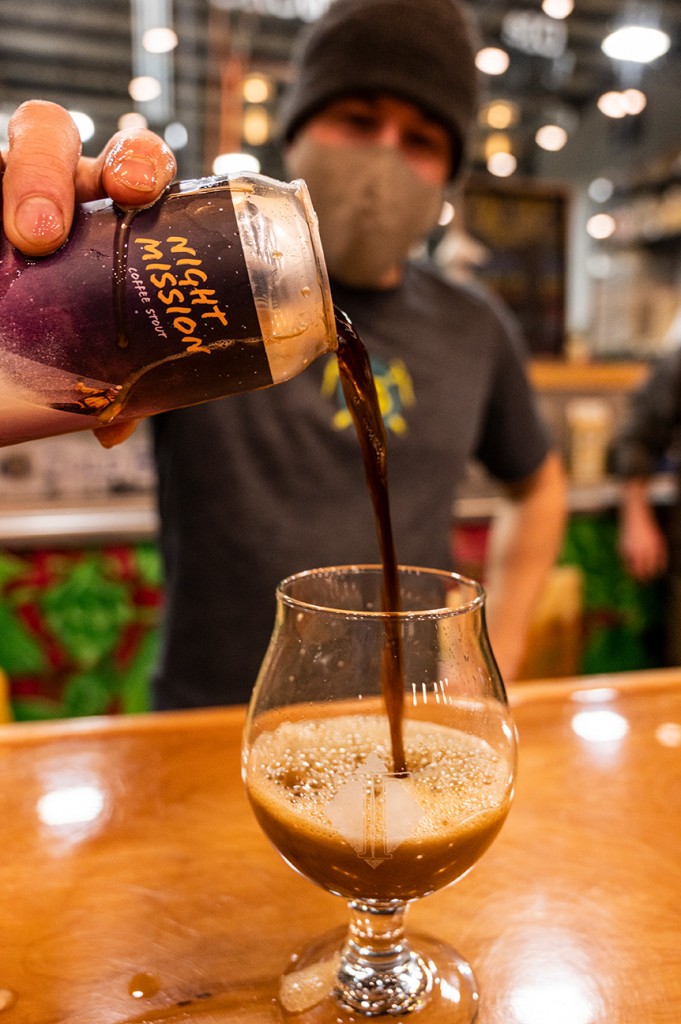 Ski the Whites — a ski, running and bike shop owned by Andrew Drummond — is the force behind outdoor events such as the Last Skier Standing (a last-person-standing-style ski racing event), Friday Night Vert (a weekly mountain run series hosted by Black Mountain in Jackson), and the NoCo Virtual Race (a virtual mountain bike event). All are community events that bring athletes and enthusiasts of all ability levels together — outside.

Beyond their love and support for the outdoors, the folks at Tuckerman Brewing and Ski the Whites have another major thing in common, which transcends their pursuits in the mountains: unrelenting curiosity.

It was this same curiosity that led Pier Pennoyer, a valley local and fellow seeker of outdoor pursuits, to begin roasting coffee to sell at Ski the Whites. And it was also that unrelenting curiosity that inspired Pier and Andrew to sit down with Tuckerman Brewing’s production manager and brewer, Jeremy Fitchett, to brainstorm ways they could incorporate Ski the Whites coffee beans into a Tuckerman Brewing beer.

The consensus among those who participated in creating the resulting beer is that it was fun. The team played with various methods of using Pennoyer’s coffee beans, different beer styles to pair with them, and a process that could only be described as curious. They landed on Night Mission, a 6.3% nitro coffee stout — a first for Tuckerman in that they had never experimented with a nitro brew before (there were, maybe, some exploding beer cans involved in the process). This beer, like all of Tuckerman’s beers, is local through and through, from start to finish. The brewery grows its own hops on-premise, and sources its barley from Shady Elm Farm, located down the street in Conway. Whatever isn’t grown or sourced in New Hampshire is done so just over the border in Maine. Tuckerman’s brand manager, Liz Cancelliere, says of their process, “We have so many resources right here in front of us — why would we outsource?” 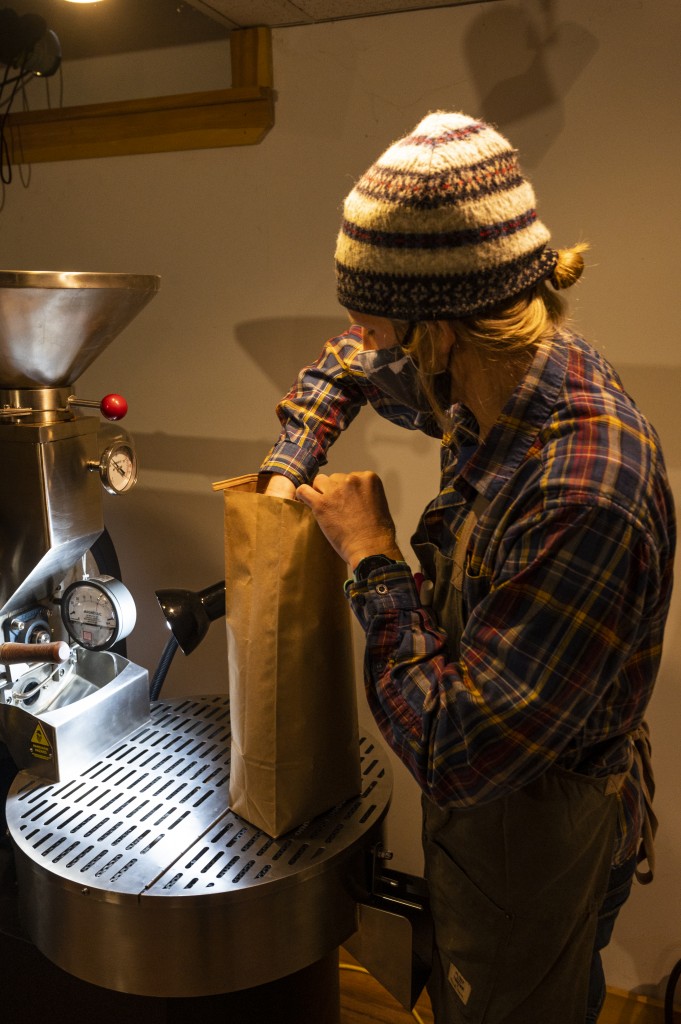 The theme of “local” is in everything that Tuckerman Brewing does, and everything that they are. Cancelliere notes, “Our brand is so tied to this valley; we want to support the people who make up our community.” The brewery and tasting room have, give or take, around 12 employees that all live, and recreate, in the Valley. In the warmer months, Tuckerman hosts local musicians to play on their outdoor stage. But musicians aren’t the only local artists that Tuckerman helps to spotlight and create work for.

Night Mission is part of Tuckerman’s Limited Release Artist Series. The exclusive beers in this line are collaborations with local or locally invested artists who design the artwork for the can labels (which are, unsurprisingly, locally screen-printed). A quick browse through the series’ several artists shows that, overwhelmingly, craft beer and the outdoors seem to have a harmonious relationship, and art has its place within that relationship too.

Emma Yardley, the artist behind the label for Tuckerman’s ALTitude (7.6% sticke alt) is an avid skier, climber and traveler; Hannah Marshall, who drew up the label for Tuckerman’s Dawn Patrol IPA (7.1% New England IPA) is a longtime White Mountains climber; and Night Mission, following suit, features artwork by Kat Maus, a well-known illustrator of outdoor scenery and dreamy landscapes of the Northeast.

Maus was approached for this label after creating a piece depicting Boott Spur, a popular ski line on Mt. Washington, which Drummond sells at Ski the Whites to benefit the Mt. Washington Avalanche Center. Maus says that her inspiration for the Night Mission label came from the colors she used in her Boott Spur piece, paired with Drummond’s striking photos of Tuckerman Ravine under a night ski. 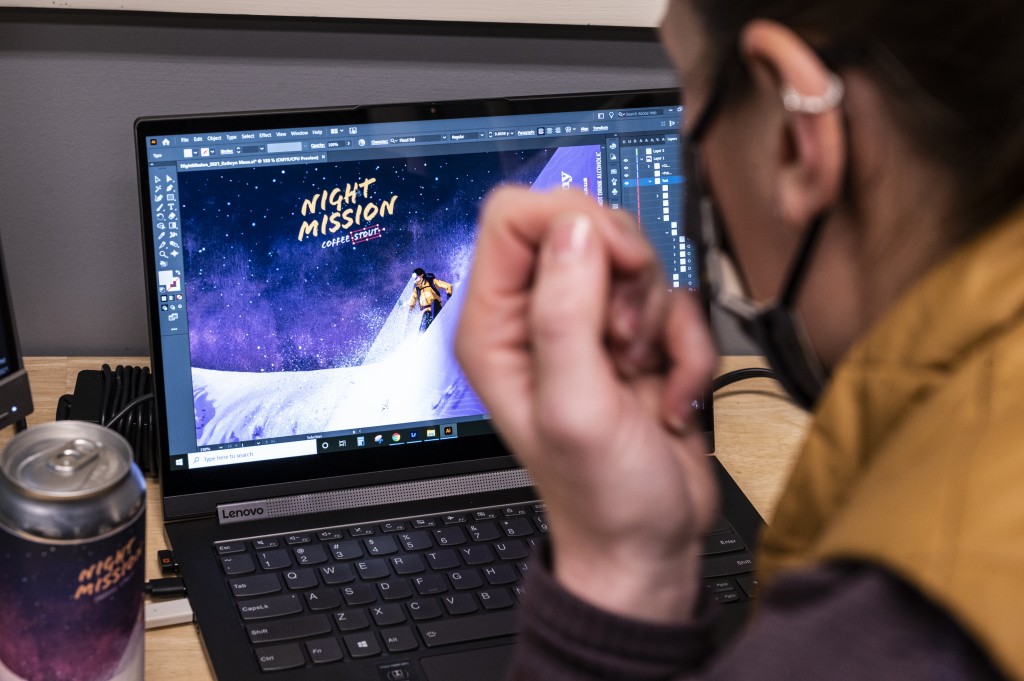 In other words, Night Mission is a beer that Tuckerman brews; it’s brewed in collaboration with Pier Pennoyer’s coffee beans from Ski the Whites, the beer is then canned, onsite at Tuckerman, and wrapped in a locally printed label designed by Maus, whose work can be found, among other places, at Ski the Whites. What’s shared by all of these individuals and their various mediums, apart from the many intertwined pieces of their lives, are the same forces behind this partnership, and most of their partnerships.

These concepts come naturally to the team at Tuckerman, to the people of Ski the Whites, and to Kat. These are the same concepts behind playing with flavors and ingredients until the perfect pairing arises, or waking up before the sun to ski fresh lines, or blending colors in the pursuit of beauty. “There’s something unique here for sure; there’s this common desire when you find people with similar interests, who are fortunate enough to have businesses and then rally around an idea … all of these stars kind of align,” says Pennoyer. “We’re always just looking to get up, get out and go. We’re all just firing on all cylinders.”

Pennoyer talks about how when Fitchett and Stanciu, of Tuckerman, came to Ski the Whites to pick up the final batch of coffee for Night Mission, they had just finished up a lap on “the Sherb” (the John Sherburne Ski Trail). Pennoyer and the Ski the Whites team had been there earlier that morning as well, and it’s no surprise that Maus once  created an art print depicting scenes from this trail too. Maybe, out of all of the things  connecting Tuckerman Brewing Company, Ski the Whites, Maus, and the many other brewers, businesses, outdoor enthusiasts and artists in New Hampshire, that anecdote serves as the perfect illustration of this connection. 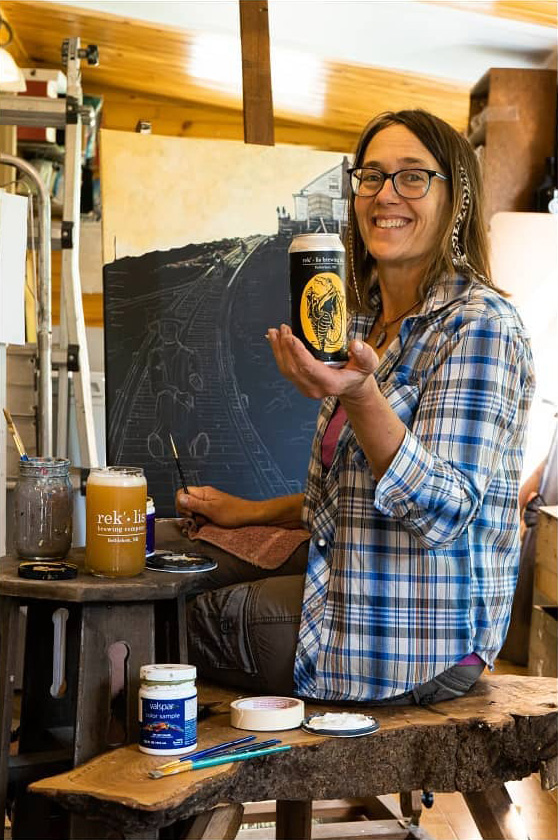 For their IPAs Humble Hopper and Pretentious Hopper, Rek’-lis commissioned New Hampshire native Kirsten Carruth for the label art. Carruth is a painter, teacher and illustrator who has worked commercially, painting murals, signs and logos for restaurants including Lago in Meredith, Walters Basin in Holderness, the Airport Diner in Manchester and many others, along with large-scale murals at the Bethlehem Public Library and the Dickey Center at Dartmouth College in Hanover. The unique and classical style of her art work, combined with her creative way of turning words into illustrations led her to be the first featured artist to design a Rek’-lis can. 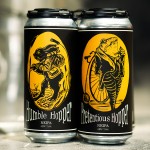 Rek’-lis Brewing Company was born from a love of community and the outdoors. The mountain biking, hiking and running trails surrounding the brewery in Bethlehem inspire both the beers at Rek-lis and the people making and serving them.

“From the start, our staff has been full of talented artists with well-established creative styles backed by unforgiving passion. As a brewery that was built around locals, it felt right to equally inject it with the creative styles of those artists. Our walls are always endowed with great works of art from local artists, and the majority of our can art has been built around original artwork,” says Phillip Renton, resident photographer and marketer at Rek’-lis Brewing Company. 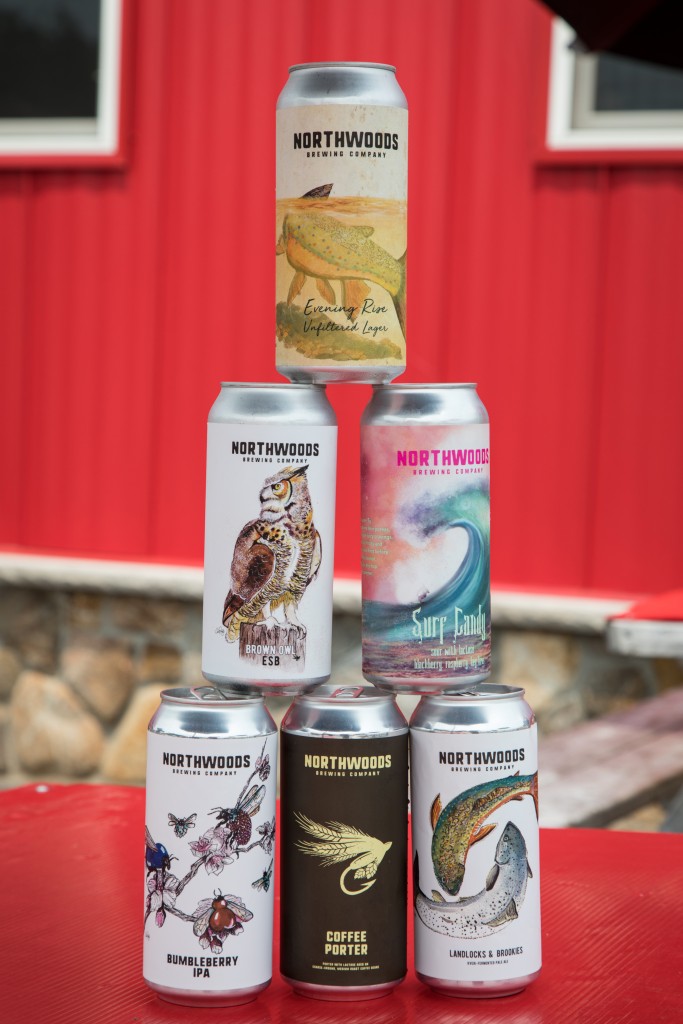 Sarah Fenerty is responsible for the vivid and nature-inspired artwork that wraps all the cans at Northwoods Brewing Company. Photo by Kendal J. Bush Photography. 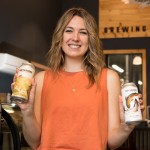 Sarah Fenerty is responsible for the vivid and nature-inspired artwork that wraps all the cans at
Northwoods Brewing Company.

Beer, art and the outdoors are behind everything done by the folks at Northwoods Brewing Company in Northwood. Since 2018, when the brewery first opened, Sarah Fenerty has been the artist behind the can’s labels. Fenerty is also the daughter of the brewery’s founders, and pours her and her family’s love for northern New Hampshire (including wildflowers, fly fishing and local wildlife) into each design she creates.

“I think that beer and art make for an incredibly natural pairing because they are both storytelling in physical forms. There is so much that goes into the process of creating each. Each beer is a mini epic within its own right — the journey of its lifespan from initial idea to final product is always so fascinating to me,” says Fenerty. And on the topic of bringing community into the picture? “I think the coolest part of it all is that we put our beer and art out into the world with our known stories and then it becomes this shared story and each person who picks up a can further adds to it.” 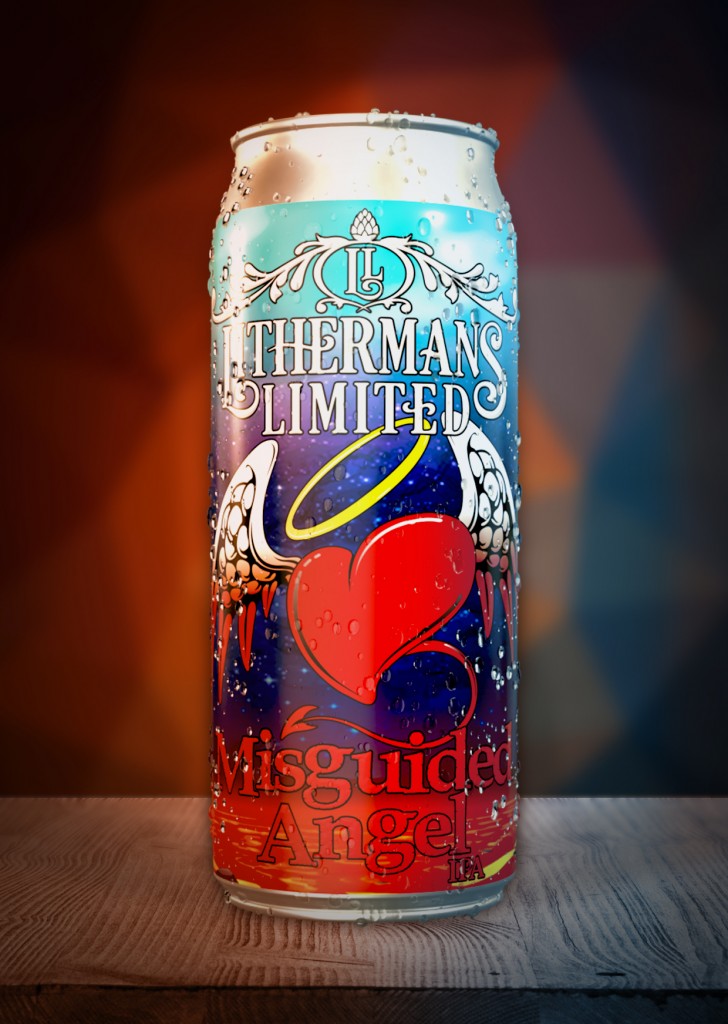 Michael Hauptly-Pierce gives credit where credit is due: “As with our entire visual identity since we were brewing in Doc’s [partner Steve Bradbury’s] driveway a decade ago, Steve Lee of Steve Lee Designs in Concord designed this artwork and created this label.” Photo by Steve Lee. 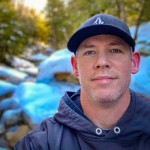 Concord-based Lithermans Limited takes the art of beer can design to a higher octave by incorporating musical notes alongside the flavor notes of their innovative roster of brews. And they don’t dumb down the references for their own fans. Their immensely popular Misguided Angel NEIPA is a tip of the hat to Canadian rapper Mad Child, who calls himself (among other things) “the misguided Angel” and “the angry smurf.” “Mad Child has been in the hip-hop scene since it started to coalesce, and Misguided Angel was one of the first ‘New England-style’ IPAs to be brewed in New Hampshire,” says co-founder and label czar Michael Hauptly-Pierce, who (full disclosure) often writes the “Sips” department for New Hampshire Magazine.

“NEIPAs are different from West Coast or old-school IPAs in three ways,” says Hauptly-Pierce. “Number one, the focus is on aromatics and not bitterness. Number two, the mouthfeel is soft, like a big stout, as opposed to crisp, like a lager and, lastly, haziness is a must, brah, to at least some degree.” And that’s all music to the eyes, ears and tastebuds of Lithermans fans.