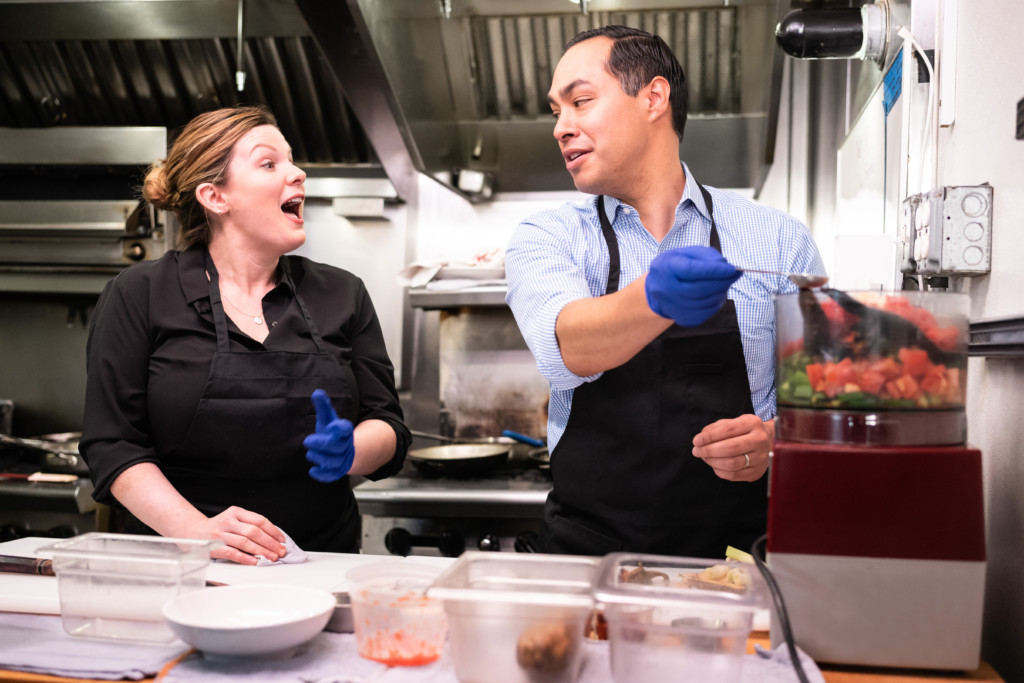 The diner stop is a staple of New Hampshire primary politics. But anyone who’s ever had their breakfast interrupted by a glad-handing presidential candidate could tell you that, even with the most friendly politicians, the format has its limitations. Candidates are usually surrounded by a sea of staffers and press corps and, in turn, they often don’t really let their guard down — so those interactions often revert back to clichés and campaign sound bites.

This New Hampshire-grown web series turns the idea of a culinary campaign stop on its head: Instead of serving up selfies and handshakes to unsuspecting restaurant patrons, the candidates are serving up food that they’ve cooked themselves.

“When you’re holding a knife and chopping or blending or searing, you’re not as protected,” explains Seacoast chef Julie Cutting, executive chef and owner of Cure restaurant in Portsmouth. “You’re trying to just let loose and talk about things — you might not be as guarded as when you’re sitting at a table doing a formal interview.”

This isn’t Cutting’s first foray into food-inspired reality television. In 2013, she competed in the Food Network’s “Cutthroat Kitchen,” and earned her way to a spot in the semifinals of the cooking competition hosted by Alton Brown.

But Cutting and the rest of the “Candidate Kitchen” team — Executive Producer Peter Connors and Director/Producer Sally Northrop — want their series to be less cutthroat, more conversational.

“Food is a common ground for everybody,” Cutting says.

And in that spirit, the show veers away from questions about policy in favor of letting the politicians loosen up and show people a more personal side.

“We wanted it to be a very inviting atmosphere for the candidates,” Cutting says. “We’re not talking politics at all, we’re just focusing on the food and the recipe.”

The premiere episode features former US secretary of Housing and Urban Development Julián Castro dicing potatoes, scrambling eggs, and swapping personal stories in Cutting’s kitchen as the pair whip up a plate of breakfast tacos — Castro’s recipe of choice for the show. The candidate explains that he chose this dish because it was a staple of his childhood cuisine.

“I don’t remember a time when we didn’t eat them, they’re so common,” Castro says. “I grew up in San Antonio, Texas, in a household with a grandmother who was born in Mexico and had come over as a young girl, and she grew up her whole life eating tacos.”

The “Candidate Kitchen” crew say they’ve sent out invitations to lots of other candidates and hope to schedule a full lineup of episodes in the months to come. And since the series is available online, they hope the show brings a more candid view of the candidates to those following the presidential campaign all across the country.

“We’re really trying to dig into a humanizing look at the candidates [with] a meaningful recipe to them and a natural flowing conversation,” Cutting says. “Something that’s not as regimented you see throughout every interview.”

And who knows, maybe this will be the start of a new way to size up presidential contenders. With two dozen candidates and counting, voters will need some way to start whittling down their choices as the primary season ramps up. What better way to see who can really take the heat — literally or figuratively — than with a cooking competition?