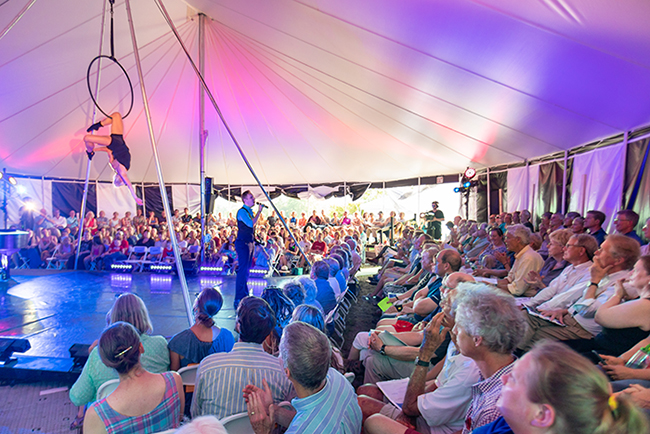 She is dangling from trapeze ropes one moment, unpacking her contorted limbs from a suitcase the next. Then, spinning five golden hula hoops in a mesmerizing blur. But fiery-haired circus artist Cassady Rose Bonjo’s turquoise eyes perform the most impressive stunt: connecting, it seems, with every audience member under the 350-seat big top.

In the wide eyes of opera singers and instrumentalists, the rarity of what is occurring is revealed. This is show number three of four sellouts for “Singers & Swingers,” Opera North’s inaugural production at Blow-Me-Down Farm in Cornish, and these classical music pros are still awestruck when Sam Ferlo plucks a double bass from the orchestra and balances it on his chin, when Andrea Murillo and Kyle Driggs juggle a fifth red umbrella, when wild applause erupts in mid lyric line, when Bonjo lands gracefully … on the piano.

This summer’s Hoedown at Blow-Me-Down Farm (Singers & Swingers 2.0) from July 12 through 14. Tickets for the 2019 show are now on sale at operanorth.org.

Call it opera fusion: a new sort of mashup of vocal acrobatics and gravity-defying feats. This unexpected collaboration between Opera North artistic director Louis Burkot and Mark Lonergan, whose directing credits include Circus Smirkus and the Big Apple Circus, kept families and opera fans simultaneously spellbound. If you missed July’s limited engagement, you can still help the virtuoso minds behind this evening of pop opera and circus antics pull off a trick with lasting impact. Can Opera North transform a long-overlooked historic property into a summer festival grounds and make Cornish reappear on the map: a thriving hub of arts and culture, as it was at the advent of the 20th century? 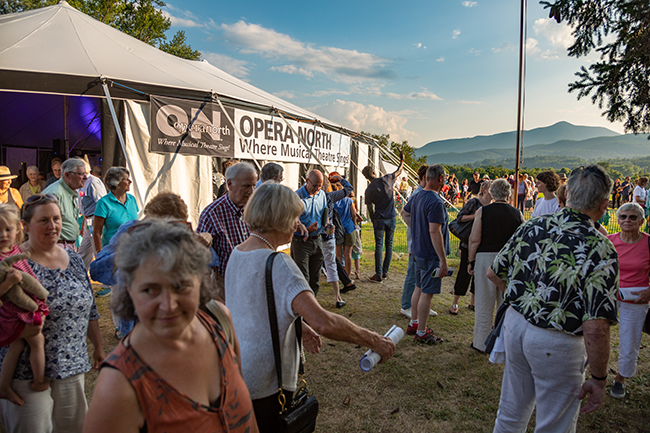 If you’ve never heard of Blow-Me-Down Farm, don’t feel bad. Even Google Maps hasn’t a clue where these 43 idyllic acres hide. “No one has ever seen this property,” says Opera North development director Maria Laskaris. But stroll the stone-walled field behind the rundown farmhouse, and you’ll understand why she and colleagues instantly envisioned a permanent home here for their semi-nomadic organization. This Connecticut River-side estate, with Mt. Ascutney in full view, already feels like a miniature version of the Boston Symphony Orchestra’s Tanglewood. And Charles Beaman Jr., who purchased the farm in 1883, already proved its magnetism.

Up Next for Opera North
Derrick Wang’s one-act opera, “Scalia/Ginsburg,” will be performed at the Briggs Opera House in White River Junction, Vermont, on October 12 (tickets are $55).

It was Beaman who convinced Augustus Saint-Gaudens to rent and eventually purchase a house up the road. Hot on the tail of the preeminent sculptor, known for generously uplifting fellow artists, came a cavalcade of creatives starring the likes of illustrator Maxfield Parrish, painter George de Forest Brush, poet Emma Lazarus, dancer Isadora Duncan and actress Ethel Barrymore. For entertainment, the Cornish Colony’s dozens of denizens staged elaborate outdoor plays; Blow-Me-Down Farm was often their stage.

Opera North’s plans for the National Park Service-owned property pay homage to the Colony’s artistic spirit. “Their vision and ours overlapped quite nicely,” says Rick Kendall, superintendent of the Saint-Gaudens National Historic Site, who was on the team that saw maximum promise in the 36-year-old opera company’s proposed partnership. On a night when storms threatened but never materialized, his grin is as wide as his broad-brimmed ranger hat as audience members and performers spill out of the tent, into the twilight. The words of “Somewhere,” the finale of a “West Side Story” medley sung by Opera North’s young resident artists, still float in the air. Bonjo tells admirers she wishes she could stay all summer. But the circus is about to blow out of town. And now, the real work begins if this is to become “a place for us” to be entranced by music, dance, theatre and the visual arts summer after summer. 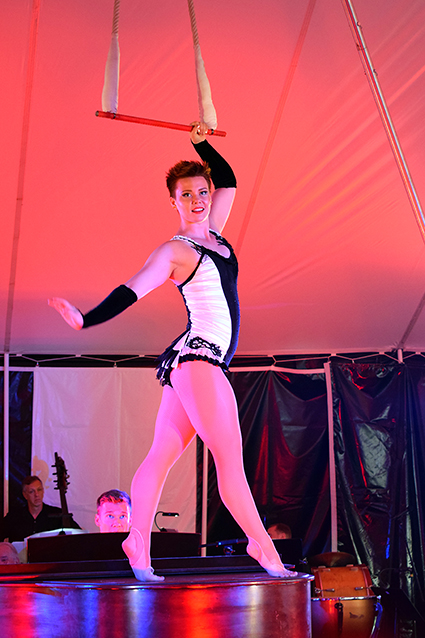 “We’ve proven the concept. Now, we just have to raise the funds for the next phase,” says Laskaris. With an OPERA America Innovation Grant and economic development funds from the Northern Border Regional Commission secured, the preservation and rehabilitation of the Beaman farmhouse, a roughly $350,000 project under the direction of local architect Andrew Garthwaite, is already more than halfway there. The building will house administrative and backstage facilities and accommodate artists in residence.

Larger dreams wait in the wings: a seasonally permanent tent; a weatherproof venue inside the property’s four-story, 19th-century red barn; a riverside stage; educational programs. More is at stake than the salvation of the farm and its structures. Lebanon-based Opera North is the lone surviving full-time, professional opera company in northern New England. And with the typical age of opera attendees now north of 70, sustaining this art form requires a new mindset: one that deconstructs opera, pushes boundaries and entices new audiences. At Blow-Me-Down Farm, we’ll “use our artistic assets in combination with other artists to do something different,” says Laskaris.

In the 1950s, kids fell for opera while glued to Bugs Bunny cartoons. Under the Blow-Me-Down big top, a little boy with a ringside seat doesn’t realize he is the face of what’s possible in the 2020s. His gaze is riveted during the aerial acts. He applauds more vigorously than anyone after extreme ballerina Ashlee Montague tiptoes en pointe across glass bottlenecks. You might expect him to fidget, to be less engaged, when soprano Emily Misch takes the stage solo. But every high-pitched perfect note of Mozart’s “Queen of the Night” aria from “The Magic Flute” keeps him agape.