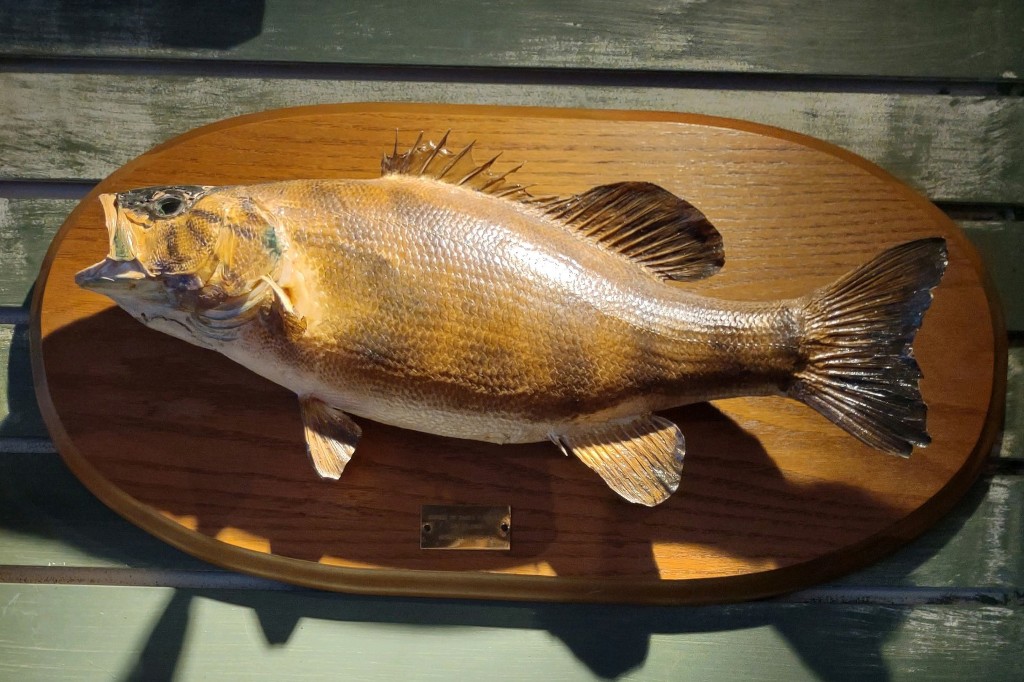 Preserved by a taxidermist from Center Barnstead, this remarkable fish, now on display at Camp Restaurant in Meredith, welcomes all challengers to the title bestowed upon it by Uncle Jim.

Merrymeeting, quietly tucked away in New Durham, is unique among New Hampshire’s many lakes. It was created when someone put a stopper in the sink, turned on the water, and forgot to turn it off. Our beloved Uncle Jim and Aunt Barbie spent the summer months there at their camp “Whitmere.” Although they didn’t have children, they did have “Freddie,” an invisible frog that occasionally made an appearance as a green cotton beanbag or was pulled, gently, from Uncle Jim’s pocket and held in his hand.

Uncle Jim and Aunt Barbie’s many nieces and nephews were welcomed throughout the summer months for what were magical visits that included swimming, rowing, balancing on the rocks catching crayfish, gathering around the fireplace in the evening listening to Uncle Jim’s enchanting stories, and, of course, fishing.

We fished off the floating white dock that was reached by walking down a creaky wooden ramp that had been built in sections and swayed with each step along the way. The girls took the fishing less seriously than the boys. I fished with my cousin Sally. Standing just at the edge of the dock, our small toes hanging over the edge, we stared into the crystal water and then waited until there was a slight tug. Then another, as our lines dangled from poles, usually light and certainly not spinning rods. Eventually, one of us would pull the line up as high as we could to discover a squirming sunfish about four inches long, its gray, scaly skin sparkling in the sun. 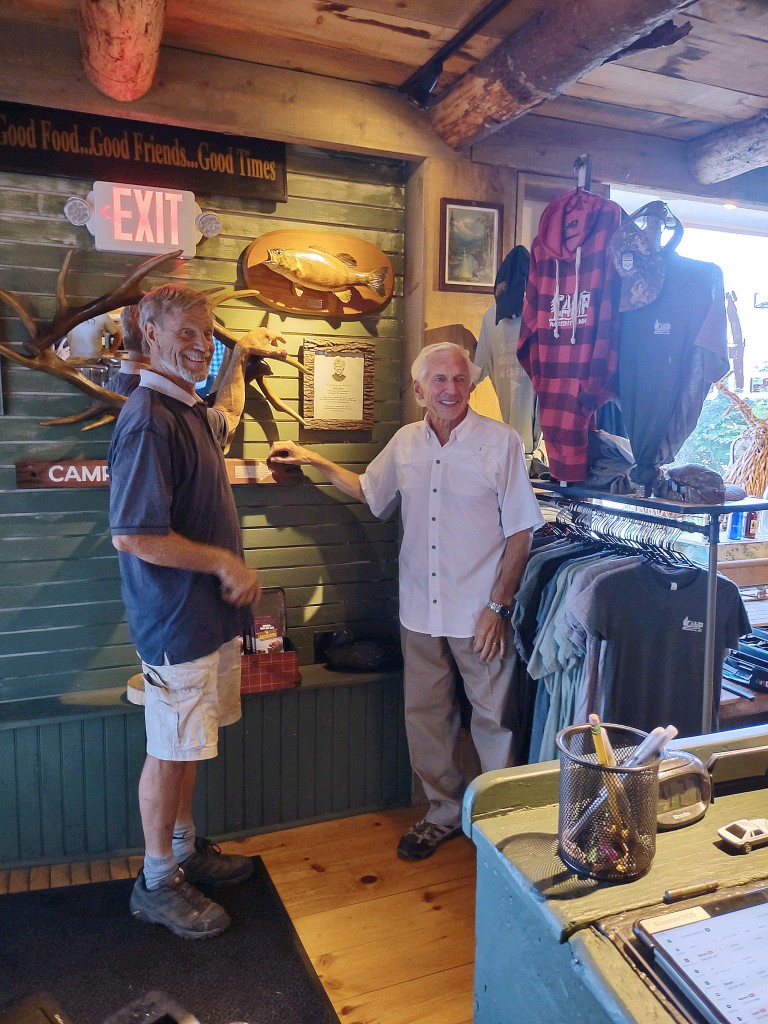 Alex Ray (left), of the Common Man Restaurants, and Jim Howard — the author’s brother — show off the mounted evidence, should anyone care to challenge Uncle Jim’s claim regarding Merrymeeting Lake’s famous fish.

“Aunt Barbie!” one of us would call out, “We have a fish! Will you come and help us?” Neither of us having the courage or the daring to touch the miserable, squirming creature. This was usually the time in the morning when she was sweeping sand from the camp and attending to other domestic chores. She would interrupt whatever she was doing and come to our rescue. The fish would be kept under lockdown for a few hours in a large blue-speckled enamel pot that was just next to the shore before an adult would quietly release the relieved fish back into the lake. By then, we were distracted by other activities, probably figuring out how to snitch one of her soft, sweet butterscotch brownies before dinner.

It was different for the boys and especially my three younger brothers who took the fishing seriously and had real fishing rods. One August afternoon when my brother Jim was 12 years old, he felt a strong tug on his line. Standing just at the edge of the dock, he began to reel. And reel. He leaned backward and tugged harder. Suddenly, jumping out of the water at the end of the line was an enormous smallmouth bass.

Uncle Jim, who had been sitting quietly in a chair on the shore, leaped to his feet, hurried out onto the dock, which now made louder creaking sounds, and with his gentle laugh and sparkling eyes, put his hand on his hip and pulled up the line to display the catch, and declared, in what for him was an unusually loud voice, “This is the BIGGEST fish that has EVER been caught in Merrymeeting Lake!”

With no time to spare, the fish was covered in ice and carefully wrapped in a towel. Bathing suits were exchanged for shorts and the two hopped into the car, Jim holding the fish carefully in his lap while Uncle Jim drove to a taxidermist in Center Barnstead so this remarkable fish could be stuffed and mounted. Memorialized.

Until Whitmere was sold, the mounted fish was proudly exhibited on the wall over a table that held the guest book, which Aunt Barbie presided over with much care. One could not leave camp without signing the “book” and at the same time glancing up at the stuffed fish. First-time visitors got the entire story of how “the BIGGEST fish in Merrymeeting Lake” was caught.

This summer, the famous fish found a new home at Camp Restaurant in Meredith, where it hangs just inside the entrance. Beneath the fish is a plaque honoring our Auntie Ruth, Uncle Jim’s younger sister, who was a beloved teacher in Plymouth and dear friend of Alex Ray, owner of Camp and the Common Man Restaurants, with the words: “It also serves as a testament to the simple joys and wide-eyed wonder that creates lifetime memories of summers at camp.”

Alex conceived of Camp, one of the Common Man restaurants, located in the Chase House at Mills Falls on Lake Winnipesaukee’s Meredith Bay, as a place where people could return and recall those magical days of summer. The interior has the appearance of a quaint Adirondack-style cabin. There are banners and camp artifacts from across New Hampshire, including a sign from Camp Quinebarge, where Jim’s son Stephen attended as a boy. 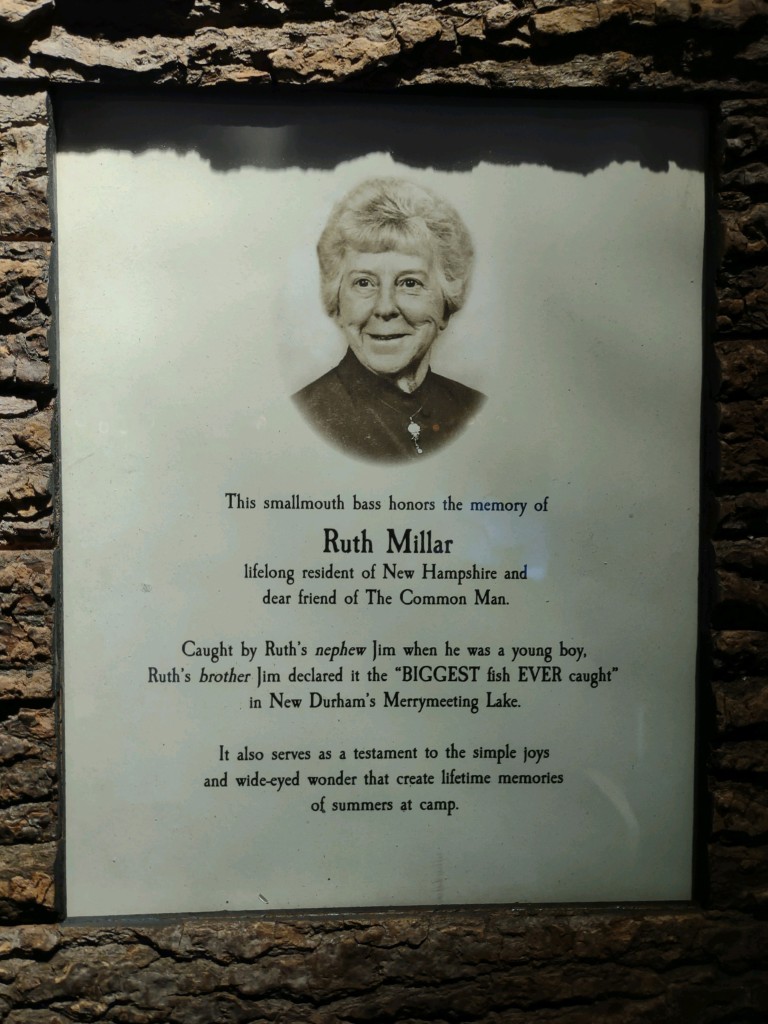 Now that you have read this tale, you realize that Merrymeeting Lake wasn’t really created because someone left the water running. You can’t, as Uncle Jim encouraged us to do, dangle over the side of the boat at the deepest point in the middle of the lake, stare into the crystal-clear water and hope to find a chimney. Freddie was a character in the imagination only and perhaps, just perhaps, the smallmouth bass Jim caught on that August afternoon wasn’t the BIGGEST fish EVER caught in Merrymeeting Lake. In Uncle Jim’s words: “Living here by the lake, with an encroaching forest just behind us, you get a new perspective. All about you are the lake and forest creatures you know as presences, which represent the meaning and all the magical possibility of life. … Last night a hermit thrush sang, once again, its lovely evensong. A cadence of pure joy, addressing itself to the slowly setting sun. A song no human voice, or instrument, could ever aspire to emulate. And we listened, enthralled and enraptured to the haunting refrain.”

Those years at camp? It wasn’t really about the fishing, swimming or even snitching Aunt Barbie’s butterscotch brownies. Through Uncle Jim’s stories, which remain in the memory of all of those who knew and loved him, we learned how to dream and imagine.

The greatest gift of all.