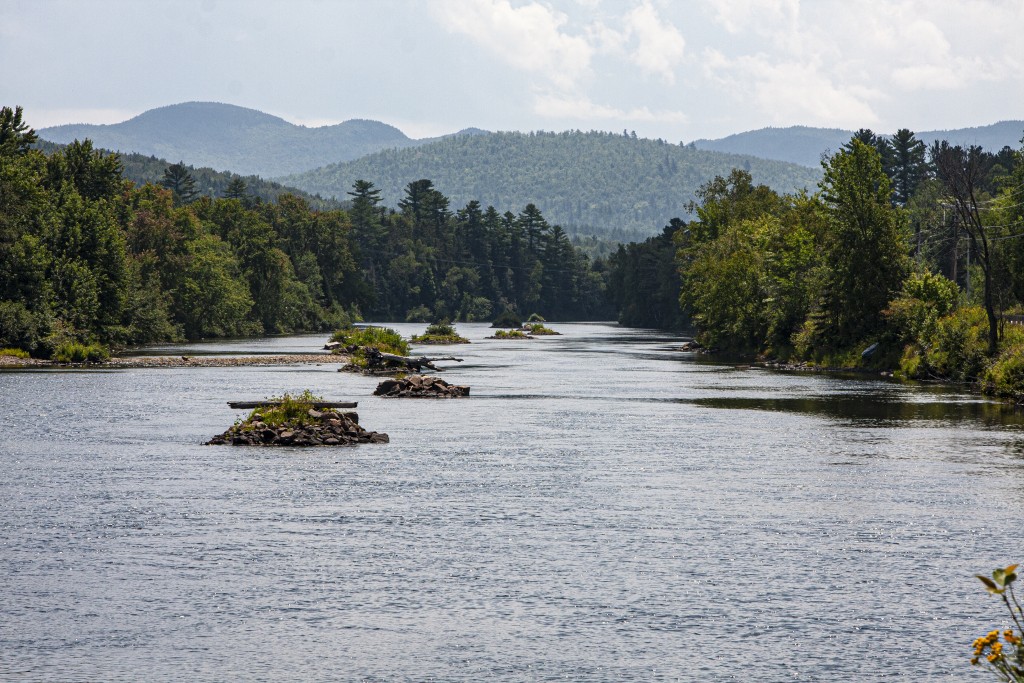 Log drive boom piers in the Androscoggin River are the only reminders of the log drives, when thousands of huge tree trunks ran downriver. Photography by Stillman Rogers

Long before Europeans explored the Upper Androscoggin River, Eastern Abenaki used it as a highway, camping in what is now Berlin to mine an important resource. At the crest of Mount Jasper, which rises sharply behind the center of Berlin, the Abenaki discovered rhyolite, a fine-grained igneous rock that could be flaked into hard, sharp points for arrows and spears.

A series of shallow pits along bands of rhyolite atop Mount Jasper are among the very few documented Native American mining sites in the Eastern United States. Stone tools and finished projectile points discovered near the mine and at campsites along the Androscoggin are displayed at the Berlin Public Library on Main Street. These are labeled, and a brochure offers more details about the artifacts and the mine.

Land for the town of Maynesborough was granted by Colonial governor John Wentworth, but the claims were never taken up. It wasn’t until 1823 that settlers came to establish farms, reincorporating it as Berlin in 1829.

Set alongside a river amid miles of virgin forest, logging and wood industries were more productive than farming. The falls of the Androscoggin provided power for mills, and the raw material was all around them. In 1851, the railroad arrived, connecting Berlin to markets, and soon thereafter H. Winslow & Company built a large sawmill at the falls.

In 1868, William Wentworth Brown and Lewis T. Brown bought the mill and its timber and water rights, changing the name to the Berlin Mills Company. The arrival of the Boston and Maine Railroad opened even more markets, and by the early 20th century, several pulp and paper mills were active in Berlin. 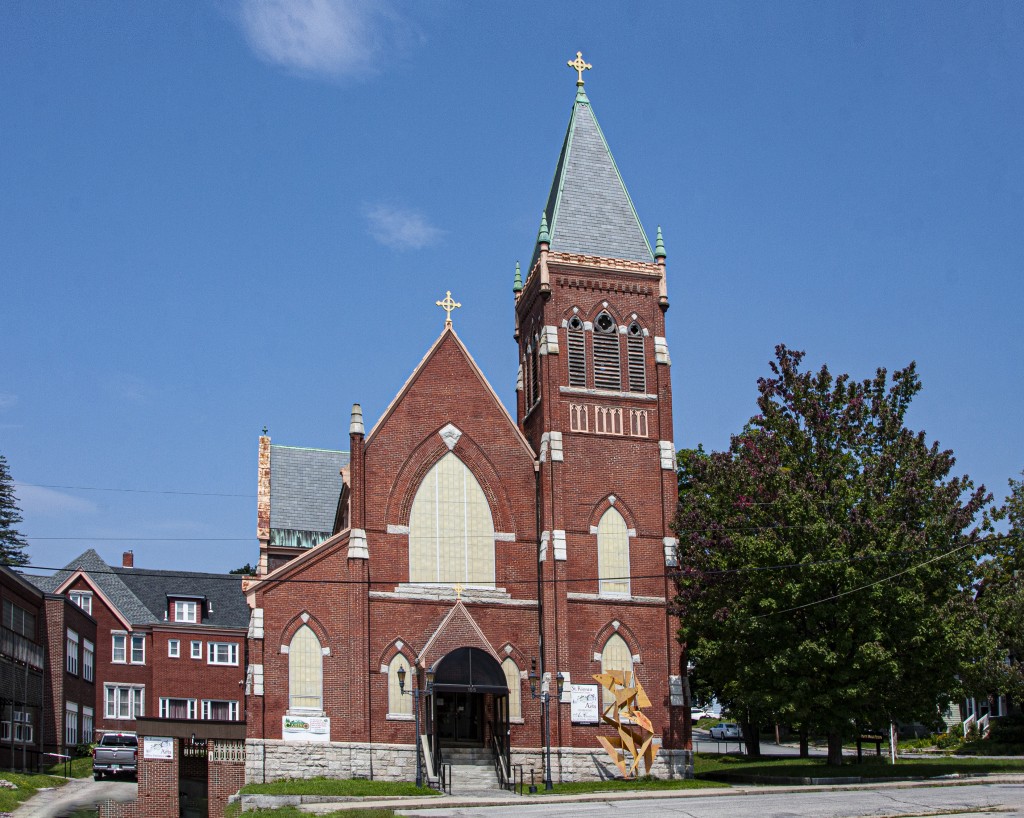 The St. Kieran Community Center for the Arts is a visual and performing arts center and cultural hub. Photography by Stillman Rogers

The Berlin Mills, the biggest and the major employer, changed its name to the Brown Company because of anti-German sentiment during World War I. Brown Company survived the Depression and World War II, although barely, and changed hands repeatedly before the last owner, Fraser Papers, closed the mills entirely in 2006, displacing 250 employees.

At its height, the Brown Company owned more than three million acres of Quebec woodlands and more throughout the East, employing more than 9,000 men to operate the mills and cut the timber that supplied them. During the winter, men at logging camps deep in the woods cut timber that was floated down the river on the spring runoff. Today, only the boom piers that stand out as tiny islands along the river’s center are reminders of the log drives, when thousands of huge tree trunks tossed and tumbled on its roiling surface.

The 1853 Brown House, which was the company’s nerve center, overlooks the river on Main Street, now housing the Androscoggin Valley Chamber of Commerce. Across the street, paintings created by Plymouth State University students decorate the windows of the company’s former research and development building.

Mills and their logging operations are responsible for Berlin’s unique and diverse population mix. The industry needed labor, and workers came from as far as Russia, Italy, Germany and Scandinavia, each forming a little community of people who shared the same language and customs. The majority came from neighboring Quebec; more than half the city’s population was French-speaking, and at the turn of the 21st century, two-thirds of the population claimed French heritage.

Berlin’s churches tell the story of these immigrant populations. In the center of the city, you can’t miss the towering brick St. Anne’s Church, built by French-Canadians in 1901, replacing an earlier one. The exuberant interior is a surprise, with its Italian Baroque style and decoration.

St. Kieran’s, the Irish church, was completed in 1895. The story goes that the Irish who lived nearby had been attending the previous St. Anne’s, but were clearly unwelcome, so they decided to build a bigger church than the French — who in turn built the current St. Anne’s six years later.

You have to look a little harder to find the golden, onion-shaped domes of Holy Resurrection Orthodox Church glittering in the sunlight. High on steep Petrograd Street, it was founded in 1915 by Berlin’s large Russian community and is one of the last Russian Orthodox churches with a charter granted by Tsar Nicholas II before the fall of the Russian Empire. The church houses two reliquary icons.

The Northern Forest Heritage Park in Berlin used to have a cultural festival that celebrated some of the ethnic groups. Sadly, this historical center has now closed, and its collections of artifacts were given to the Berlin & Coös County Historical Society’s Moffett House Museum and Genealogy Center.

The museum is in the 14-room Victorian home and office of Dr. Irving Moffett, who practiced medicine from 1932 to 1993. His downstairs clinic rooms are filled with the most innovative equipment of the time. Some of it is quite surprising, such as a 1930s device for photographing inside a stomach.

Raymond Daigle’s tour of the museum was filled with interesting anecdotes and history. He pointed out, for example, a 1924 prescription for a tonic with instructions to be taken daily; the label is on a fifth of whiskey, available only by doctor’s orders during Prohibition.

Moffett’s home is packed with memorabilia from Berlin’s history, one of the most complete and well-labeled local historical museums we’ve seen in our years of exploring the state. From White Mountain souvenirs and World War II ration books to uniforms from every conflict since the Spanish American War, the museum pro-vides fascinating glimpses into life in a North Country town for the past century.

A poignant reminder of Berlin’s economic fortunes is a sheet of pulp paper turned out on the last day of the mill’s operation, April 23, 2006, signed by the last employees. Upstairs is the most complete genealogical research center north of Manchester. 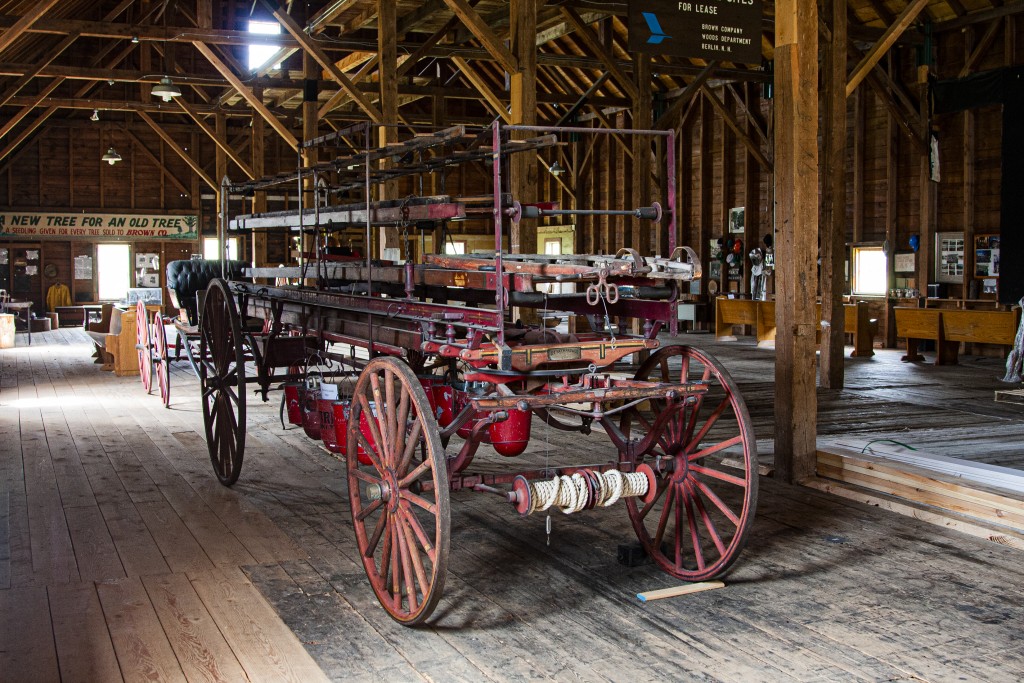 Halvorson’s most lasting memorial, however, is north of town, at the Milan/Berlin town line. Under Halvorson’s leadership, in 1935, the Nansen Ski Club built the 171-foot-high Nansen Ski Jump, for half a century the largest in North America. Recently restored and readied for competitions, it’s on the National Register of Historic Places.

The Historical Society owns the restored Brown Company Barns, the last remains of the company’s logging operations. W.R. Brown, son of the company’s co-founder, raised Arabian horses, which he stabled in one of the barns; the other was used for periodic rests for the draft horses that moved timber in the logging camps.

You can find Daigle at the barns most mornings from 7 to 11, where he oversees a perpetual barn sale of contributed items the museum can’t use. Why is he there at 7 a.m.?

“I tell people I’m there to let the horses out,” he laughs, “but maybe I am letting out their spirits.”