The beach at Wellington State Park in Bristol.

We hear a lot about towns reinventing themselves, but Bristol didn’t need to reinvent anything — it was all there in plain sight. The town’s revitalization plan simply takes full advantage of what they already have.

A rich legacy of architecture in a compact downtown, with the visual bonus of a river rushing through and plummeting over a dam, was a canvas that only needed a little touch-up. Add the natural attractions of Newfound Lake, three rivers and a protected forest almost in the center of town, and Bristol had a lot to work with.

All it took to pull those together into a successful revitalization plan was some serious community engagement. The results are apparent the minute you drive into Central Square, which is listed on the National Register of Historic Places. The old mills and mercantile buildings hold shops, restaurants, an antiques store, a fudge shop, a brewery and a café that doubles as a jazz club.

The mills were at the heart of Bristol’s history. Originally part of the Mason grant, which covered most of southern New Hampshire, 30,000 acres to the west of the Pemigewasset River were purchased in 1753 by a group from Chester, England. They named it New Chester, and in 1788 it was divided to create Bridgewater, then divided again in 1819 to carve the town of Bristol from the northern section.

The new town’s location where the Newfound River flows into the Pemigewasset gave it both water power for mills and access to river transport for finished goods. The riverbanks, along with providing fertile farmland to support the early settlers, yielded a high-quality clay used in making fine china, pottery and reddish-brown bricks. The clay was similar to that used to create bricks in Bristol, England, hence the name of the new town.

Mills along the Newfound River manufactured paper, woolens, furniture and other wood products among additional goods, as well as powering tanneries for leather. At one time, more than 20 industries flourished along its banks.

When the railroad was extended from Franklin in 1848, it brought summer visitors to Bristol’s other important water resource, Newfound Lake. Farmers welcomed guests at first, and by the 1870s, several hotels had been built; in the 1920s, a bungalow village of cottages was added.

With the increasing prosperity brought by the mills and tourism, Bristol flourished with the fine homes and commercial buildings that form today’s Historic District and residential neighborhoods. Within a few blocks are good examples of a dozen different styles of American architecture, from Greek Revival to 20th century.

Stroll around Central Square and along Summer, School, and North and South Main streets to find Georgian, Federal, Victorian, Greek Revival, Neoclassical, Second Empire, Gothic, Queen Anne and other styles. Fifteen of the homes and commercial buildings are on the National Register, two more on the state register and a dozen more have been identified as significant on a local register.

In addition to those, the 1884 Minot-Sleeper Library and the 1890 Queen Anne United Methodist Church are listed properties, as are the 1849 town hall and 1889 fire station. While the preservation of Bristol’s architectural assets has been the prime concern of the Historic District Commission, other groups have worked to revitalize the contemporary community. 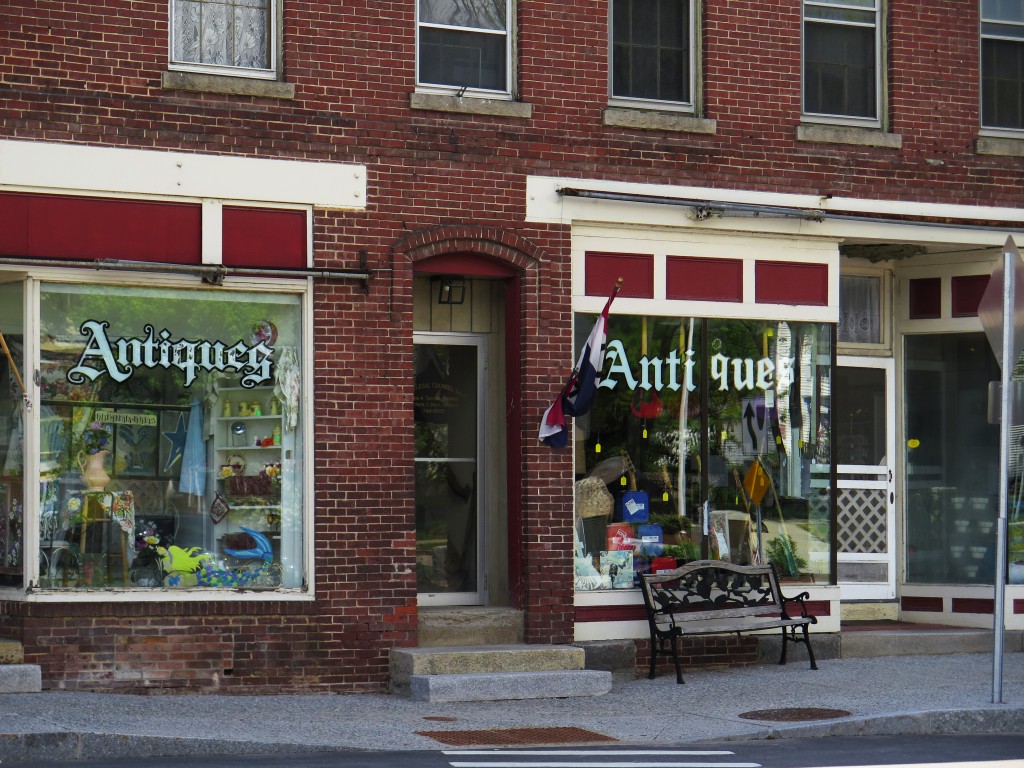 A treasure trove of antiques awaits visitors to Bristol’s downtown.

Along with its architectural heritage, Bristol’s revitalization plan has also focused on enhancing its natural assets with parks and walking and bike trails. The Bristol Falls Park is an attractive riverside area, the beginning of a path that follows the Pemigewasset River from downtown to the Smith River. A picnic park has been added at Profile Falls, where the Smith River cascades 30 feet over ledges into a popular swimming area.

That park has access to several walking and bike trails, and more trails are in the Slim Baker Conservation Area, close to downtown. One leads to Inspiration Point, with views of Mt. Cardigan and Tenney Mountain. The Bristol shore of Newfound Lake, which includes Wellington State Park, is filled with watersport options, and the park has a beautiful sand swimming beach.

Overlooking the lake, the Newfound Lake Inn was among the first to welcome travelers, even before the railroad brought tourists. Built in 1840 as a stagecoach stop on the road to Montreal, it has been updated with each new generation of owners and offers a private swimming beach, kayaks, sunset views and a fine-dining restaurant (crab-stuffed baked scallops are a specialty).

Not as old as the inn, but another longtime favorite dining spot is closer to downtown — Kathleen’s Irish Pub, serving traditional Irish dishes with perfect pints to the tunes of live Irish music. Around the square are more dining and drinking places that have been attracted by the investments made in Bristol’s revitalization, joining breakfast and lunch favorites, the Bristol Diner and Gina’s Place.

Opposite Shackett’s is The Purple Pit Coffee Lounge, with a full coffee menu, smoothies, breakfast and lunch choices, and an ice cream parlor. In the back lounge is a jazz club with live performances. Next to Shackett’s, in a riverside gristmill dating from the 1700s, is The Mill Fudge Factory, makers of handcrafted, small-batch fudge from an old Scottish family recipe.

It took a lot of community engagement to bring this new vigor to Bristol, making the most of its wealth of historic buildings and its beautiful natural setting to revitalize its downtown. And the result is worth visiting.