A Weekend Getaway in Lyme

Take in the beautiful restaurants, museums and inns in Lyme this winter 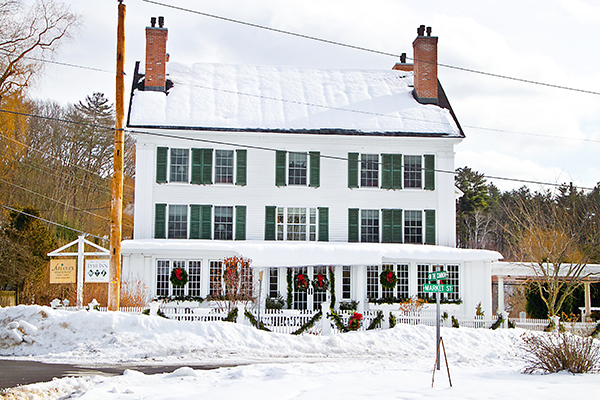 The Lyme Inn is ideal for a cozy getaway. Photo by Stillman Rogers

We’ve driven through Lyme for years, each time commenting on the pretty village around its green, and on the long line of horse sheds behind the white church. But we never stopped to spend any time there until we learned that Chef Martin Murphy had moved Ariana’s Restaurant into The Lyme Inn. It was all the reason we needed to book a room.

Dinner was well worth traveling for. The extent of the menu surprised us; instead of the expected two or three daily specials, we found as many options there as on the regular menu, evenly split between small and large plates. The specials menu, which changes four times a week, is printed instead of recited — an innovation we applaud.

The chef is especially known for seafood, which is flown in daily, and for using beef and veal from local farms. The night we dined there we had the choice of Portuguese seafood stew, seared scallops, a fish tartare trio, mussels in lemongrass and curried shrimp, along with more than a dozen other dishes. I especially liked the option of selecting two small plates (although they weren’t so small). 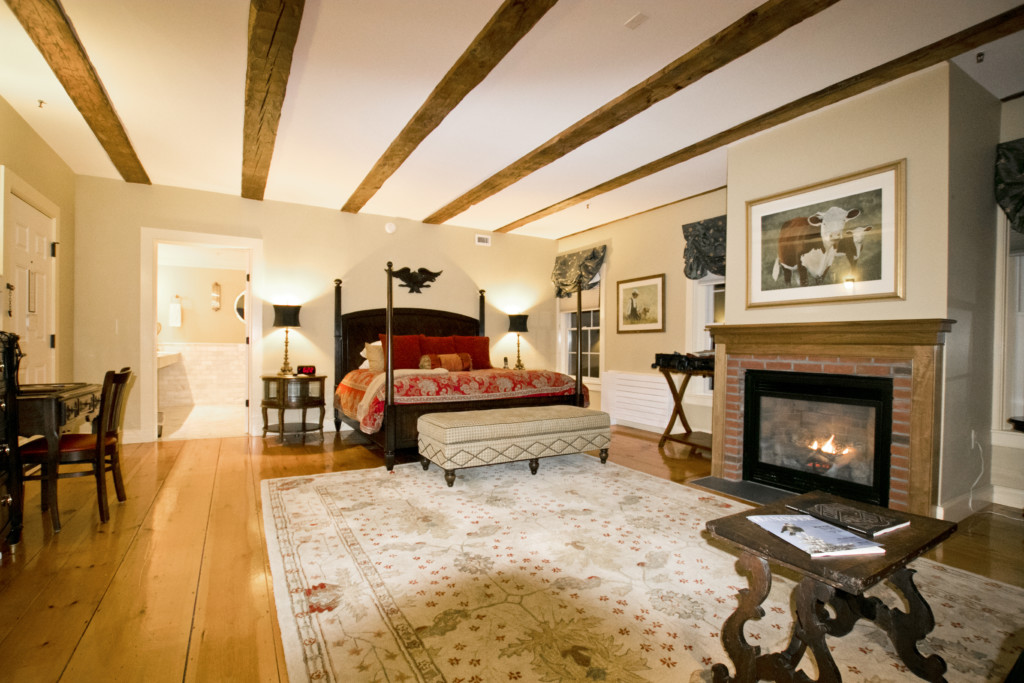 One of the beautiful, expansive suites at The Lyme Inn. Photo by Stillman Rogers

I began with tiny shrimp in a savory Thai broth with ginger and a touch chili — so good I considered repeating it for my second small plate. But I would have missed the meltingly tender braised beef brisket served with grits in a rich reduction that echoed the deep flavor of the beef. We were tempted by the description of a gingerbread upside-down cake with caramelized pears, but chose a lighter blackberry-cabernet sorbet.

The Lyme Inn strikes the delicate balance of historic warmth and contemporary luxuries, maintaining the spirit of the centuries-old inn it is, but without the creaky floorboards. Our large room overlooking the common had a comfortable sitting area beside a fireplace, wide-board floors and hewn beams, a marble bath with a deep double tub and walk-in shower. Built in 1809, the building was always used as an inn, and was a center for community activities and Grange meetings in the 19th century.

In the morning, Ariana’s morphs into a bright breakfast room with views across the village. A huge bowl of fresh berries, granola, warm poppy-seed scones and a hot egg dish served with smoky bacon sent us off into the winter morning to admire the homes around the common. Several of these date to the 1700s; most were built before the Civil War.

The long Lyme Common held a skating rink, along with a Civil War monument and a cannon, purchased in a Boston junkyard and brought to Lyme in about 1850. It was fired on patriotic occasions until residents got tired of replacing broken windows and demanded its removal. It was hidden and lost for years until discovered and returned (in non-firing condition) in 1955. We learned this (and that the common used to have two flagpoles, one for Democrats and one for Republicans) from the detailed listing of historic buildings and monuments compiled by Lyme’s Heritage Commission.

The focal point of Lyme Common is the white clapboard Congregational Church, which was built from 1808 to 1811 in classic Federal style. The church looks almost exactly as it always has, except that the dome was sheathed in gold leaf until painted black during World War II.

At the head of the common, behind the church, stretches New England’s longest row of attached horse sheds, 27 in all, used when owners came to church and whenever they were in the village. Beside them, a tiny building with a single barred window was built as the town’s jail, later used for what was called a tramp house, sheltering hobos and itinerants looking for farm work.

To our surprise, we found the Lyme History Museum open on Saturday morning, even in mid-winter. Lyme has a long-standing regard for preserving its history, and the Lyme historians recently moved the collections to the Churchill-Melvin House, facing the common. Five exhibit rooms explore local themes and tell the story of the house itself, built as a law office and later expanded into a Victorian home.

Also unlike many town museums, Lyme’s has changing curated exhibits, and the current one explores the many ways locals once enjoyed winter. Strap-on ice skates, a traverse sled, a 1914 homemade sleeping bag and a sled made from a single barrel stave are highlights. The parlor is restored to the Victorian period and features a working Estey organ. Old kitchen utensils are displayed as a hands-on guessing game with the signs turned over — a neat way to draw kids (and adults) into the collection. 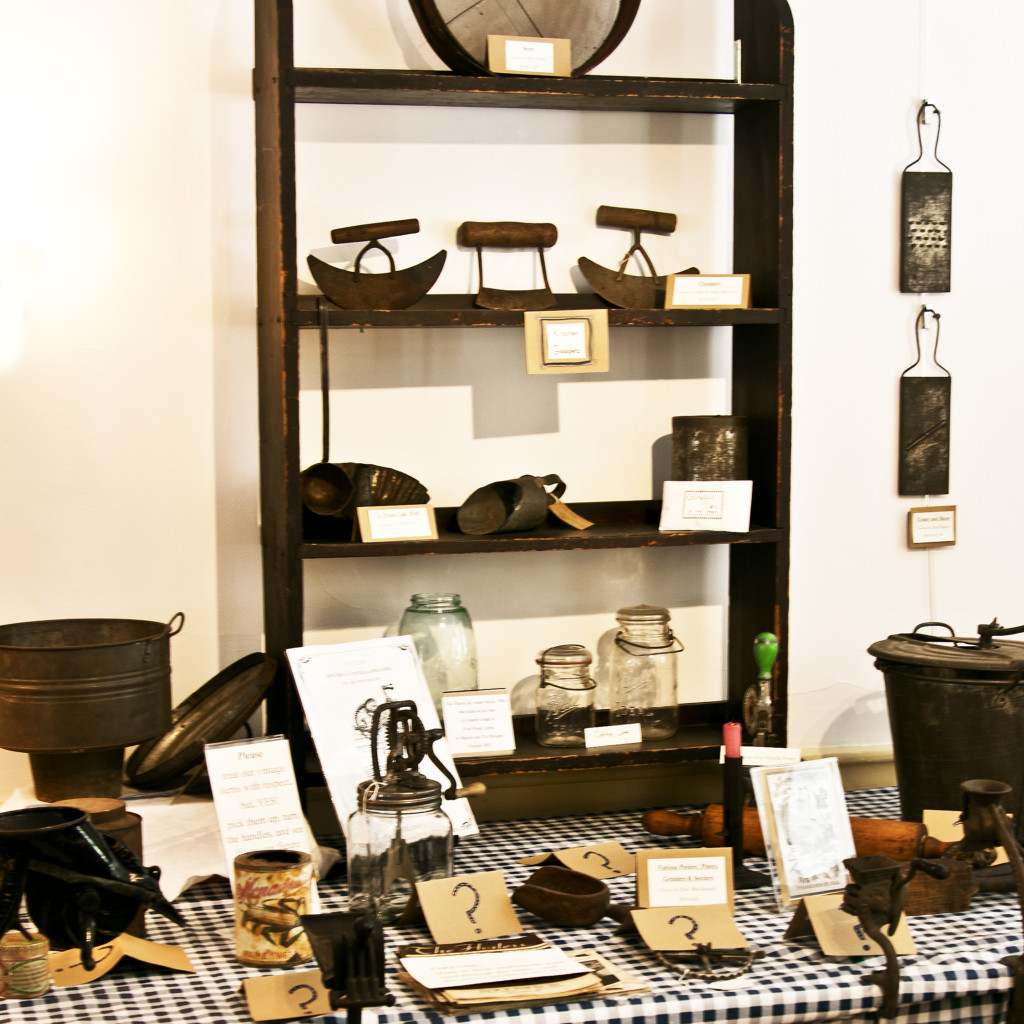 Lyme Historians has undertaken a Cellar Hole Project to locate and document abandoned farm sites. Chartered in 1761, Lyme was settled by homesteaders who came to farm the rich Connecticut River floodplain. Farming and timbering cleared 85 percent of the land, which soon became pasture for Merino sheep. At the height of New England’s wool boom, Lyme had a sheep population of more than 13,000, making it one of New England’s largest wool-producing towns.

As the boom waned and hill farms were abandoned, pastures that once covered Lyme’s hillsides were reclaimed by forest. Today’s farms are mostly located in the riverside plain, and produce beef, dairy products, Christmas trees, maple syrup and turkeys; Lyme native Dan Baily and his wife Millie do a brisk business each November, selling as many as 500 free-range turkeys raised on their farm.

We knew about (and have skied) the Dartmouth Skiway, hidden in the hills behind the inn, but innkeeper Jack Elliott told us about an unusual cross-country ski area at Green Woodlands. Not only is skiing on the 50 kilometers of dual groomed trails free, but so are the loaner skis and the hot cocoa in the warming huts. “The only payment expected is a smile,” Elliott told us. Connecting with nature is what Green Woodlands is all about, and the 35-square-mile wilderness area is cut with trails for snowmobiles, mountain bikes, horseback riding, hiking, snowshoeing and skiing.