A Trip to Claremont for the Smokehouse and Architecture 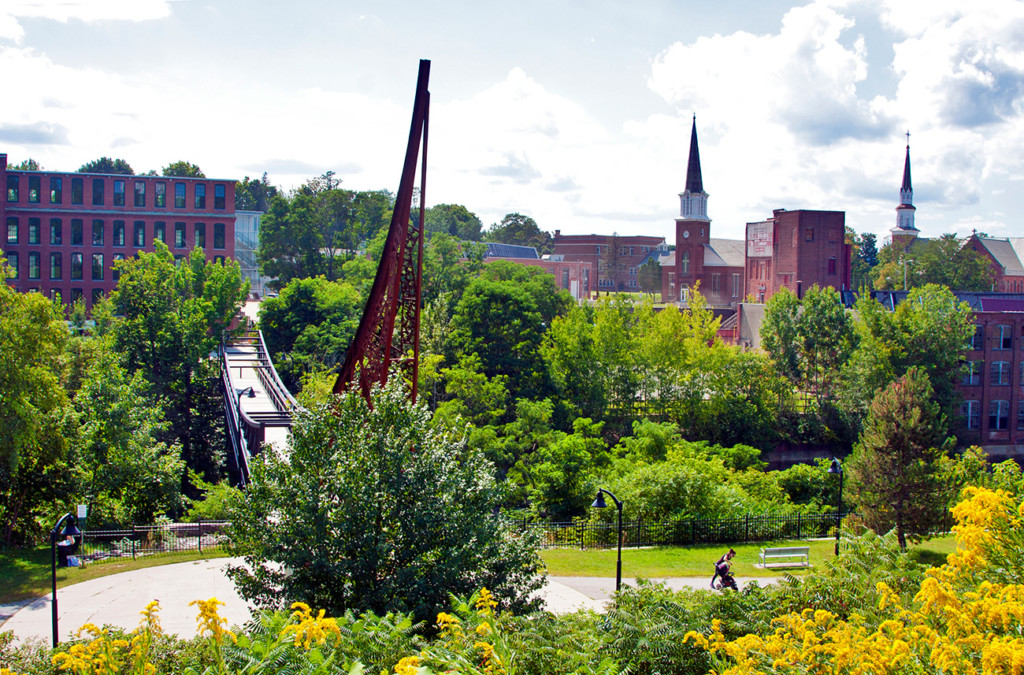 The 53-foot “ourhandsthenandnow” sculpture by Ernest Montenegro was commissioned for the city’s 250th anniversary.

It was kielbasa that took us to Claremont. The best kielbasa we’ve ever tasted. We had tracked down its source and discovered it wasn’t far from home, and that we could buy direct from the maker, North Country Smokehouse, if we ordered it ahead.

When the smokehouse merged with its meat supplier in 2015, the stipulation was that the whole operation would remain in Claremont. The result was the state-of-the-art sustainable plant where we picked up our sausage. The smokehouse is a long way from the horse-drawn wagon from which founder and smoke master Mike Satzow’s grandfather sold smoked meats 100 years ago. But Mike’s ethic is the same: traditional European low-and-slow smoking on local hardwood embers, using all-natural, humanely raised and organic pork. 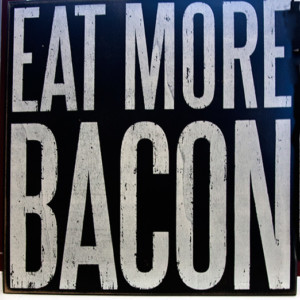 Along with the phenomenal kielbasa that brought us there, North Country Smokehouse produces bacon, breakfast and dinner sausages, pepperoni, Canadian bacon, smoked Montreal beef brisket, smoked turkey, duck and chicken and pork loin. They also smoke cheeses: mozzarella, cheddar, Swiss and provolone. There’s no retail sales room at the smokehouse, but on Fridays customers can pick up orders made by noon the previous day. You can order through the website, by phone, email — or send a smoke signal.

Of course, while we were in Claremont, we stayed to look around a bit. We began at the visitor center, high on the riverbank opposite the impressive complex of brick mill buildings that line the Sugar River in the center of town. There we picked up a Connecticut River Heritage Trail guide, designed “for the historically and architecturally minded” — in other words, for us.

The guide walked us through the highlights of the Downtown Historic District, which is listed on the National Register. Nineteenth-century brick mercantile buildings surround the sloping oval of Tremont Square, punctuated on the uphill end by the imposing city hall and the Claremont Opera House. This Renaissance Revival brick structure was designed by architect Charles A. Rich, who was also responsible for several Dartmouth College buildings and for Theodore Roosevelt’s home at Oyster Bay, New York. The Opera House on the second floor has been beautifully restored and is used for performances and concerts.

At the opposite end of the oval, the 1930s Tumble Inn Diner still has its original booths. The mills that accounted for Claremont’s early prosperity and growth still line the river that powered them, stretching along Water Street and beyond. These have been largely revitalized and repurposed; one complex overlooking the Sugar River Falls now houses The Common Man Inn and Restaurant. 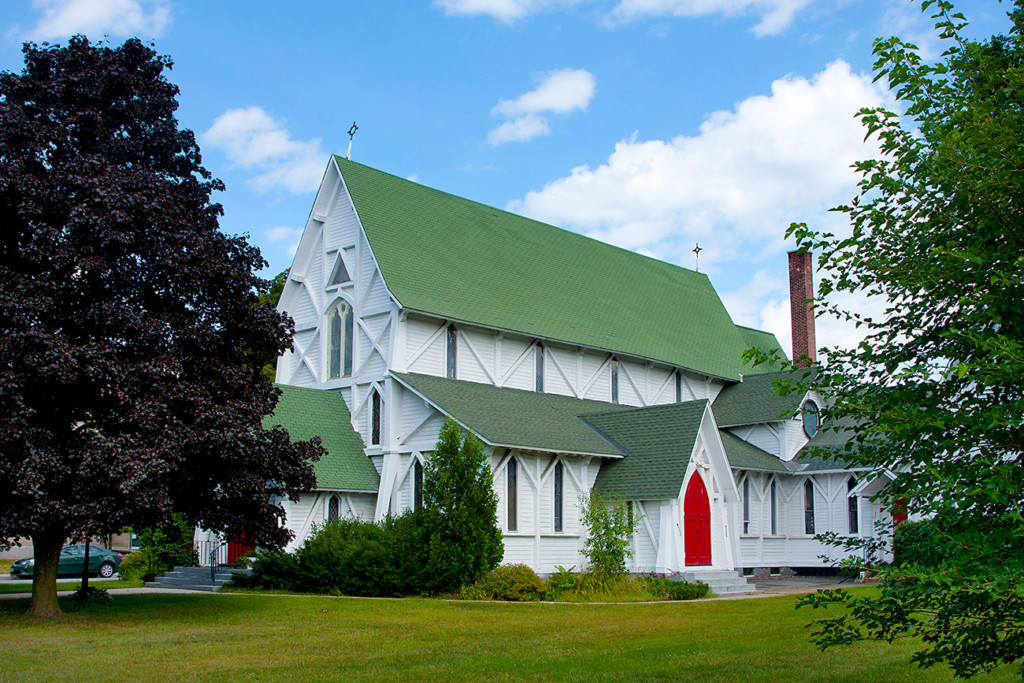 Trinity Episcopal Church in Claremont is an example of Gothic Revival architecture.

The Victorian St. Mary’s Church sits near the river at the end of the mill district, one of a number of interesting churches in Claremont. These represent several different styles of architecture, from the Gothic Revival First Congregational Church with its unusual crenelated tower to Trinity Episcopal Church, one of the state’s best examples of stick-style.

The churches also tell a lot about the history of Claremont. None tells more about the city’s early immigrants and mill workers — and none appears as more of a surprise — than Holy Resurrection Orthodox Church, at the corner of Union and Sullivan streets. Russian immigrants arrived here around the turn of the 20th century, working at the Sullivan Machinery Company and other mills. In 1909 they organized a Russian Orthodox parish, with supply priests from other places.

Five years later, a regular priest arrived and the congregation purchased a building that served as a combination church and rectory. The church we see today, a traditional-style wooden structure with seven onion-shaped cupolas topped by crosses, was inaugurated in 1941. Stained glass was added in the 1950s, and in the 1980s, the interior was renovated, with a new iconostasis in traditional chip-carving; embroidered and painted icons were added in the late 1980s. In 2009 the interior was renovated and the current beautiful natural wood-paneled ceiling was installed. Three weekly services prove that the church is still an active one today.

Another pair of churches face one another a few miles out of town in West Claremont, each a historic landmark with an interesting story.

Union Church is the state’s oldest standing Episcopal church building, dating from 1773. It is also the state’s oldest structure built specifically for religious purposes (in contrast to Congregational meeting houses from the same era that were also designed for secular public gatherings). Union Church was named for the planned union of the Congregational and Episcopal churches in West Claremont under a single minister. That never happened, but the former Congregational minister, the Rev. Daniel Barber, became rector of the Union Episcopal Church.

Meanwhile, his son Virgil, also ordained in the Episcopal Church, converted to Catholicism to become a priest. In 1823 he founded a parish and built St. Mary’s Church, the first Roman Catholic Church in New Hampshire, across the street. Together, the father and son conducted a school for the children of West Claremont mill workers on the second floor of St. Mary’s. Union Church is still an active parish with Sunday morning services; St Mary’s is home to performances and concerts of the West Claremont Center for Music and the Arts.

From Routes 103/12 heading west from downtown, take a left on Plains Road to the roadside historical marker for Union Church, at Old Plains Burying Ground. Take a left through the cemetery to find the two churches.