A Guide to Hancock’s Small-Town Charm

Soak up the history of this sweet town 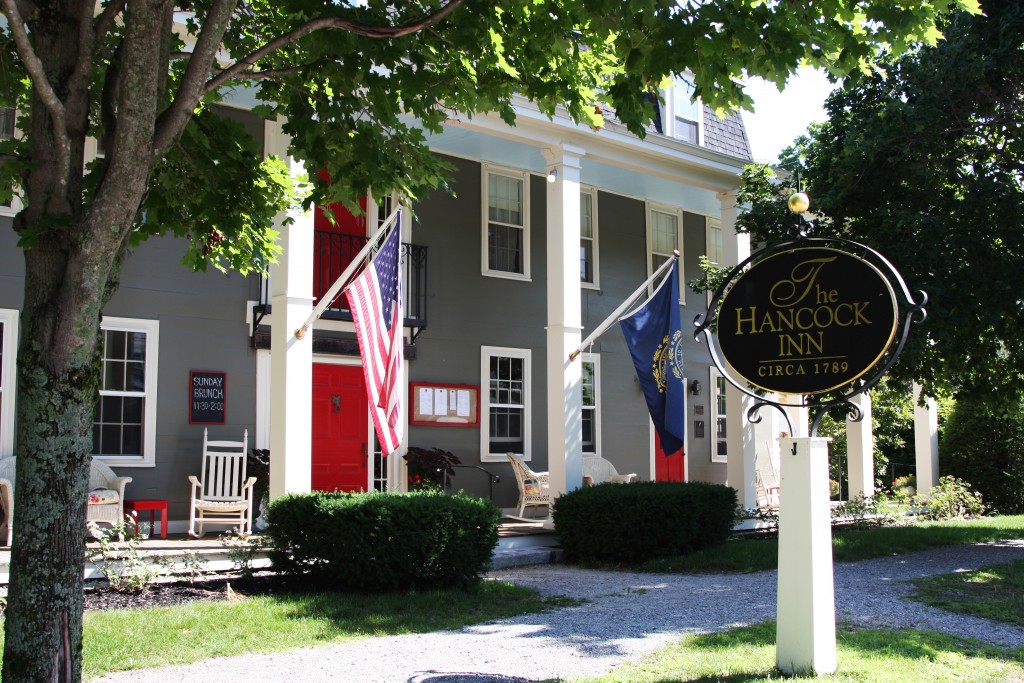 Originally a tavern built circa 1789, the Hancock Inn is full of history, including 19th-century murals and stencil art. Photo by Stillman Rogers

We love browsing through the original 1938 WPA Federal Writers’ Project guide to New Hampshire, a somewhat idiosyncratic encyclopedia of our home state, for the history and for the wonderful tidbits of local lore it shares. Case in point: “Right from Hancock on Stoddard Rd., is ‘Hooter’ Farm, 2.5 mi., where a former officer in the Imperial Guard of the Czar of Russia raises turkeys.’ Who knew?

In 1938, Hancock was described as “an old-fashioned community,” where “it would not seem incongruous to see a stagecoach come down the highway and stop at the tavern as it did a century ago.” The tavern — now the Hancock Inn & Fox Tavern — is still the landmark in the village center, with its wide porch and rockers facing Maine Street. A Concord Coach laden with travelers still wouldn’t look out of place in front of the inn.

First settled in 1764, the town didn’t have enough population to incorporate until 1799, when it was named for John Hancock, who owned about 1,000 acres of land here. Difficult as it is to picture now, it became a manufacturing center, at one time producing nearly half the cotton made in the state. In the early 1800s, rifles were manufactured here, but by the end of the century more than 60 family farms were the economic base.

The railroad came in 1888, and Hancock’s Elmwood Station was the crossing point of two lines, the Manchester & Keene Railroad and the Peterborough & Hillsborough Railroad. This made it easier for farmers to get their produce to city markets, and it also brought the first tourists seeking fresh country air and cooling summer breezes. The rail lines were closed after the hurricane of 1936 washed out several segments of track, but the visitors kept coming, many buying summer homes.

Several taverns served the carriage trade, and one of them, a four-chimney brick structure built in 1800, is now the Hancock Historical Society, housing a museum with antique furniture, household goods, textiles and a large tool collection.

Another that served the carriage trade is The Hancock Inn, built circa 1789, making it the state’s oldest continuously operating inn. It opened a decade before the town was incorporated, providing meals and — unlike the others — accommodations to travelers. The inn passed in ownership to a state senator, who made it a social center, hosting a distinguished clientele that included then-U.S. Sen. Franklin Pierce. The railroad brought more guests, and the inn hosted gala balls in its second-floor ballroom.

In 1915, as new owners were renovating the inn, they discovered early 19th-century murals by the famous itinerant painter Rufus Porter, and later work by stencil artist Moses Eaton Jr. Eaton was a local boy, born in Hancock in 1796 (he later moved to Hancock Road in Harrisville, where his 1782 house is on the National Register of Historic Places).

Although wallpaper was being imported from France by the late 1700s, only the wealthy could afford it. Others seeking to add color and style to their rooms hired itinerants like Porter and Eaton to decorate their walls with stenciled scenes. Several guest rooms in the inn are decorated with Eaton’s and Porter’s stylized stenciled landscapes.

The inn’s restaurant, Fox Tavern, serves three-course, prix-fixe dinners with a changing menu based on seasonal ingredients. Ice cream is made in-house, as is the inn’s signature blackberry cabernet sorbet. 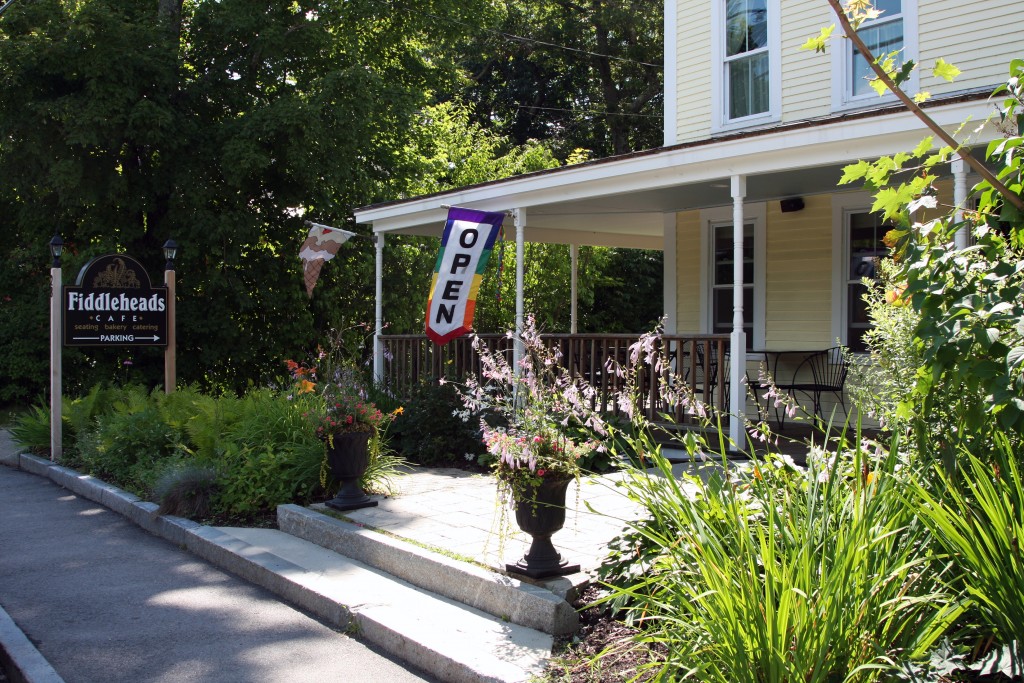 The inn is only one of the fine buildings that make up Hancock’s Village Historic District. Most prominent of them is the Hancock Meetinghouse and First Congregational Church, which share the same distinguished building, as they have since 1820. On October 28, 1819, Hancock’s first meetinghouse was destroyed by fire, and the town immediately set about replacing it.

Because the town needed both a church and meetinghouse, it was agreed that the two would share the building; the town could use it and the church would sell pews at a public auction. There was enough money left over from the sale of pews to purchase a bell from the workshop of Revere and Son. The bell was hung in the steeple in mid-October of 1820. The completed church was dedicated on October 25, three days short of a year from the destruction of the previous one.

One of New Hampshire’s finest Federal-style churches, Hancock’s is reputedly one of the most photographed in New England. The façade has three doors and a large Palladian window, and the square tower has an open-arched belfry where Paul Revere’s bell #236 still chimes hourly around the clock.

The meetinghouse is part of the group of distinguished and well-preserved 18th- and early 19th-century buildings around the common and along Main Street that comprise the Hancock Village Historic District, now on the National Register of Historic Places. These include the Vestry (formerly an academy building), the grange and a schoolhouse.

Between the church and the inn is one of our favorite stops in town: Main Street Cheese. The tiny honor-system shop sells fresh and aged goat cheeses, as well as goat meat and frozen prepared dishes, such as curries. Behind the shop is a garden where in the summer there are goat kids, part of the larger herd of Alpine goats on the farm outside the village.

Main Street Cheese recently stepped into the agritourism scene, offering overnight experiences that include daylong cheesemaking classes and workshops, dinner based on their products and lodging.

On the other side of Main Street are The Hancock Market and Fiddleheads Café, which serves bounteous made-to-order sandwiches, salads and fresh-baked breads, along with pies, cookies and other baked goods.

Norway Pond, behind the meetinghouse, has a boat ramp, but our favorite place to launch our kayaks is in the nearby 1,700-acre dePierrefeu–Willard Pond Wildlife Sanctuary, a pristine pond alive with birds, including loons. On the way in, we passed a 14-foot glacial boulder beside the road, and a walk along Tamposi Trail revealed half a dozen more, including a pair that form a cave.

Also off Route 123 is the Harris Center for Conservation Education, named not for the estate’s creator Dr. L. Vernon, but for the cat of his granddaughter Eleanor, who turned the land into a nature preserve. She made their stone house into the education center, and from the lower field below its terraced lawns, a trail leads into the East Side trails. Dandelyon Trail leads to Boulder Loop, whose name should tell you it would be the one we’d follow. The highlights are Split Rock — a giant boulder cleaved in half — and a balanced rock with an overhang you can walk under.

Hancock has more than a fair share of beautiful kayaking waters: At Powder Mill Pond, you can paddle under the covered bridge and up the Contoocook River and the winding channels through its marshes; Nubanusit Lake has power boats, but there’s a short portage to the remote Spoonwood Pond.