A Glimpse at NH’s Logging History

I’m on the Pontook flowage up in Dummer headed south following the Androscoggin. The river is flowing freely now, but 100 years ago it would have been jammed with activity as log drivers floated their winter’s work downriver to the mills. Folklore says that during these spring log drives there were so many logs in the river you couldn’t throw a line in to fish, and you could walk across the river blindfolded on floating logs without getting your feet wet. Old photos seem to bear out these legends as having a kernel of truth to them.

The spring log drive was the final step in the process of timbering the remote areas of northern New Hampshire. During the winter, logging crews would move into their camps, chopping down trees until spring, and hauling the logs and pulpwood to the riverbank. Sometimes the logs were hauled to temporarily dammed brooks and streams that fed into the Androscoggin. When the ice thawed and water levels rose, the logs were rolled into the river and the drive commenced. Log drives typically began at ice-out, and the temporary dams would be breached, sending a massive wall of water and logs gushing into the river. River drivers would ride the logs, guiding them downriver to the mills. It was dangerous work — with water temperatures near freezing, a misstep could mean death.

As I follow the river, I’m noticing small rocky islands poking through the surface of the water. There are almost 100 of these rocky outposts up the center of the river, starting around the Milan-Dummer town line and ending 8 or 9 miles downriver at the dam in Berlin. At first glance, they look like ordinary rocky islands in the wide flat river, but with a closer look they are too perfectly aligned, and the spacing between them is too uniform to have occurred naturally. These islands are manmade. But why? And how?

The story of these little islands begins in the late 1800s. At that time, the banks of the Androscoggin were lined with mills that all required logs. These mills relied on the vast forests above Berlin to supply them with the logs they needed for the manufacturing of their products. Wood that was harvested from these forests and floated downstream during the annual spring drive was destined for one mill or another, and massive amounts of individual logs were driven downriver like herds of cattle.

All these logs, however, had different owners. With five or more companies using the Androscoggin River as a floating highway at the same time, the river became congested and logs intermingled. Keeping track of this wood was a major concern for all involved. Both the big and small companies needed easy access to their floating logs, and all had the legal right to use the river, so they needed to come up with a plan. They decided to construct a series of islands in the river, splitting it in two, and perhaps even thirds, near the mills. From one island to the next they would string logs chained together and anchor them to the island as a floating boom to further divide the river. These small islands thus took on the name “boom piers.” Once the boom piers were constructed, one of the two bigger mills would send its logs down the left lane and the other down the right. Small mills could also use these lanes. It was an attempt to organize the log highway.

Sorting gaps in the boom chain were provided in a few strategic locations. Timber choppers stamped the ends of the logs before rolling them into the river. Each timber company had its own end mark stamped onto the log with a stamping hammer. Obliterating or altering a timber mark was a crime not tolerated by the other loggers and mill owners. 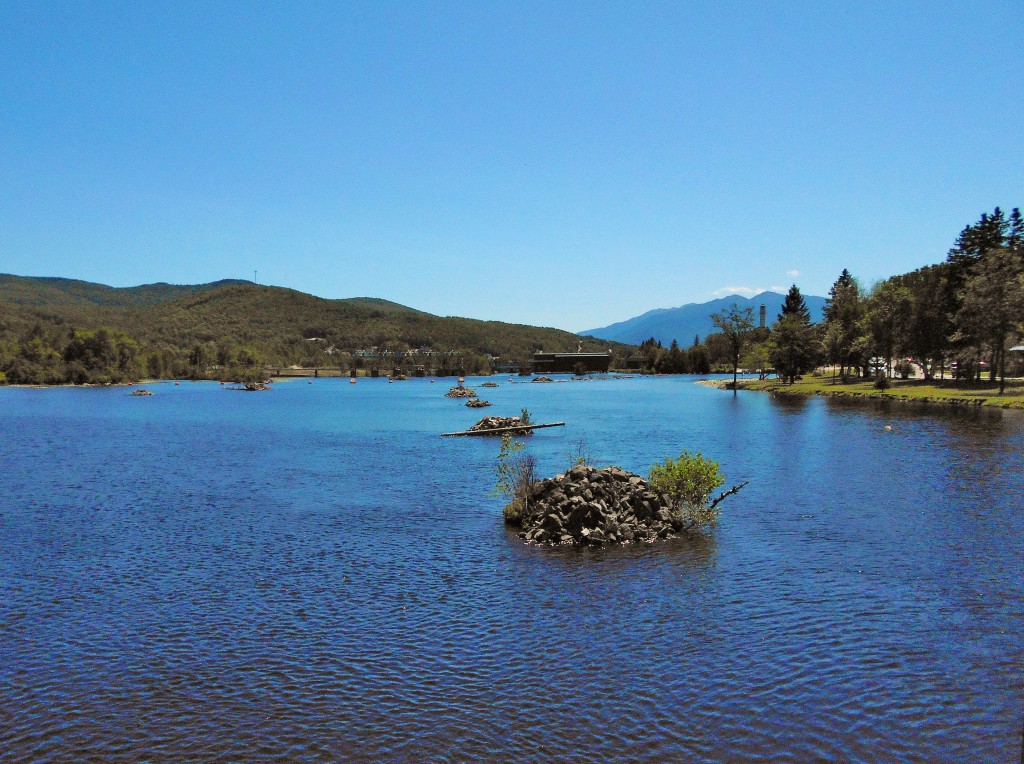 Built over 125 years ago, the remains of some of the Androscoggin River boom piers can still be seen poking up out of the water. Photo by Marshall Hudson

With a plan in place, the late 1890s saw the start of construction on these boom islands. They were built during the coldest part of the winter when the river ice was thickest. Square wooden cribs made of rot-resistant hemlock beams were built on the frozen river. Huge rocks were dragged out on sleds by teams of horses and lifted into the crib framework with block and tackle. The loaded cribs were then sunk by cutting away the ice beneath them. More hemlock framing and more large rocks were continuously added until the crib settled on the river bottom, and the newly created island reached its desired height and shape. This process continued throughout the winter until the river started to thaw and the ice became too thin to support the work.

In 1906, 49 additional piers were added so that two drives could come down the river and through the sorting boom at the same time. Repairs and maintenance to the boom piers was an annual winter chore as ice flows, erosion, deterioration and accidents damaged the rocks and timbers. It took many winters to complete, but when finished, these islands stood like a row of traffic cones spaced a few hundred feet apart, stretching northward away from the Berlin mills.

The smaller mills went out of business or were absorbed by the larger companies, and in 1917, the Berlin Mills Company became the Brown Company. Only the Brown Company and International Paper Mill were still using the boom islands to separate their wood in 1930 when the IP Mill closed its doors. The Brown Company continued to use these piers to hold and sort their wood from 1930 to 1964, but by the early 1960s, the economics of spring log drives floating wood down the river to mill shifted. Bigger trucks and better roads made truck transport more economical, safer and less seasonally restricted.

In November of 1964, the last of the logs were brought down the Androscoggin, meaning log drivers and boom islands were no longer needed. The boom islands were left to the elements, and without maintenance many of the hemlock frames rotted away. The rock centers remained sticking up above the water.  On some, enough dirt and organic matter has accumulated to allow scrawny trees to grow giving these rocky outposts the appearance of a natural island, almost.

The days of the log drive down the river are now lost forever and are not likely to be seen again, but these old boom islands serve as a solid reminder of New Hampshire’s logging history and are a historical icon for traveling tourists to go see. The men that built these boom islands over 125 years ago did their work well, as the islands are still standing despite the toll taken by time and nature. Those men must have been tougher than I am. I wouldn’t want to be out on a frozen river in the dead of winter with a team of horses hauling boulders to dump into a hole the ice. Not exactly a work-from-home occupation.