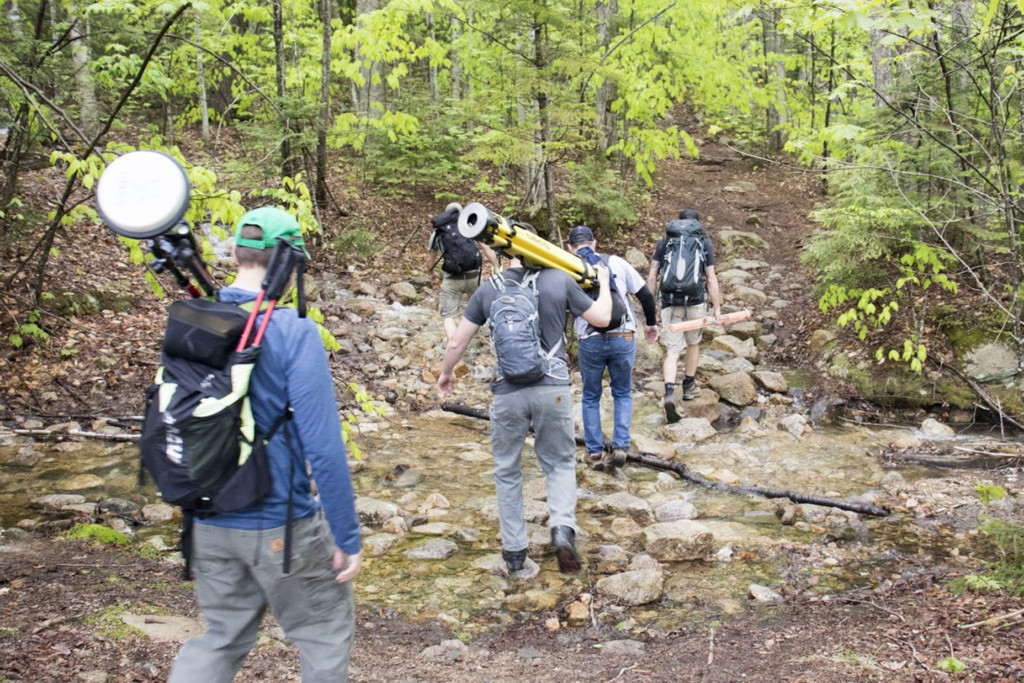 I’m on the top of a mountain and smack in the middle of a controversy. Just exactly how tall is Mt. Tecumseh? The Appalachian Mountain Club (AMC) lists 48 New Hampshire mountains as over 4,000 feet in elevation. AMC “peak-baggers,” who climb all 48 mountains, earn bragging rights and a nifty little patch for their accomplishment. I did it, and have the nifty little patch to prove it. Mt. Tecumseh is one of the 48 mountains and is listed as having an elevation of 4,003 feet, which places it, just barely, onto the coveted 4,000-footer list.

But what if Mt. Tecumseh wasn’t really over 4,000 feet? Would AMC need to revise its list, rewrite the guidebooks, and erase Tecumseh off of the list? Would new peak-baggers only have to bag 47 mountains? Would there be two different guidebooks, two patches, and two different categories of mountain climbers — the old “48-ers” versus the new “47-ers”? Would I have to give my nifty little patch back? Just imagine the controversy a few feet of elevation could mean.

The AMC’s listed elevation likely comes from the USGS Quadrangle Map, which indicates the mountain peak as having an elevation of 4,003 feet. But, how did that elevation get onto the Quad Sheet? The answer is triangulation and a lot of mathematical calculations. In 1877, Elihu T. Quimby, a professor of mathematics at Dartmouth College, worked for the United States Coast Survey (USCS) on his summer breaks. Quimby had been appointed acting assistant in the US Coast Survey, and along with five other scientists, a few basic survey instruments, some low-tech devices, and a lot of mathematical computations, he created a triangulation network, both horizontal and vertical, all across New Hampshire.

Quimby’s calculation notebooks survive. For surveyors, history students and math geeks, his computations are almost magical, as he neatly and methodically measures angles from a known baseline elevation, converts degrees-minutes-seconds to decimal degrees, determines the sine, cosine and secants of the angles, and converts his numbers into logarithms, all without a calculator or computer. Quimby’s calculations are carried out many places beyond the decimal to achieve a high level of precision. By repeating the procedure multiple times from many different base stations, Quimby was then able to use those angle-side-angle triangle solution theorems (that tortured many a high school student) to determine the elevation of many of New Hampshire’s mountains with a high degree of accuracy.

Quimby calculated that Mt. Tecumseh was 4,003 feet above sea level and for some 142 years no one doubted his calculated peak height. Then came LiDAR. LiDAR, which stands for light detection and ranging. It is a remote sensing method that uses light in the form of a pulsed laser to measure variable distances to the Earth from an airplane. Think radar or sonar from a submarine. 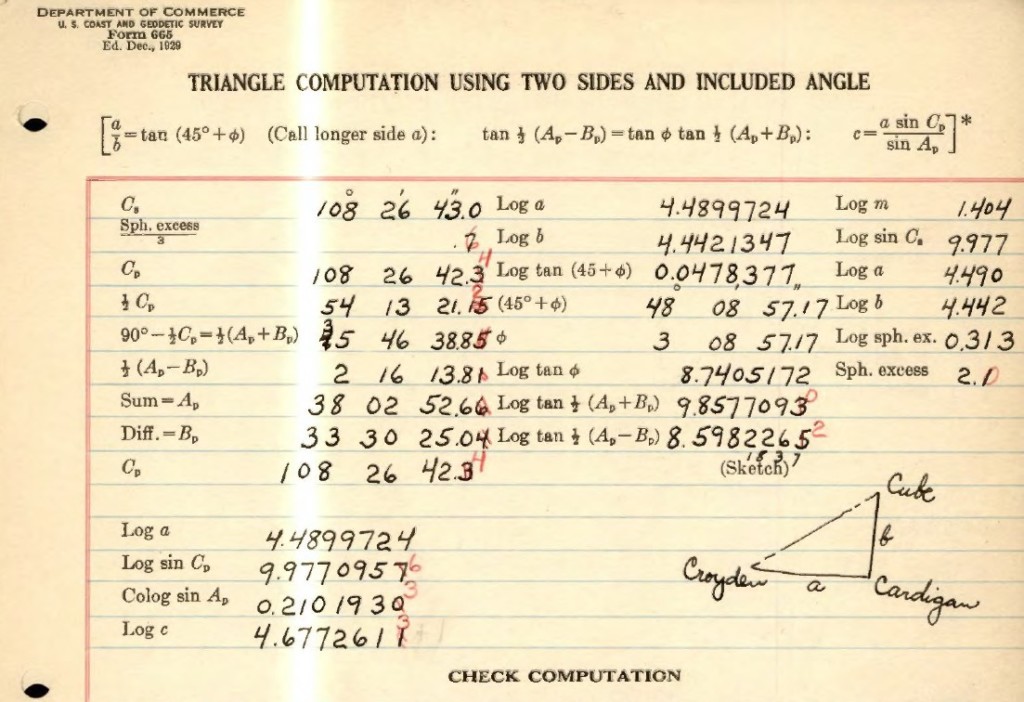 In 2019, a USGS aircraft equipped with LiDAR was used over the White Mountains to improve the accuracy of the old USGS Quad Sheets. This LiDAR imagery depicted an estimated peak elevation of 3,995 feet on the summit of Mt. Tecumseh. If this LiDAR elevation is correct, then Mt. Tecumseh would not be over 4,000 feet. To the chagrin of peak-baggers everywhere, this conflicting data now threatens to remove Mt. Tecumseh from the coveted list of New Hampshire’s highest peaks. Oh, the horror.

LiDAR accuracy is generally pretty good, but when the ground is obscured by heavy tree cover or other obstructions, it can vary. Also, the LiDAR pulsed laser blankets the ground surface in roughly a 2-square-meter (or 6 ½-foot-square) grid pattern, and there isn’t any way of knowing whether the pulse pattern hit the very highest rock peak or merely swept over it hitting all around it. With an undefined accuracy of plus or minus a few feet, maybe, just maybe, Mt. Tecumseh might climb back onto the coveted 4,000-footer list.

So, exactly how tall is Mt. Tecumseh and how best to settle the controversy? Is the 2019 high-tech LiDAR elevation of 3,995 feet more accurate than Quimby’s 1877 low-tech triangulation elevation of 4,003 feet? Enter into the controversy a group of volunteer surveyors from the New Hampshire Land Surveyors Association (NHLSA). The group concluded that they could backpack the cumbersome survey equipment to the top of the mountain and, with survey-grade, high-precision GPS units, determine the elevation at the very tippy top of Mt. Tecumseh. GPS-measured elevations involve high-tech triangulating off of orbiting satellites, solved using the same low-tech mathematical formulas that Quimby used, only today we calculate triangle solutions on computers instead of on scratch paper.

Ten surveyors from all over New Hampshire converged at the foot of Mt. Tecumseh one foggy morning to tackle this project. There is no access road to the summit so all equipment had to be backpacked to the top. The group of surveyors broke down into smaller teams to tackle different assignments, including recovering area benchmarks, occupying base stations, differential leveling, setting a permanent control point at the peak, and dispersing equipment to share the workload in hauling it up and hauling it back down the mountain.

While Mt. Tecumseh is not the most difficult 4,000-footer to climb, it isn’t a cakewalk either. It is approximately 3 miles from the trailhead up a steep, rocky trail with three water crossings and a vertical gain of some 2,200 feet to get to the summit. It takes about three hours and feels longer when you are carrying tripods, auto-level, survey rod, batteries, GPS receivers, antennas, drills, and other survey equipment, in addition to your necessary hiking and safety gear. And whereas hiking gear is designed to be lightweight and portable, surveying equipment is not.

By lunchtime everyone was on the summit and multiple GPS units were cooking away, bouncing signals off of overhead satellites and distant base stations taking a variety of measurements. With multiple units working independently, the opportunity for comparative analysis, corrections, adjustments, checks and double checks meant that our team of NHLSA surveyors had a high degree of confidence in the precision and accuracy of the final determined elevation. Our group measured the NAVD88 elevation of the summit of Mt. Tecumseh, rounded off to the nearest foot, to be … 3,997 feet. This puts it smack in between the LiDAR elevation and

Quimby’s triangulated elevation, and below the magical 4,000-foot cutoff elevation.
A permanent benchmark stamped “NHLSA – 2019- Mt. Tecumseh” is now on the top of the mountain denoting the summit elevation of 3,997 feet. This benchmark was set with the cooperation and assistance of the USDA Forest Service. Sorry, 4,000-foot-plus advocates and AMC 48 peak-baggers everywhere, but by our surveyed elevation Mt. Tecumseh is close but not over 4,000 feet and can come off your bucket list. Unless, of course, someone builds a 3-foot-tall rock pile on the summit. Either way, I’m not giving back my nifty little patch.