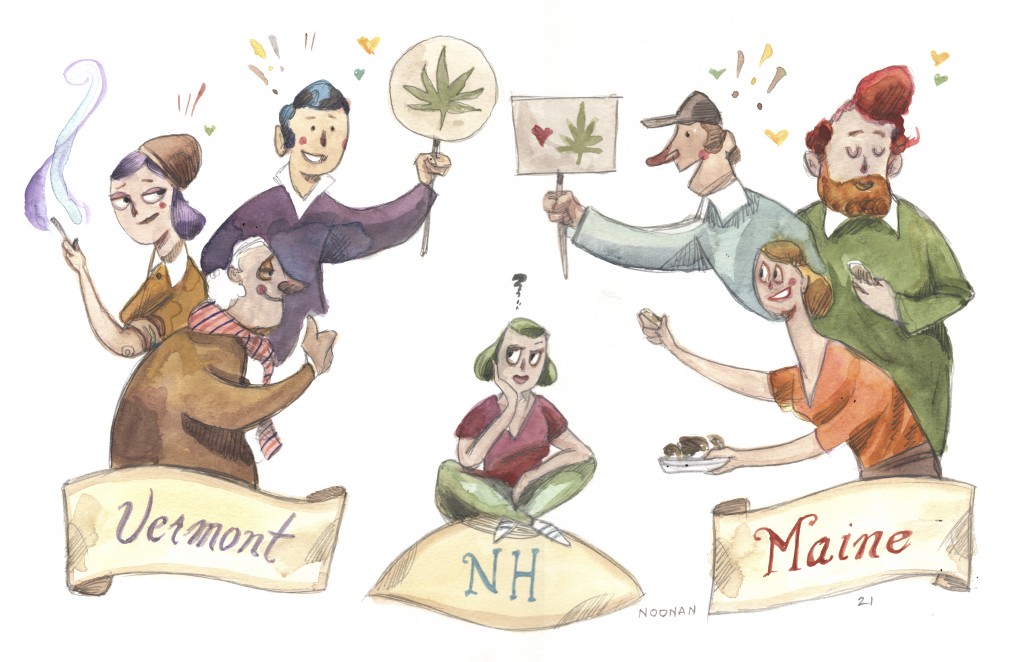 Love it or hate it, New Hampshire has long balanced its budget in a unique way. Instead of using a statewide income tax or sales tax, the Live Free or Die state collects money, as a Republican lawmaker once put it, from “booze, butts and bets.”

He was, of course, referring to the deals to be had at the state-run liquor stores, the lower-taxed cigarettes, and the nation’s oldest state-run lottery here in the Granite State.

The past decade has seen a remarkable shift in American public opinion about marijuana. Following the shifting politics and seeing an opportunity to raise revenues, lawmakers in some states have followed suit by legalizing marijuana — and then heavily taxing it.

Suddenly, 15 states have fully legalized marijuana for recreational use. In addition, every other remaining state — except Idaho and Nebraska — allows for marijuana to be purchased and used for medical reasons. New Hampshire allows for medical use of cannabis, but year after year, lawmakers in Concord reject the idea of full legalization.

New Hampshire is an island on the issue — we’re surrounded by states that have legalized the substance for recreational use. So, while residents of Vermont, Maine and Massachusetts continue to visit New Hampshire for cheap liquor, New Hampshire residents are leaving the state to buy legal marijuana.

There is no need to overthink the reason why pot isn’t legal in New Hampshire. It’s simple: No governor in recent times has wanted it legalized. This includes popular governors like Democrat John Lynch and Republican Chris Sununu.

Here is the thing: Given the local poll numbers, it’s sort of a no-brainer for any ambitious politician. The most recent poll found that 68% of Granite Staters wanted marijuana to be legal for recreational use, and that data is actually a few years old.

Yet, at the same time, not only is the current governor against it, many in the Statehouse are as well. The Concord Monitor found that of the 48 Republican and Democratic candidates running for the 24 State Senate seats last year, only 20 supported legalization.

Here is the thing: The politics on the issue in the state are complicated, especially philosophically.

As it turns out, marijuana is the collision point in a number of fault lines in state politics. When it comes to internal Republican politics, it pits social conservatives against libertarian-minded conservatives. Within the Democratic Party, the dynamic is more generational, but they are beginning to realize how they could spend new money from taxing marijuana. Indeed, the last two Democratic nominees for governor backed legalization.

At the same time, US Representative Chris Pappas, a Democrat, reversed his previous position to decriminalize possession of marijuana and went even further, backing employers’ rights to mandate drug testing for marijuana. It isn’t hard to see him facing a Republican who feels the opposite way next year and making a campaign issue
out of it.

I mean, this is New Hampshire. It’s hard to be all moral about the idea of having legal pot stores when the state puts liquor stores literally on the highway.