Knock, knock: New Hampshire comedians are ready for the laughs 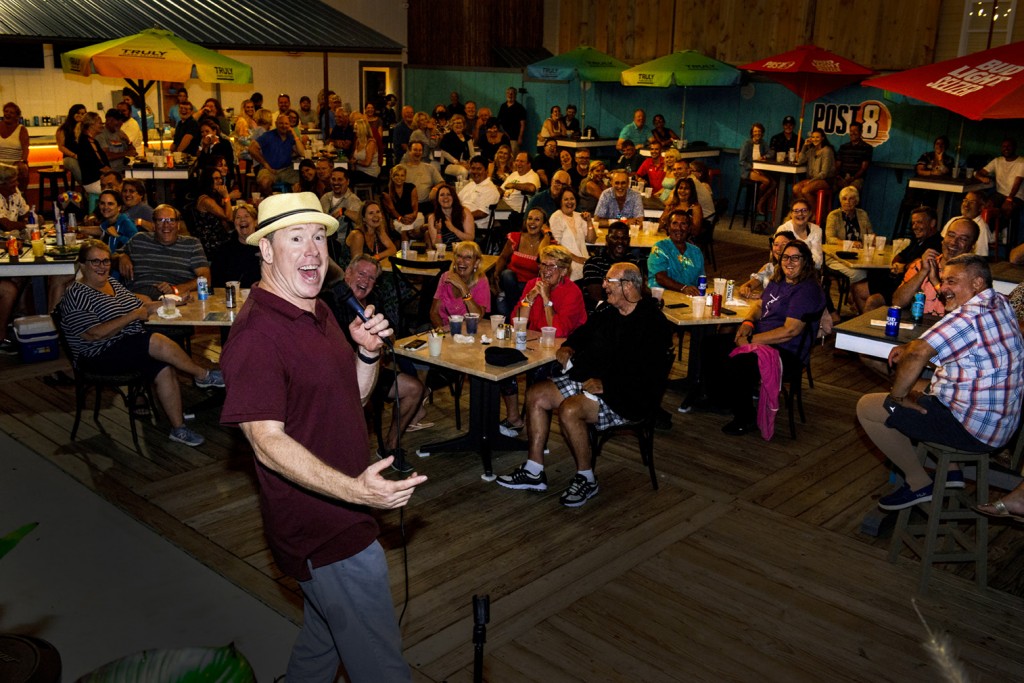 Dunn, founder of the Hampton Beach Comedy Festival, in front of a full house at McGuirk’s Ocean View Hotel.

Jimmy Dunn was onstage at the Hampton Beach Casino Ballroom a few years back, and things weren’t going well. He was part way through an opening set for southern rockers 38 Special, when a particularly critical patron rose from his seat, shouted, “You suck,” and whipped a cardboard table tent at him. “I don’t move,” Dunn says. “It went right by my ear. I go, ‘You know what? Maybe I do. Maybe I’m not the funniest guy today. But I have bad news for you — my little brother is the head bouncer of this establishment and you’re about to hit stairs 8, 11 and 17 on your way out to Ocean Boulevard.’”

“I said, ‘I have about 8 minutes left. Anyone else want to tell me how I’m doing?’” So maybe Dunn wasn’t funny that night. But that story is. And he definitely is — which is why he may be one of the best people to gauge the state of comedy in New Hampshire.

“In a word, I’m optimistic,” Dunn, founder of the Hampton Beach Comedy Festival, says of the state’s standup scene. “People are dying to come back out for laughs. Comedy is going to come roaring back, and I think once comedians realize people don’t want to hear Covid jokes anymore, that’ll be helpful. Everyone is doing the same first 15 minutes, and I learned quickly that people just don’t want to hear that.”

A little more than 19 months ago, rooms were booked, people were saying funny things into microphones, and New Hampshire was having a good chuckle. But then the pandemic came, and things weren’t quite so humorous.

“It put me right out of business overnight,” says Alana Foden, founder of Comedy On Purpose, which produces shows throughout southern New Hampshire. “But we are starting up again.” Foden started Comedy On Purpose, in part, to provide stage time for comedians learning the craft. Her formula: a group of 10-12 performers made up of three beginners, three intermediate comics, three top performers and a headliner to close the show.

Foden’s first 5-minute set took place at the Comedy Connection on a night hosted by the late Kevin Knox. Despite a strong contingent of family and friends who made the trek to Boston to support her, the nerves kicked in. “When I stood up, my brain sat down,” she recalls.

“I felt like I was going to be physically ill,” she says of catching the standup bug. “And then after, when I was done, I was so relieved. I couldn’t sleep that night. You go over it in your head — over and over again.”

That’s the challenge here in New Hampshire. Dunn, who has appeared on Letterman, Conan and was one of the stars of the CBS sitcom “The McCarthys,” found a creative way around that particular obstacle in his formative years.

“One of my first jobs was running one of those carnival games where you roll a ball and the little horses would run down the track,” he says. “I had a microphone and I used to heckle people. My favorite part was when they’d heckle me back.”

There were also nights spent sitting on the back steps of the Casino Ballroom, listening to greats like George Carlin give a masterclass on standup. He learned that to get good, he’d have to get onstage. Early on, he put 70,000 miles on his car in one year driving to gigs.

“I was lucky — I developed in Boston during the heyday,” he says. “To develop as a comic in New Hampshire is difficult because you just have to get onstage, and there’s just not as much stage time here as there is down in Boston. We have great bigger venues here like the Casino and the Colonial. But the smaller ones, the open mics, we don’t have as much of that.” 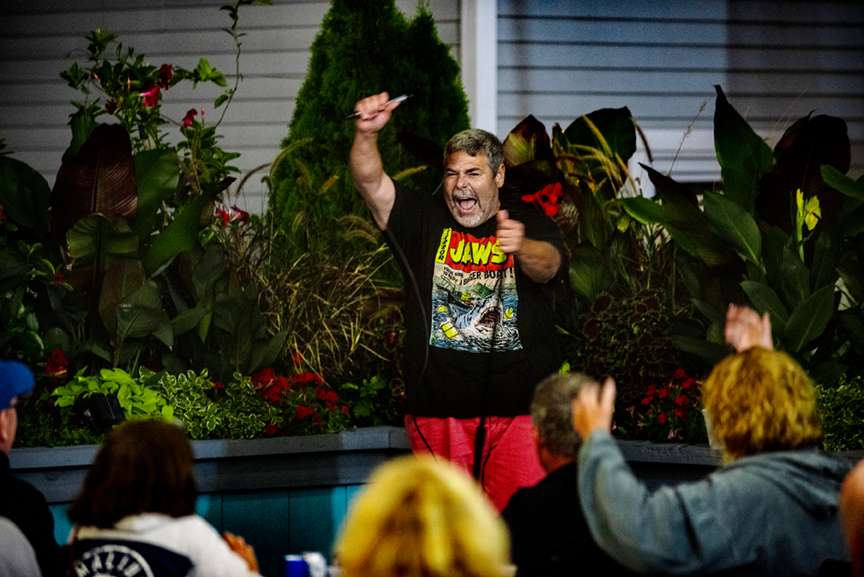 Those venues, which can be ideal for comedy, have begun to fill up again. The Rex Theatre in Manchester, where Dunn performed earlier this year, hosted an evening of stories with Lenny Clarke and runs a Friday Night Comedy at the Rex series; the Casino Ballroom brought in Sebastian Maniscalco, David Spade and Tom Segura; and Howie Mandel performed at Manchester’s Palace Theatre earlier this fall.

“The Palace is one of the best theaters I’ve ever worked in,” says Jim Roach, president of JJR Entertainment, responsible for booking some of the biggest comedy names in the region, including Dunn, Juston McKinney and Bob Marley. “The balcony there is designed so well. It’s right on top of the stage, as close as you can possibly get. The intimacy in that room is amazing. It’s a great, great room.”

So good, McKinney will shoot his third comedy special there in the spring. “It’s a great place,” McKinney says. “It’s a great venue to tape in. We’ve done it there before and the crew is familiar with it and it’s one of my favorite venues to perform at.” McKinney — who has performed on “The Tonight Show” three times (twice when it was hosted by Jay Leno and once with Conan O’Brien), starred in the Showtime special “Unsportsmanlike Comedy with Rob Gronkowski,” and had roles in “The King of Queens” and the films “Zookeeper” and “Here Comes the Boom,” among others — lives full time in Newmarket, which isn’t necessarily known as Hollywood East.

“People ask me, ‘Why aren’t you more famous?’” McKinney says, laughing. “I don’t know — but I have a hunch. I live where Walter White hid out from the feds on ‘Breaking Bad.’ I live where Ghislaine Maxwell hid out. That’s where I went to further my career.”

Jokes aside, it came down to quality of life and family, he says. He lived in Los Angeles for five years, but opted to return to his home state to raise his children. And while the location may add obstacles to building a career in the public eye, it can be done.

“For me, the biggest struggle about being in New Hampshire is trying to stay relevant and in the game,” McKinney says. “What Jimmy Dunn did was amazing — getting cast on a sitcom while living here. I can’t bank on that happening. That’s a long shot.”

But then the performer — constantly looking for what’s funny — who is never far below the surface, returns.

“My wife said to me that if we stayed in Los Angeles, we wouldn’t have had kids,” he says. “I told her we would’ve had kids, just not these kids. Maybe they would’ve been better than these kids.”

He also has good things to say about the comedy community in the Granite State. While it can occasionally be difficult to find stage time (McKinney runs a workout room for other comedians to hone their acts in Newburyport), it’s a fairly close-knit group.

“I think it’s a supportive community,” he says. “We all understand we’re going through the same stuff. I think there’s a bond there because of that.”

McKinney also says while there’s “no shortage of talent in this state,” there are people who help make opportunities for others.

“Jim Roach has been huge,” he says. “I started working with Jim after I was on ‘The Tonight Show’ with Conan O’Brien. He’s been a huge help for my career.” Roach also helped Marley — who peppered fans with daily online videos and kept working through much of the shutdown — string together a number of shows at the Colonial Theatre in Laconia, and at the Surfside just over the state line in Salisbury.

“The Surfside has tents outside on a deck,” Roach says. “Bob did 25 shows under the tent. And the thing about Bob Marley is he changes his show every time he comes back to a venue. Watching Bob from the first show at Surfside to the last show, every night it was a different show. Every night he was pulling, working and moving. The first show was completely different from the last show. I’ve never seen anybody do that. It was just incredible.” McKinney is shooting a special, Foden’s Comedy On Purpose nights are hitting their stride, and following his comedy festival, Dunn’s calendar is filling up quickly. According to the pros, it’s a sign that audiences want to laugh, and comics are ready to deliver.

“Comedians had a year and a half to write new jokes,” Dunn says. “And a lot did. I think it’s going to be fun. I forgot how much I missed it. Even the lousy gigs, and I did a few of those. It’s still better than being locked up in the house.” 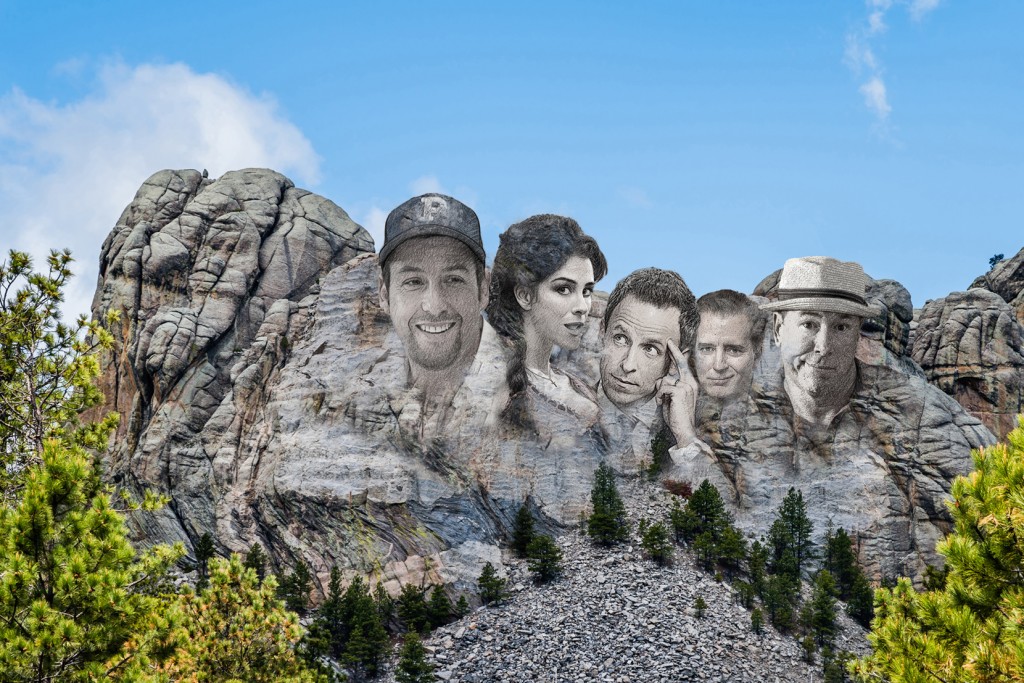 Maybe there’s something in the water, because there are some truly funny people who have called New Hampshire home over the years. When the Mount Rushmore of New Hampshire Comedy is finally chipped from frost-heave shattered asphalt there are some solid choices. (“We should put it where the Old Man used to be,” Juston McKinney says. “That’s gone, and people still go up there to look.”)

When he was in Manchester promoting his Crystal Head Vodka prior to the pandemic, actor Dan Aykroyd — who knows funny — offered his take on Adam Sandler’s place in the entertainment world.

“I want to go on the record to say that his gift is one of the greatest things to his generation,” Aykroyd said. “He gave young men a confidence to be funny and to be bold and to go out there in the world and make a mark with compassion and with heart. If you look at his movies, they’re full of heart and compassion and very, very funny. He’s one of my favorite contemporary performers, and straight-up empire builders. He keeps his friends working and everyone who works with him loves the experience. He’s truly one of the world’s comic giants.”

“Adam Sandler has to be right there in front,” Jimmy Dunn says. “Then Sarah Silverman and Seth Meyers. And Al Kaprelian. Then maybe me.” Dunn’s got a persuasive argument: He’s the only New Hampshire standup who has starred on a sitcom, written for a sitcom, and appeared on Letterman and Conan.

“Maybe sneak me in right on the edge,” he says.

McKinney also has a few thoughts on the nonexistent but probably very necessary monument to New Hampshire comedians.

“Those are the obvious three names,” he says of Sandler, Silverman and Meyers. “But here’s the thing — put me up there, because I don’t think Jimmy Dunn was born in New Hampshire. It’s like being the President. You have to be born here to be included. So, we’ll give Jimmy a statue in the parking lot of the liquor store down on the Massachusetts border.”