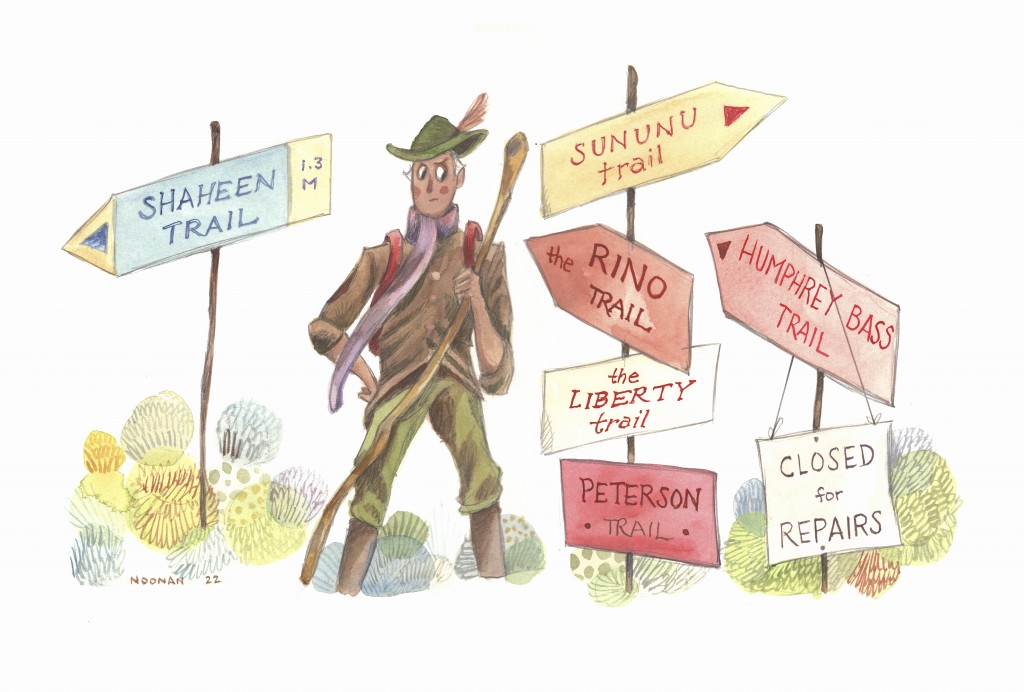 As political insiders know, being a member of the New Hampshire Republican Party doesn’t mean one particular thing. It’s something of an umbrella group for at least five distinct types. There are libertarian Republicans (think Rand Paul and the Free Staters). There are establishment Republicans (think the Sununus and Greggs and those who backed John Kasich or Jeb Bush for president in 2016). There are social conservatives for whom state Education Commissioner Frank Edelblut and Ted Cruz are leaders. And there are the Trumpers — the brash populists for whom the only actual leader, even locally, is the namesake.

Few Republicans fit neatly into a single box. Many establishment Republicans not only voted twice for Donald Trump for president but defend him. In this way, our multifaceted Republican Party is really no different from any other state party around New England or even the country.

What is different from the rest of the country and even from New Hampshire’s recent history, is what is going on with the state’s Democrats.

Being a New Hampshire Democrat today means being a centrist, cautious Jeanne Shaheen version. If one doesn’t subscribe to that version, there is no political hope or future unless they simply fall in line. There is no evidence to the contrary.

And this is a state that brought us campaign finance reformer Granny D, where a legacy of environmental activism dates back 40 years, and that was among the first to pass a bill legalizing same-sex marriage. It’s the state that gave birth to the liberal movement of Howard Dean and most recently voted to help Bernie Sanders win the last two New Hampshire presidential primaries.

Sanders, apparently, represents what our Democratic primary voters want when they turn out in big numbers but not whom they vote for in any other election in the state.

Consider this: Progressives have not won a major election in the state since Mark Fernald won the Democratic nomination in 2002, now two decades ago.

Yes, one can make an argument that Carol Shea-Porter’s win for Congress in 2006 was another example, though that race had a lot more complicating factors and Shea-Porter notably endorsed Hillary Clinton and Joe Biden in the last two presidential primaries.

So, whether it be Paul McEachern’s challenge to John Lynch in 2004, the lack of any liberal running for Senate in 2008, or the series of liberal challenges for governor against a Shaheen clone for governor in 2012, 2016, 2018 and 2020, progressives have nothing to show for themselves.

The frustrating thing for non-Shaheen Democrats is that three things are true: 1. Poll after poll shows a solid base of true progressives in the state. 2. This group shows where the party momentum is nationally. 3. There is more money in the political system than ever, allowing for liberal groups like Rights and Democracy to exist and organize.

And yet, progressives are not players in the same way that any of the types of New Hampshire Republicans listed above are in shaping state politics and their own party.

One glimmer of hope for this group: While Democrats largely bemoan the Republican-led redistricting process for congressional and statehouse districts there is a silver lining for progressives. The state’s 2nd Congressional District, currently held by Democrat Annie Kuster, is on track to change from a swing district into the third most Democratic in all of New England.

It means that Republicans may never stand a chance there again. It could also mean that the only election that matters is a primary where a progressive would be structurally advantaged. It could be a huge gift to the state’s liberals.

Farewell to a Primary Icon