What's brewing (and distilling) on the seacoast

I headed to Rollinsford and Dover on a recent winter day to see what was brewing. Or more accurately, what was fermenting and distilling. The area on the Maine border is sandwiched between the Salmon Falls River and the Cochecho River, offering the towns the advantages of water power at the height of the Industrial Age. The cotton mills built in Rollinsford in the 1820s kept active until the 1920s, but then the industry fell victim to changing times. Recently, the endurance of brick and mortar has invited new tenancy — a mix of small industry and artists have populated the mills, each appreciating the economical rates and the roomy, light-filled spaces.

Sharing hallway space with artisans in the Lower Mill is North Country Hard Cider. The operation was started in November of 2014 by Silas Gordon, his brother Ivan and head cider-maker Ron Dixon.

Silas likes to say he and his brother were raised “like a pack of coyotes” on a farm in Maine by a mother who let them run free. She fed them natural foods and imbued them with true hippie ethics.

What they received in return was a willingness to work hard and a dislike for additives. Hence, North Country Hard Cider is simply made from apples and yeast, and in a labor-intensive manner that yields the best results, according to Silas.

The trio buys freshly pressed apple juice from local apple orchards, adds an ale yeast and lets the combination ferment in a 238-gallon, stainless-steel tank for a few weeks. After fermentation is complete, the mix is transferred to another room where it is further conditioned by a racking method for natural filtering. Finally, the mixture is transferred again to a brite tank where carbonation is added — in all taking about six weeks for the final product. Additionally, one combination of just Golden Russet apples is set to age in oak bourbon barrels for three to nine months.

Silas claims it takes a lot more work to do it this way, but I must confess, the taste is outstanding. In addition to the extra care taken in cider-making, it’s the combination of apples that gives each variety its distinctive flavor. The first sip of their six available on tap that day was a revelation. Not too sweet, not too apple-y, North Country hard ciders have a clean and crisp taste with a touch of effervescence. 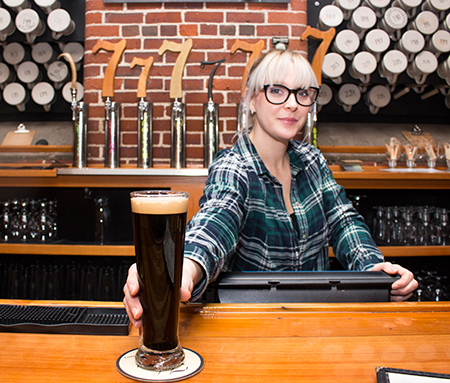 7th Settlement in Dover offers North Country Cider on tap along with a their own beers.

The Original Press is a combination of five to seven apples based on the season. Unlike some cider-makers, they don’t use antique varieties that were historically grown for cider. The Honey Badger is made with just Honeycrisp apples and is a tad sweeter. The Bitter Brothers Blend is barrel-aged and a bit more tart. The Ginjah Baby is infused with the flavor of ginger and cranberry while Northern Comfort, the sweetest of the lot, has the addition of mulling spices like cinnamon, nutmeg and orange zest. Finally, Fire Starter is laced with local habanero peppers for just a bit of warmth on the back of the throat, though the heat can vary depending on which partner is adding the peppers to the batch.

North Country Hard Cider has a tasting room in the front of their Rollinsford mill location. Hours are 3 p.m. to 6 p.m. on Thursdays and Fridays, and noon to 6 p.m. on Saturdays and noon to 4 p.m. on Sundays. Along with tastings, large and small growlers are available of the six varieties on tap that day, plus the Original Press is available in 12-ounce bottle four-packs. Several savvy Seacoast restaurants are offering their brews on tap, including Moxy, 7th Settlement and Leaven.

Unfortunately, there are no foods offered in the tasting room, but Silas is considering his mother’s popcorn recipe flavored with tamari sauce and nutritional yeast. He promises it is good. The apple did not fall far from the tree.

After a bite into a lobster roll from the morning visit to the Wentworth Greenhouses Farmer’s Market, run periodically on Saturdays in Rollinsford, I headed back towards Dover to visit Tall Ship Distillery.

No historic mill here, as owner John Pantelakos has a unit in a contemporary industrial park. Seems these metal buildings with high ceilings are perfect for adding a still or two, storage and an upfront tasting room. Tall Ship Distillery opened in August of 2014 after the painful process of acquiring equipment and solving logistics where John relied on his Yankee ingenuity rather than digging deep for cash. Stills from Tennessee can cost upwards of $100K for all that artfully crafted steampunk beauty, so he decided to build his own from a rather large sheet of copper, lots of solder and a port window from a ship. With his can-do philosophy, he devised a method to keep the still contents at the right temperature with a furnace and hot water tank. His equipment cost was a mere $25K, including the still.

John knew the mechanics of distilling, but he partnered with Matt Witham to bring expertise into the distillation process. Part history buff and part science geek, Matt has developed the methods and recipes for rum, the flagship spirit for Tall Ship. Rum is generally made by fermenting molasses, and in some cases, the dregs of the sugar-making process, but Matt starts with a half ton a high-quality molasses plus brown sugar to ensure better flavor and more consistent products.

On the back shelf of the tasting area, along with a few nautical nods to tall ship history, sit the four rums currently available at the distillery. The first product, a white rum, is called White Island Rum. No flavoring here, just a smooth spirit with a hint of sweet. Their Barrel-Aged Rum is aged in charred white oak barrels that give the rum a tawny color and a taste of caramel. Cedar Island Spiced Rum is ripe with the flavors of lemon, cinnamon and vanilla. Lastly, the Appledore is given a sweet touch with extra molasses. All except the Barrel Aged are available at NH State Liquor and Wine Outlets in 750 ml bottles for about $29. The tasting room is open Monday through Friday 10 a.m. to 6 p.m., Saturday 11 a.m. to  3 p.m. and Sunday 9 a.m. to 1 p.m. With a group, it’s best to make an appointment.

John and Matt plan on growing the operation — there is space next door to run pipes and distill more. The current pot still can be converted into a column still for the necessary filtering for a gin or vodka. Plans aren’t firm yet, but one thing is certain: The gin would be in the New American style, like Hendrick’s, with less pronounced juniper, and the vodka will be flavored. There are just too many simple gins and plain vodkas on the market already.

Five years after vacationing in the Caribbean and tasting local island rums, John is making his own rums, named after islands of the Isles of Shoals off the chilly coast of New Hampshire. It just took the imagery of a tall ship to make this dream, and second career, come true.

In nearby Rochester, Doug LaChance is making a naturally fermented cider on the family farm. Rather than add yeast, he allows the natural yeast, already living on the apples, to ferment the brew. The product also gets its carbonation naturally from the same yeast, allowed to remain after the fermentation cycle. After hand bottling, the yeast gives effervescence to the product while conditioning, much like traditional champagne.

Most Stump City ciders are the singular taste of one apple variety. Red Haze is made from Red Delicious apples and is wine-like. MacDaddy is made from Macintosh apples. A few are blended with several apples including the flagship Wicked Good. A few get their taste from amendments, including Wicked Winter with cranberries and a spring brew called Wicked Maple. The Wild Child is a very dry cider aged in a bourbon barrel. LaChance says Stump City ciders are more “apple-y” than Angry Orchard.

When apples are out of season, LaChance has been developing fruit wines, including Waumpauq, using sumac and red currants, and also a strawberry and rhubarb flavor. Production varies from fruit wine to apple wine to dry cider with an ABV ranging from seven percent to 14 percent.

Stump City ciders are available at 85 outlets throughout the state, mostly at beer stores, including Bert’s Better Beers in Hooksett, The Drinkery in Londonderry and Derry, and The Beer Store in Nashua.

Visit nhcraftspirits.org for a map to distilleries. Most are open for tours and tastings.