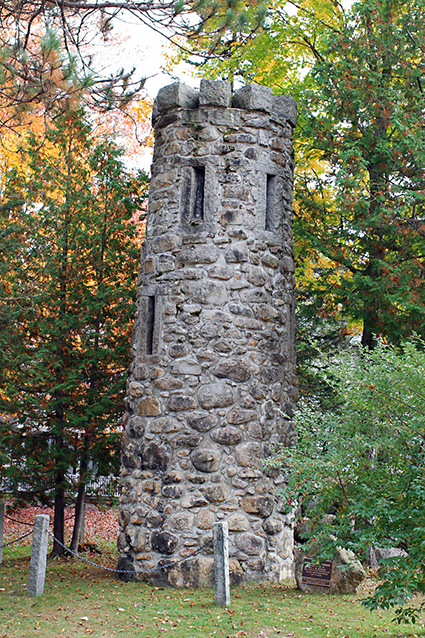 Yes, that’s a real stone tower, but no, it’s not authentic. At least not in the sense that it’s the remains of an actual castle. James Monroe Buckley had it built in an effort to “perfect” Waterville Valley. Photo by Marshall Hudson

I found myself wandering around Waterville Valley’s backroads one day, and stumbled upon a pile of rocks that was taller and beefier than most New Hampshire stone walls. It caught my attention. At first glance, it looked like a cross between a stone wall and an old above-ground stone foundation laid up without mortar. Looking closer at this pile of rocks, I discovered a most unusual aspect of the stonework — at one end of it there was a stone tower turret that you’d only expect to see on a medieval European castle.

The tower was probably some 50 feet tall and had the long, narrow defensive slit windows that provide maximum protection when firing down on attacking enemy forces. Or, if you’re more romantic, this would have been a perfect tower from which Rapunzel could let down her golden hair. “Rapunzel, Rapunzel, let down your hair, so that I may climb the golden stair.” Sadly, there was no beautiful blonde-haired princess up in the tower waiting for rescue. 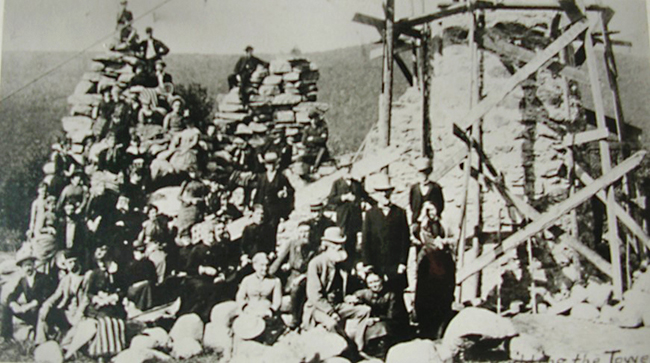 The tower was constructed in the 1800s at Buckley’s behest. Inspired by his travels in Europe, he thought no town could be complete without a proper castle ruin.

It appeared that I’d found the remnants of what had once been a fair-sized stone castle, or fort, or church, or something. It seemed like an odd and out-of-the-way place for any of those options, but then who knows? Perhaps the first European settlers in the area had built a stone fort for protection against Indian attacks instead of the more customary log-style fortifications? The population base in the area seemed unlikely to ever have been large enough to have erected and supported a stone cathedral, but maybe they had a wealthy benefactor? Or perhaps some eccentric and rich guy had wanted to live in a castle, so he built one in the middle of nowhere? I decided to look into this unusual stone tower.

It turns out that a Methodist Episcopal minister named James Monroe Buckley had spent time in Waterville Valley during the middle to late 1800s. The Rev. J.M. Buckley was a highly educated and well-traveled man. At different times he had been stationed as a preacher at churches in Detroit and Brooklyn, among other places. He was an influential minister and the editor of the New York Christian Advocate from 1880 to 1912. He wrote several books and was referred to as a “minister of ministers.” He founded the New York Methodist Hospital after a church organist died due to inadequate hospital care. 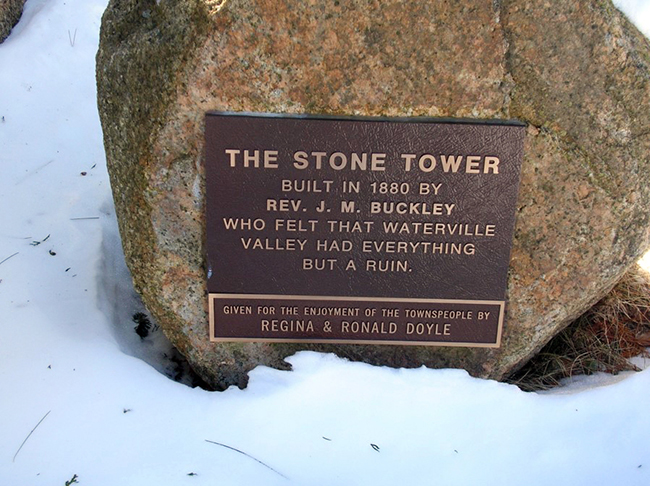 The mystery of the ruin is revealed by the plaque located near the tower’s base. Photo by Marshall Hudson

In his travels around Europe and Asia, Buckley had seen numerous castles and castle ruins and was fascinated by them. At some point, Buckley concluded that the town of Waterville Valley was almost perfect. It had nearly everything, but sadly lacked, in his opinion, a good castle ruin. The solution to Buckley’s problem was quite simple — go out and build a new old castle ruin site. And over a period of several years in the 1880s, he did just that.

It must be nice to have the time and money to build ruins that serve no particular purpose merely on a whim.

How to find it

A lot of the thrill in finding these sites is in finding the sites. Turn off your GPS or cell phone, look at old maps, use some deductive reasoning, talk to the locals, and go exploring. Explorers should always stay off private property and private roads without permission.

As an added clue, the Stone Tower is located on land owned by the Town of Waterville Valley.