Vermin Supreme, the protest presidential candidate who has fought for “mandatory dental hygiene” in every New Hampshire Primary since 1992, continues to cement his status as a pop culture icon. Along with his giant toothbrush and trademark rubber boot helmet, he’s now featured in the latest set of Topps Wacky Packages, collectible stickers that spoof consumer products and cultural trends.

The bearded Supreme, who also calls himself the “President of New Hampshire,” is caricatured in the 50th anniversary edition of the stickers along with these other famous animal-themed Internet memes:

Supreme said he was “tickled pink” by the tribute, noting that he used to draw his own Wacky Pack-style products when he was a kid (one of them was “Vomit” brand cleanser instead of “Comet.”) He added that he had no advance notice that he was going to be immortalized as an animal cracker.

Topps does not inform the subjects of its stickers beforehand. The company includes this disclaimer on every wrapper: “We hope you enjoy this parody product! The products we are spoofing – including our own – are all good ones. No kidding.”

The Vermin Supreme sticker was created by cartoonist/author Mark Parisi, best known for his “Off the Mark” one-panel comic strip and the children’s book series “Marty Pants,” the cartoon diary of a “misunderstood” middle school student. Reached by phone, Parisi revealed that he was a middle school and high school classmate of Supreme’s in Gloucester, Mass., and thought of him instantly when he was assigned to put a modern spin on the original 1967 sticker spoofing Nabisco’s Barnum’s Animals Crackers.

“One of the caged animals in the original was a zookeeper, so I thought I needed a person in the updated version,” said Parisi, who has been a freelance contributor to Wacky Packages since 2010. “Vermin’s name made him a perfect fit. And he’s no longer only someone that I knew in school, so it’s not an inside joke.”

Compared to its inaugural set, today’s Wacky Packages have become far more political, a trend very visible in Parisi’s work. The 1967 version of “Crust” toothpaste focused on its garlic flavor and recommendation for kids to brush only twice a month. Parisi’s update is “Upper Crust” toothpaste that’s meant only for the wealthiest 1% of the population and fights economic reform along with cavities. The cartoonist’s modern spin on “De-Mented” Brand tomatoes (Del Monte) has a monster GMO tomato attacking its would-be eater.

Back to local politics, Supreme has a tradition of pandering to Granite State voters. After filing his 2016 candidacy papers at the Statehouse, he boasted to New Hampshire Magazine that he was the only presidential hopeful with a plan to rebuild the Old Man of the Mountain. 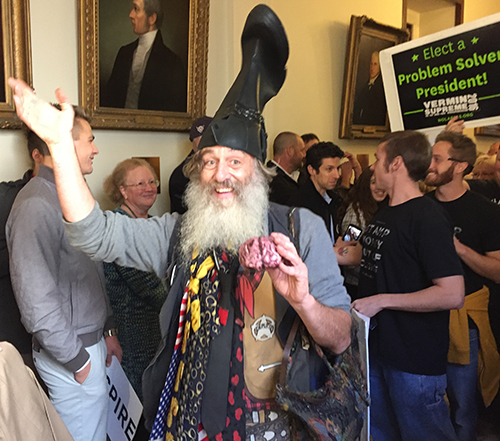 In November 2015, Vermin filed his papers to be on the NH Primary ballot. Here, he's carrying a plastic brain to taunt Republican presidential candidate Ben Carson, a celebrated brain surgeon, who filed his candidacy on the same day.

“We are going to make him 10 times bigger in the same location,” he vowed. “It will be a secret lair where I will run the government of New Hampshire and, subsequently, America. The new Old Man will be one that is breathing fire and shooting lasers out of his eyeballs. This giant mutated Old Man of the Mountain will keep New Hampshire safe from every other bordering state. He will also vomit glitter all over Vermont.”

Supreme says he considers the Wacky Packages tribute to be his biggest pop cultural thrill since 2012, when he discovered his image on the back page of “Highlights,” the children’s magazine commonly found in dentist’s offices.

“It was one of those ‘What’s Wrong With This Picture?’ drawings,” he recalls. “And it showed a crazy guy in the corner with a big bushy beard and a boot on his head carrying a toothbrush. That’s when I first knew I had broken through in a major way. Being a meme is both amazing and humbling. I’m always surprised where my image shows up.”