Try Curling in the Granite State

An Olympic sport fit for people of all levels and experience? Sign us up! 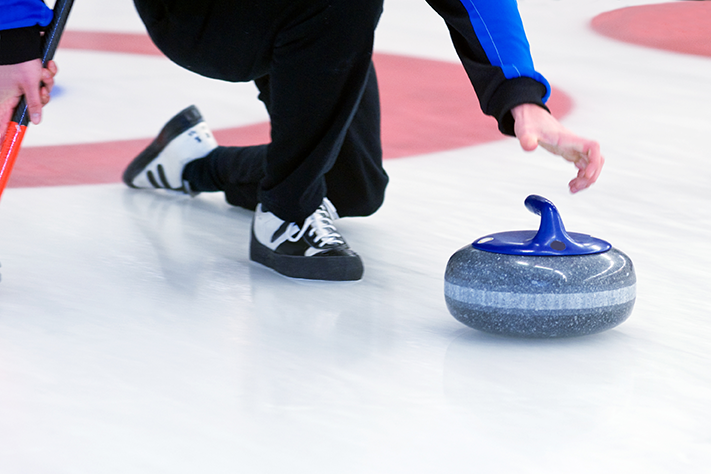 While the Olympic sport of curling originated in Scotland, it has since spread worldwide – including across the Granite State.

For those who bite their nails while watching the downhill slalom, or hold their breath as figure skaters complete jumps seeming to defy gravity, curling offers a calm alternative. Largely free of injuries, it has been dubbed “chess on ice.”

Curling is generally played in two teams of four players each. The team consists of a lead, second, third and fourth. One person takes on the role of “Skip,” with responsibilities such as planning strategy and taking the last shot in each turn. To play, each team member slides two stones, trying to get as close as possible to the other team’s “house,” or target. Other team members sometimes sweep the ice in front of the stone to help direct it. One interesting aspect of the game is that players themselves tally their score. The goal is simple: get as many points as possible in ten rounds, or ends. Teams can concede earlier if needed.

Getting the last throw is a big advantage, as stones can move and bump into each other each time a shot is taken.

For each turn, the curler pushes off the hack, sliding across the ice and releasing their stone by the time it reaches the hog line. It then travels towards the house, possibly with some sweeping assistance, and lands.

Each end can only have one winner. Intuitively, it is whichever team gets more points. The team receiving no points then receives the “hammer,” or last shot in the next end.

For many, the most perplexing part of curling is the players’ secret weapon accessory: a broom. Sweeping the ice in front of the stone’s trajectory helps alter the friction level and improve its path.

According to the World Curling Federation, curling was first found being played in the Netherlands and Scotland in the 16th century. It didn’t make its entrance in the Olympics for a few hundred more years, debuting in 1924. Various competitions and tournaments began to take place, until curling was a household word. At least once every four years, that is.

Similarly, curling has roots at Nashua Country Club as early as 1928. While players originally braved the outdoors, play moved inside in 1941. Six few years after this, they switched from natural ice to artificial ice. Each roughly 40 lb curling stone used is made of durable Scottish granite, from an island that some believe resembles a curling stone itself.

The Merrimack Valley Curling Club includes all levels of curlers, united by the goal of enjoying their beloved sport. All are welcome at their rented ice space within the Nashua Country Club.

NHSCOT and the Mount Washington Valley Curling Club held two “Learn 2 Curl” sessions at the Ham Ice Arena in Conway Village, where people learned about curling skills and history. Following this, they’re also hosting a miniature Olympic curling league next month, where eight teams will vie for the gold – and bragging rights.

The upcoming Wolfeboro Winter Carnival, which is free and takes place March 3, will include a curling open house. The Lakes Region Curling Association will demonstrate and explain the sport, such as the two different delivery options: classic crouch and slide and standing delivery using a “delivery stick.” All equipment is provided, and participants need only bring a pair of clean-soled shoes.

The Lakes Region Curling Association also hosts a winter league, which runs from January through mid-March at the Pop Whalen Ice Arena in Wolfeboro on Sunday evenings. The league is open to participants 14 and over of any skill level, and can be entered as an individual, partner, or team. All necessary equipment is provided.

Some colleges in the state also have curling clubs or teams, such as the Plymouth Rocks Curling Club (PRCC) at Plymouth State University. They have two leagues, including one led by instructors for novices who have limited experience, and/or have attended a learn-to-curl open house. They’ll also host two open houses next month.

As the Olympics wrap up, you may be thinking to yourself, “It’s my time to shine.” Grab a pair of comfortable shoes and hit the ice – you’ll be a pro curler in no time!

Categories: Things to Do, Winter Sports

Tune Up Your Skiing